My Little Pony: Friendship is Magic

Hey, it was only a matter of time before someone made this.

i dont watch the show anymore

I used to watch it, but before long the connections/ripoffs to Bionicle were getting so extreme…

And the episodes got lame. Too much fan service.

Can I get a flamethrower in here so I can burn this show to the ground?

There are no rip-offs, connection sure, but sharing a few plot-points a rip-off does not make.

I only saw some of the episodes, personally, I love to make crossovers with this franchise. (Halo and Bionicle, don’t kill me)

@pikminjake
Chrysalis, Queen of the Changelings(voiced by the same voice actor of Roodaka) attacks Canterlot. Sounds familiar. At Canterlot, a pony is getting married, Shining Armor(Voiced by the same person that voiced Jala) who is the captain of the royal guard. The six elements of harmony face off against the horde of changelings. One question, Where’s Keetongu and Sidorak. Even Makuta made an appearance as Sombra. And i’m pretty sure Rarity(one of the elements) was voiced by Nokama’s voice actor

The voice actors are just a coincidence, but this: 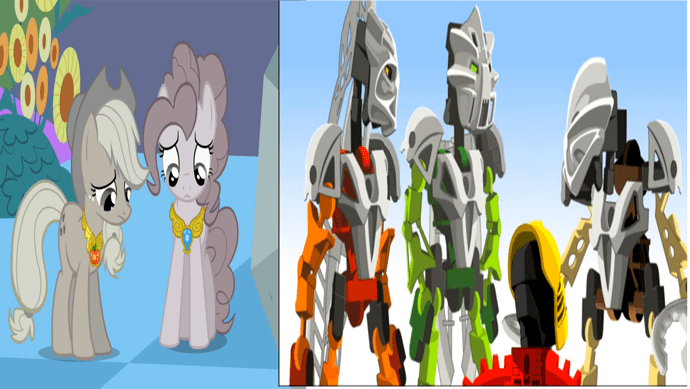 Losing their elements the exact same way felt too coincidental for me.

Can’t wait for next season!

Becaude BIONICLE was the first story to feature the protagonists losing their powers as a plot point.

I was wondering when an MLP thread would get started.

Too much fan service.

All fandoms have their gross sides. All you can do is tolerate it.

It was the fact that they also turned grey.

I don’t truly believe it was a rip off, I just find it too coincidental.

Watched two episodes and decided that it’s a show for little girls.

No hate though, we all have our opinions.

Anyone watch FimFlamFilosophy’s videos? He does some nice MLP parodies.

I have a friend who has watched all four seasons, not only do they have voice actor but same concept and idea (in a way) like pikminjake’s picture he posted. We have 6 characters, all different “elements” but unlike Bionicle MLP has multiple enemies, my friend said it was a good show despite the setting and I started watching it and I have seen multiple characteristics.

She voices a lot of characters.