My Take on Skull Scorpio

So, the summer wave sets have been out for a few days, and like a lot of people, I’m not a fan of the Skull Scorpio set. I’ll applaud the designers for attempting to put a cool technic function into what is fundamentally a CCBS set, but while the function is cool, the set is just awful to look at static. Worse still, Skull Basher does a much better job at having a unique function without ruining the look. In fact, I’d argue that even Loss does a much better job at it, although he’s fundamentally technic with some CCBS thrown in around the edges.

So, being the sort of person who much prefers displaying their sets in cool poses over making them smash each other in real time, I decided to revamp Skull Scorpio. I wanted to keep the original look and feel of the set, minus the bulky tail contraption, but my take on Skull Scorpio would be far more posable. Apart from the Tail, the body has the same proportions as the original set, except in that it is slightly longer 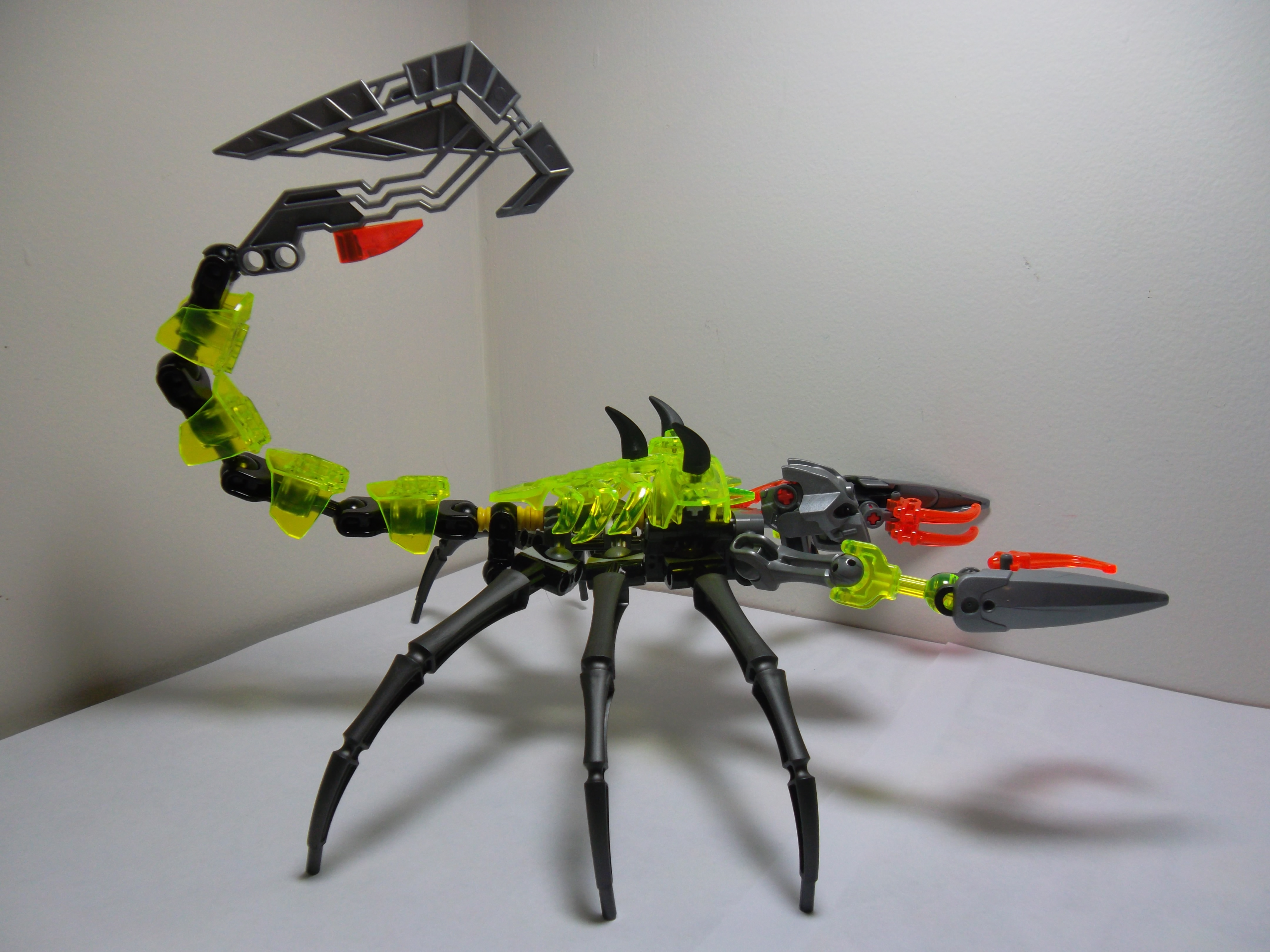 From the side the differences become more apparent. The tail is a simple CCBS contraption, which isn’t exactly imaginative but looks miles better than the original. 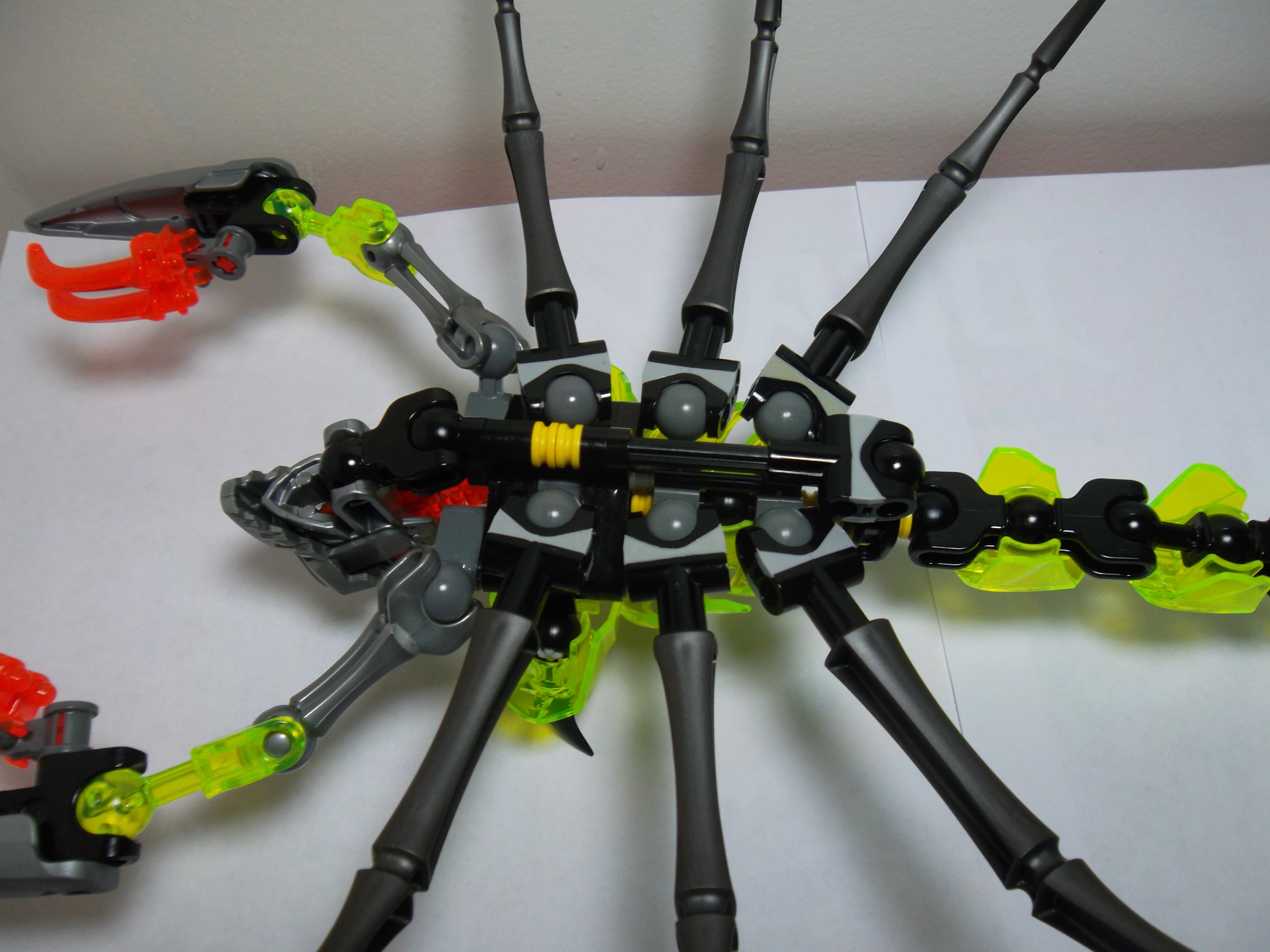 From this angle, the body build becomes more apparent. The ball joints to which the legs attach are actually Metrutoran arms, stuck on an axle that has been rotated 45 degrees from standard. Thanks to a minifig staff piece running through the center of the torso, they don’t wobble at all. The legs are also not pushed out any further than they were on the standard set, and can articulate in all directions. 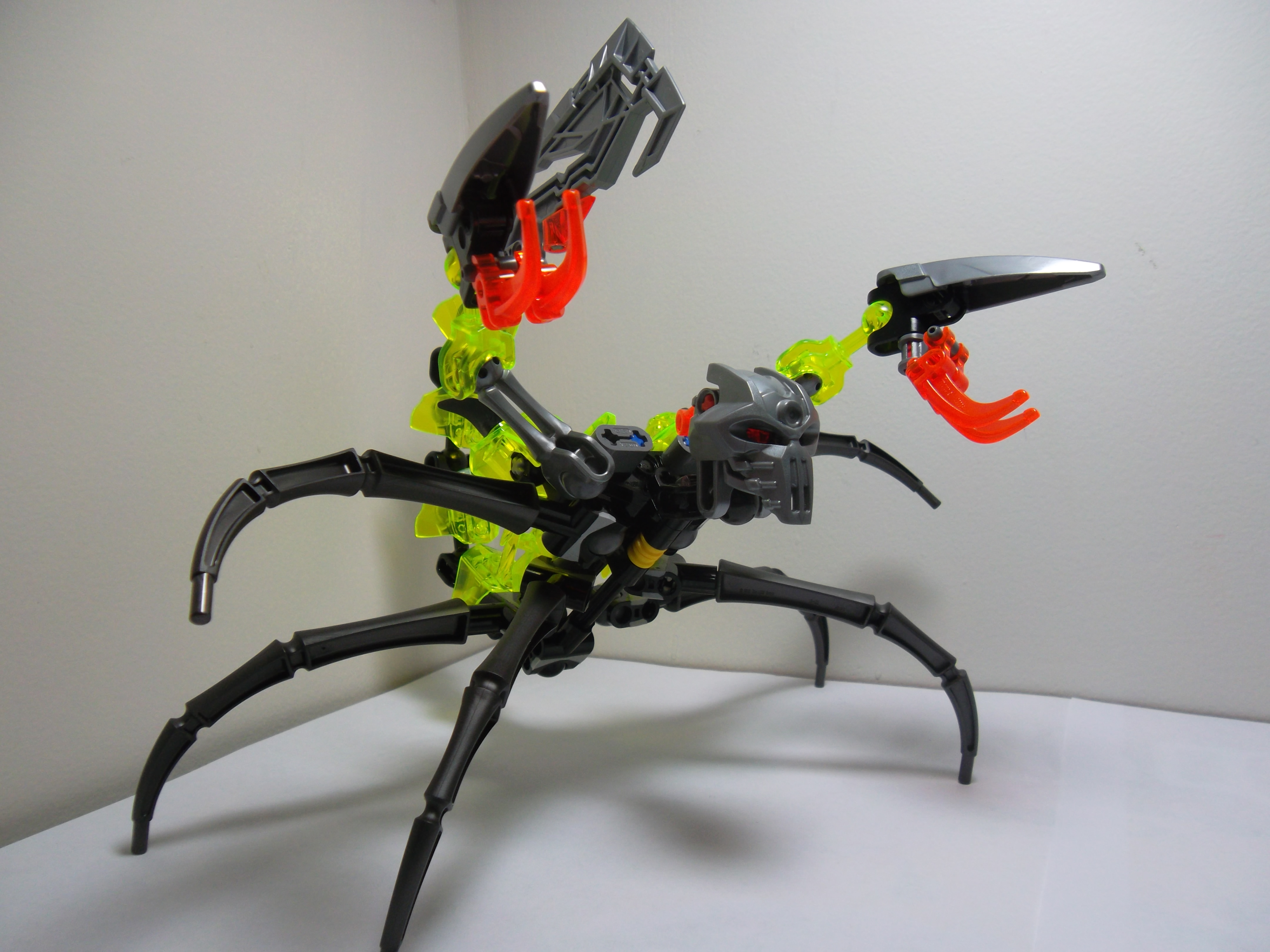 Showing the strength of the legs, Skull Scorpio can actually rear up now, bringing his head up to roughly the height of a protector set. This is probably my favorite pose because of it, since it makes Skull Scorpio look far more menacing. 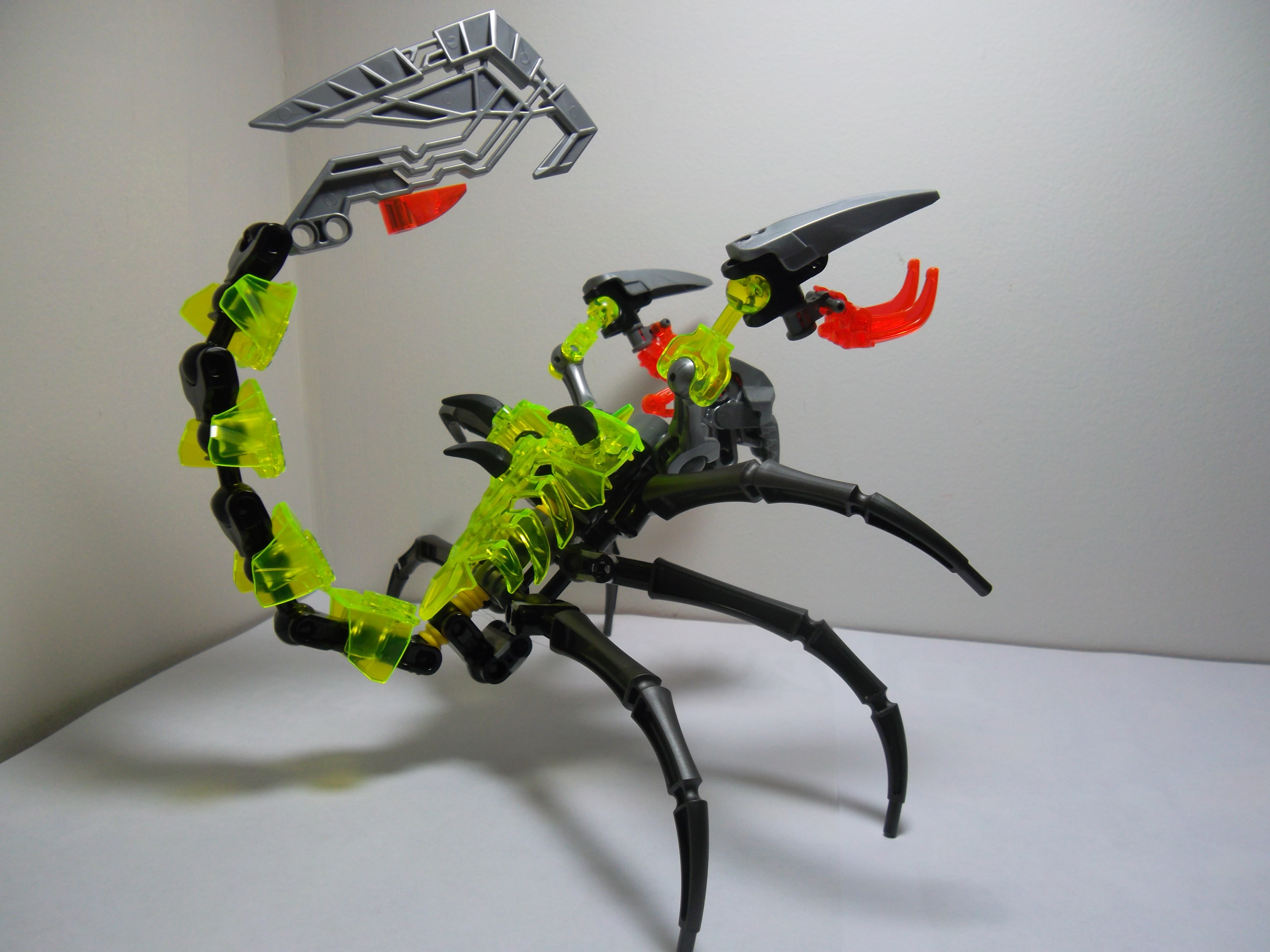 Even with two of his legs not touching the ground, he can still stand up fine. In fact… 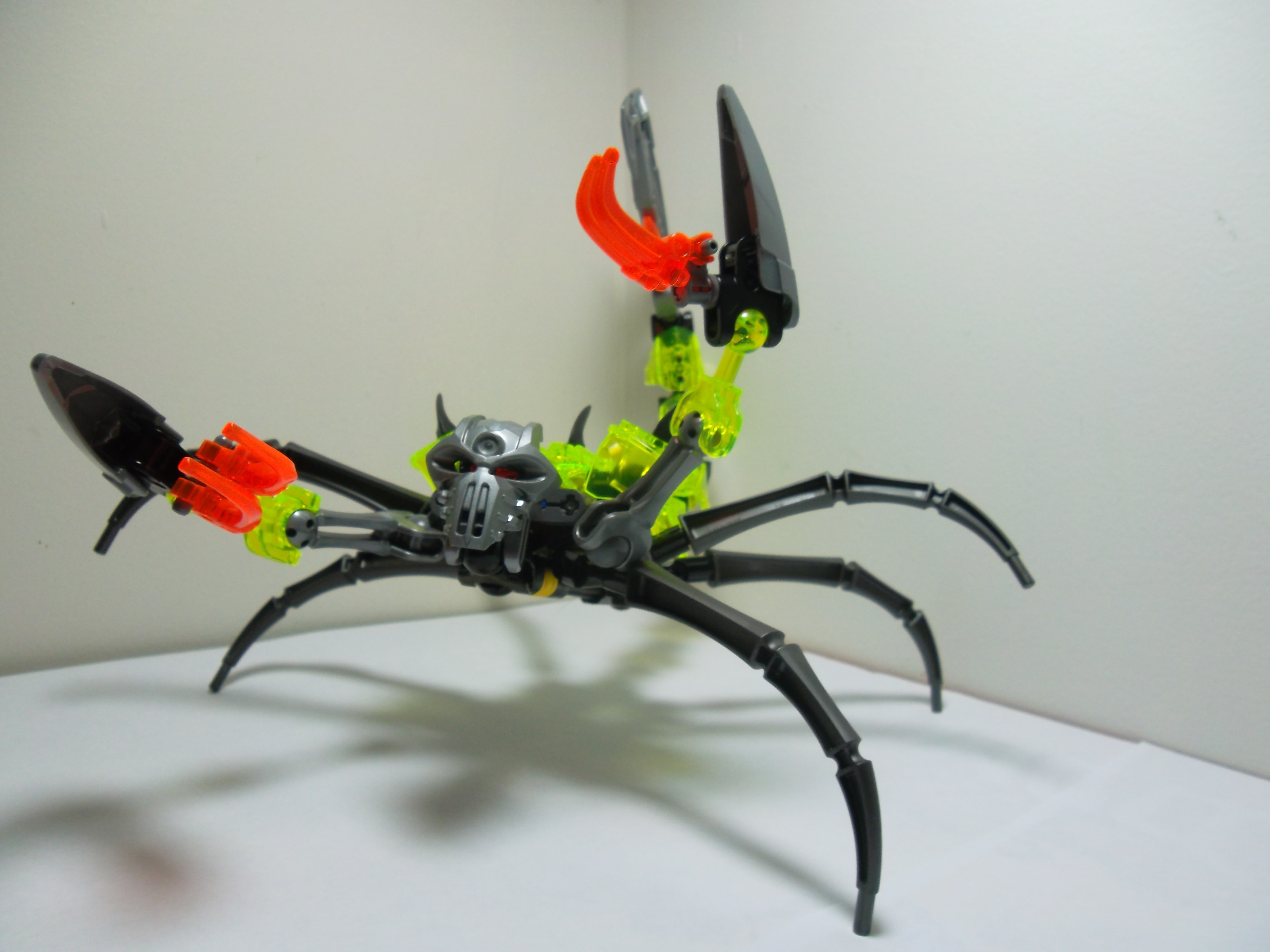 …he can even stand up on three, if properly balanced. Dance, Skull Scorpio, Dance!

Comments, questions, suggestions? How would you rebuild Skull Scorpio, or do you think the standard set isn’t that bad. Discuss!

if you could have incorporated the tail function it’d be perfect, as it is though, really really good man

My word if that isn’t cool!!
I love it! This is what the set should’ve been!
Can I buy this from you? How much will you charge?
JK

I love the poseable legs, that was definetily something Scorpio needed. I do miss the tail’s function, though.

so cool! i think that if you incorporated a striking tail function like the one Jangbricks did it would be a perfect revamp!

Sliver head stands out too much
Would look alot better with the trans greenish yellow mask
But i can understand if yu don’t have it,thought.
Otherwise it looks great.

Well, it’s better than the official set. Who else thinks that skull Scorpio is going to be known as the worst set of bionicle g2, kind of like good guy in bionicle g1.

Thanks guys! I may make a version with a tail function built in.

The added transparent pieces, the legs, and tail all look really cool! 10/10 If you want to add a tail function, you could make something like the top of grinder/scorpio combo’s staff and add it to your moc.

I really like how the legs are more movable.

That MOC is really amazing!

I like what you did here, but I am a bit sad that you removed the function. Perhaps you could have revamped the function to make it more like a scorpions?

…I do miss the tail’s function, though.

…i think that if you incorporated a striking tail function like the one Jangbricks did it would be a perfect revamp!

…If you want to add a tail function, you could make something like the top of grinder/scorpio combo’s staff and add it to your moc.

Fear not, bretheren! I have heard your cries!

http://orig15.deviantart.net/2569/f/2015/218/0/0/skull_scorpio_revamp_v_2_2_by_scorpion_strike-d94inag.jpg
As you can see, the tail is now a technic construction, but a far less obtrusive one than the original set. Through the use of individual ball joints, the CCBS clamshells have been retained.

http://orig00.deviantart.net/de29/f/2015/218/c/6/skull_scorpio_revamp_v_2_3_by_scorpion_strike-d94in9f.jpg
Although the new tail is quite a bit heavier, Skull Skorpio can still rear up as always, ready to scare the bezeejers out of any protector foolish enough to stand in its way.

http://orig06.deviantart.net/13e9/f/2015/218/0/a/skull_scorpio_revamp_v_2_4_by_scorpion_strike-d94in7l.jpg
From this angle, the rubber bands are more visible. They allow the tail function to work without making the whole contraption unnecessarily bulky or ugly. I made a version that also included articulation at the base of the tail, but it made the function difficult to use.

Speaking of the function…

Although I couldn’t go full pelt in the video since my other hand had to hold the camera steady, suffice to say Skull Scorpio can now strike pretty darn hard. As the tail swoops overhead, the two blades on the end chop down in a kind of “V” strike, hopefully hooking onto an opponent’s mask to tear it right off.

I’m rather proud of this one, actually…

Now that just made it 100% cooler. Good job on the function!

Too bad Lego didn’t do this, it would have improved Skull Scorpio so much!

could you please do “lets build” or just a simple bunch of pictures in step format to show us how to make this as perfect as you have? it would be so helpful

i really want to be able to use this in hand