I’m not sure if anyone’s already done a topic on this, but anyways.

What would you all like to see, a Brand new batch of toa being added to the story in 2016, or would you prefer upgraded versions of the toa like they did in 2002(except of course a little more detail and originality)

this isn’t supposed to be a topic on what you think would happen, but more so what would you rather happen.

I really want new Toa instead of upgraded mata. Why? My only reason is b/c of masks.
IMO if we get new Toa, we’ll get some more original masks.

New Toa, hopefully with new or at least different designs, ALA Toa Metru, preferably. There’s some clever diversity with the current kits, but in retrospect, the Metru were the best Toa build.

Personally, I would prefer new Toa, because it would mean they would be much more original, and maybe new elements.

Gonna move this to Bionicle discussion, as I think it fits there a bit better.

As it is I guess it depends on how well they can develop the current Toa. If they don’t do it well, I doubt they could make a new Toa team that’s fleshed out enough.

and the Toa Nuva are awesome…

Given they would end up likely being upgraded Toa, as I’m sure they mentioned the idea of sticking with the main team, I’d want to see them either mutated or given a theme that drastically alters their appearance.

I’ve joked about this prior with members, however given the new Star Wars pieces and seemingly ‘smooth’ leg pieces, I would be interested in seeing the Toa get a sort of ‘environmental suit’ to explore other locations. In essence a combination between the Bionicle Exo Suit, Bionicle Mahri and the Hero Factory XL sets.

Which would result in something like this, just using a lot less pieces; 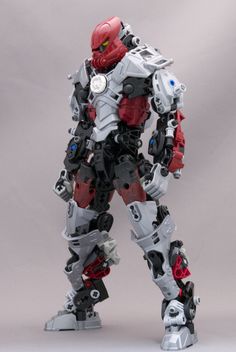 This could allow for new masks, new armour pieces, larger sets and emphasise the idea of adding to the sets to improve them.

In addition, worried new Toa at this stage would be pointless, given we barely have enough character development to account for these Toa, let alone an entire new team who would all need development.

That’s one of the bigger things that made g1 good in my opinion, the fact that there were more heroes to do different jobs in the GSR.

I want new toa, because of the hope for a green kakama. The new toa would probably have new masks, but i can hope.

How about both? q:

I want new toa, but we’ll probably get upgraded toa, I at least hope they save the upgraded ones for the other half of the year

I want upgrades, G2 is focusing more on character(and by extension story) than world building, so the writers really need to flesh out the new team, at least for the initial 3 year run time.
after that, whatever, a new team if it’s necessary.

@The13Inquisitor In bionicle’s first run, i totally agree, i love the metru build its the perfect balance between function and posability.

@Kahi sorry, i don’t use the boards very much. my bad.

Definitely new Toa. The current Toa already look pretty sweet… If they did upgrade them, it better look better than before (which will be hard to do).

For now, let’s stick with the same six heroes. I really hope the new Bionicle follows the old pattern with changing the team every two years or so. But if they keep the same team, as @Scarilian said, they need to be upgraded so that we don’t just get the same set with some new armor slapped on.

I highly doubt that Lego will create upgraded Toa in 2016.

Well, that depends. If BIONICLE only runs for 3 years as is currently planned, I think adding a completely new team of Toa would be rather pointless as we would not be given the opportunity to explore their characters all that much before moving into the “Final Battle.”

On the other hand, if it ends up running longer, I think a new team of Toa should be mandatory. Hero Factory ran for almost 5 years and featured a total of 9 protagonists, 2 of which disappeared in its fourth year. It ended up feeling very dull by the end of things. Obviously, adding a completely new roster of protagonists every year would end up making the cast feel far too cluttered, but every 2-3 years a new team should be introduced, yeah.

I think that they will just upgrade the 2015 Toa in 2016 like they did from 01-02. But I think that a new team should be introduced every couple of year like G1 did because the same team would just get too repetitive and kill a lot of the interest in the line.

But then again, what do I know?