Hey all,
I figured a topic should be made to discuss the 2016 Ninjago sets (And then point Nekchir to it back on Eurobricks so he can share details

CMFs are listed only under one set number, so no. Doesn’t rule out the possibility and high probability of a series, though.

I have some bad news for you about Nekchir…

I have some bad news for you about Nekchir…

What? We all know he’s trolling.

Back on discussion, I’m guessing that those untitled Ninjago Movie sets were supposed to initially release next year, but since the release date for the film got moved (Original Date: 2016, Moved Date: 2017)
The Movie set release date will be pushed back too, if I’m correct. This explains the lack of regular sets, as the slots have mostly been filled with Movie sets for next year.

Unless you are sleeping or something, can you give us some Ninjago leaks?

Typin’ them up on EB.

Okay sweet! make sure to post them here as well please.

General facts - boxes are red and have Jay on them. Main collectable this time around appears to be some sort of dragon sword. New hilt with a stud on it (appears to have a cartoon ninja face) and two axe blades, those energy blades. The minifigures look the same as the summer ones but with a new shoulderpad and new torso prints.

70599 - Small brick built dragon, brown, sand green. Minifigures are Cole and a pirate with a green bandana, orange and brown outfit, and a new sword.

70600 - Two bikes, one for Kai, one for Nya. Nya’s in her Water Ninja outfit, holding one of the new “dragon swords.” Her bike has little water shooters. Bad guy is green bandana guy, with new sword and a jetpack that includes a trashbin that shoots flaming garbage and orange bits.

70601 - Sky Shark is a small flying vehicle. I see treasure chests inside the [thrusters/engine/whatever] chains, anchors on the ends of the wings, and orange blades (ones featured in 2012 in gold, the one with a bigger version too) Drops dynamite. I think it’s Lloyd, but a ninja is included with what looks like a jetpack.

70602 - Wu Dragon-like dragon. Looks REALLY nice. Blue, white, dark blue, gold and black. Bad person is Toxikita? She comes with a little flyer with a 6 stud shooter (in the shape of a cone this time) and a dragon sword. She also comes with a monkey! (one from the old Pirate sets) monkey is grey with orange limbs (one is grey) and a brown stud shooter.

70603 - Really neat ship. It’s like a smaller version of the Destiny’s Bounty. Skull in front, cannon, anchor on side, steering wheel, etc. The “blimp” part is just the Friends air balloon in orange. Doesn’t look to bad, honestly. Pirate flag in the back. Also included in the set is a small flyer with two of the old spinner tops on the sides, along with a stud shooter on each. Zane piloting, holding one of the ‘dragon swords’ The characters include Zane, a new samurai with dark green armor and orange clothes. Two of the new sword. Pilot is a green snake…which I find kind of weird. All these characters being mixed together. Then again, probably prelim.

70604 - Neat island. Two areas - one is a small rock structure that uses a drill piece as support. On top is a samurai big-fig wielding an anchor! Orange and dark green with a blue face, looks super cool. Also on the small area is a tree that looks really cool, uses a bush piece and has two orange minifig heads hanging from the top. A small wooden thing is used to walk up it. On the bottom of that is a grey/dark green ninja. I think it’s Zane. The main part of the set looks sort of like the dojo/temple sets. I see those old ninja swords used on the rooftops. On the bottom is a small cave area with one of the ‘dragon swords’ protected by some teeth lookin’ pieces. Some leaves, then the second ‘floor’ is just a window. Top is more roof. There’s a small spider build included, has one of the 2013 Samurai helmet “crowns” in gold. Above the spider is Sensei Wu wearing a pilot’s cap and is in a small hot air balloon! I love it! He is dropping the fruit on the trees onto the spider. Kai is swinging from a vine, and a green bandana guy appears once again with a jetpack made of PoTC bottles and the new sword pieces.

70605 - It’s… it’s weird. Think GIANT brick-built animal head with big orange thrusters on the side, the mouth being a sort of landing area, and the top bit looking like the Alien Tripod from Alien Conquest without a dome. Pirate flag in the middle. The back has like two fins connected with something that looks like a spoiler on a car. On the landing area is Jay who is fighting a, and get this… a four armed ghost holding a dragon sword and a samurai sword. That minifig looks completely preliminary, but I’m curious to see how he’ll turn out. Monkey appears again in a cockpit near the front. In the back is a spinning barrel with the green snake guy in it. There’s a small bad guy flying vehicle with someone I can’t make out in it. Orange. The ninja vehicle is an oddly BIG, BIG jetpack piloted by Lloyd who is wearing Space Marine armor in orange.

That’s all I think I can make out! If you’ve got any questions, please ask!

Are these really early prelims? or can you make out some prints?

That’s interesting, while the main theme is pirates, it seems like the most intriguing part is the integration of some not-so pirate-y characters. If they aren’t placeholders, this whole mish-mash of characters makes the wave all the more mysterious. The sets sound pretty cool overall! 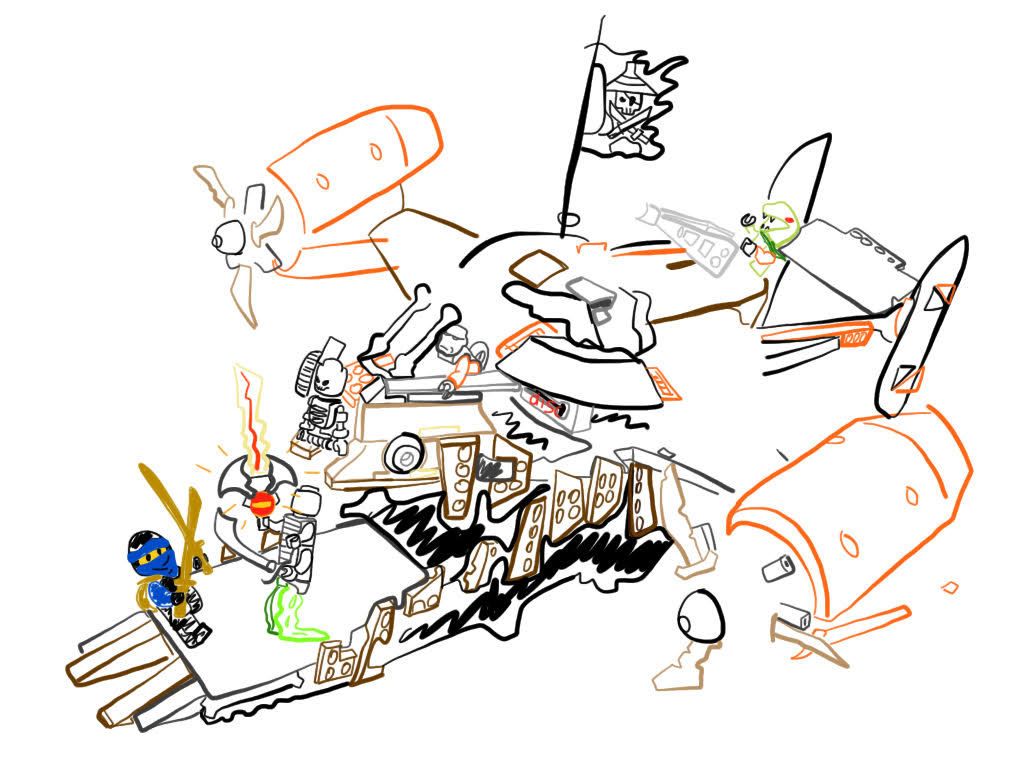 Zeppelin Raid - emptiness is mostly because it’s all black and the lighting wasn’t that good. 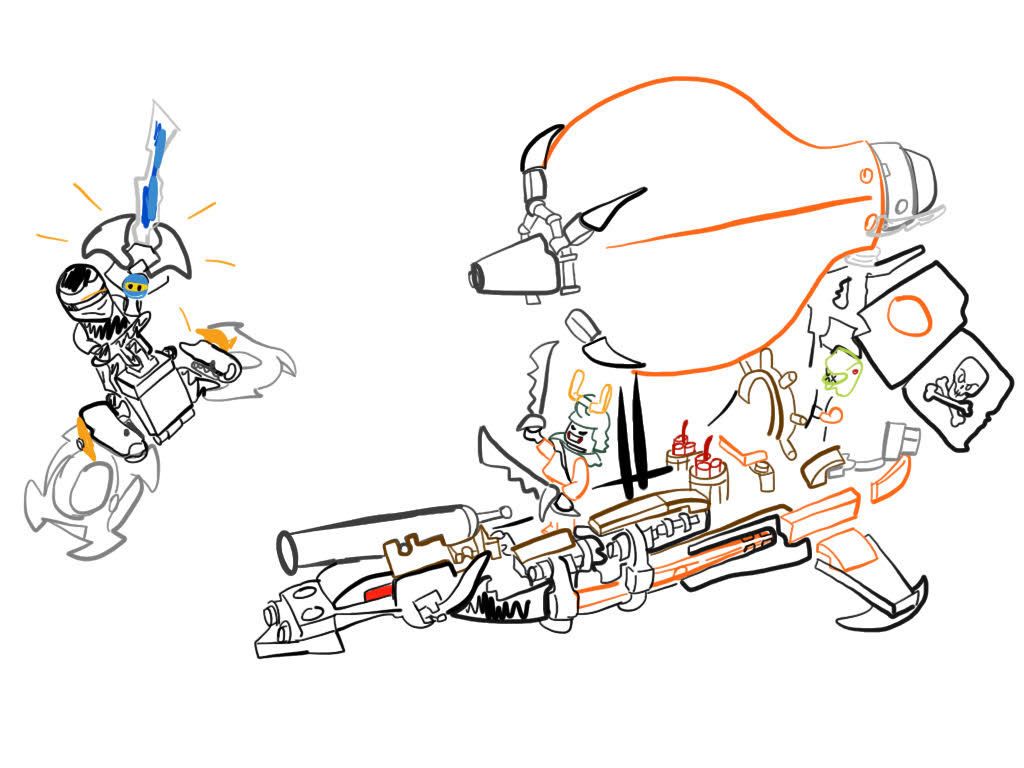 Please read this. Thanks

Just a quick general Q: what is the theme for the next wave?

Wowowow,what will you draw next?

I really would like if it had serpentine and ghosts, like having returning characters from previous waves. But a pirate seems an odd career choice for a ghost considering the whole “Water=Death” thing