I am surprised this isn’t a topic yet, but happy N1NJAG0 day everyone.

The Gardens and the Island sets were just revealed today. What do you guys think of this year so far? 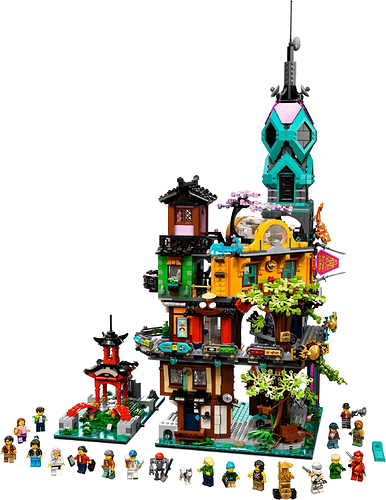 Though I definitely won’t be able to buy it, there’s nothing about the Ninjago City Gardens set that doesn’t impress me. Between the fantastic designs used in the set as a whole, and the Zane memorial from the end of Rebooted, it’s probably one of the most impressive Ninjago sets ever released, in my opinion.

I think the S14 sets look pretty cool. I don’t know if I’ll be able to get every single one of them, but I know I want the Keeper’s Village, Lloyd’s Jungle Bike, and the Catamaran Sea Battle.

It’s so strange to me how in this new Islanders wave there will only be four sets… a unusually low number of sets for a Ninjago wave.
But that was probably due to he other Legacy sets and the massive Gardens set, I guess that’s understandable.

I no longer follow Ninjago. I just don’t find it to be at all engaging at this point. Although those sets are quite impressive.

Well there’s five; there’s also Lloyd’s buggy (https://brickset.com/sets/30539-1/Lloyd-s-Quad-Bike). But yeah, it’s very low on sets. I wonder if they’ll integrate the Legacy sets, I’d love to see the Titan Mech, however that’d just unbalance it even more between the Ninja and islanders. The islanders have… a catamaran, and that’s it.

Titan Mech slaps, just got it and the zane epic battle set

I have all four of the Epic Battle Sets already. And I’m hoping to get my hands on the TOE set.

It’s been quite a while since I’ve been on the TTV Message Boards, so I forgot the exact posting rules/guidelines about LEGO set and minifigure leaks – but are we allowed to talk about the Summer 2021 LEGO set image and minifigure leaks (I don’t mean showing actual images or posting links to actual images here; I just mean merely talking about them here)??? I mean – the Summer 2021 LEGO sets are supposedly coming out in less than 2 months’ time, and the “Seabound” season has already started airing in some countries like Canada.

I think talking about leaks without showing them is fine, but funny enough people around here haven’t discussed anything related to LEGO leaks in quite a while…

Now that all of Seabound has aired, I think I can say this is one of the best seasons in a while. It had a solid storyline, and a really good villain, and the ending felt like a big game-changer for Ninjago. It had Nya merge with the ocean and become a water spirit, and then she left the ninja team. This ending hit me harder than almost any other ending to a Ninjago season. Sure, Zane died at the end of Season 3, and we saw how that turned out, but this is different. Nya is not dead, she’s just left the team. Even though she likely isn’t gone for good, it makes me wonder what will happen to her in the future. Will she somehow become human again and rejoin the team? Will she remain a water spirit and serve as a “side-ally,” like Dareth and Skylor and Princess Vania? Or will someone replace her as part of the ninjas’ team?

Another thing I really liked was that at Nya’s funeral, there were characters from previous seasons. It was already a pleasant surprise to see Vania appear a couple episodes before, since the side characters from Season 11 onward (Akita, Scott, Okino) seem to just be one-shot characters. But to see Vania, and Twitchy Tim, and the Upply, and even characters like Skylor who we haven’t seen in forever…it just felt so good to see them again! And the inclusion of Dareth and Skales helped, too.

(It kinda felt like the funeral scene in Endgame, in that there were characters from all throughout the series’ history. The characters may not have all necessarily known each other, but they were there for the same purpose of honoring a friend).

Acidicus, too. That was pretty neat.

I think people are overreacting to this season. I have seen way too many fake out deaths in this show to fall for this again. I am willing to bet the next season will be about getting Nya back somehow. I do not believe LEGO would be too happy about straight up getting rid of one of their main characters, even though it is probably accurate to say that she isn’t one of the most popular ninja. Also, I find it weird that they decided to dedicate this season to Kirby Morrow… if that was the case, wasn’t Cole the one who was supposed to sacrifice himself? How are they going to keep Cole around when his voice actor is dead, while Nya’s voice actor doesn’t seem to have any problem (as far as I am aware)?

Besides maybe the finale, this season was pretty meh for me overall. People are calling it the new best season… really? I am gonna be honest, I didn’t really care for most of this season. They try to set up a mother-daughter relationship between Nya and Maya, but that ends up going nowhere. Maya just randomly shows up in their adventure, and ends up doing next to nothing.

Prince Kalmaar was a lame villain to be honest. He was no real motivation for he is doing, he just wants to destroy the surface world for no reason. Besides his unique character design, he felt very underwhelming and forgettable.

Wojira felt like just a Great Devourer re-trend, but worse. After being set up in the previous season as something we’re supposed to be afraid about, this monster come out pretty underwhelming and forgettable, yet again.

Episodes 11 and 12 were easily the worst, being just pointless filler, and quite frankly sitting through them was kind of tedious for me.

But by far, the biggest problem is that there is no proper build-up and no proper pay-off. The Nya sacrifice seems to have struck to emotional core with many people, but I am sorry to say it, I was not one of them. To me, the idea of Nya sacrificing herself felt more like an afterthought rather than something that was planned in advance, so I barely felt anything while watching it.

Overall, a fairly mediocre season in my opinion. I find it hard to understand why everyone else loved it so much.

straight up getting rid of one of their main characters, even though it is probably accurate to say that she isn’t one of the most popular ninja.

the only female ninja, too, right?

I would not bet against it. The ending was very emotional, but the knowledge of Ninjago continuing past this point weakens the impact immensely. As a series finale this would have worked just fine.

Prince Kalmaar was a lame villain to be honest.

I would argue that he is the best villain since the soft reboot in 2019 (although his predecessors didn’t set up a high bar). I liked his slapstick moments, but they heavily conflicted with how evil he is supposed to be. (Also the recurring gag of him almost dropping his crown or trident was somewhat cool, because those items did not belong to him since he is not the true king).

People are calling it the new best season… really?

I disliked season 14 quite a lot and was not a big fan of the reboot overall. The swifter character movements, that was used for many slapstick comedy moments and the quicker pacing that came with the shortening of the episode runtime was off-putting to me. But season 15 for me at least was the best thing since season 9 and a definite step up.

Wojira felt like just a Great Devourer re-trend, but worse.

Can’t argue this one. I had hoped that she had some voicelines to develop at least some form of character.

[quote=“LegoDavid, post:15, topic:57970”]
Episodes 11 and 12 were easily the worst, being just pointless filler, and quite frankly sitting through them was kind of tedious for me.[/quote]

I didn’t mind them as much as some experimental episodes in prior seasons, like the first with Fugi-Dove or whatever the guy is called or the completely random return of the preeminent, or the backstory of Okino or the Lowly. So that’s a step upward in my book.

To me, the idea of Nya sacrificing herself felt more like an afterthought rather than something that was planned in advance, so I barely felt anything while watching it.

I think it was implied several times in the season. Maya and Nya talking about making sacrifices during the first mission. Nya assuring Maya that the adventures before episode 13 wouldn’t be their last one plus the Jaya dance. There was a lot of foreshadowing at the very least from episode 12 onward.

I picked up Lloyd’s Jungle Chopper Bike yesterday and was determined to find a way to solve the balance issues. I was able to create a kickstand from a single piece (not included) that stows away easily and is visually unobtrusive. I thought I’d share this here in case anyone was looking for a solution. 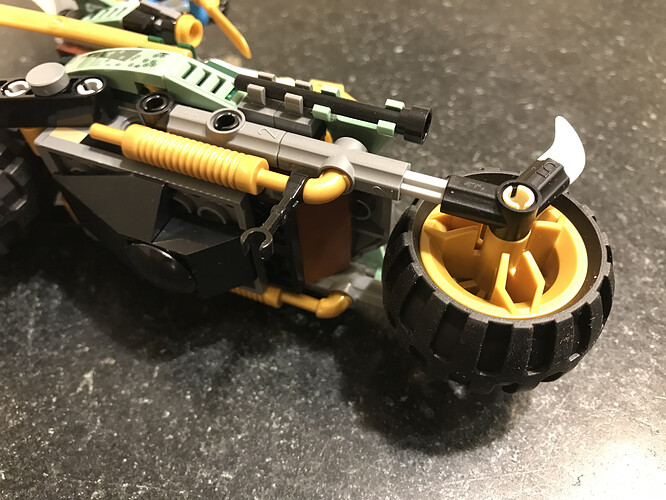 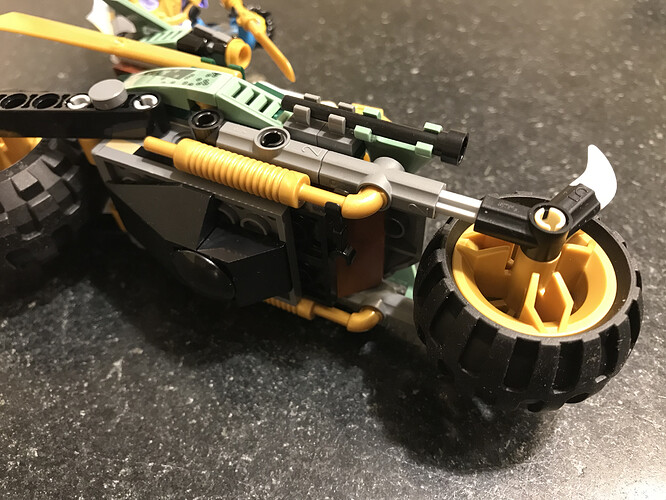 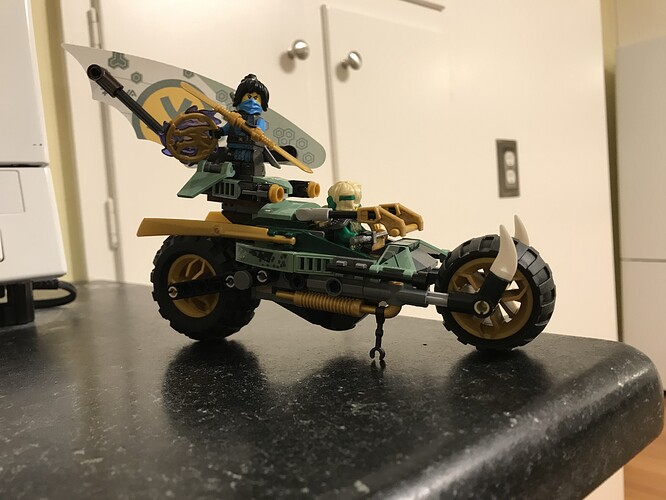 Actually I thought the gold pipe exhaust things on the side were supposed to be kickstands.
I have that set, it’s pretty good. 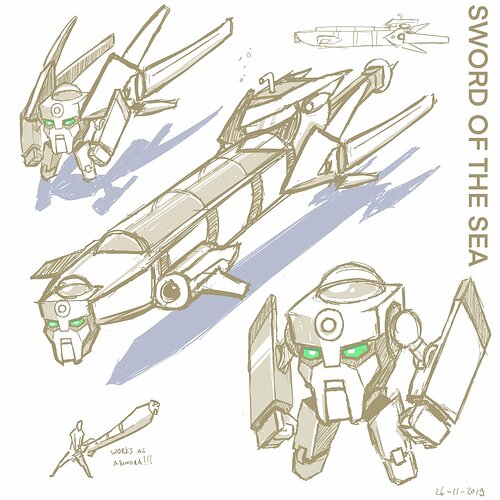