Hey everyone, I’ve been making posters for all of the seasons of Ninjago, and I wanted to share what I’ve got so far. I already posted these on Twitter and other places, but I decided to post all of them here. 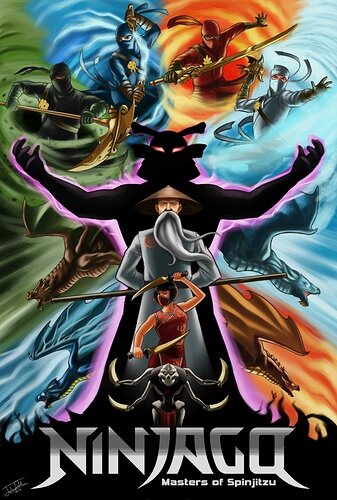 NPilot.jpg5175×7667 2.14 MB
Here’s the season (or episodes) that started it all. For this one, I wanted to match the poses of the original artwork. And I think this is the first time I’ve digitally drawn the ninja in their hoods.

Rise of the Snakes 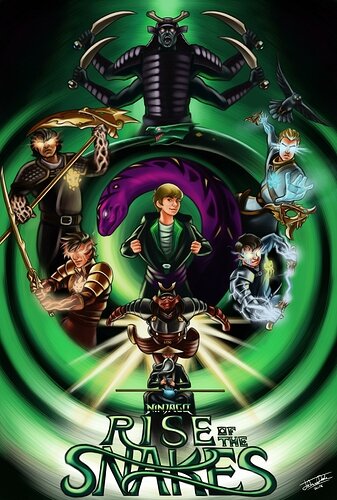 NinjagoRiseoftheSnakessmaller.jpg5006×7416 1.9 MB
Here’s the Rise of the Snakes poster. I originally had a plan for this one, but I had to scrap it because it didn’t fit within the dimensions I gave myself. I wanted to include both the ninjas’ ZX suits and the NRG forms, so I combined them.

Legacy of the Green Ninja 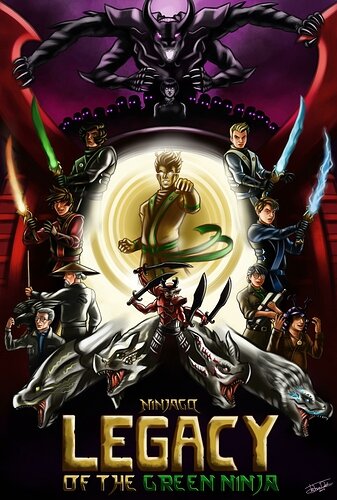 NinjagoLegacyoftheGreenNinjaFinal.jpg5130×7600 1.92 MB
Here’s Legacy of the Green Ninja. I always called it Final Battle. What I think is coll about this one is that you can see the evolution of Garmadon and the Overlord when you compare this to Rise of the Snakes and Rebooted. 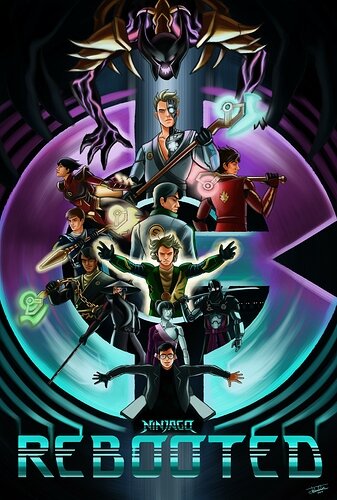 NinjagoRebootedDisc.jpg5184×7680 2 MB
I did this one after Tournament of Elements, so now this is the earliest season I’ve drawn. I wanted to include some themes and plot points into this, such as the Overlord and Cyrus fighting for control over Borg Industries, as well as Garmadon becoming Lloyd’s mentor. I also decided to give the Overlord a very spiderlike look to reflect his design in the last episode. 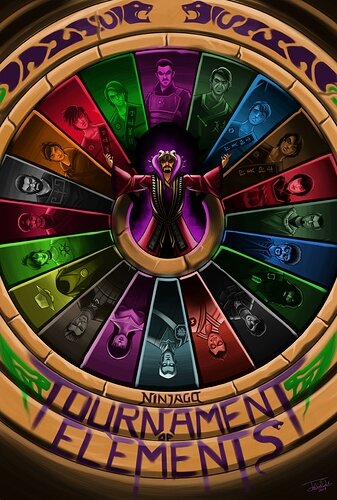 NTournament.jpg5175×7667 2.21 MB
The earliest season I’ve done, but not the first. I was trying to depict all of the Elemental Masters (plus Clouse, Garmadon, and Nya) being held inside a giant game wheel, to imply that they’re all trapped in a game with Chen as its center. This is one of my favorite posters so far, besides the Sons of Garmadon one. 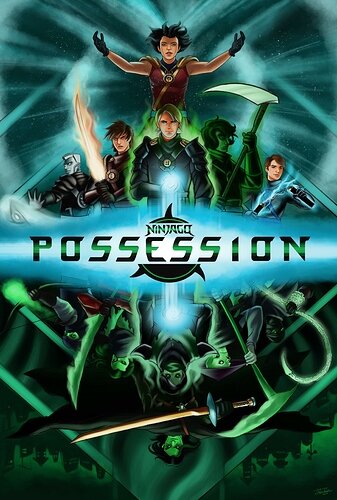 NPosession.jpg5175×7667 1.97 MB
This is my latest poster, featuring season 5. I always liked the idea of the ghost masters being parallels to the original ninja, with Kai and Bansha both wielding swords, Cole and Ghoultar being the strong scythe wielders, etc. So I played with that idea to create this. I tried to pick out the important parts of this season, which was Nya becoming the Master of Water, the introduction of the Realm Crystal/Realms, and Morro possessing Lloyd. 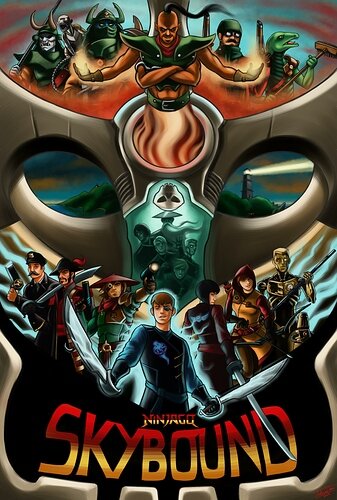 NinjagoSkyboundsmaller.jpg5130×7600 2.02 MB
Here’s my most recent poster, featuring season 6: Skybound. For this one I wanted Jay’s B-Team to be the center of focus, rather than the ninja. Instead, the ninja are trapped inside the sword in the middle. I had a little bit of trouble with this one, but I’m happy with how it turned out.

Day of the Departed 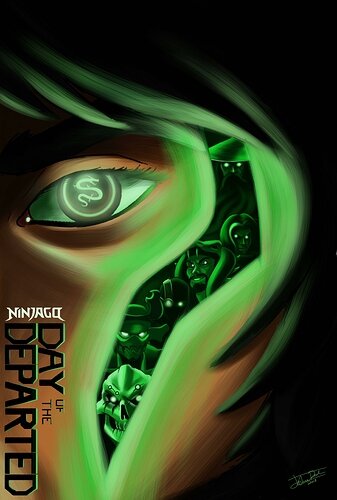 NDeparted.jpg5175×7667 1.15 MB
This was the second poster I did, featuring the Halloween special. This is one of the smaller ones, done in only one day, to symbolize the fact that it isn’t a full season. Since the special kind of rehashes villains from other seasons, I figured they would have their spotlights in other seasons, so I put all of them in Cole’s rift scar. 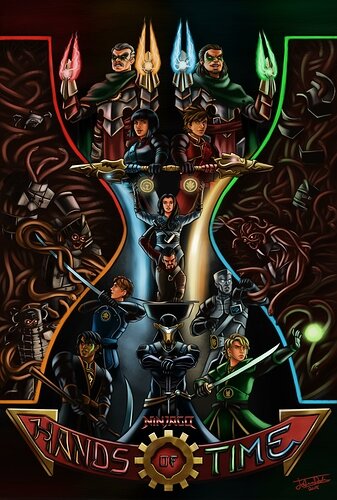 NinjagoHandsofTimefinal.jpg5063×7500 2.01 MB
Hands of Time. the one season that I haven’t watched all the way through, mostly because I couldn’t find it anywhere. Either way, I really like the costumes in this one. 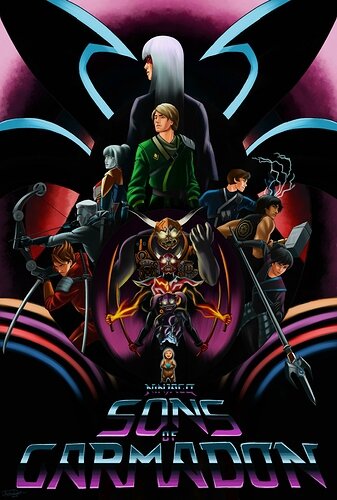 NSonsofGarmadon.jpg5175×7667 1.67 MB
And finally, the one that started it all. Season 8 has been one of my favorite seasons, so much so that it inspired me to draw this. I really tried to give it the neon aesthetic that SoG has. My favorite part is the Sons in the middle, especially the colors on Mr E’s torso and all the lighting effects. 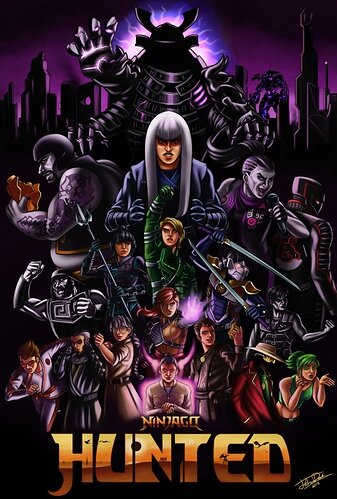 NinjagoHuntedPurpleFinalsmaller.jpg5022×7440 1.85 MB
The first half of the Hunted Poster, featuring the Ninjago Realm half of this season. 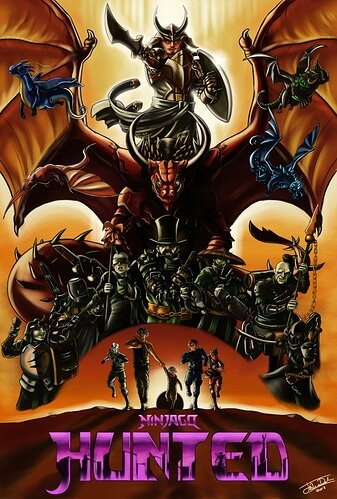 Oh my god! All of them are so cool! How you make them?

Is it just me or do these look almost like Anime posters?
Good job btw, really loving the idea

If you look really closely, you can find the entire TTV Cast hidden in these posters…

That SoG poster seems like something from the ‘80s. Tournament of Elements is probably my favorite, though.

I used my Wacom tablet and Sketchbook Pro, if you’re asking about technical stuff.

@Leoxander That’s exactly what I was going for with SoG.

These posters make me wish Ninjago had been 2D animated in this style… Great work!

Thought the first couple were pretty cool, but then I got to Sons of Garmadon. WOW. Amazing work on all of these.

Oddly, my favorite is Day of the Departed, even though it was one of the most disappointing things I’ve ever seen, period. Anyway, these are all excellent- I love how you captured the diversity n designs on the Ghosts, also, I always thought they were kind of wasted. I vote you do Skybound next, again, because of all the different looks for the villains. My opinion on my favorite of these may change when I get a chance to watch Sons of Garmadon. Actually, now that I think of it, I haven’t watched the time travel season, either- I’ve got to get on that.

I’m actually doing the Rebooted Poster right now, and I’m almost done with the flat colors. It came down to Rebooted or Skybound, and I wanted to draw the Overlord. But Skybound will come next. And I haven’t seen Hands of Time either. I guess I should before I draw that one.

I just saw the rebooted poster and man… that is really cool.

Dang dude, these are fantastic!

Edited for language by Prentice1215

Have you caught up on Hands of Time?

I haven’t. It isn’t on Netflix or Hulu, last time I checked. I’m still looking for a way to watch it.

I recommend looking in the library for the DVD. It’s free.