Gathered friends, listen now to another continuation of this legend of the BIONICLE…

Not even 20 years since the departure of the Toa, Ekimu the Mask Maker, unofficial leader of the island of Okoto, called adventurers from all around the island, all to the City of the Mask Makers, to listen to his plea. That is why you are here; all of you have been called here by him to help recover the island from its recent crises.

This RP will involve you, Okotan adventurers, exploring the island of Okoto and the surrounding areas, both canon and not so. although, to do that you’re gonna need a character.

Name:
Element:(The element(s) they were born into)
Equipment:
Appearance:
Bio/Personality:

Huh… looks like I can use that version again…

I haven’t been in a Bionicle RP yet. Why not.

Name: Atlas
Element: Earth
Equipment: Hammer, Shield (that he rarely uses)
Appearance: Purple mask, silver and black armor, silver shoulder pads. Blue eyes. A bit taller than most Okotans.
Personality: Calm but easily angered/annoyed.
Bio: Atlas, unlike most Earth Okotans searches for treasure instead of mining crystals. Although he does mine occasionally.

Name: Jeren
Element: Jungle
Equipment: Bow, small sword
Appearance: Dark green with green and trans green highlights, jungle Okotan mask.
Bio/Personality: Solemn, lost in thought, Quiet. He would rather be alone, but he will work with others when he needs or chooses to.

Name- Echo
Element- Jungle
Equipment- Axe, obviously
Appearance- For some reason, wears white and blue armor. Pretty much his moc but in okotan form. Also, he wears a skull spider on his head that he killed
Bio- Echo came from a village between the water and jungle regions, he abandoned it as a young child and fled to the ice region due to unknown reasons. 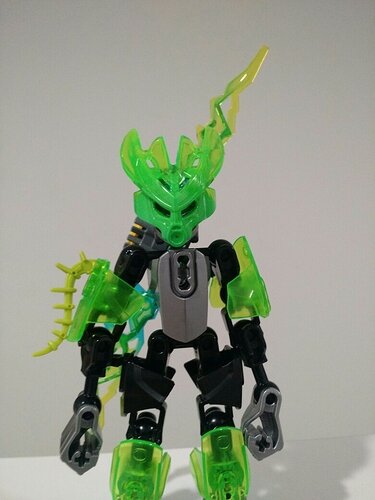 Name: Vinazu
Element: Jungle
Equipment: grappling hook(not a grappling gun, a grappling hook) a sword within one side of the blade being serrated, a glider made of leaves and sticks.
Appearance: green mask, silver armor with black and trans green accents.
Bio/Personality: an eccentric inventor/adventure who has wandered the island looking for inspiration for his inventions.

Name: Izin
Element: Ice
Equipment: A sword with enough of a curve on the end to double as an ice pick, buckler shield.
Appearance: white mask, trans blue with white and silver accents.
Bio/Personality: cold and calculating, hides his emotions.

Name: Vladin
Element: Fire and water (inactive)
Equipment: Sword, shield, ax
Appearance: Red mask, red and orange armor with some small yellow accents (maybe I will do a moc for him)
Bio: Vladin is an adventurer. He loves to search for tresures along with his twin sister, Athena. His father is Narmoto’s best friend, while her mother is a healer from the Region of Water (I don’t know what results from two different Okotoans. I think that the child will have one element active, and one inactive). He is a very good engineer and like to make small robots.

@Runa In other role playing games I was allowed to use multiple characters. Can I do this? If yes, this is my second character:
Name: Athena
Element: Water and fire (inactive)
Equipment: Bow, arrows, spear
Appearance: Dark blue mask, dark blue armor, with some purple accents.
Bio: Athena is Vladin’s twin. She is older than him with five seconds and she loves to go in adventures with him. She always wanted to met a Toa. She is also very very very smart.

Thank you! We already have nine characters. Isn’t this enough?

Weapons/equipment: His weapon and equipment, the ones he always has on him at least, include a scythe with a large, ornate blade with a dragon design on it which he manages to always keep in near pristine condition, holding clips/holsters along his back, which are designed for quick removal.
He has also has a shoulder mounted rapid fire plasma/whatever it is they use cannon that can fire 15 shots before a reload is required, two knives with hip holsters, a large, tattered, black cloak, that can cover his entire body, with hood and a side satchel which holds a sharpening stone, a light stone (pretty sure those are in Okoto), flint and steel, a highly compact able sleeping bag.

Appearance: He is quite tall, being above average for most Okotorans, even standing over most other above a enrage ones, he is still much shorter than a toa though so one would not mistake him for one. To counter his height though he is quite skinny, while not abnormally he is skinny enough to be considered quite a lanky individual. Despite his appearance he is still quite an intimidating figure, towering above others with clawed hands and feet that make him an exemplary hand to hand combatant and climber, his armour, a shade of black so deep he easily blends in with even the barest of shadows, cracked and scoured from years of fighting and his massive scythe which he keeps on his person at all times.
For his build as said he’s tall and skinny with clawed hands and feet and pitch black armour. He also has black, semi crystalline formations on his shoulders with translucent green tips, black unity armour on his translucent green upper arms and lower legs, black skeletal lower arms, black armoured, black skeletal lower legs and on his black chest piece he has a black, skeletal rib design.

Personality: He is by all definition a loner, a very up unsocial one at that, when he’s around others he usually seems very… Blank, barely showing any emotions. he prefers to be left alone and does not usually speak much, typically only doing so when he needs to reply, he’s working with others, he needs to ask something important or something/someone interests him to ask about it/speak to them. He also has a tendency to give off a very intimidating aura to others who he isn’t used to, making it more difficult for others to approach him. This doesn’t mean he’s not good with others, it just typically takes him a while to get used to someone enough to open up, and he tends to not have that time or enjoy the others company enough to want to, but if he does he becomes more social with them and his emotions do show through more, he is actually quite a happy person and a bit of a jokester, albeit a bit soft spoken and unsocial. That’s not to say he’s a pushover or something like that, far from it, angering him is the last thing you want to do, he has been known to nearly kill others who’ve angered him, flying into a blind rage dependent on how badly the enraged him.
He tends to be very apathetic towards others unless he likes them, his apathy is at a level where he could watch someone die and not care, but he will try and help someone in a situation like that but someone like a beggar or hobo he can easily ignore.

Bio: Tekan has always been a strange Okotoran, preferring to be left alone and even making his house deeper in the jungle, farther from the others and only coming into the village whenever he needed supplies. After the skull spiders first attacks he vanished and was assumed dead for a few years until he showed up at one of the more protected villages, wearing his cloak and carrying a blood covered scythe and net full of dead skull spiders, his armour cracked and damaged and instead of his original black mask with green tips (protector style) he wore a black Avohki from places unknown. After he was allowed into the village it was discovered he had been surviving out in the jungle for the years he was missing, killing skull spiders until he found his mask. When asked about it he says he found it on accident, finding a buried temple while exploring deeper parts of the jungle for supplies,

Due to his tribe he has highly increased strength (for his build. So really just slightly above average).
He is also very good at sneaking and such due to his armours coloring, being able to hide in shadows with ease and being quite light on his feet. He is less agile, slower and heavier than expected, also due to his tribe (going with the earth types are heavy thing and can’t swim well) but he has learned some parkour and is good at it, mainly just with climbing and jumping slightly larger distances than expected, also he has learned to swim much easier than other earth type Okotorans but still greatly dislikes water.

He is not the most well armoured individual but makes up for that in endurance, being able to withstand multiple heavy hits, of course after a fight like that he’ll basically be out of commission for quite a bit while he recovers and his stamina isn’t the best for certain activities, such as running, tiring out faster than most.

Not much is known of Tekans past or his age due to his secluded nature but it is believed he is at least some middle aged or a touch younger (for an Okotoran).

God! Your reply is so big!

IT’S CALLED COPY, PASTE & EDIT! MUAHAHAHAHA!
So glad I was in another Okotan rp once! XD

Accepted, if(and I assume it is) the Avohki is powerless.

Ja it is, even if it might’ve been designed to have powers its cracked so, boop, no one’ll ever know.~

Vinazu looked over his letter- the same one all the invited adventures got -as he looked for the building they were supposed to meet in. He read it over again. Dear adventurer, I invite you to an audience in the City of the Mask Makers. If you accept, I invite you to meet me at the city’s meeting hall in one week’s time. Sincerely, Ekimu the Mask Maker. He looked for the large hall in this mess of a city. “This place is a lot more crowded with people then the jungle…” Izin looked at the city from across the bridge. “Hm…” Nuuma wandered around the city. “Eh, now where is it?” @Toa_Distraxx @Morgy @BrokenAxels @jayzor17 @KAI_BORG @Toa_Vladin

Mind if I join the party?

Equipment: Two Golden Swords and a Lava Surfboard that can be used as a shield.

Appearance: Taller than most other Okotans, red eyes, has red and gold armor that is reminiscent of the armor designs of Tahu, the Master of Fire. Has a standard Okotan Mask with a golden color. 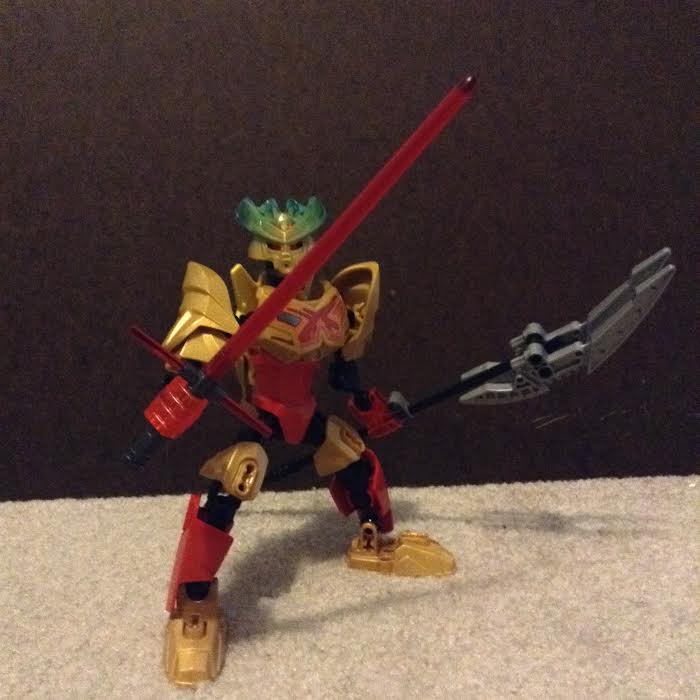 (Here’s a little version of it I made in Paint.net) 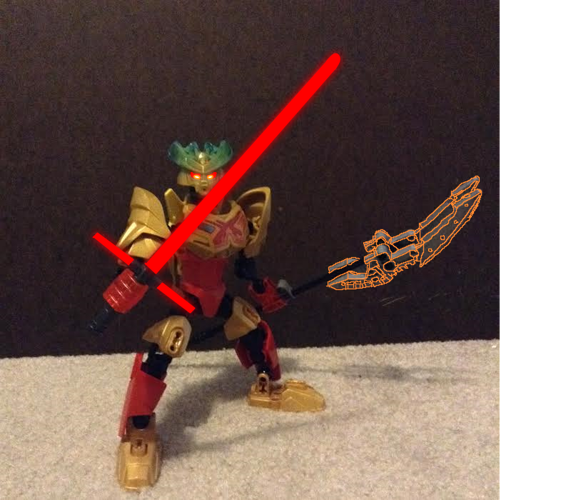 Bio/Personality: Dreams to one day make masks as an apprentice to Ekimu so he can help others in a greater capacity than he otherwise could. He is friendly but wary of danger and he fancies himself a bit of a strategist. He lives in the City of the Mask Makers and helps out with the defense and construction when needed and enjoys reading in his spare time. He is also a bit of a musician in that he rarely has a moment where a song isn’t stuck in his head.

(@Runa) What is thine verdict?