Flandrex was created during the Dimensional Relocation of Luna Magna, when Helryx was struck by a blast from the Spear of Separation, an alternate timeline’s version of the Spear of Fusion. (Carried by that timeline’s Vezon.) This caused Helryx’s miniscule amount of evil and bad intentions to be separated from her, and given physical form as a small, armored, snakelike creature.

Since the amount of evil in Helryx was so miniscule, the creature was weak, and slowly dying. The only thing it knew was its name: Xyrleh. (Zer-leh.) During the collection of the artifacts of power, Xyrleh was scooped up by a speeder flown by a member of Helryx’s Toa team, and deposited into a nearby airship. Eventually, Toa Ayhax found her in the pile of artifacts, and brought her to Helryx. Helryx took pity on the dying creature, and nursed it back to health. She was unknowingly reviving this pure evil being.

As Xyrleh’s strength was revitalized, she began turning to her evil instincts. She attacked and killed Toa Khafu, one of Helryx’s Toa team, forcing Helryx to abandon the evil creature in the wilderness. But Xyrleh was already strong enough to fend for herself. She soon found a village and started sucking the life force out of wandering Matoran and Rahi. Every time Xyrleh absorbed life force, her body grew in strength and size, until she eventually resembled a thin, boney version of Helryx. As she raided and destroyed more and more villages, word spread of the terrible creature that came from nowhere. She came to be known as “Flandrex.” (Meaning ‘Scarlet Devil’ in Matoran.) When Xyrleh eventually heard the name, she adopted it as her own.

Upon hearing about the threat of Flandrex, The Hand of Artakha couldn’t stand by. They sent Helryx’s Toa Team on a search of nearby Matoran villages, planning to find and capture Flandrex. However, Flandrex had plans of her own. She had discovered one of the artifacts of power hidden by The Hand of Artakha, the Legendary Sword of Destruction, Lævateinn. (Lava-ten) The same sword Shelok used to kill the alternate timeline versions of Vezon and Fenrakk, and capable of bringing down entire city blocks with a one swing.

Even though the artifact was powerful, when Helryx and her team found Flandrex, the battle was quick to see a winner. Flandrex was not a great fighter, and couldn’t control her element very well.

Years past as Flandrex remained imprisoned by the Hand of Artakha. During this time, Helryx discovered the nature of Flandrex’s origins by using her Mask of Psychometry. Helryx felt somewhat responsible for Flandrex, attempting to convince Flandrex to use her powers for good, but to no avail. Eventually Flandrex went insane while imprisoned, due to rough treatment from the members of the Hand of Artakha.

After the Hand of Artakha headquarters was destroyed, and the Hand itself replaced by the Order of Mata Nui, surviving prisoners needed to be transported to the new headquarters on Daxia. During the transport, Flandrex broke free and slaughtered the Toa that were moving her. From their weapons, and pieces of her prison cell, she crafted large metal wings and fused them to her back. She also obtained a Kanohi Crast from one of the fallen Toa, and retrieved the Sword of Destruction.

When word of Flandrex’s escape reached the Order, they quickly scrambled every member they had, and headed out to recapture her. The resulting battle was devastating to the Order. All of the time Flandrex spent imprisoned, she was practicing her elemental powers. It took the combined efforts of Helryx, Tobduk, and several other Order members to stop her, and almost all of the Order members were lost. Flandrex was imprisoned again, this time in a cell designed especially for her, similar to the powers of Piraka Avak. She remains there to this day, growing more and more angry and insane with each passing moment.

That’s all I’ve got for now, see you guys next time!

My only problem is with the wings being many different colors instead of just one or two. It really break the color scheme.

I agree, however knowing what this moc seems to be based on, I get the reason behind it.

Does “particle beam projectile” include bullets by any chance?

Does “particle beam projectile” include bullets by any chance?

You could call it a bullet. Hell, shoot 'er!

I kinda like the different colored wings here, it gives her a very distinct look that just works for some reason IMO.

I do think it is a little more worse than your other MOCs - it just looks very greebled to me (mostly due to the color scheme) and I just really dislike how the mask is silver!

I do like the backstory though! (and how ‘Xyrleh’ is ‘Helryx’ spelled backwards!)

Great job, however the wings really should be different colors.

I love everything except for the wing thingies, which seem out of place.
Overall it’s pretty great!

however the wings really should be different colors.

love everything except for the wing thingies, which seem out of place 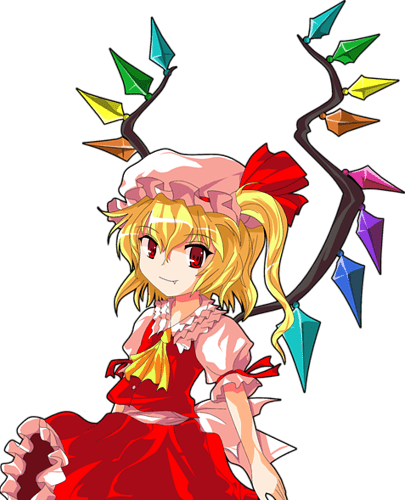 not that that’s a bad thing. In fact i’d love to see more mocs based on touhou characters

Other than the wings, how is it “literally” that?

-flandre’s ability is absolute destruction, same for the moc
-both are vamparic in nature (flandre is an actual vampire)
-both have swords named laevateinn
-aftermentioned christmas light wings
-colors
-both have been sealed away in one way or the other (apparently)
-the NAME (flandre also lives in the Scarlet Devil Mansion, but it’s her sister that has the title of “scarlet devil”

Design wise, maybe not too much. But there are so many cues to Flandre in the MOC’s story. Again, not a bad thing, as there are enough original ideas that make it stand out as a character.

That’s like literally all I do. Here you go

I like the wings, but i dont think they fit a MOC that is primarily red, white and silver.