Piejeska the Exile: Toa of Sand

Here is Piejeska the Exile: Toa of Sand. below is his backstory if you wish to read. Comments and critics are welcome. 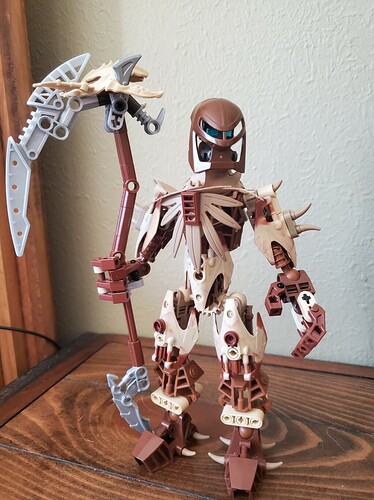 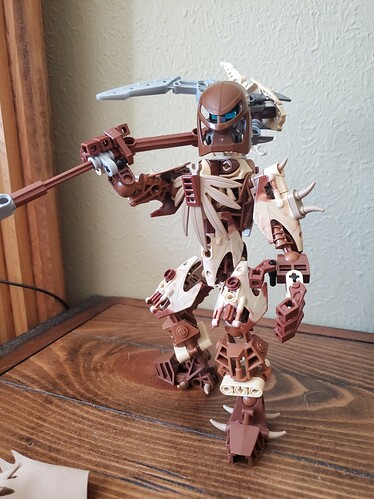 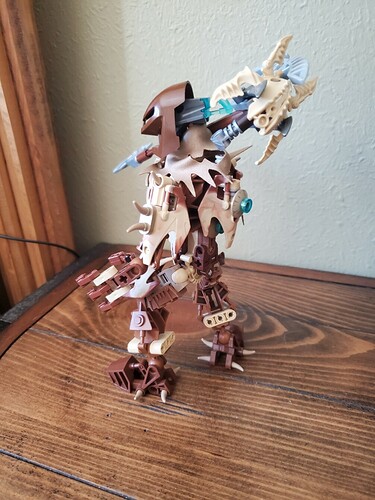 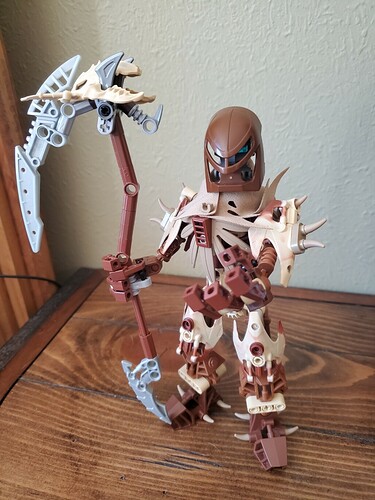 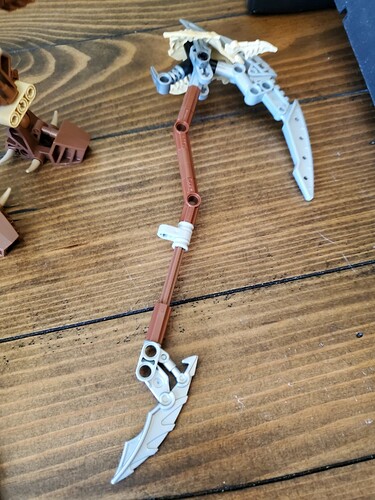 Piejeska never felt like a true Toa of stone, never really feeling connected to his element. Yet, when the other toa rose up against the oppressor Makuta he answered the call. During battles he would use his meager abilities with stone to shield those injured and fleeing battle. During a major push into Metru Nui the Spirit robot was ripped open, from what he did not know, and he was thrown from it. Piejeska thought this was the end as he plummeted to the ground below. But he awoke, injured and almost all his armor was unrepairable. Worse he found himself surrounded by scorpion like beasts fleeing from the crashing debris.

Once the dust settled he rose from his place and surveyed his surroundings. Nothing, but sand and wreckage for as far as he could see. Amongst the rubble he found a Great Miru which he placed on, as his original mask was lost. He next surveyed the bodies of the scorpion-like beasts unable to flee the falling rubble and realized their outer shell was durable as proto steel. He removed his damaged armor and scavenged the remains fashioning himself new armor. It was then he was struck from behind by a massive stinger. One of the beasts looked at him menacingly. His new armor held, but he found himself facing a foe without a weapon.

Piejeska called on his element, but nothing: no wall of stone or bolder moved. He was hit again and then he used his new mask to gain some distance from the creature, but knew he could not evade it forever. He again called on his element again seeking to will a nearby boulder, but it did not move. Yet, something else did, the sand! To his amazement the sand spiraled around the beast and shot forth spears of compacted sand. The beast dodged. Piejeska then tried manipulating the sand beneath the creature and it was suddenly sucked down to it’s chest unable to move. Though because he was unifiliar with this new power, it’s descent did not stop and it was sucked beneath the sands to it’s death.

Piejeska returned to the ground below him and mourned the death of the beast. Confused, injured, and in a foreign land Piejeska vowed then and there to master his new abilities in exile and to never feel helpless again.

Love it. The brown Miru worked better than I thought!

This guy’s backstory is really nice, plus the appearance of the moc looks great!

Great MOC. And you have my praise for using a name related to his element!

I really do love the unique armor use here. That scythe though is such a stand out.

Love the scyth! The rest of the moc is ok too.

The whole mac is good, though the arms look like they’d be a little restrictive movement wise. Though that scythe just makes up for everything. Awesome job!