Hello everyone, and welcome back! This is the final stage of this process. Between November 23rd and December 14th, we had you guys submit your favorite TTV Channel moments from 2016! We in the crew went ahead and selected 11 of those to move on to the list. And now we’re bringing you into the fold once again!

You’ve got until December 22nd to vote on these 11 TTV moments! You can vote for as many - or as few - as you like! This way, you guys pick the places these moments take on the list.

One slight difference from last year is that we included 11 in this poll. There were some moments we felt could work just as well as others due to how good they were. To decide which will go, the one with the least amount of vote will not make it on the list.

Below are the links and time frames for the Top 10 Moments! Once you’re done listening, go ahead and cast your vote!

Alrighty, that about sums it up! Thank you all for participating, and we look forward to seeing the end result! Talk to you all soon!

To say I have watched 10 TTV videos this year might be a bit of a stretch.

I did see Meso’s message to the fans, and that was real cool…

I think Eljay’s finale was amazing and definitely my highlight of this year!

Someone, please vote on Hash Brown Logic OR Recrusting France. We need a 10th place. Please only vote on one of them l.

Man, that Top 3 is so obvious, I’m interested in seeing which turns to second place 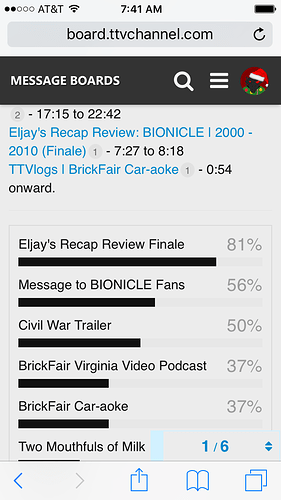 Did we really need a poll to confirm that Eljay’s reveal would overshadow the rest?

IMO, Meso’s speech really deserves the #1 spot. It was eloquent, succinct, and if I remember correctly, entirely spontaneous. It had meaning. It had purpose. It had soul.

Eljay’s mask? Doesn’t really mean anything special. I mean yeah, the most memorable trait about a cast member has been removed. But does that really compare to such a heartwarming and sincere message? I don’t think so.

To be fair, Eljay gave a speech too…

But was it as memorable?

I think it was incredibly memorable, but it was more expected. No one expected Meso to give that amazing speech at the end of G2, on the other hand, everyone knew that Eljay would give a speech at the end of the recaps. But then to contrast that, no one really expected Eljay to EVER take off his mask. The shock factor alone counts for a lot.

First off, the BrickFair Video Podcast. Such a classic, hilarious mooment, and probably the most standout moment that I was involved in. It’s just so groundbreaking and hilarious. The fly discussion will always be incredibly hilarious to me.

Next, I’ll go with… Hash Brown Logic. Box of Useless Junk was my all time favorite moment from last year and this is basically the epic sequel to that. Eljay’s twisted logic, Var’s building rage, and Exx’s funny one-liners. It’s the perfect combo.

My personal pick for top moment, though, has to go to the Recap Review Finale. Every BIONICLE G1 set collected into one video, which is a phenomenal enough accomplishment even without Eljay’s face reveal. That reveal, though, elevates this moment to a level that will be hard to beat in the future solely due to the incredible amount of buildup behind it.

My personal pick for top moment, though, has to go to the Recap Review Finale. Every BIONICLE G1 set collected into one video, which is a phenomenal enough accomplishment even without Eljay’s face reveal. That reveal, though, elevates this moment to a level that will be hard to beat in the future solely due to the incredible amount of buildup behind it.

I really need to start listening to the podcast again. It’s been way too long since I last gave it a listen.

…I wonder if I can marathon over 100 episodes in about a week.

Boy this gonna be gud.

…I wonder if I can marathon over 100 episodes in about a week.

lets do some math

Thus, to watch 100 episodes of the TTV Podcast (and no Brickfeed or TTV Talks) in a week, you would have to spend 14.3 hours every day listening.

Although a few of the podcasts are around two hours, so good luck.