To save the spam, all my MOC’s shall be in reply to this post

Now, this topic is not only to share my MOC’s, it is also to experiment and improve my MOC making skills. I have just started to sort my Lego Bionicle parts into separate containers (before they were all in big boxes) So it’s now a lot easier to find and connect parts.

I am very new to MOCing, so please don’t be too harsh when/if you are giving me constructive criticism…

So to start this topic off, I am going to present my selfMOC’s team, called Gamma Team.

This is Ragged Claws
Now some of you may know my channel on youtube and so you may know about him already. For those who aren’t familiar with my channel, here he is 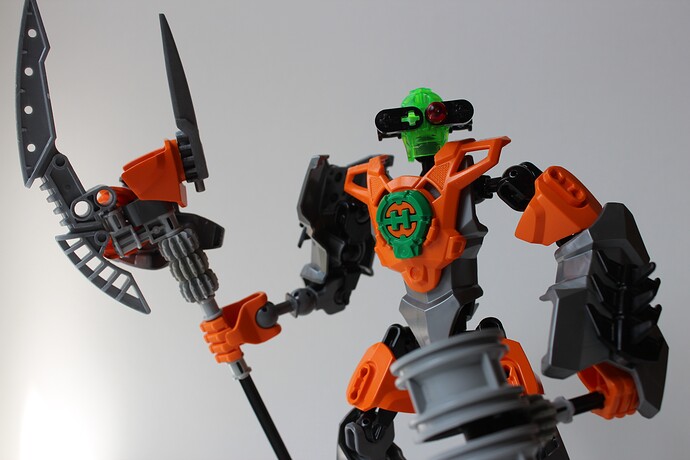 Keeping in theme with all the HF builds, he is very simple. He is a medical robot (think of ratchet from TF) So he mostly helps aid other Heroes. He also doubles as an engineer, hence why his weapons are so odd, because, he built them himself.

Now moving onto why there is a Gamma team. Ragged Claws is around 6 years old (kinda ridiculous when you think about it) and in those 6 years he has always wanted to just fly around space and basically explore as much as he can. So one day he requested a spacecraft and away he went. You may think “oh that’s not much of a backstory” But, not every person has to have incredibly complex backstory with millions of little details… It also keeps in theme with HF, a very simple story.

So he explored a couple of planets until he found one with a prison on it. Being on his own and having been away so long that HF would’ve discharged him, he decided to walk in. Just by pure luck, a breakout was happening at this time and this is where he met Dark Umbra (I posted this moc a while ago, but i’ve edited her since then) she is running away being shot and Ragged does what a hero does best and protects her. What Ragged doesn’t know is that she’s a top tier assassin and has killed multiple heroes. 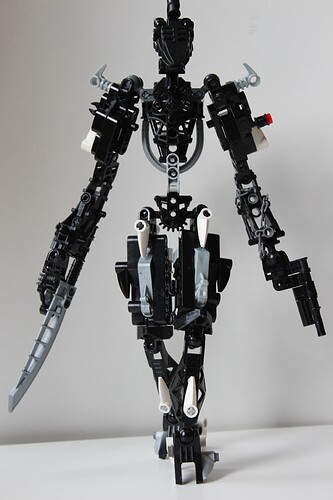 He hits it off well with Umbra and they become great friends and thus, they carry on exploring. Then we arrive on a planet where there is a great structure with thousands and thousands of different coloured giants. They’re all flying around with their rocket boots and adding to this huge structure. Ragged accidentally sounds some sort of alarm and all the giants start to fly towards Ragged and Umbra. A chase occurs etc etc, until there is only one robot left chasing them. Dark Umbra takes down the giant and it falls onto the ground where Ragged starts to tear it apart. He realises it’s still alive and takes the opportunity to reprogram it. After a night of sleeping in a cave the robot finally wakes up. And here she is. 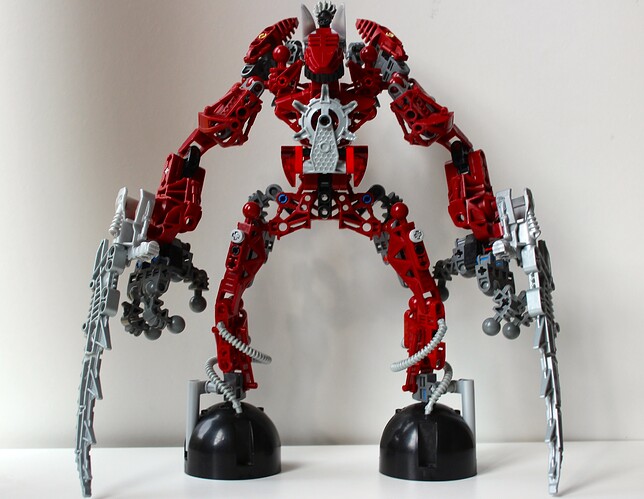 They asked what her name was and she replied with “I don’t know” So Ragged and Umbra just named her “Red”. The reason she is this big is because she is actually a victim of a great villain (whoididn’tmakelol) who is trying to rebuild his ship and journey back to his home planet. What makes him a villain is he takes Matoran from local villages on this planet, rips them apart in the most brutal way and makes them into a giant, where their only purpose is to repair and help build his ship. It’s a bit nasty but oh well. 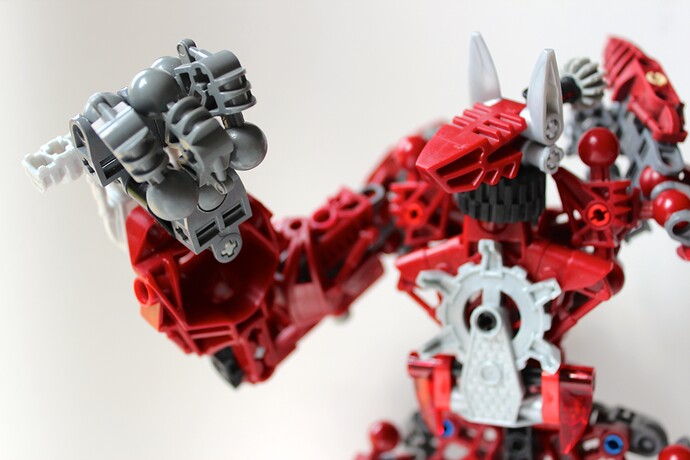 Ragged keeps commenting on how badly “Red” is built…

So this trio continue on through the galaxy and at sometime there is a romantic relationship between “Red” and Umbra. Eventually, they stop on a planet with another prison, so Dark Umbra decides stay in the ship, just incase anyone is looking for her. Ragged and “Red” notice that this prison is slightly different from the others. It has one cell. They can hear a mighty scream from inside this cell. So what do they decide to do? They decide to break in of course!
After this insane break in, Ragged and “Red” kill most of the guards, but are left injured. They then limp over to the cell and open it. This guy then walks out 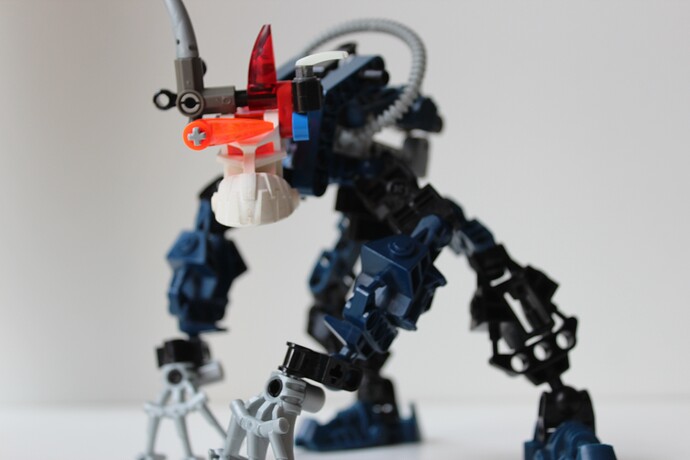 This guy is called Imp. No one knows much about Imp only that he’s a ruthless killer. What is also known about Imp is that he was born on a planet with an exceptionally high gravitational force. So any creature on there would have to have incredible strength to stand (alsoshutupicouldn’tthinkofanythingelse) this allows him to carry this extremely heavy weapon and have incredible strength. 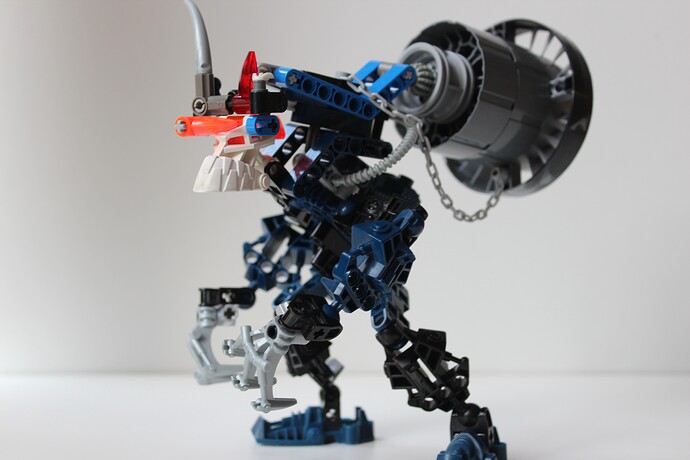 Oddly, Imp does not seem to attack “Red” or Ragged. He appreciates they’re help, but assures them that he might kill them in the future. For some reason this doesn’t put them off and they add Imp to their ever growing team. 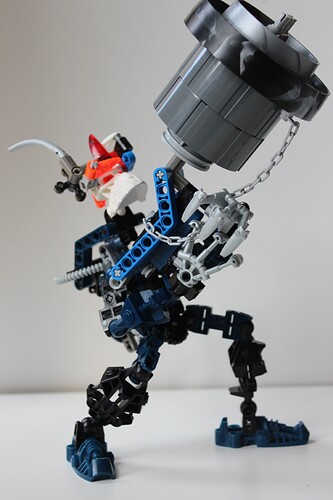 A couple of planets later they arrive on a planet consisting mainly of islands. They ignore the horse shoe shaped island and go to one shaped kind of like a hammer. They arrive in the jungle and all get out. The team swear they can smell burning and sure enough they discover a figure high in the sky burning the forest. On the ground are Matoran running and screaming and most are already dead.

Just to fill you in, this is another backstory of mine (including a MOC) about a team of Toa being corrupted by opposite powers. So this Toa of plant life was corrupted by fire and cannot control it. Thus he burns down his home and all his villagers.

They jump down into the fray and Imp, followed by Umbra jump up onto the tree tops and head for the figure burning the forest. “Red” and Ragged start searching through the houses for any survivors. That is when they come across Orkney 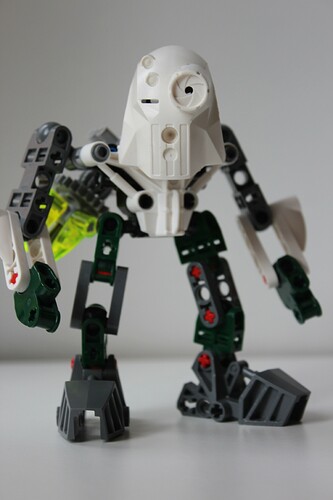 (hoorayforholeymocs) This Matoran is trying to just tooling up to get out there. They see “Red” and Ragged and ask for their help. “Red” takes the Matoran and they start running back to the ship. Imp at this point finally reveals how much damage his gun can do. This results in all 5 Gamma team members (orkney being a part of it now) flying through the air after the almost nuclear-like explosion that was just set off. The Toa of Fire and Plants is demolished. 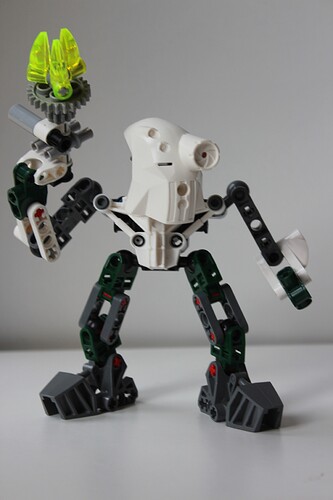 Orkney introduces themselves to the other members. “Red” becomes very protective of Orkney, as she does not want them to suffer the same fate as her.

And then that completes Gamma team. There are a couple of other members that were going to join, but sadly died in the process of being rescued. I do have canonical deaths of all these characters (except Ragged who after all the deaths, returns to the Hero Factory) but I won’t get into that because it’s sad 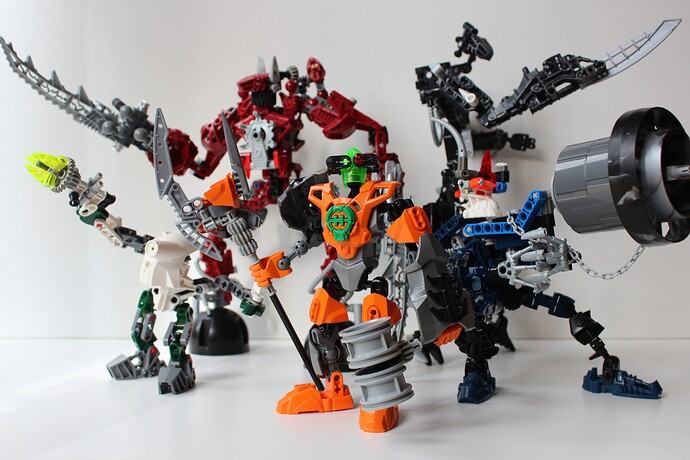 This was also a highly condensed version of the Gamma Team story, so I hope you enjoyed it. I realise there are A LOT of problems with these MOC’s, but I don’t really want to fix them as I am happy with the way they are. These were created when I hadn’t sorted out my Bionicle parts, so there are some better parts I could’ve used, but I couldn’t find them in the massive boxes of pieces.

I shall be posting my future MOC’s on this topic so look out!

and thanks for reading this far!

This is the Gadunka Warrior 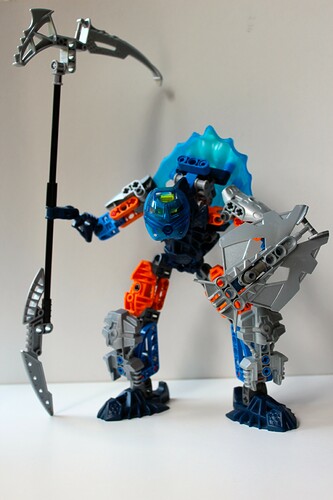 My inspiration for this MOC was

I pretty much succeeded with all of those goals, I used the Gadunka mask, I made custom joints (even if they are holey and terrible) and I made a custom body (it’s made up of just one angled technic bar.) 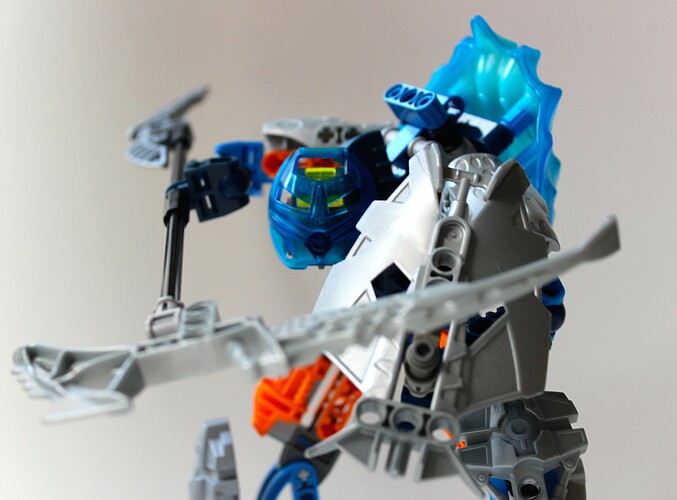 I have a very vague backstory for this one… You know in the Barraki series, those little underwater Matoran? Well this warrior was once one of them. During the event when Gadunka was shrunk, this little Matoran was watching and he was overcome by the power of this monster. (also by the power of the ignika) He took it’s mask off the seabed and strapped it too his back. The mask immediately took control of the Matoran and he grew into an almost toa like form. From this day forth, this now mutant Toa’s only mission was to kill the Toa of Stone. 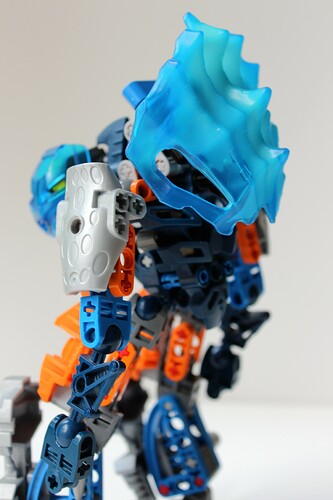 His weapons are just a Steel Spaxe (spear + axe) and a basic steel shield.

I haven’t made a MOC of the original Matoran, so just imagine the blue Matoran from the Barraki era with the mask shown in the picture.

These are great! I love the variety.

My favorite of yours is either Imp or Dark Umbra.

I don’t see really any problem with them. Except, maybe, for Dark Umbra.

Her stomach seems a little empty. But, if you can’t do anything to fix that, she is fine the way she is.

Looking forward to more of your MOCs!

Wow, he reminds of me of an underwater spartan hoplite

It looks good, but those gaps are easily fillable, just with technic elements.

If you could work on that, this MOC would look all the better.

As is now, it has a good look from the front, and a unique silhouette.

Excellent pictures! It really makes these MOCs stand out!

This is the previously mentioned Toa of Plants and Fire 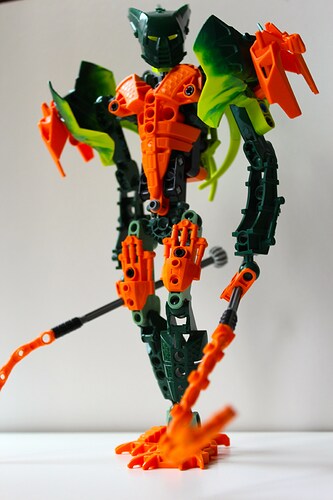 The name of this toa is Folium (I’m working on it) I can’t remember if this is a female or a male, so we’ll just go with gender neutral. This toa used to be a friendly and kind to their people, until some dark Makuta type force corrupted all the toa of the different lands with opposite powers. Folium was corrupted with fire and couldn’t control it. This resulted in them burning the entire village down. 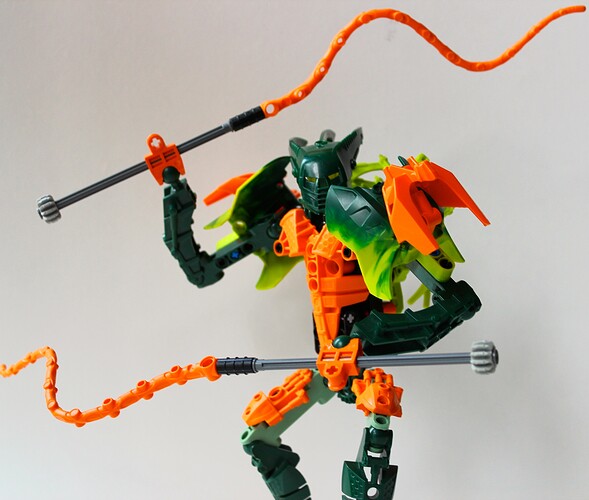 They’re weapons used to be two vine whips, used for fast travelling, while swinging through the trees. Now they are two lava whips, that can cut through mostly anything, leafing (thatpunwassobadslayme) anything it slices through, molten and burnt. 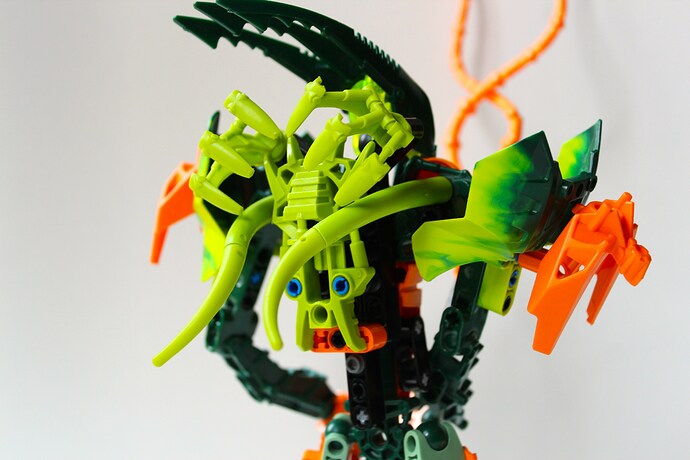 I made this MOC because I wanted to make a Toa of something and I wanted to use some green parts.

Not my finest, but still alright. 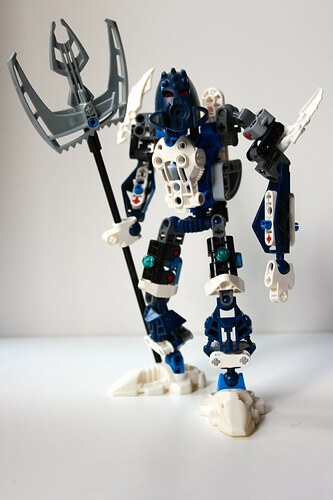 Stagnum is the Toa of Water who was corrupted by Ice and again she destroyed her village and her Matoran. Now, I would go as far as to say this is an incomplete MOC. I will tell you now, the only purpose of this MOC was to try a new thigh design and I think it looks alright! (not to square and not too thin) But then I sort of built a bionicle around it? It didn’t really work… 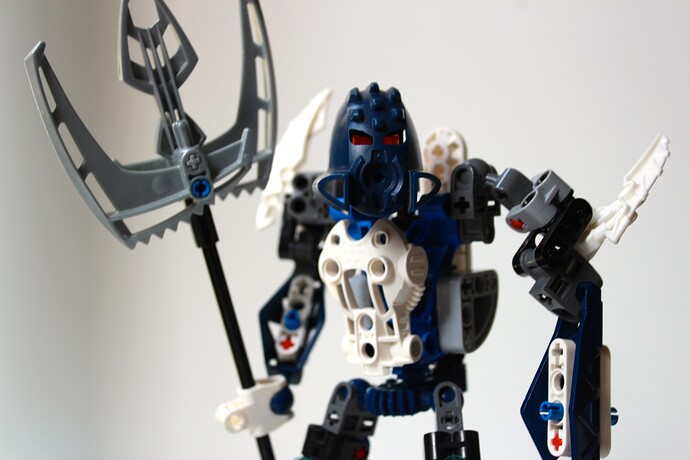 Nevertheless, she can do some cool poses and I’m happy with the simple staff of water I did. I hope you can appreciate her! 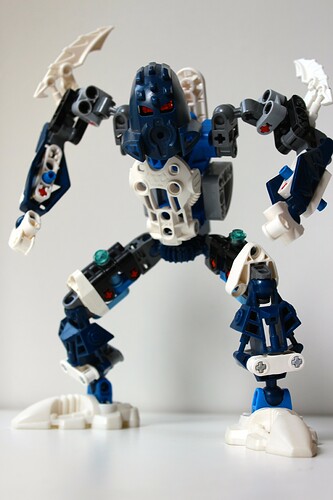 This one is interesting…

Some people might not like the bits that are sticking out. But, if it’s intentional, I think it works.

i want this in my house! this is an amazing moc!!!

Stagnum’s color organization could use some work, but I like the design in general.

I agree with @Chro about the colors, but I’m also not the biggest fan of the upper arms.

@Nyran I did the arms last and it was at the point where I didn’t care anymore. So yeah I agree, I’m not a fan of the arms either.

Stagnum is the Toa of Water who was corrupted by Ice

The color palette is fine - it’s just the organization that bothers me, as I mentioned.