A quick little revamp I threw together of the Rahaga - based heavily on their design from the movie. 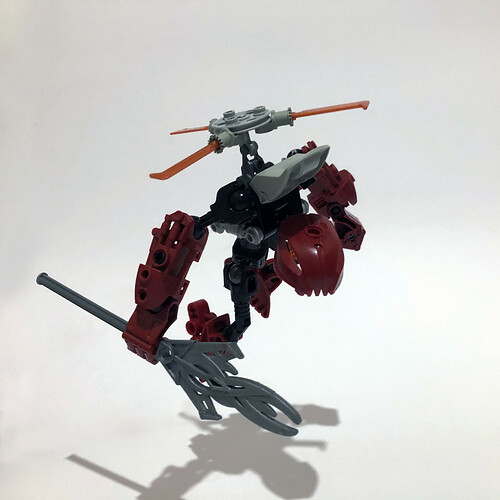 norik13024×3024 1.02 MB
I took some creative liberties, so while it’s not 100% movie accurate in terms of colouring and the exact propeller function, I think it’s still tastefully faithful to the source and I’m satisfied with the end result for the purposes of my own little project it was built for… 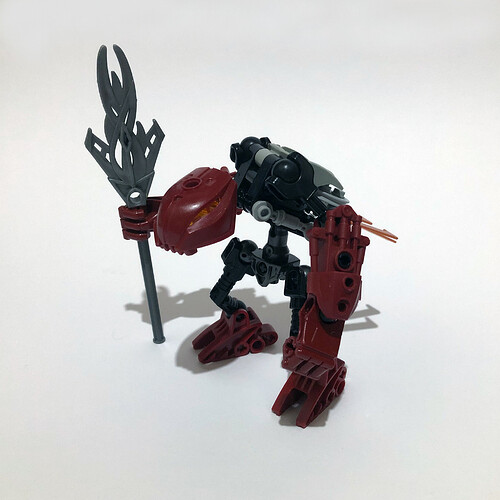 norik43024×3024 1.23 MB
I did however try to replicate the scale and the actual build itself as accurately as I could - to which I can confidently say I couldn’t get any closer to the source without having to use specifically modelled custom parts. 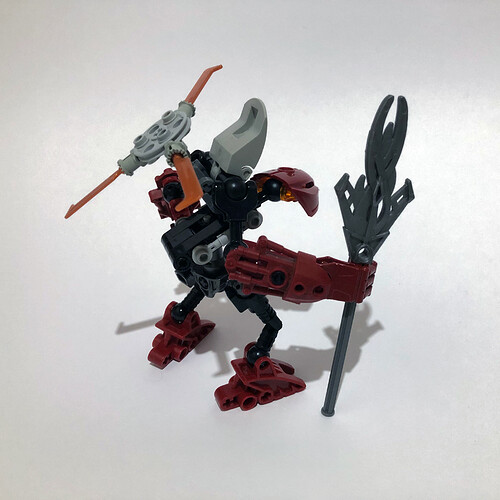 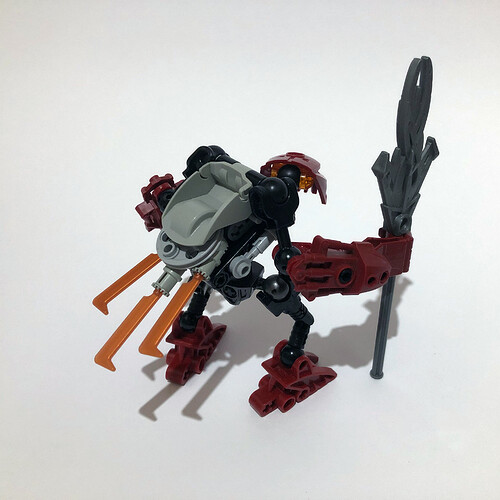 norik33024×3024 1.28 MB
At the expense of potentially giving away too much of my plan for the Rahaga in my project - I will say there’s a reason they’re the perfect “mentors” for the Toa Metru in their new Hordika forms. 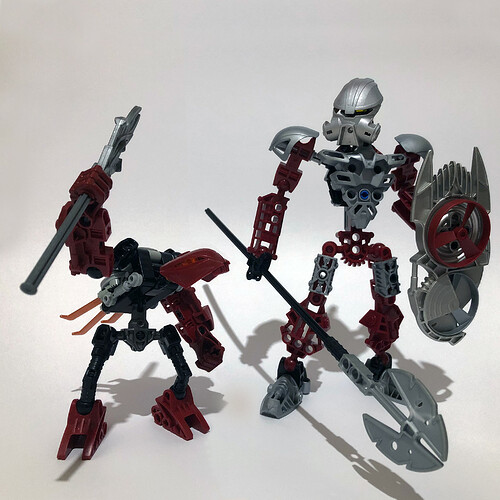 and if you’re intrigued about this “project” of mine, stay tuned…

Really, a lot of the design elements here seem a little familiar…

Can’t say it wasn’t an inspiration, but I don’t think I’ve even seen Trib’s again since he first posted it? Maybe again in passing if it’s been shared since somewhere I frequent? My recollection of it was in my mind as a reference maybe, sure. But I definitely wasn’t trying to copy his if that’s what you’re insinuating - these kinds of similarities are just bound to happen when two people make something based on the same design, with such similar goals in mind, within the same medium, and restricted to some of the same “required” parts, for one reason or another…

However, I aimed to accurately recreate the ‘build’ as seen in the movie designs, in the exact same scale, only compromising on the precise function of the rotor because it’s just not possible to completely faithfully recreate without instead compromising on the parts I was specifically aiming for accuracy with, and the colours as a creative decision (albeit, influenced by the availability, or lack-there-of parts in certain colours) - whereas Tributron prioritized the function, resulting in a design that is still clearly inspired by the movies, but also stylized, not as ‘literal’ in its interpretation of the original design, and not as close in scale.

I definitely wasn’t trying to copy his if that’s what you’re insinuating - these kinds of similarities are just bound to happen when two people make something based on the same design, with such similar goals in mind, within the same medium, and restricted to some of the same “required” parts, for one reason or another…

It is interesting you use the same technique for his rotor… And legs… And the same hip piece… Although using the chima head sockets for the hip attachment was genius. I might have to try that someday.

I’ll concede on the hips because that’s probably where I got the idea to use that specific part for it from because I know I’ve seen his before and liked the design, but their integration is completely different. (Slight tangent, but the axle shouldn’t have enough room to rotate inside that piece that his’ function relies on, it can just barely fit diagonally if you really force it - idk if he drilled away material or something to make that work or what…)

The knees were a result of trial and error. Looking at Trib’s again now, at one point the legs of mine were exactly the same, using the “titan socket” and longer shins but I didn’t like how long they were because it no longer fit the scale of my Rahaga. I’d also tried:

Ratchet joints just made the most sense at that point…

The technic part connecting the rotor blade being the same between both of ours kinda feels like a total fluke, because that’s the part that I had the biggest “eureka!” moment for when I figured it out last night… But I really don’t know what other way it could be done to get tri-blades while out and spinning, and then collapsed like a bird’s tail feathers when retracted - especially within that form-factor, considering I had a predefined, fairly limited amount of space I needed to be able to tuck the whole thing away under…

Although using the chima head sockets for the hip attachment was genius. I might have to try that someday.

In spite of your accusation tho I will accept this compliment, thank you!

Thanks!
It’s not quite the same as it is in the movie because there’s no way to connect it on top of the Krana holder part on the back, but I’m actually happier with the alternative I came up with than the original design anyway!

It looks like a very nice build, you did pretty good job on the finer details without relying on system, though i wonder if you would be able to fit in the throat pipe as well like in my build to make it look more like from the film. But now seeing this i kinda want to make the rest of the Rahaga now so that they can all fly. To spread them propellers and fly

Oh huh. Tbh I totally forgot about those pipes they had for throats, and must’ve missed it/wasn’t paying enough attention when re-watching the movie/looking at the bonus features character turnarounds for reference lol, but yeah, it probably could be done!
Not sure if it’d be as elegant as your solution tho due to the smaller scale…

Something I’ll have to tinker with.

And yo, I say go for it, would be pretty cool to see em all in motion! I plan to remake the other 5 like this too (as soon as I acquire more Ben 10 heads to butcher

true, but i will say in clarification every moc is stylized in reflection of the artist’s build style. However i feel that my Rahaga Gaaki MOC is more accurate to the film given the slimmer arms and shaping of the torso. The only reason it was upscaled is because the shaping and details required it to be so, and also scaling it with the official sets wasn’t a concern given i wasn’t making rahaga that looked like the sets. Yet rather from the film, big shock there

But again i do like your take, anything that don’t need to use system is always a plus for an action figure. also don’t forget the jaw, i wasn’t able to replicate it way back then but perhaps now i could make a custom jaw

Some pieces are just better at replicating the movie artstyle than others.