Raximoras, Chief Artificer of the Brotherhood

“An embarrassment, really. Sure his crafts were intricate but, at the end of the day, Raximoras was just a matoran in a makuta shell.”

A part of the Brotherhood of Makuta Community MOC Project 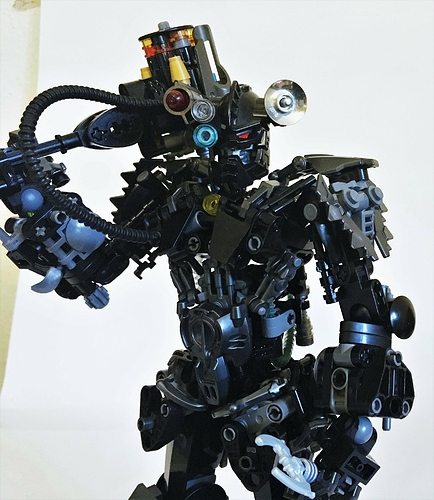 The air is filled with thick, acrid smoke and the maddening polyrhythmic clanking of heavy machinery at levels that would leave a human being gasping and deaf. Hot metal rotates on aerial conveyor belts. Millions of gearwheels, pulleys, capacitors and tubes clatter away while multi-tonne gears steadily clunk along behind - and in the centre, a stocky, humanoid figure hammers away at an anvil with almost religious zeal. This is the underground realm of Raximoras.
((And yep, he has a playlist >.>)) 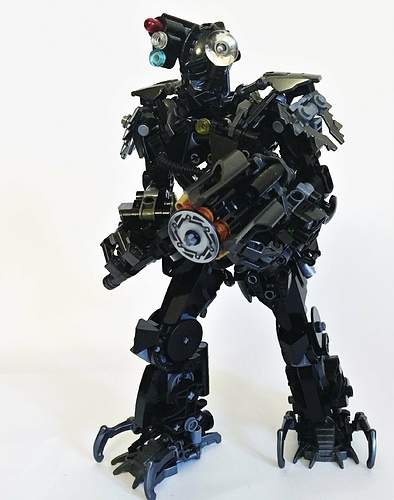 Raximoras is a curious makuta. While he shares his brethren’s arrogance and pride, he is extremely practically minded. He sees no point in scaring the “lesser” species of the Matoran Universe with fancy tricks, or making wierd creatures that will behave in ways that are not directly useful to the Brotherhood. 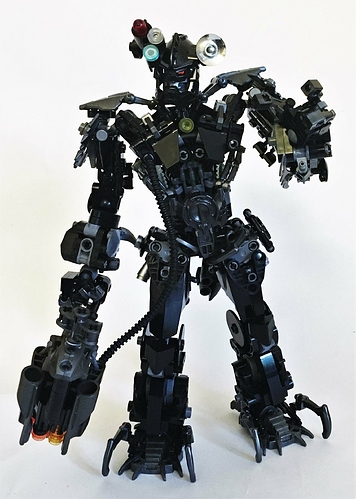 Raximoras creates things which are reliable. Tools, weapons, armour, vehicles and robots. War machines, doomsday devices. None of this fiddling about with rahi nonsense. While Zirolius designed the Brotherhood’s fortresses and structures, it is Raximoras that built them, alongside a small army of robots and hired matoran, both of which he would influence with his mask. 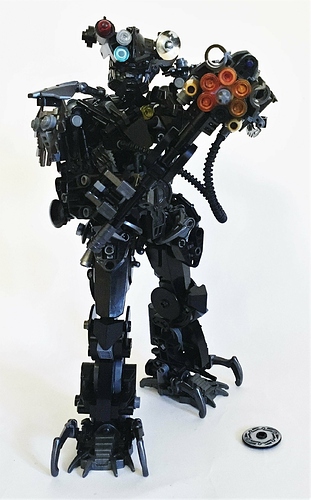 Because of his expertise with non-living technology, Raximoras bares the honourable title of Chief Artificer, though it is a role that barely any of his brethren actually want. While he does create wonders, they are just not interesting to most makuta, and the job involves repair duties that other makuta either can’t, won’t or don’t trust others to do. 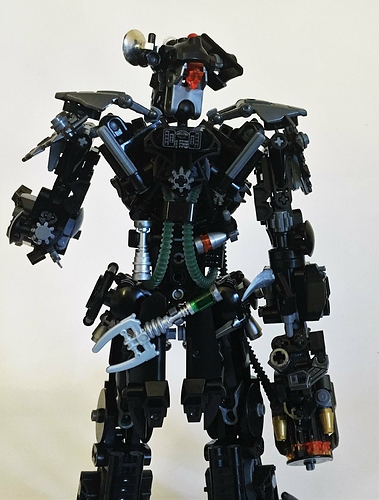 Raximoras arrived late to the Convocation where Teridax assumed control of the Brotherhood, though was actually happier with him at the reins. Under Teridax, Raximoras was given far more freedom to pursue his personal projects, and had little care for much beyond that. 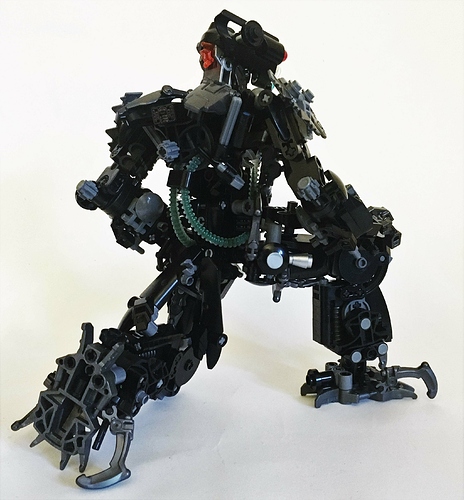 Following the convocation, the makuta purged their inner light and became creatures of antidermis gas. Raximoras was fascinated, but, as he was still getting used to it, Tridax recruited the Nynrah Ghosts to upgrade the armour shells for the makuta. Raximoras was angered by this, seeing Tridax as having gone behind his back to get outside help (and choosing to forget he was incapacitated at the time). 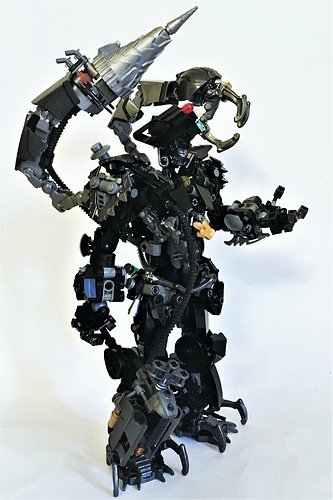 Raximoras modified his own armour shell, refusing help from anyone else. The result was a bulky, inelegant form that offended the other makuta in its sheer utilitarian appearance. Raximoras’ body was built with dozens of valves and clamps to attach robotic extensions he could control with his essence. A valve at his hip allowed him to control the flow of gas within, though it was certainly not comfortable. 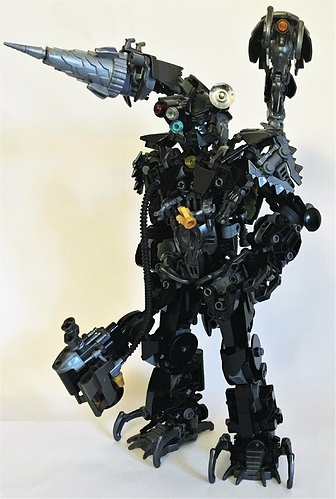 Raximoras continued his work, increasing efficiency with his more potent control over machines. He became absorbed in it. However, when the time eventually came to perform repairs on his fellow makuta, he was forced to finally examine the Nynrah Ghosts’ handiwork in detail, and was humbled. 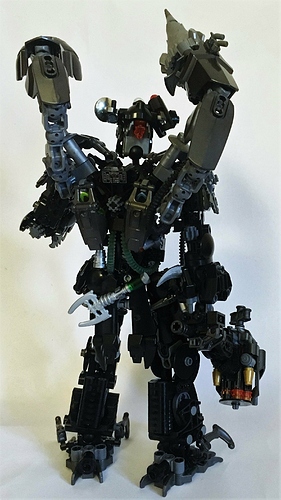 Raximoras packed up his workshop (a daunting task in and of itself) and traveled to Nynrah, determined to meet with the ghosts and see for himself how simple matoran could create something that was beyond him - Raximoras! The greatest smith in the universe! 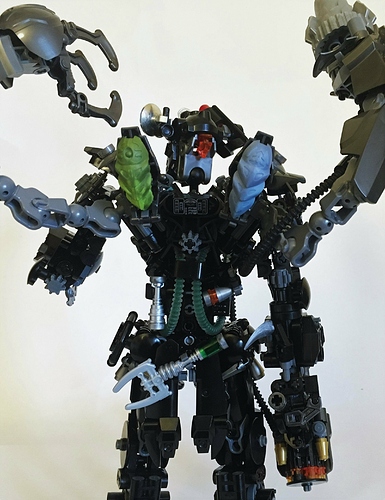 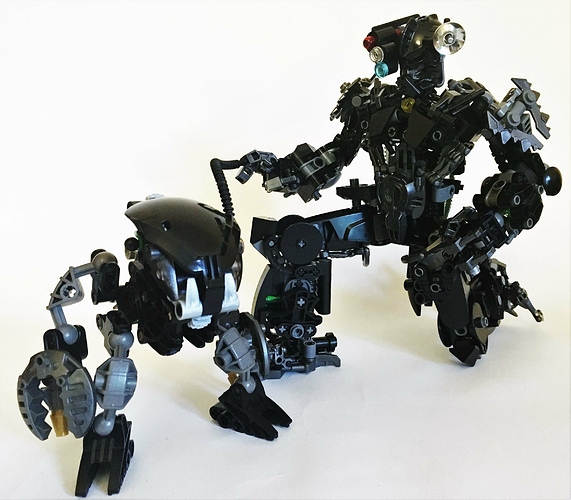 At first he maintained his humble ways, but over the decades his prideful nature resurfaced. He would challenge various members of the ghosts to contests of skill, and harp on about any victory while selectively forgetting any defeat. Those times he was called away on Brotherhood business would be a sigh of relief to the Ghosts, though they could not say his technical expertise was not useful to them in its own way. 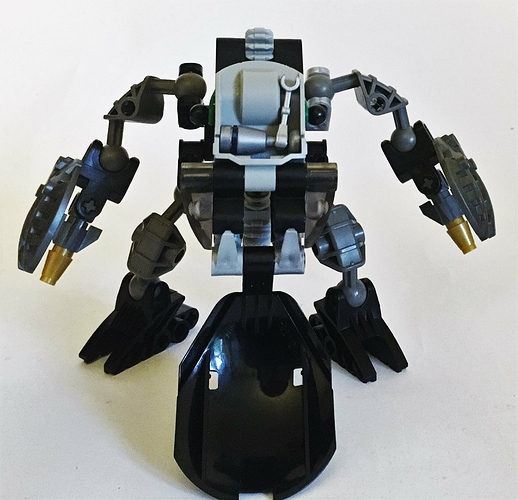 Raximoras assisted the Ghosts in the construction of the Fohrok. By this time, the Brotherhood had become wholly twisted and evil. When they learned what the Brotherhood intended to do with the Fohrok, they (without Raximoras or Tridax knowing) decided to sabotage the project. 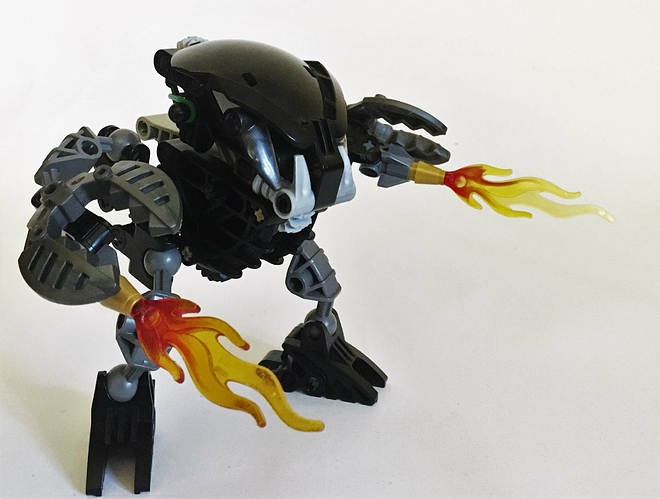 The Fohrok, running rampant thanks to the sabotage, caught Raximoras by surprise as he was working on them. Attempting to use his mask to command them, he found only too late that they were deliberately shielded from its effects, and the swarm overwhelmed him with their combined elemental powers.

The version of Raximoras that exists in the Cyclic Plane Universe is quite similar in personality but history plays out differently. Instead of moving to Nynrah, he is assigned his own island: a tiny spit of land off the end of the Tren Krom Peninsula and close to Korrothis. He upgrades the matoran, deals in technology and sets up a workshop under the island. He later sells the island in exchange for the “Toa Energy” from a particularly greedy toa of Plasma, on the condition that he still gets to live there. He spends a lot of time away from the island doing projects for the Brotherhood or just mining for fun.

In this storyline, Raximoras has a dangerous infatuation with Gorast which allows her to persuade him to let her invade the island. He is not killed until Teridax completes his plan and destroys all the other makuta in order to consolidate his domination of the Matoran Universe. 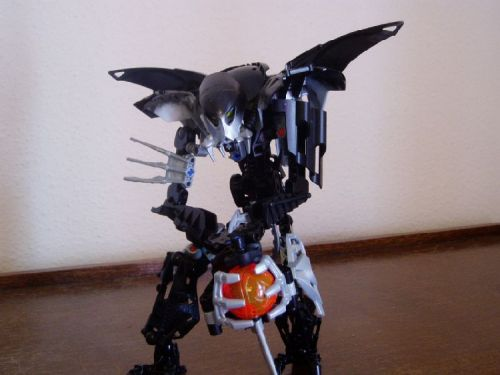 Raximoras is a very old character of mine who hadn’t really seen much development. He started off as an odd little hunchbacked character who made weapons, including the T’err Avorr Shadow Mortar and the Tridax Launcher, both of which were back in 2009 and are somewhat less-than-canon. 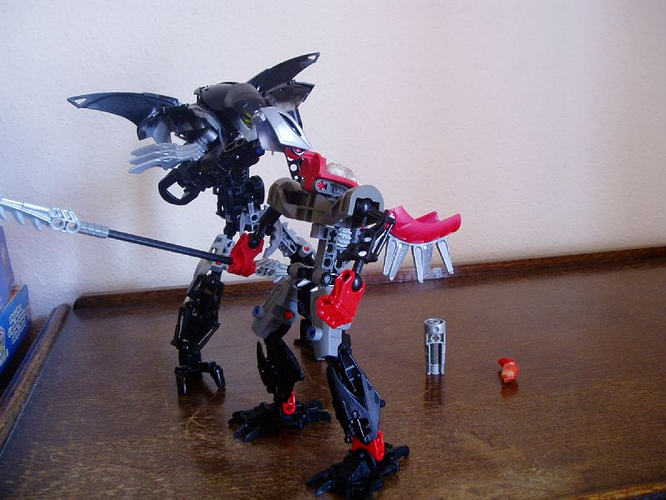 Raximoras also had a little part where he made rahkshi on the fly. The modern version can do this too, thanks to carrying two kraata and a little silver vial of energised protodermis in the same spot as the old 2009 MOC did. 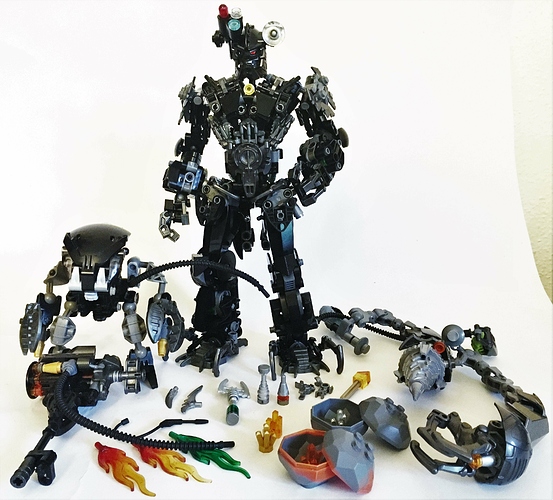 Raximoras has an INSANE number of kibbles. From left to right these are; Prototype Fohrok, Forge Hammer, Jets of flame and antidermis for the gold nozzles on the fohrok and hammer, a welding tool, a box cutter, a saw, an antidermis-powered wrench, a bottle of energised protodermis, various rocks and minerals, a thermal detonator, little robot arms that attach in the middle of his torso (these hold the welding tool), a minecraft torch, a mining drill and a claw arm. 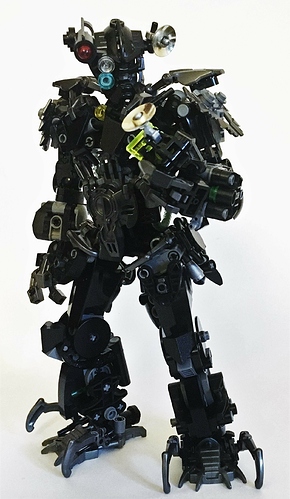 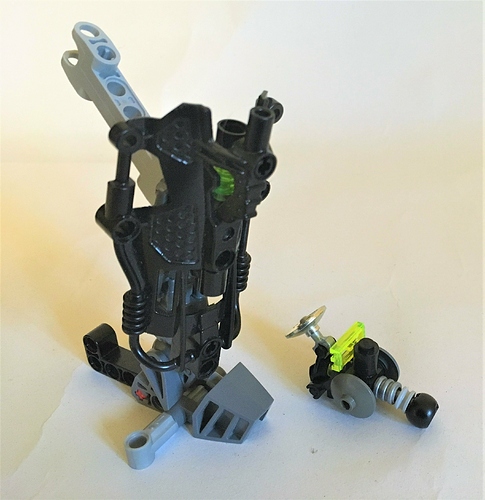 Wellp, that’s about it. Hope you like him and here’s to a few more coming hopefully!

@Gilahu please let me know if something needs tweaking backstorywise. 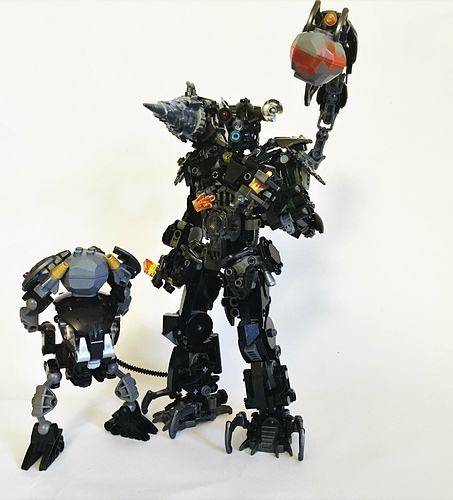 Interesting backstory. Love how this turned out.

Very, very good. I expected noting less from Gringat the Repugnant himself, but I’m beyond impressed. The kibbles, add-ons, and general aesthetic are wonderful in a way that looks messy without being messy. It’s clean in its own dirty way, and I love it.

Well, waiting for Raxoimoras definitely was worth it. Amost didn’t recognize him, though…

Looks a bit cluttered on first glance, but given the backstory it makes perfect sense. Even more so since it really makes his body look like a fully mechanical thing.
I personally especially like the back of his torso.

Otherwise I really enjoyed the backstory.

Love the legs though.

That’s exactly what I was going for! I’ve been working in several industrial sort of places over the course of the year and wanted to get across that feeling of dirty, greasy industrial machinery. Thanks

@DannyBoyy
All the other makuta had armour made by the Nynrah Ghosts, but Raximoras was too proud to let a matoran make his armour and did it himself. He’s overly practical in his building methods, to the extent that the other makuta think he’s little more than the soulless machine he resembles.

@Gilahu
Fixed, and thanks! It’s been a pleasure.

@Kan
Thanks! Tried basing them off the Dwemer armour from Skyrim. Not sure how much resemblance the final version has kept.

While Zirolius designed the Brotherhood’s fortresses and structures

Moc is pretty neat too