This MOC is a combination of the sets Onua - Uniter of Earth and Skull Basher. It uses parts only from these sets. 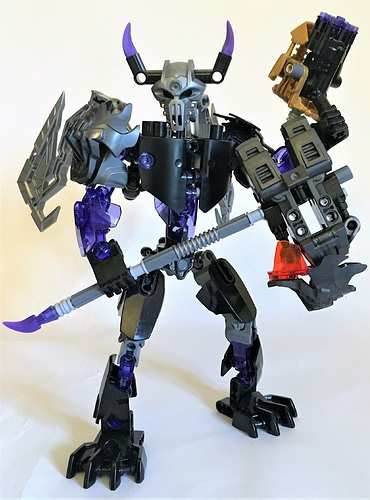 Rira was a hero of Okoto in ancient times. She was so strong she could wield her two-handed Magma Hammer in just one hand, and is said to have used it to mine out some of the oldest and largest tunnels that run under the island. It’s more likely that Okotan engineers did that, but the legend lives on. 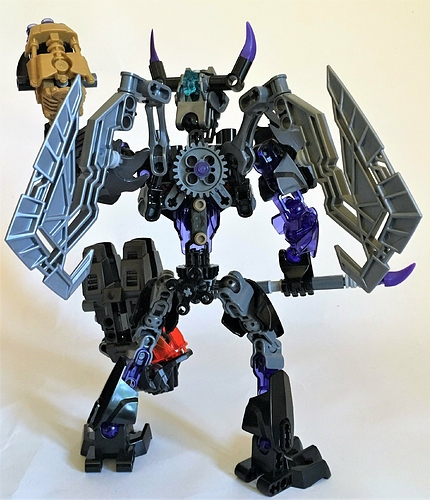 Her blaster weapon was created by Makuta and could fire shadows. Quite how this was posssible isn’t known and it is more likely a fabrication, but many old tales tell of her using the gun to make areas of darkness. Some tell of it as chilling and evil, and others as warm and comforting, depending on the tale. 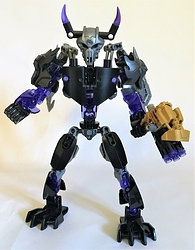 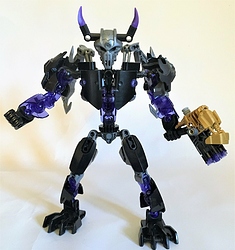 Rira’s most famous adventure tells of how she wrestled a giant, flying serpent out of the sky, after it ate her mask and several others’. And then carved the great beast into parts to give to every single village. Some villages claim to still have parts of the beast. Old relics of a lost age. 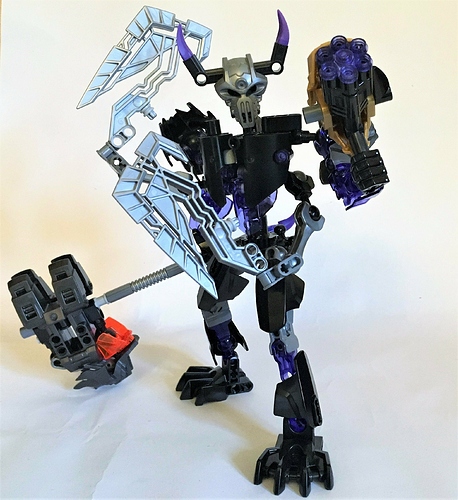 Rira’s final battle was with Kallithrixis the Star Stealer. She and her sister fought her on top of the highest mountain on Okoto - though while she was strong, Rira was no match for Kallithrixis. It was her sister’s cunning that won the day, but not without cost. Transformed into a star, Rira now follows Kallithrixis across the night sky. 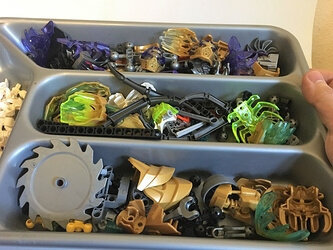 Parts left over from Onua and Skull Basher in the top compartment. 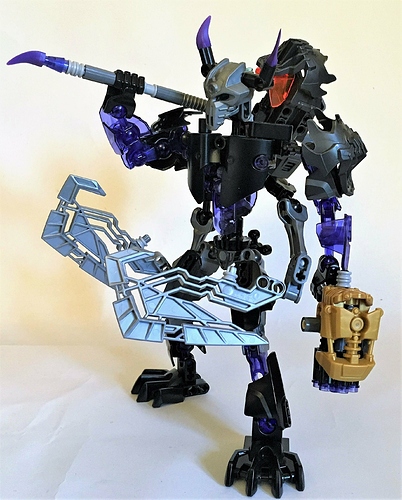 Rira has the 2016 toa’s waist articulation function, mask function and a working blaster. The chest is able to split open and the shoulders can widen to allow extra room to bring the wings under and use them as dual axes!

Nice! My only complaint is that the gold is a eyesore.

For a combiner, this is quite a solid model! I like the colors, and the use of the technic panels as chest armor. Despite being the only gold, the blaster looks great.

Yeah, its a nice color.I feel if you added more it would look so much better.

Despite being the only gold, the blaster looks great.

Yeah, its a nice color.I feel if you added more it would look so much better.

I feel pretty strongly that weapons DO NOT NEED to share their wielders’ colour schemes. They’re simply items that the characters own, after all. And a different colour on the weapon helps it stand out in pictures much better, since the material and texture are nearly always the same as the character.

I understand where your coming from, but if you balanced it out, it would look like a set of armor.

I feel pretty strongly that weapons DO NOT NEED to share their wielders’ colour schemes. They’re simply items that the characters own, after all.

I strongly agree with you there. The only reason I pointed it out was because it stook out a bit much for my liking, but that’s understandable since it’s a combination model.

Looks nice for a combination model.
The weapons are cool.

Pretty good, my only complaint is the thinness of the waist, but I suppose that’s the base torsos fault.