This MOC is a combination of Kopaka and Melum - Unity Set and Skull Scorpio. It uses only parts from those sets. 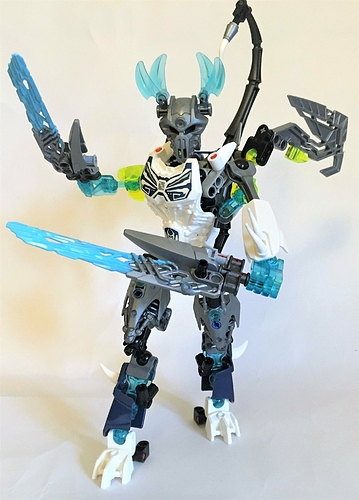 Rire is the sister of Rira. She is a warrior and hunter who lived on the island of Okoto in ancient times. 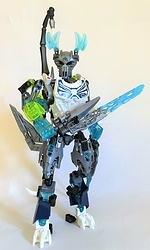 Her Crystal Swords struck with the power of starlight. She was fabled to be so quick with them that they left multicoloured trails of light behind her as she moved. 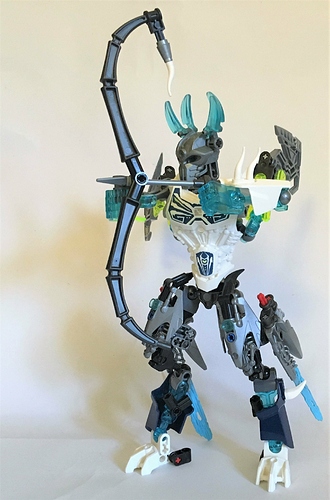 Rire’s was so accurate with her bow that she could fell a star from the sky. One tale tells of how she was challenged by Umarak to see who was the better marksman. 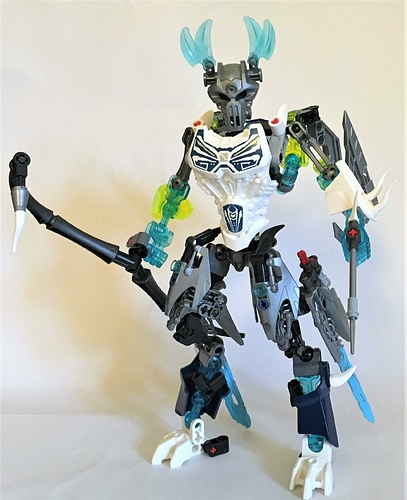 Accepting his challenge, Umarak started by boastfully hitting a target six times in a row in the same spot. Rire fired only once, and missed, but a few seconds into Umarak’s gloating a star fell from the sky and destroyed the target. 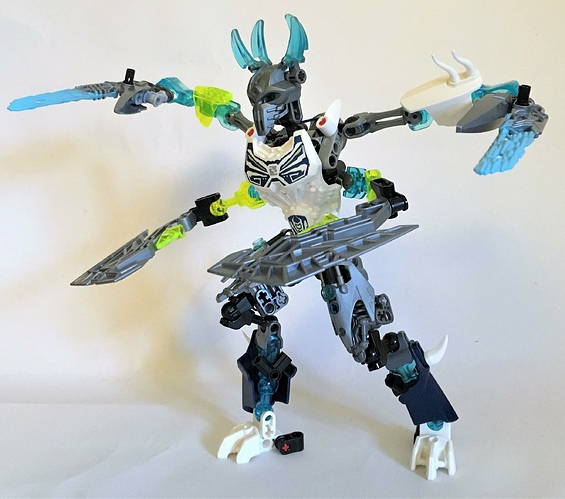 Rire’s final battle took place atop the tallest mountain on Okoto, against the fearsome Kallithrixis the Star Stealer, who plucked the stars from the sky one by one. Rira attempted to best her in combat and was defeated. Rire, knowing of Kallithrixis’ weakness for riddles, tricked her. Quite how the riddle goes different depending on the tribe telling the tale, but the end result is the same - Kallithrixis was transformed into the red star, with Rire and Rira also becoming stars and following her across the sky. 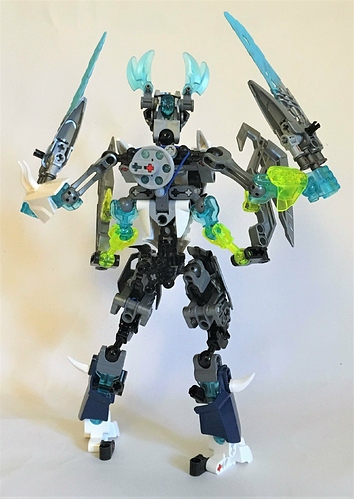 It is said that shooting stars are arrows from Rire’s bow flying down to earth. Thus, she is believed by many to be the being that sends down beings from the stars, like the Toa, to battle evil.

Parts left over from both sets are in that middle compartment.

Rire is by far the most complex out of the three winged combination MOCs I made together here.
Her weapons can be stored on her body when not in use, the mask and waist articulation functions remain from Kopaka, and she shares the wings into secondary arms feature Rira has. 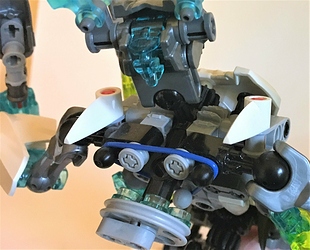 IMG_0071.JPG2324×1874 654 KB
Rire also possesses a fully functional gearbox which allows both arms to swing in opposite directions. The rubber band helps them return to a stable middle position, since the gears don’t have all that much friction.

EDIT: No matter what I do, that fourth picture refuses to behave. I’ve tried reuploading it, resizing it, moving it around, but it always ends up in that weird position with most of it cropped off. Still works if you click it though.

Not bad, I like the look of the small horns and the leg design.

I love how this looks, I would like a gif or a video of the function, the only thing I dont really like is the colorscheme, but it’s not like you could do much about that

Not your best work imo. Nice colour scheme tho, reminds me of Storm Beast’s

Not every build is an attempt to best what I’ve done before.

@Asriel
Sadly she’s already been disassembled or I’d totally do that. As was, it worked just like the toa mata, but this part tended to catch against other parts in there and make it judder a lot.

I think that this is a really great combiner!