Sentrakh and The Shadowed One MOVs 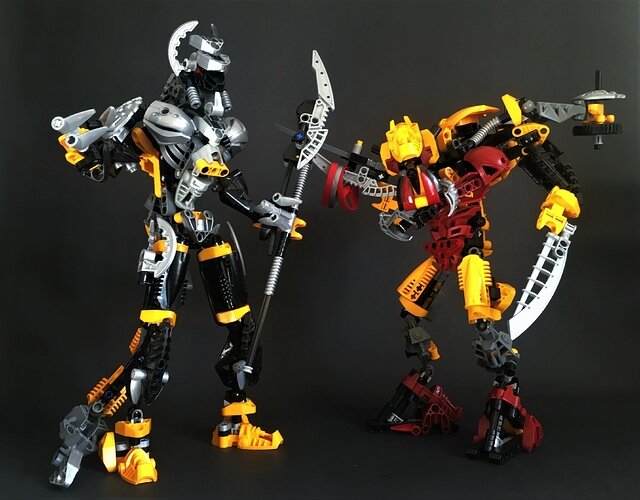 These are my own versions (MOVs) of Sentrakh and The Shadowed One, Dark Hunters and combiner models from 2005. Each uses parts from Keetongu, then Sidorak for Sentrakh and Roodaka for The Shadowed One. My versions also still have that restriction - I didn’t add any extra parts, except maybe for some extra rhotuka spinners.

The Shadowed One
The original from 2005: 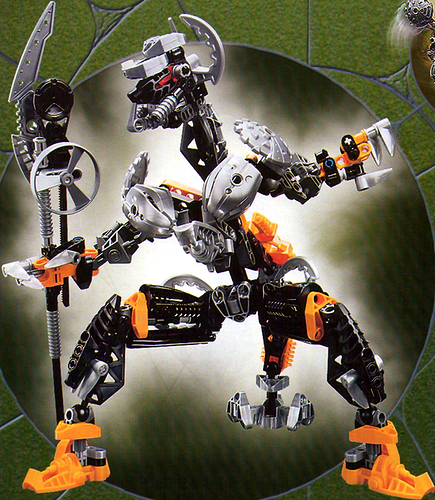 TSO was a tricky one. I wanted to try and evoke a more regal appearance, which meant a straighter posture. There’s a lot of argument over whether he’s a tripod or that’s just a weird tail - I went with tail and lengthened it. 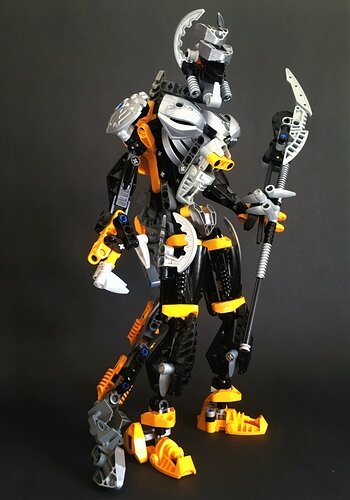 IMG_0804.JPG2647×3775 1.22 MB
I moved the weapon to the left hand and reworked the hands so that the left is able to close around the weapon. This way he can even sort of pull it out with his right hand as if he’s firing the spinner himself. Turns out the chest makes a great basket for holding onto more spinners and I added some pins in there to help keep them in place as well as filling in behind the shoulder pads a bit. 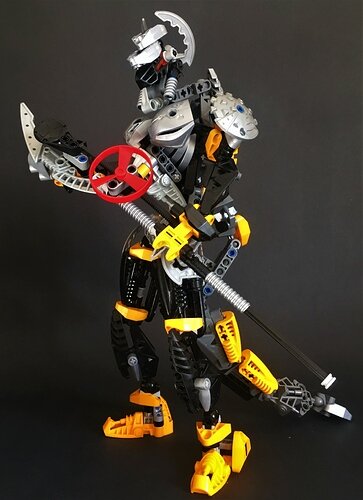 IMG_0803.JPG2508×3452 987 KB
Styled up the legs and torso a little, adding the glow-in-the-dark stud to a heartlight and flipping the metru foot on the chest, and adding wasp-like stripes of keetorange there. i kept the grey limbs off Keetongu to the back to form the spine of the model which ends in an arrow-tipped, lizardlike tail. 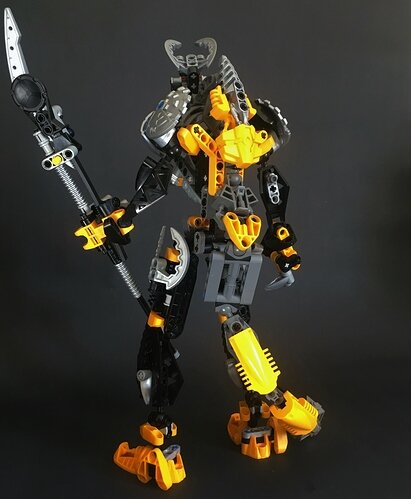 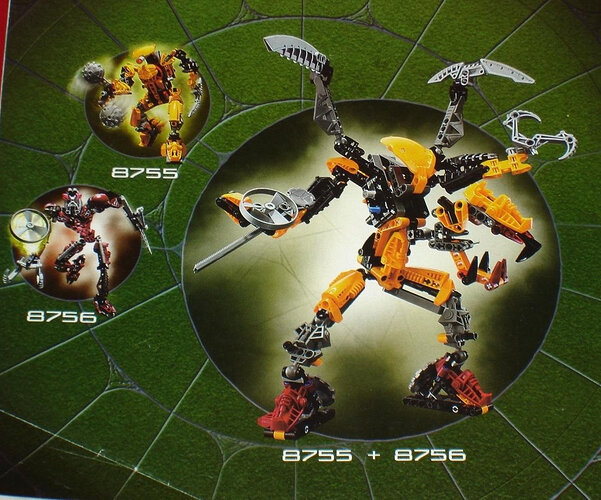 Sentrakh is weird, but the model seemed very unfinished, and the way the original was designed, those blades couldn’t really reach down to toa level or anything. Decided to move them to his main arms so that they could be more effective as weapons. 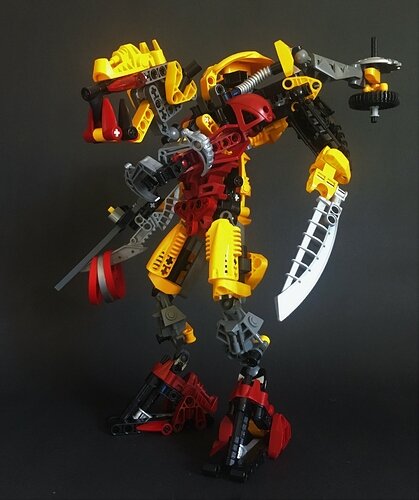 IMG_0796.JPG2589×3089 930 KB
He also got a whole new pair of arms on the front. He can cross his arms! The back/top set got a pair of rotating gears that act kind of like turbines. I can imagine him using them kind of like a jetpack to jump from place to place, though since he’s so heavy I don’t think they could let him fly long distances.

The chest and legs have been modified with different armour and the latter given a more digitigrade look. There were a lot of red pieces that were left out of the original and I felt they needed to be included. 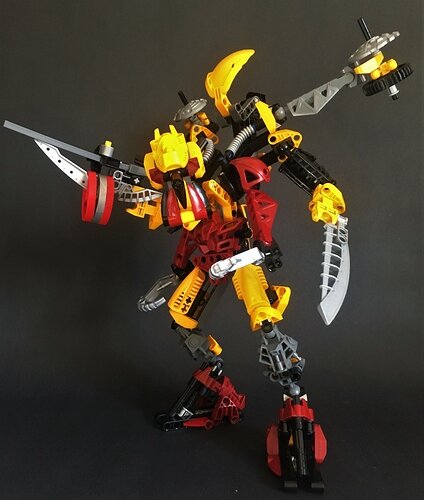 IMG_0797.JPG2856×3367 1.13 MB
As added functions, his weapon is able to store a magazine of rhotuka spinners underneath - there’s enough pressure between the ripcord and the blade there to keep them from falling out. It was important to me that both these guys have some way of storing extra spinners on their person.

Sentrakh’s weird hump has been adapted with a natural rhotuka launcher that can flip outwards too, though it can be fired from either position.

Overall quite happy with how both of these turned out. This started with me just wanting to make the old combiners since I never did that before.

Great work! They are both massive improvements from the originals! Especially Senteakh! But The Shadowed One is probably my favourite. I just love how well he made that tail!

They look so accurate, yet so upgraded!

I can hardly believe how much better TSO especially looks basically just with a different torso and tail.

Given that this still is a combiner, though… wow. Makes me actually want to give my TSO revamp a torso that’s closer to the original as well. Unfortunately I’m lacking the parts at the moment…

I don’t know what I can say that hasn’t already been said, they’re fantastic.

I love when builders challenge themselves to work with a limited set of parts. Combiners are no exception, and these models are really excellent. Well done.

They both look great!!!

I’m pretty sure its a tail, but… it is controversial so I’ll leave it at that

I mean, I think it’s a tail, but it looks like a tripod. It’s probably a tail that functions as a tripod in set form. I guess

that might be where the confusion comes from.
I think it was stated somewhere to be a tail, but its somewhere obscure and as a model it functions as a third leg? I dont actually have the model (though I want to make a version of it) so I could be wrong.

The way the set is built, the back limb is locked at an angle and can’t move like a tail thanks to the double balljoints back there. But TSO has been drawn as sitting down in a throne, so clearly his body doesn’t work that way in canon - or he has a throne with a hole in the back.

Mixed feelings on the Sentrakh build, but that TSO is simply exceptional. Well done.

Regarding the tail/tripod debate, I’ve always liked to imagine it as a sort of multipurpose limb (so it’s a tail that he will also use like a leg, especially now that he’s been unnaturally aged thousands of years.)