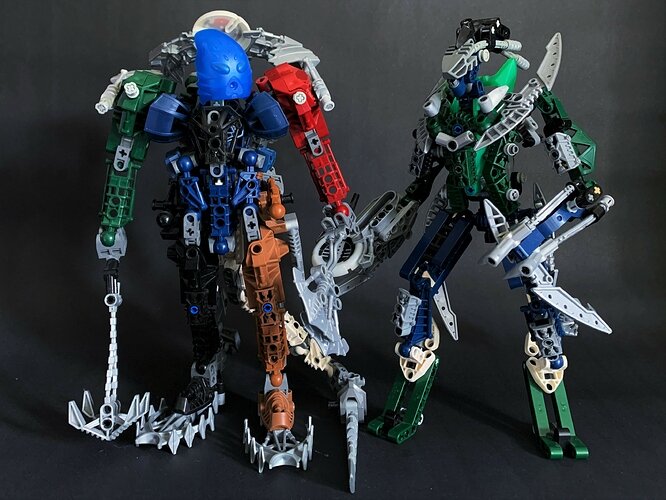 These are my attempts at combination models for the toa and titans from 2004. They were meant to be coming up shortly after my Sentrakh and Shadowed One MOVs, but university got in the way. Sorry about the dust! 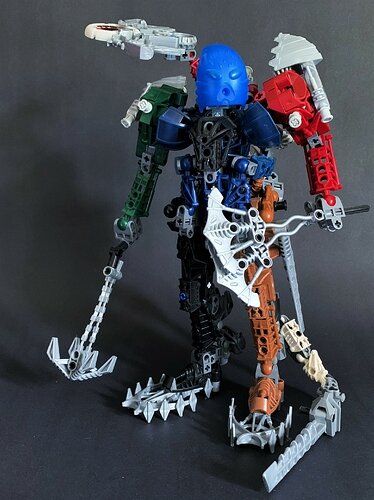 IMG_04442190×2921 1.22 MB
A hypothetical look at what a Toa Metru Nui could look like, if we ignore the fact they didn’t have enough discipline to form a kaita let alone a nui before they became turaga, and there weren’t any toa nui in the main story. There was Krahka, so this MOC could be seen as an alternate version of that. 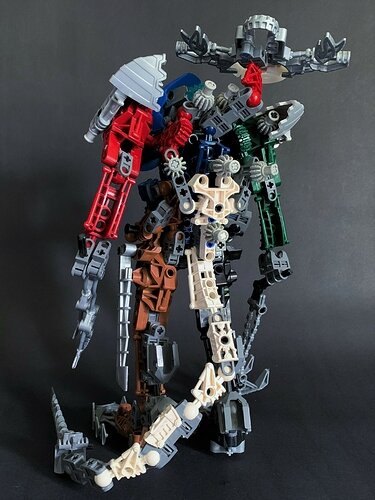 IMG_04432214×2952 1.21 MB
Goals with this MOC were to create a more cohesive combiner model, for a team which are in better control of their abilities. All the weapons are used, Nokama’s mask picked simply because it’s a different colour to the rest. 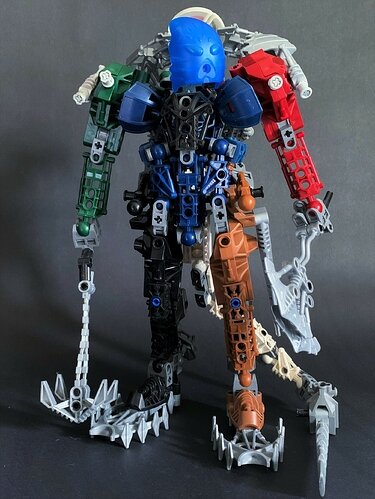 IMG_04422001×2668 1.03 MB
The separation of colours Megazord style still speaks to each toa retaining a bit too much of their own identity in the combiner though (besides looking cleaner), as well as the reversal of bushings on the left side. I see Matau as one of those people who leaves the crinkly part facing out. Heresy!

The gearboxes in the chest and shoulders connect up to make a load of gears turn. This can give the arms some momentum but there isn’t that much friction there. 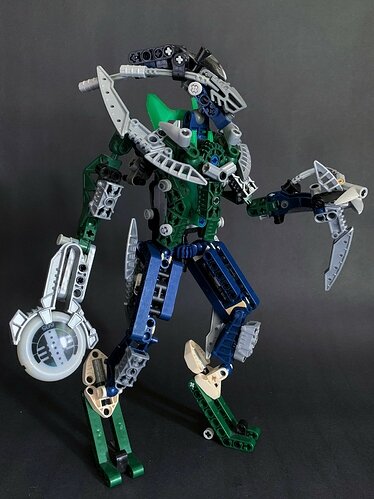 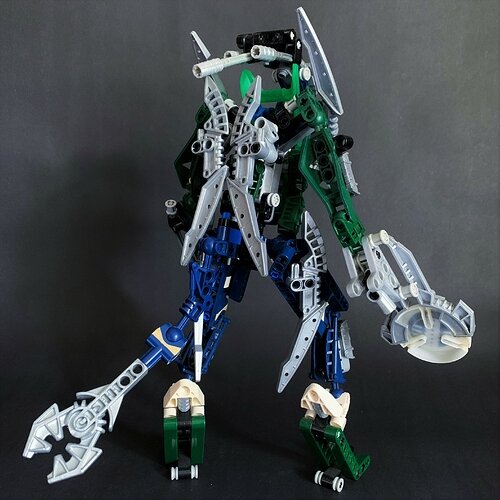 IMG_04472888×2888 1.51 MB
Apart from the robotic one, both hands can hold her throwing daggers (the left even has a mechanism to close the fingers around it). They can also be stored on her back, legs and, if you don’t mind ruining the collar, chest as well. 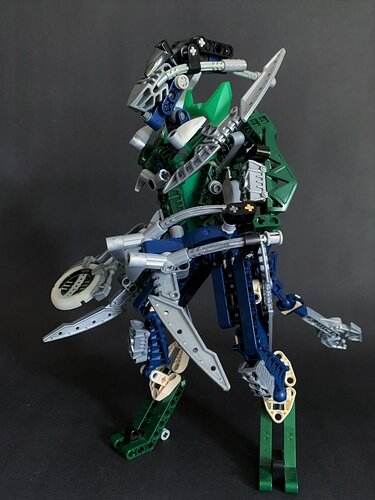 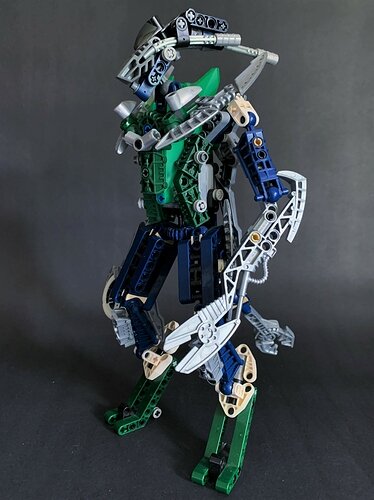 IMG_04502874×3833 1.16 MB
I can see some incoming flak about using the vahki head for her, especially since she’s meant to be able to wear kanohi masks - but Roodaka can as well so having this head shape apparently isn’t a barrier to that. Of course if I wasn’t combining two sets I’d be approaching the character differently!

I urge anyone who wants to try this not to include the original silver technic parts. I had a few of them crumble and shatter on me.

Is it just the lighting or are all those white parts really discoloured?

Ah, ok. I should probably try to make that Toa Nui some time.

These are both fantastic.

I’m especially fond of the Toa Nui, I’ve long thought that the Metru build didn’t really lend itself to humanoid combiners, but this is a strong argument to the contrary. Also appreciate Nokama being the head/core of the fusion, given that she was literally the glue that held the team together.

The weapons are great, the flail on one hand and the axe-looking thing on the other.

Additionally, while Toa combiners have never exactly been cohesive, but between the colour blocking and the solid-ness, this looks better and more stable than either of the Kaita or Nui combiners we’ve had in the past.

Meanwhile with Lariska, I’ve loved the idea of her being a combiner between Nidhiki and Krekka ever since TSO1’s video, and I think this is a great take on the idea. I love the function on the left arm, and the Vahki skull in her chest. Also a big fan of her looking agile and speedy without making her super-skinny, or adding a bunch of unnecessary sexual characteristics that I fear the eventual contest will be bogged down with.

I’m less fond of the head, especially since AFAIK it’s been confirmed that she’s not a Vortixx, but like you said, the parts selection for a combiner is limited, and the rest of the model is good enough that I can look past it.

You did a great job using the given pieces in a creative and sometimes non-conventional ways, just curious, did you use the entire parts inventory of the two sets when building Lariska? 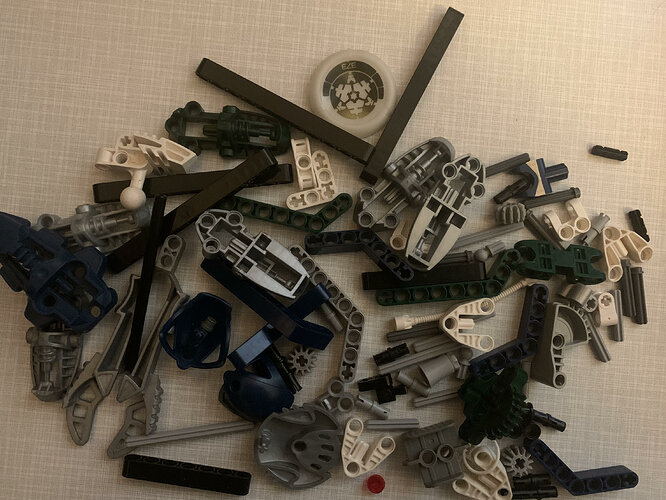 @ToaArcan Thanks for the in-depth comment! Really appreciate it.

So I found the video you mentioned!

Interestingly, we must have had the same idea around the same time! I’d released some WIP photos of her on the MasterPiece Discord back in September 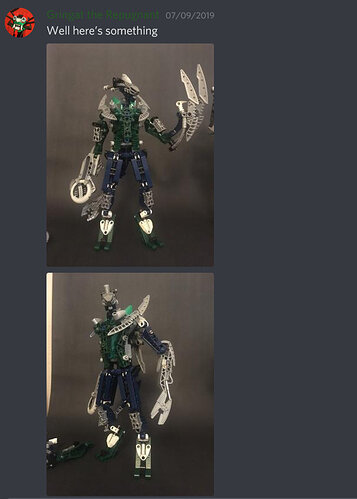 Having built TSO1’s version I have to say I’m not a fan.

I like the Toa Metru Nui build overall! I think you were able to use a lot of pieces from the different sets without it becoming overwhelming, but I feel like the extra Hydro blade and Proto piston weren’t necessary, I think just one of each would’ve been fine.

I think I enjoy this better than TSO1’s. You have plans to release instructions for that Lariska?