This moc started out as this thing…

Due to lack of interest in my moc series, I am discontinuing it. I will still post my self moc later on. I have scrapped most of the other mocs in the series though. I felt that if I took the photos on my porch on a sunny day, the quality would be better. I was wrong... [image] I also needed a setting, so I threw in a custom skeleton and flag. The skeleton is only supposed to be viewed from one angle, so it is (pun intended here) very bare-bones. The idea is that this used to be some sort of archer... [image] [image] The flag is also just a tacked on moc for the setting. [image] [image] With the actual figure in the moc, the axe and shield are also kinda tacked on, the sword is the only weaopn I am displaying this moc with (outside of these pictures). This guy doesn'…

On that post, a nice member of the message boards by the name of @Ninjanicktf said that:

You should either use a lamp or move the picture setting to where the sun strikes the front of the moc (or anything you want to photograph) or even flash if you have it.

So, for the second version of the moc, I followed his advice. I set up a lamp in front of the moc, and turned on the lights in four rooms of my house (these photos was taken in a hallway). Well, the quality is still extremely bad, but it is a vast improvement. So, thank you very much @Ninjanicktf

This moc is still named Silas, but he is now a Hunter, Gunslinger Class Guardian from Destiny. Without further ado, here is Silas, Honourable Guardian : 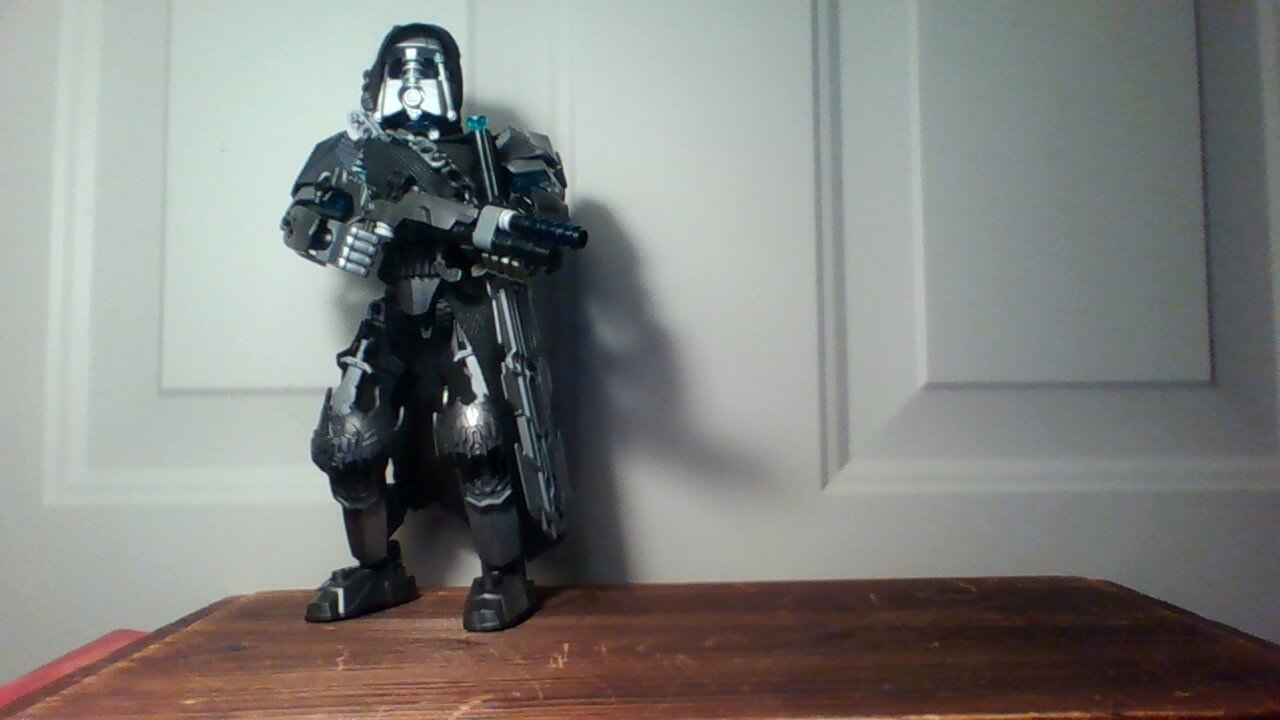 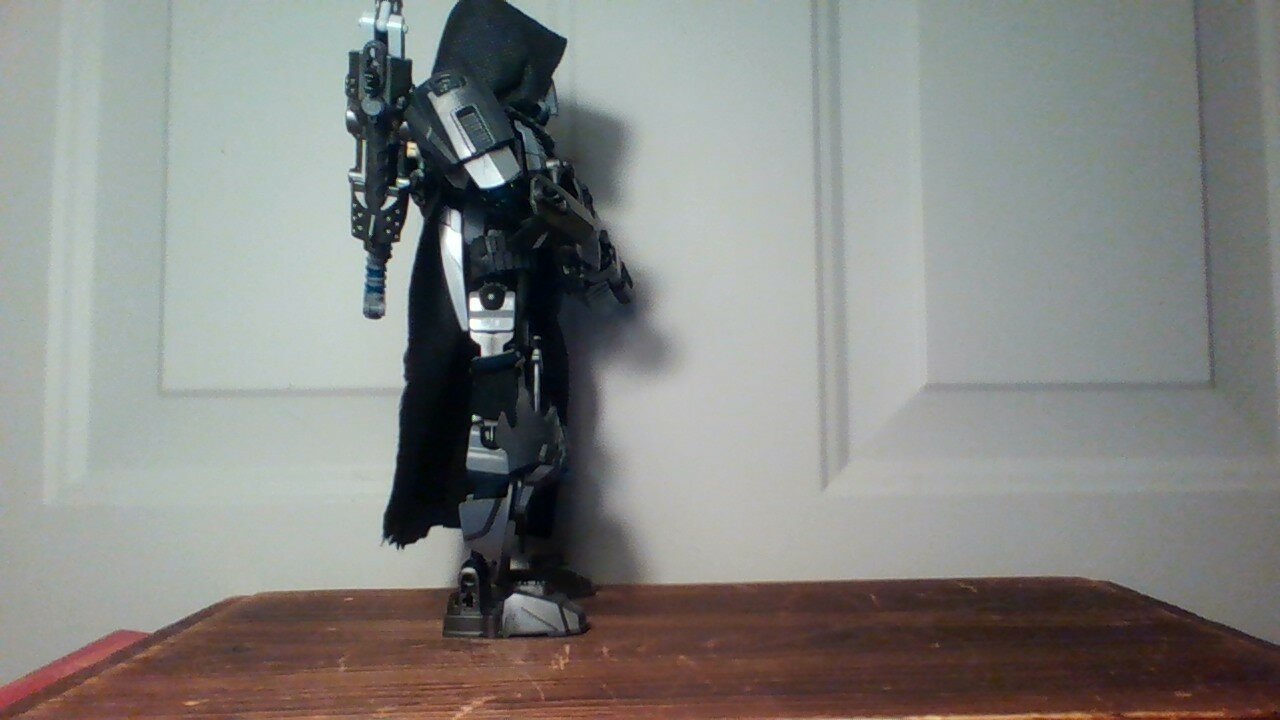 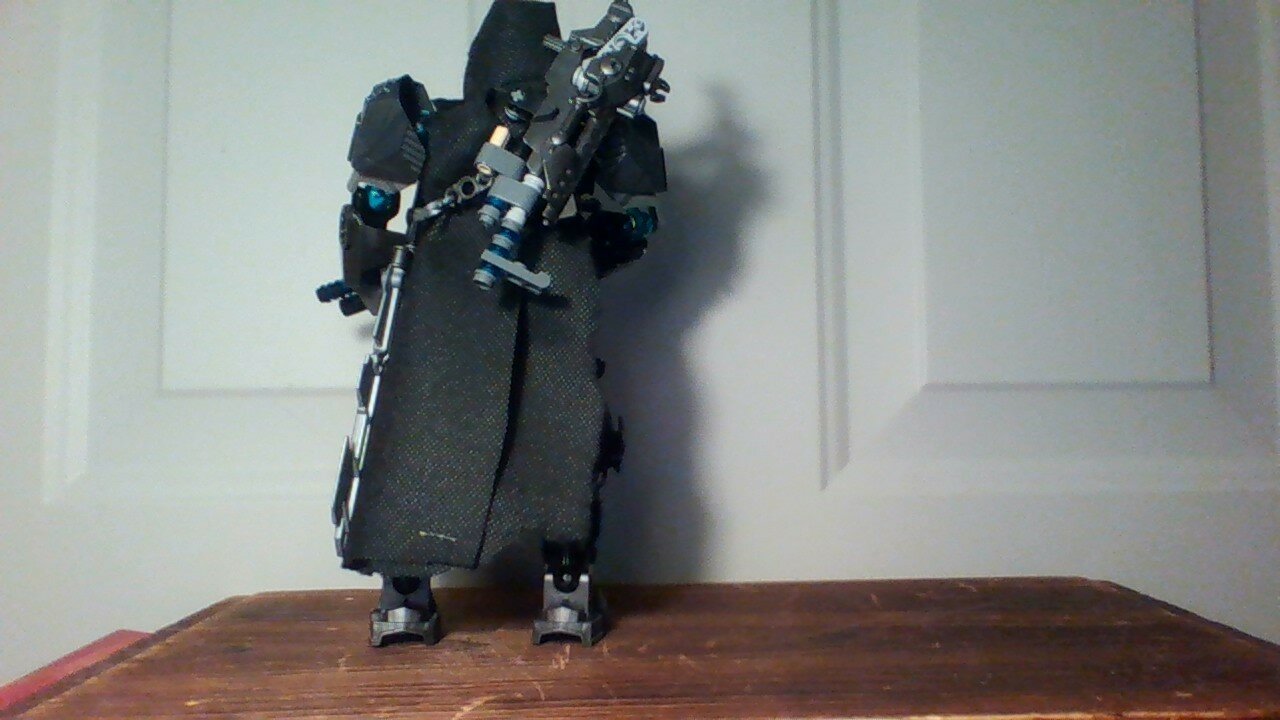 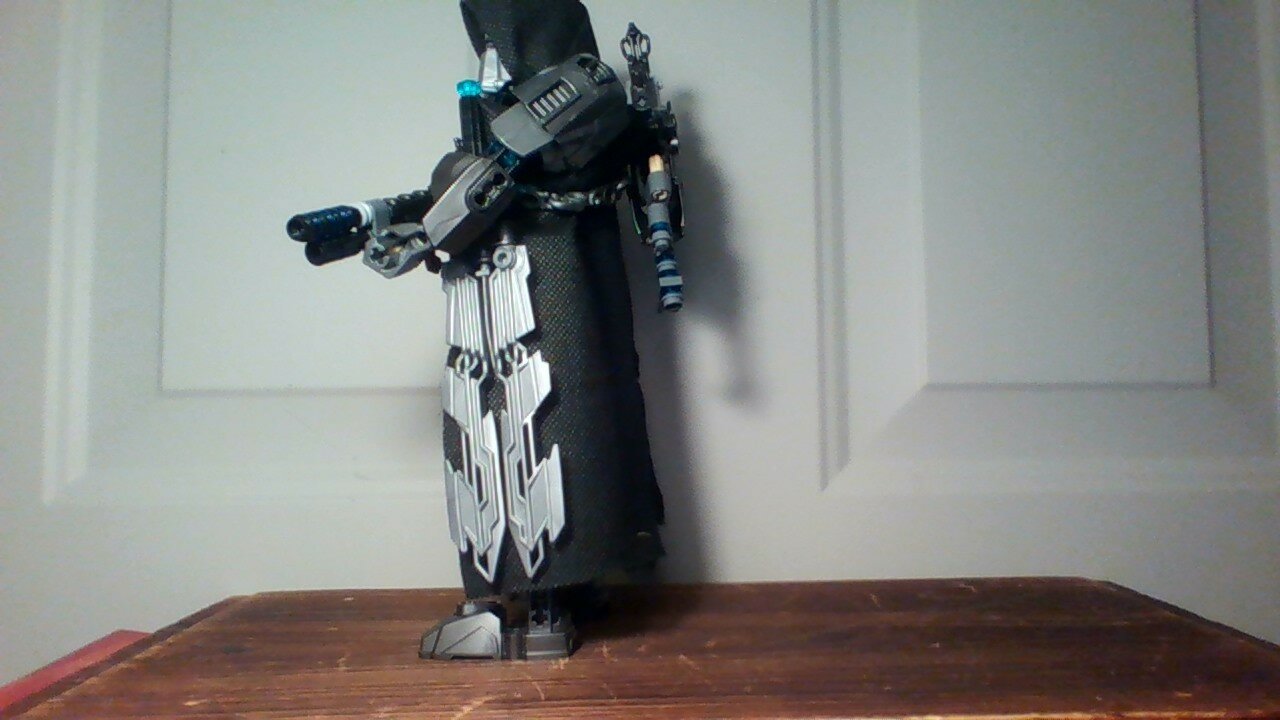 Since I posted the previous moc, Silas has acquired a Hunter Cloak, Auto-Rifle, Shotgun, and a new helmet. His helmet used to be one of the armor add-on pieces that are used on his knees. It is now a 2015 Toa Armor piece. Check the original topic to see how the head is constructed. I also changed up his arms a little bit. The top CCBS bone is now trans light blue instead of black. 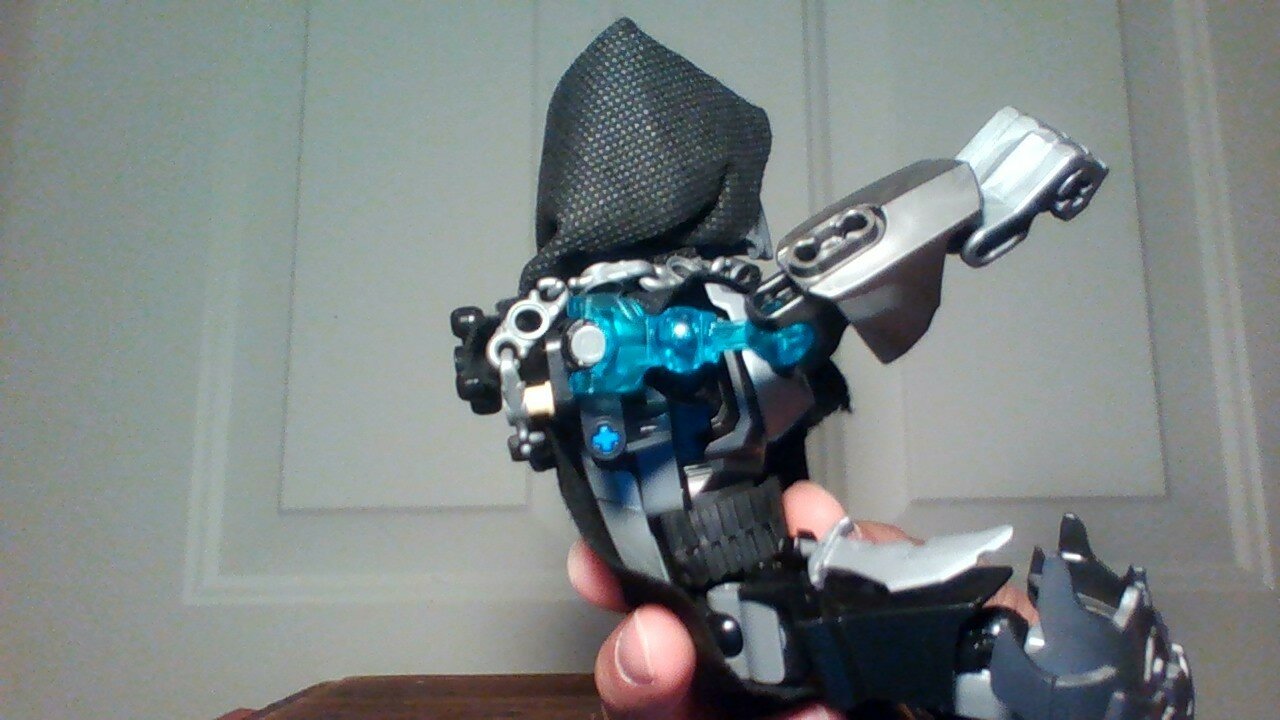 I personally think this looks better, it is supposed to represent a Blue Chroma being activated on the arms. You can see it more in the action poses for each weapon. Speaking of which, here they are in order that they appear from top to bottom in-game: 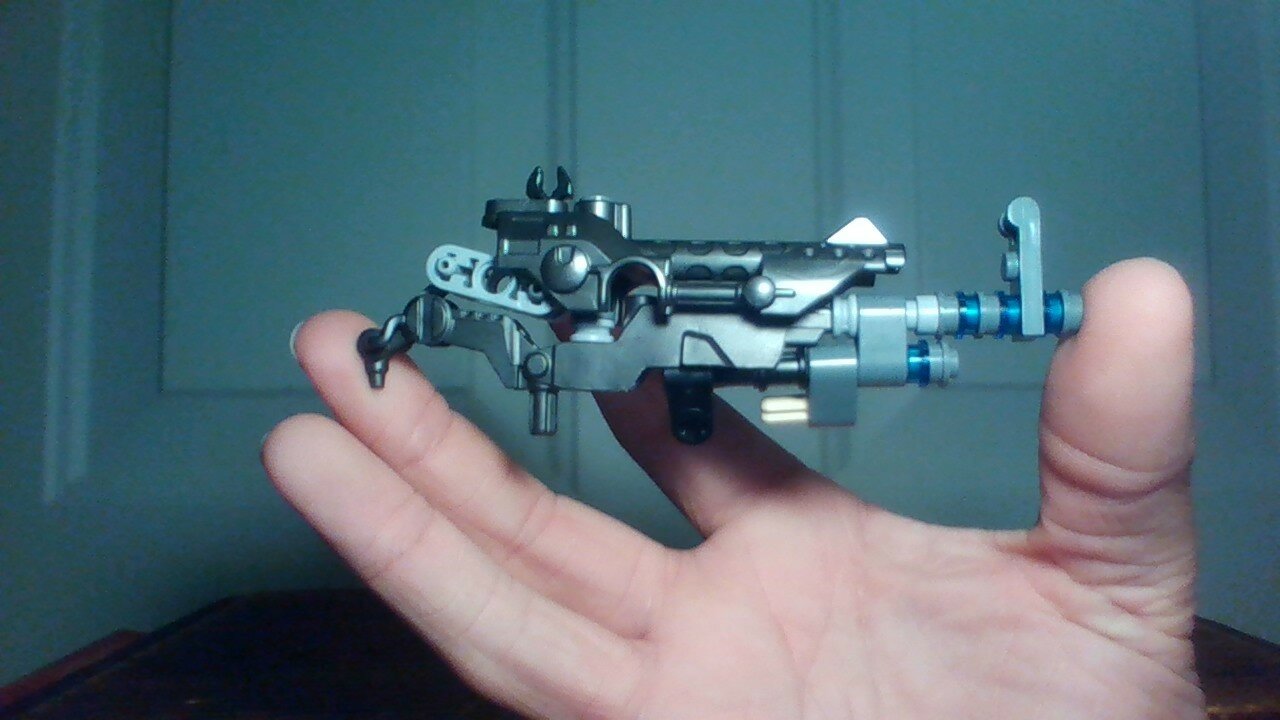 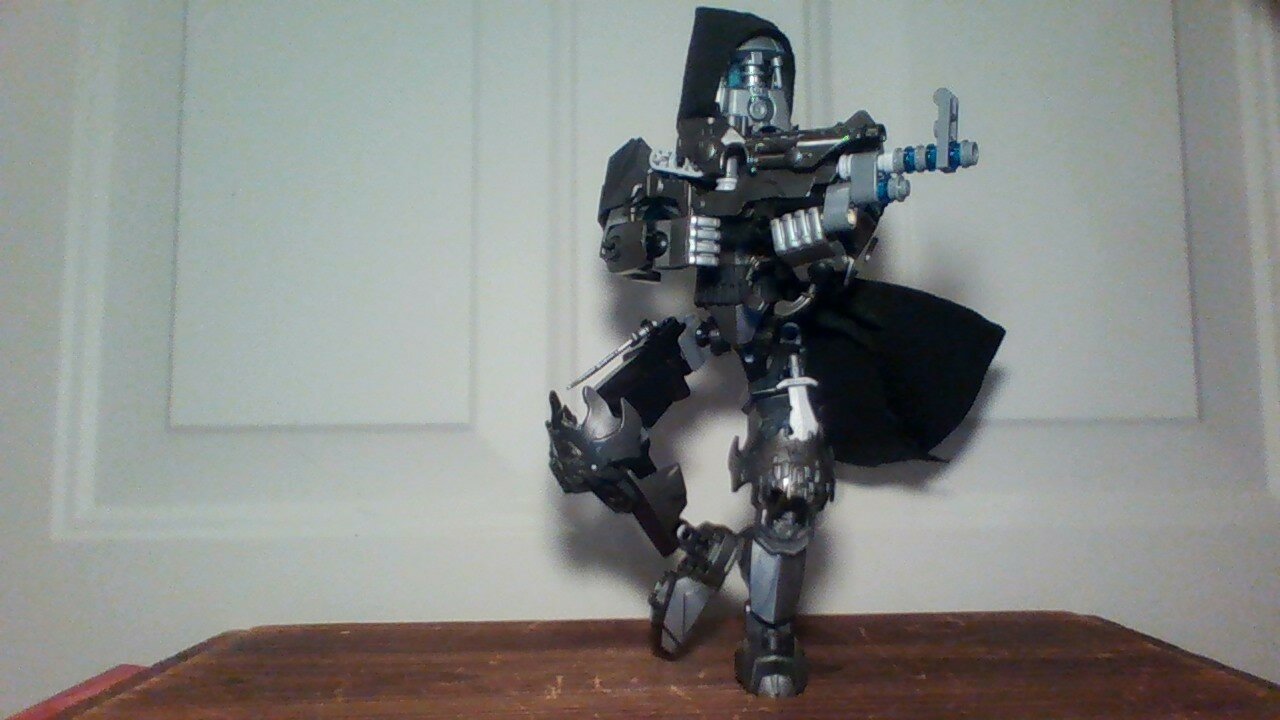 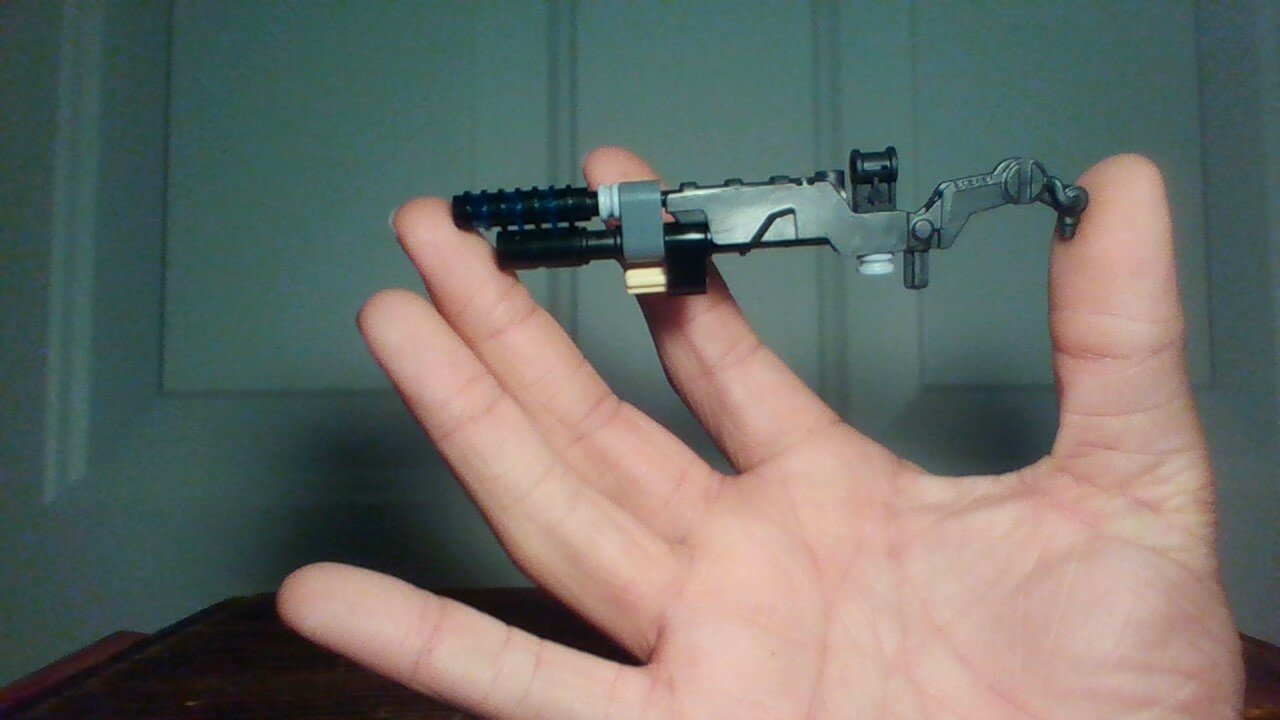 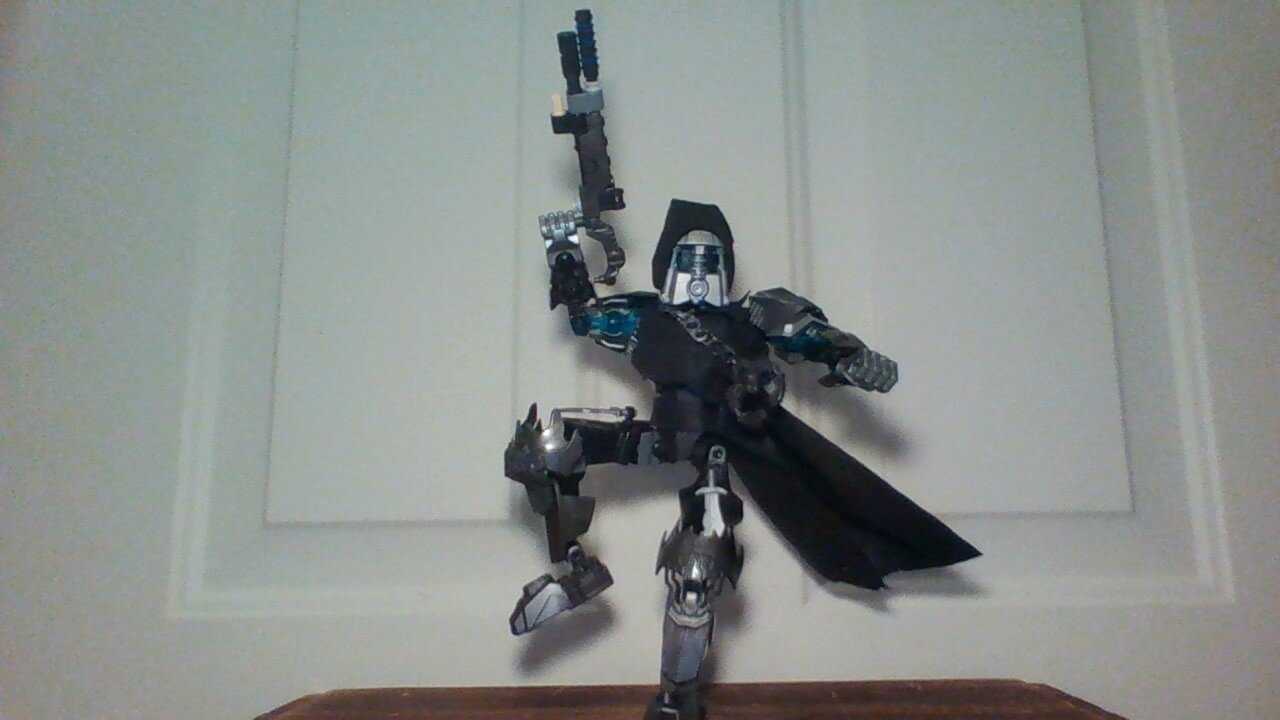 Sword (Heavy) The sword has not changed from the previous moc, but the photos are in a better light 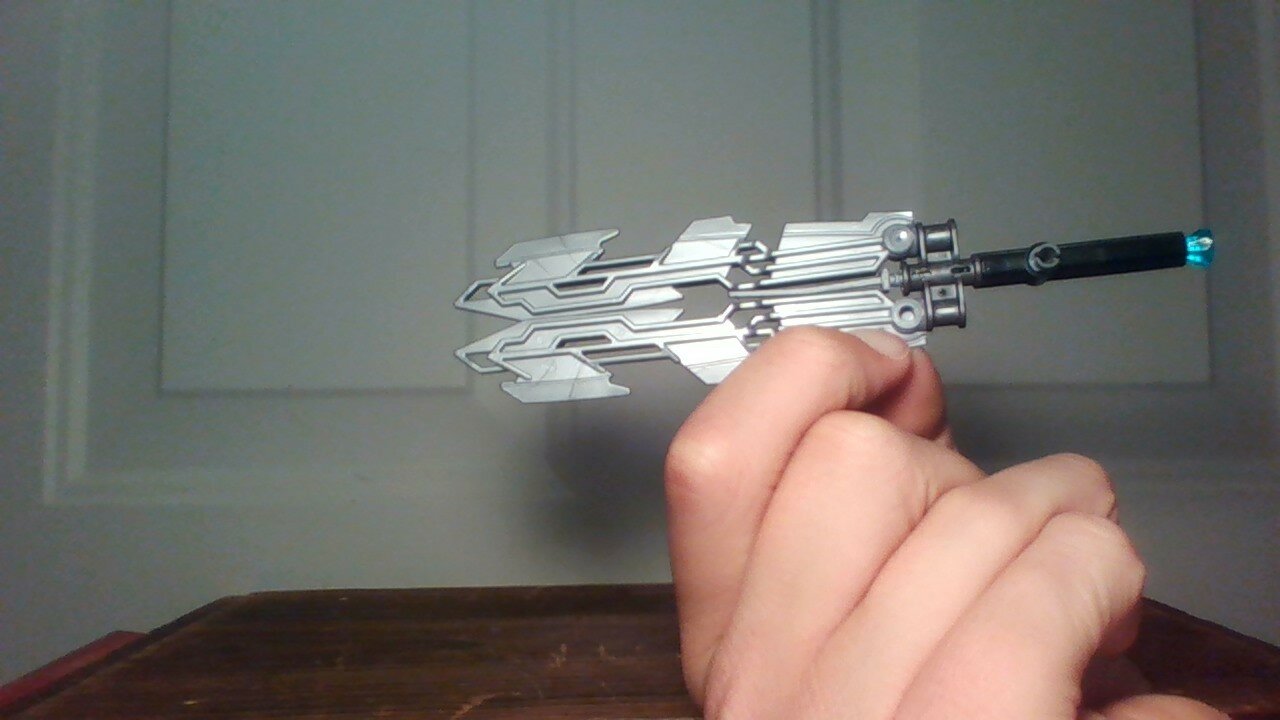 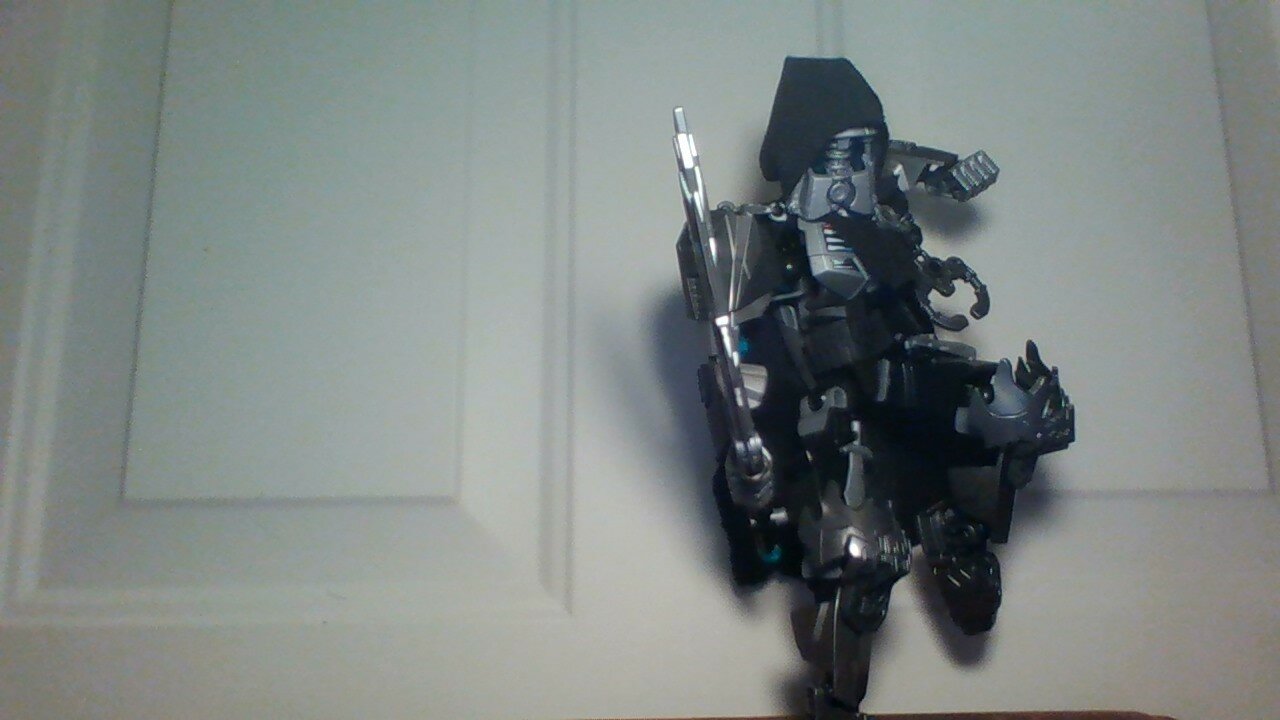 And finally (I know it is not a weapon in the menu, but I had to include them anyway), the Hunter’s Knife. Because he has two, it is assumed that he chose the Gambler’s Dagger Perk to give him a second Throwing Knife. 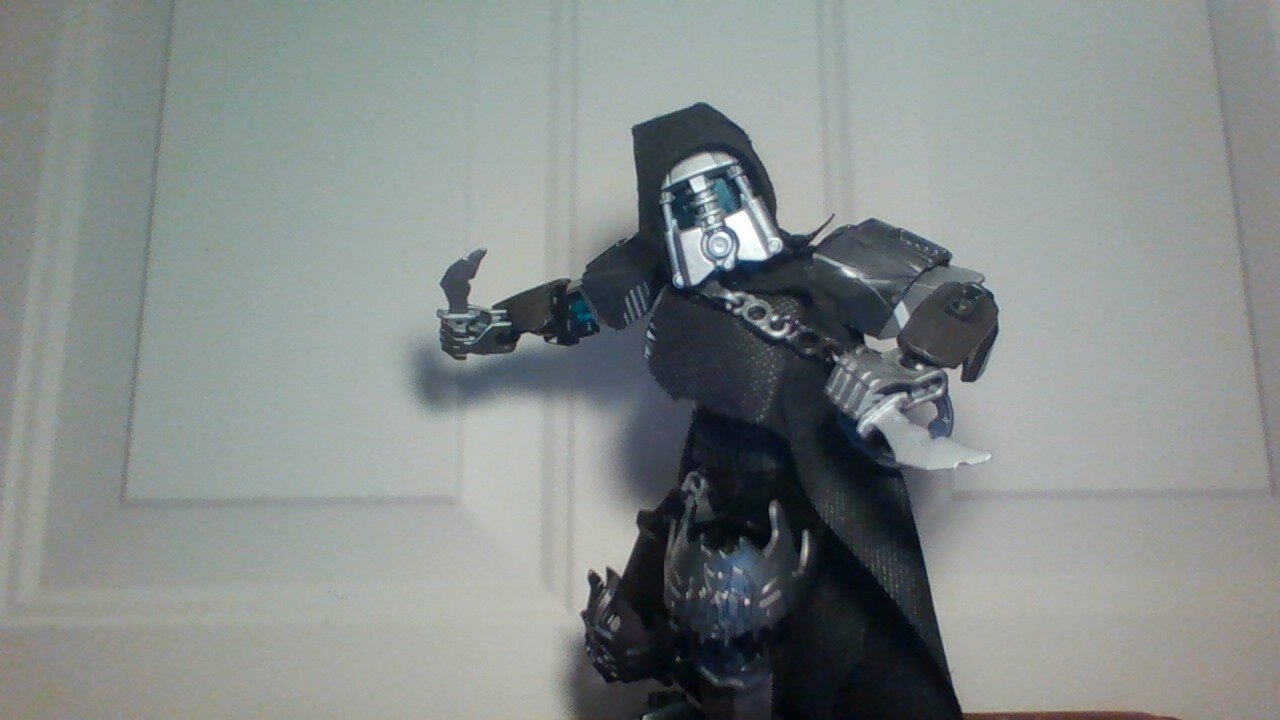 The action feature is still intact: 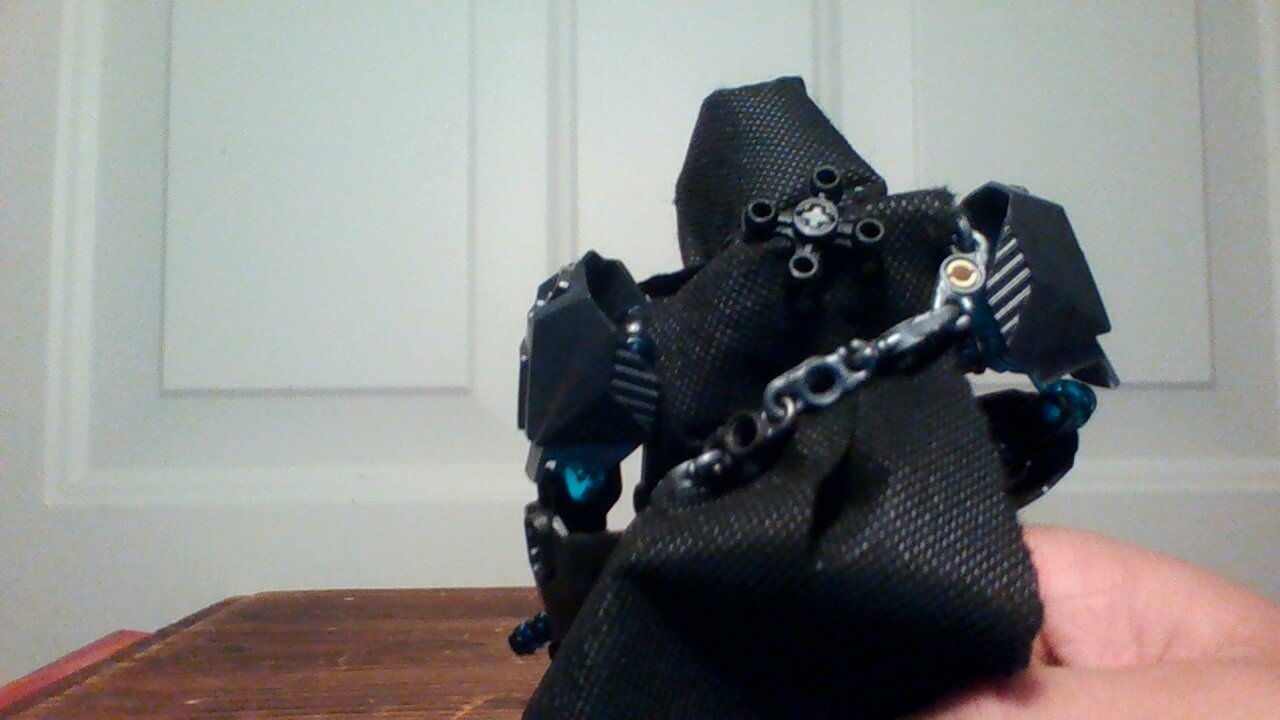 And here is the action feature:

Here is one final picture: 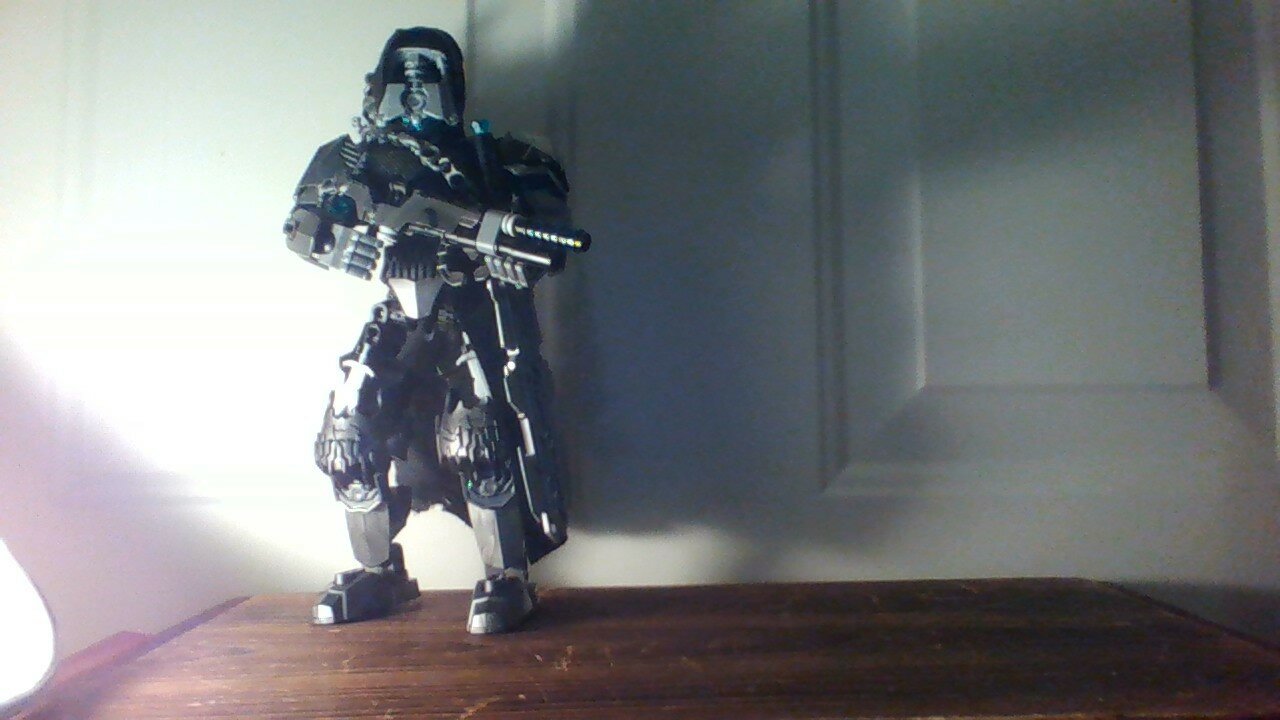 Please leave some feedback on how I could make this guy better.

I…I dont know how you could make him better with how good he is already…Maybe more blue? Anyway, this thing is really cool. I dont have any nitpicks about it…maybe because hunter was my favorite destiny class and he pulls it off so well? I dont know, but i like this

I love the head design, and the MOC is really good as a Destiny character.

The best face ever!!!

So, thank you very much @Ninjanicktf

The moc it’s self is actually very cool. I love the cloth cap and cowl, the gun, the swaord-it’s a pretty cool moc.

If I had the parts, it would look more like a Hunter wearing Spektar Aspriet Armor with the End Unsung cloak, then I would have to change the name to my gamer-tag and call it a self moc, instead of some name I found off the internet.

It would also be about 2 feet tall…

It would probably look terrible…

I have since disassembled this for the sake of rebuilding my G2 Spooky-Scurry Skeletmans and my protector figures (which I then modified, lawl). The tire that went over the chest-plate was surprisingly hard to remove…