Oh yeah that was great. There’s only so much a character can do before it gets to the point they’re just irredeemable. 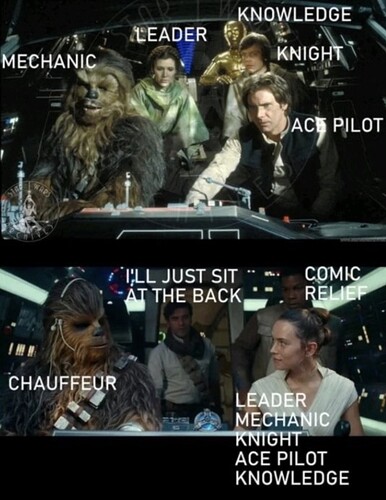 I’d’ve called g1 Chewie the “strongman”, IMO. He and Han worked together on the Falcon, and I don’t recall Chewie Mechanicing anything else.

A man of class.

Honestly true, I do remember there were a couple scenes in the OT, I think in ESB, where he was more of a mechanic kind of character. I think that also could’ve been more of an untold role as the copilot/Han’s partner, if that makes sense.

I’m WAY behind on watching Obi-Wan Kenobi, but I watched Episode 4 today. I know lots of people are trashing the show for “breaking continuity” with ANH, but I’m honestly liking the show. It’s kind of interesting seeing Obi-Wan going on a mission to rescue/protect Leia from the Empire, and seeing him have a rematch with his former Padawan. It’s also nice that we get to see some Inquisitors in live action…even if Reva is generating a lot of controversy. And the ending of the episode, where they revealed Reva putting a tracking device on Lola-that was a surprise. Now I’m looking forward to watching Episode 5 and 6 even more.

Episode 5 is great. My favorite episode.

i agree
also this is kinda random but

What an impossible choice.

my brother and i can never agree
i say solo

Rogue one may have been a pointless side story but unlike solo at least I remember it.

The only thing worth remembering from Solo is the nonsense ending twist.

How was it nonsense?

I barely even remember the twist. Something about the chick serving darth maul or something. That whole movie might as well not exist.

She was a member of the Shadow Collective, the criminal empire Maul built yes

Why does everyone hate Solo? (Please don’t answer. This is sort of a rhetorical question.) I found it to be quite enjoyable, only suffering from the entire annoying girlfriend plot. Aside from that, I liked seeing Star Wars from a perspective that isn’t just Rebels vs. Empire, with everyone knowing what has to happen for there to be a sequel. The fact that it was basically a heist/gangster movie actually made it more enjoyable for me because that’s not how most sci-fi movies (especially Star Wars ones) are set up.

Solo isn’t that bad, it just had the misfortune of coming out right after The Last Jedi. Some stuff in it might not be fully realized due to how many directors switched in and out of the project, but I still find it to be an enjoyable heist film.

I wish that season 3 of The Mandalorian would have Qi’ra in it, since she worked for Darth Maul, who was on Mandalore at the time. And because the luxury ship had a suit of Mandalorian armor in the crime boss’s cabin.

But The Mandalorian is set quite a long time after Solo. I guess Qi’ra could still be around, but…I mean, we know Babu Frik’s gonna show up, so why not Qi’ra?