They succeeded. The Network was established, everything was connected. Yet in the height of their power, they were betrayed. Every world, every realm, every side, every universe, every reality, every timeline were all merged into one. The System was whole again, as the builders of LEGO intended.

But is that what you wanted?

Come, tell me who you are now.

Ah, I see. Nice to know you again. Any questions or are you ready to go?

…Hey. So, hate to break any illusions, but I ran out of character space. I have moved all the information into this Word doc, which you should be able to navigate using the headers. The Table of Contents listed here is roughly the same as what’s in the doc, so just follow that around. It will be updated more later to correct errors and info that got lost in the move.

Any questions or are you ready to go?

Well, I do have one.

Mausoleum of Good Feelings: A collection of horrific Ghids

what is both wrong and right with you

Finally.
Time to get to business.

Role: Cowboy, gunslinger, lone wanderer, you get the drill.

Appearance: Tanned skin with plain features and black hair; wears a dusty jacket and hat, and a green bandana-like mask that can cover her lower face.

Tools and Abilities: Just a trusty revolver and a grappling hook.

Bio: Olivia can be a bit aloof and distant, but nevertheless is good-natured and friendly at heart. Despite her presentation as an old-fashioned gunslinger, Olivia hails from a more recent time period, though she refuses to specify which. Still, she travels the world like the cowpokes of old, finding work and solving problems as they come to her.

@Ghid I have been put through many tests to discover that answer. Unfortunately, it has not been discovered.

To my understanding, it’s a sandbox roleplay that combines all of the non-licensed Lego themes into one world. Most of the details are in the google doc linked at the bottom of the first post.

I have moved all the information into this Word doc , which you should be able to navigate using the headers.

interesting
maybe I’ll come up with something

I don’t have a complete minifigure yet, but when I do I’ll post them.

@Rukah Apologies for not replying to you! It was late, my tired eyes missed your post. But rainsong’s description is correct, it’s a mashup of all the non-licensed Lego products in one universe. The premise and some bare essential info is in the dropdowns as well for quicker reading.

@GoodGuy2006 Looking forward to it.

Appearance: Ib has cyan blue skin, black bobbed hair, and solid white eyes. She often dresses in blues of the same color as her skin, or darker. Her ninja uniform consists of a cyan blue top with a white diamond logo, darker blue tights, black gloves and boots, and a dark blue scarf/hood.

Tools/Abilities: Ib uses a single katana. Ib’s ability is to absorb, store, and redirect energy. She cannot create energy from her own being.

Bio: Project Eve was an attempt to replicate the Green Ninja’s Energy ability. Instead, it had the opposite effect and drained energy instead. A lowly ninja’s botched attempt to steal Project Eve’s secrets lead to her transformation into what is basically an energy vampire.

Reborn as Ib, the ninja worked mostly as a mercenary and thief. Doing whatever she was paid for to stay alive. Before the Merging, she kept a low profile, until someone paid her to do her duty as an anti-Green Ninja weapon. The Merging threw that plan out the window however, so it was back to mercenary work.

Ib was always a quiet person, some thinking her mute, but really she only talks to people she trusts. Though dedicated, she was never a competent ninja before her transformation. Afterward, her competence stabilized enough for her to perform her lessons well.

Ib’s a lot better at taking things apart than putting them together, always watching brick builders with amazement and a hint of envy.

Everything looks alright here, your character is approved.

Personality: She’s fairly clingy and tends to have social errors for a lot of races. Her very nature as a spider is something that most don’t like to begin with, and while she has made attempts to be more “friendly” she practically refuses to give up her original design.

Figurine (Build & Scale): A combination of Minifigure and Creationary. 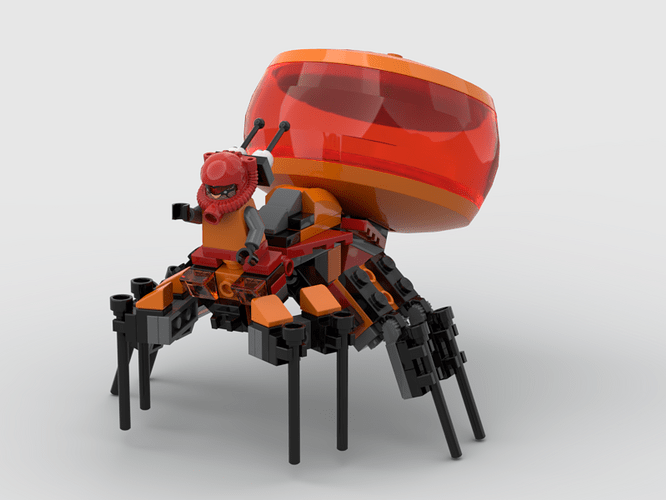 Alt-Modes: Unlike most X-podians she doesn’t particularly rebuild herself much, instead choosing to use her pod to store special parts and other things of interest. The last alt-mode she had was a scorpion-styled design, and chances are she’ll eventually reuse it.

Tools and Abilities:
Core Abilities: She possesses Speed and the ability to generate web bricks and string elements from her mandibles.
Tools: Most of her tools are assembled when they are needed. However, she typically carries power cells, and Minifigure tools in her pod along with a plethora of space-themed bricks among the more standard Creator fare.

Bio: Anachria’s spark emerged a bit later than most of the Creationaries. She emerged around a time when the UFOs were fighting the Black Empire. Right around this time period, a shot from a UFO buggy imploded a round of gas canisters and accidentally trigger a spark creation. Around this time a mechanical mess of parts was left to smolder and grow on an abandoned war-torn moon.

Eventually, X-podians came into fruition and she joined the group as an outskirt. There were no issues with her being accepted, even though she really didn’t fulfill the traditional role with more of a standalone nature at the time. Her role was mostly as a scavenger, of which she happily provided a plethora of parts and was quite acceptable for the job she did.

As time went on her fascination with Minifigures began, seeing as it was incredibly strange to be confined to a “body” as she thought. Using some bits from her creation, that she’d kept as a memento like most unique parts she crafted an upper body to attach to her body to communicate more clearly to them.

Said success was small, as she didn’t quite fit with a lot of the more city types, however she did have successful communication with the space types developing a trading system with some of them.

With clarifications offsite, character is approved.

Since it has become apparent, I need to give greater clarification on how the Figurine section of the profiles work. To do that, I will use the Trolls as an example.

You put your chosen race and then the build and scale. Unless the information would be redundant. For example, if your character is a Minifig, it would be redundant to do Minifig (Minifig & Minifig). And if scale or build makes the answer obvious enough, one of them can be left out, as shown in the examples above. As another example, here’s how a nonstandard Minifig might appear:

Figurine (Build & Scale): Minifig (Unchanging) ~= 4+/Jack Stone figure. It could be other things, so the scale on something like that could be helpful.

I have approved several characters that do not follow this properly, due to discussions elsewhere. Kirathel’s character is a Zotaxian and not a Minifig, their build and scale is Minifig. Keplers’s Rossetta Shale is a Hero, etc. The rest of their profile should make it obvious enough to not cause confusion (hopefully).

But hopefully that part of the system makes sense in how it operates from here on out.