Not really a headcanon, but the 2015-2016 was written in the Prophecy of Light. Unless Ekimu knew of another prophecy, literally anything can happen to Okoto at this point, we do not know of anything else in Okoto’s history written in stone.

How about first setting some proper rules regarding the legendary masks? Here is my proposal

Mask of Creation : allows the user to influence solid matter into powerfull masks, armurs and so on.

Mask of Control : allows the user to condense, manipulate or mutate any elemental energy that they come in contact with.

Mask of Ultimate power: allows the user to manipulate any elemental energy, and gives them complete control over his environment, whatever it may be.

Well I had some headcannons Which Have Been Explained In My Sixteen Realms Theory Topic.

Ok first you must watch these episodes of ninjago .Kingdom Come .Curse World Part II if you have watched them you will understand what I'm about to start a topic about OK we have these realms down so far. Ninjago/ Ultra Agents, The Curse Realm, Garmadon's Realm, The Underworld, Chima, Cloud Kingdom, Monster Realm, Candidates: Bionicle (g2 and possibly g1), Hero Factory, And Lego Knights Things definitely not on the list: .The Lego Movie .Friends .Elves .Lego Dimensions

Connections To Other Lego Themes

I don’t think that’s a crossover. But Still Interesting.

Since the corrupted/infected/poisoned Toa masks included with the beasts never appeared in Journey to One, I decided to come up with my own slightly far fetched head canon to explain them had they been incorporated into the story.

We saw Umarak the Destroyer coated in a glowing, sickly green, slime-like substance in JtO. In my head canon, this is actually Makuta’s very essence condensed into a slimy fluid, basically the G2 equivalent to Antidermis. It can corrupt masks like Kraata, explaining how the the toa’s masks may have been contaminated, and anyone who wears these masks is made into a complete, unquestioning slave of Makuta, although it can also make someone into a slave through direct physical contact, though this can only be done with large amounts of Makuta’s slime, and in large quantities it is often mutagenic, explaining how it transformed Umarak the Hunter into the Destroyer.

As for how the Mask of Control exposed Umarak to the slime, in my head canon, the MoCo was most likely in Makuta’s immediate vicinity when he donned the Mask of Ultimate Power, and in episode 12 of the online animations, “The Game”, Pohatu explains that there is a link between a mask user’s spirit or energy and their mask, possibly in the form of some sort of residual energy infused into the mask through prolonged use, and a former user can somehow use this energy as an outlet to transfer their own spirit energy into whoever is currently wearing their previously worn mask. Since the MoCo was still near Makuta when he had the Mask of Ultimate Power on, possibly in his hand or thrown to the ground at his feet, the shock wave emitted by the MoUP when it was knocked off Makuta’s face not only sent him to the Shadow Realm, but transformed his own spirit into a gaseous or smoke like form as well as his residual spirit in the MoCo, also possibly explaining how he was able to manifest himself in a shadowy, smoke like form whenever he appeared to Umarak to direct him as well as how he turned him into his Destroyer.

Wow, did not expect this to turn out as long or overly complex as it was, just trying to explain some things.

How Do I Link Files?

So, there’s the things I want to explain in one post. It’s my headcanon, so you can disagree. But I tried to create the most logical explanations as possible. So, let’s begin. Some of them reposted from the other threads.

#1. The Beginning: origins of G2, Vahi, everything 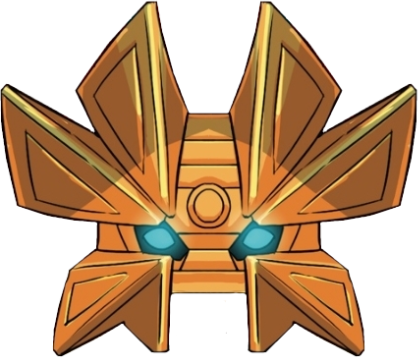 My theory is that during the Great Beings Civil War, the GBs decided to save the planet and prevent the catastrophe, because everything has gone too far and many innocent lives were lost. The GBs and Artakha created the second half of the mask(Vahi was something like a “Plan B” in case of unforeseen consequences, making it possible to fix everything, something like a panacea), and someone had used it. Unknown, if everything went according to plan or something really bad happened. Anyway, the Vahi reboots the universe(by creating a new G2 universe, like in the Back to the Future trilogy), and the second half of the mask remains in the G2 universe, alongside the G1 Toa Nuva(they’re getting new equipment). So, there are two possible scenarios: if everything went well, and if something went wrong.
1st scenario: the universe is rebooted, so the NEW GBs began to create everything we saw, including a water planet, Okoto, Elemental Stars, etc. Unknown, if the GBs have created the Toa or not, but it’s confirmed, that the Vahi and the Toa at least are the only things from the G1.
2nd scenario: a time anomaly happens, G2 is something like a “mix” of the universe, and all the things were taken from the original universe but in different times and forms. Water planet is the Aqua Magna before the Reformation, Toa are the Toa Nuva before the 2010 events, Okoto is the Mata Nui before its destruction, etc. This scenario doesn’t imply the GBs’ intervention, and everything occurs by itself. This scenario is more logical, I think. 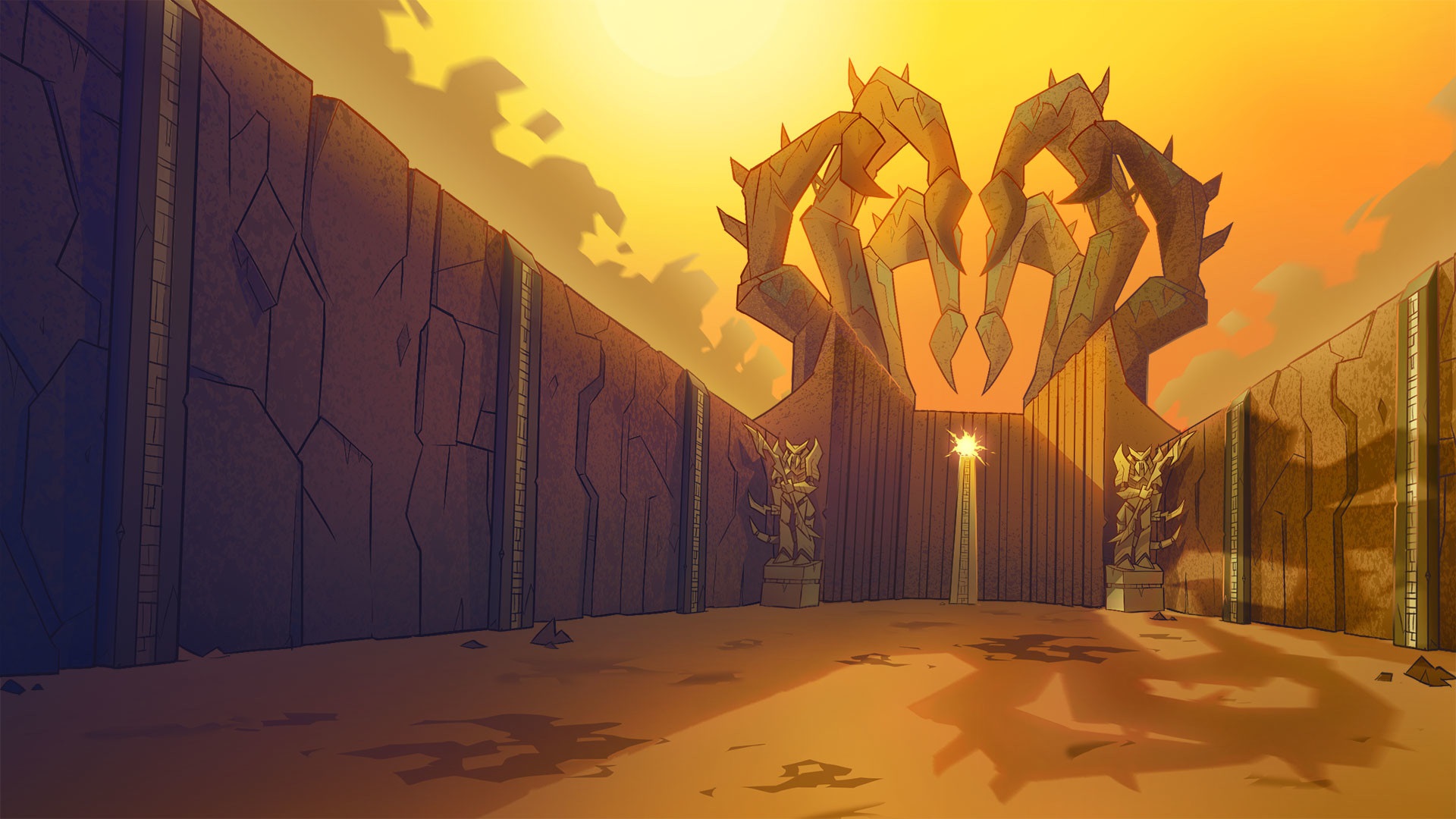 I think Scorpiokotans are the ancient race native to Okoto. I’ll say more: I think the Skull Slicer is one of them! That race was a peaceful nation lived in the Region of Stone alongside the Islanders. Some of them fought on the Arena in the Mask Makers’ city, and the Slicer did. Maybe they even worshiped Ketar. Anyway, they extinct/hid underground after Makuta’s Betrayal. 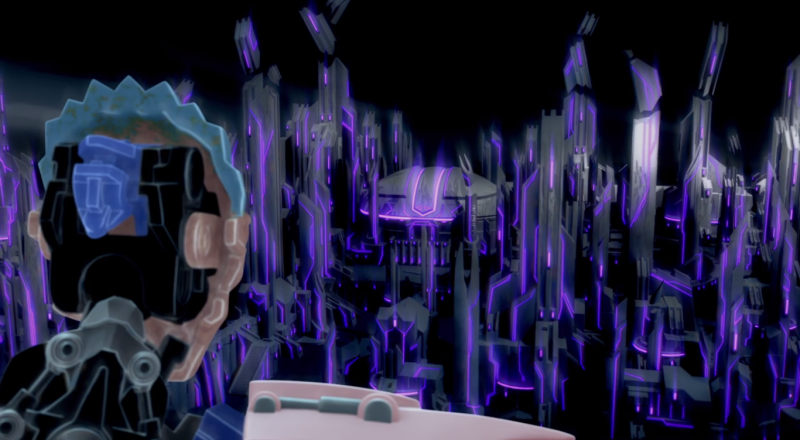 I think it’s the Umarak’s personal pocket dimension, like Zivon’s Zone of Darkness. I think you got the idea. Umarak was sitting there for thousand years, but after Makuta’s Betrayal, the whole city has been teleported to his dimension. Makuta met Umarak and hired him for the big quest. The Skull Creatures seen in TJO are actually dead bodies of the Skull Raiders, buried under the city a long time ago. After the teleportation of the whole city, Makuta used his dark powers to revive them. So, that’s why there are Skull Warriors and Spiders in the SR.

#4. Golden Mask of the Skull Spiders 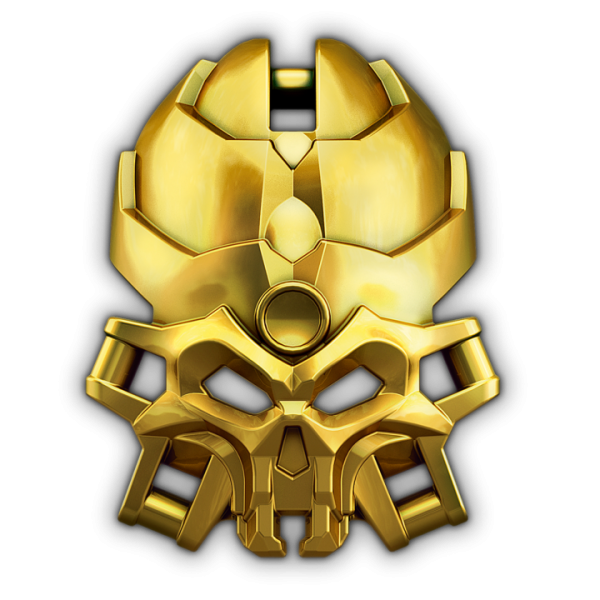 That mask did not appeared in the storyline, however it is canon. I guess Makuta had created the mask sometime during his relationship with Kulta. It may be something like a “present” to make amends and get a leg in with the Skull Raiders. Also he could create it during his residence in the Shadow Realm, but then he should transfer it to Umarak, and Umarak should transfer it to LoSS(if it possible to take objects from the SR to the real world).
Also it can be something like an artifact, that Skull Raiders brought with them during the journey to Okoto. I like this theory much more. 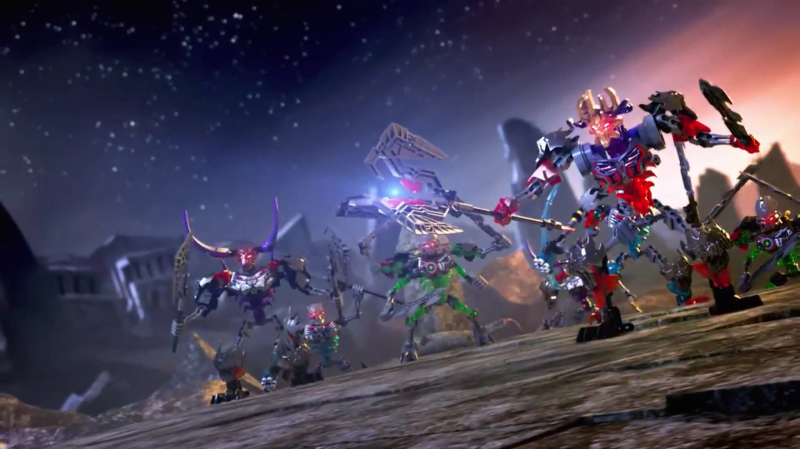 ALL of the Skull Creatures have came from the an unknown island(maybe the land to the right from Okoto. I’ll call it a “Skull Island”) with the Skull Raiders, even LoSS, Skull Spiders and Scorpions(the creature from the polybag). Maybe the Skull Raiders used the Scorpions as a torture, or these animals lived in the ship hold, and then got out on island and bred.

Criticise and write, if you agree, please.

Already have a whole topic for the Vahi:

Origins of the G2 Vahi BIONICLE

Here's a crazy idea: maybe the G2 Vahi has NO connection to the G1 Vahi. The G2 Vahi has a lower half that happens to be shaped like the G1 Vahi. This universe has a Tahu, Toa, Makuta, etc. that have no connection to G1. It can have a Vahi that has no connection to G1 too. The G2 Mask was made by some random powerful bloke. It got split in two halves at some point, and half of it wound up on Okoto at some point. It probably isn't even older that Okoto; that's likely just Okotoan mythology, like the "Makuta and Mata Nui were brothers" thing in G1. ~W12~

Umarak was a Dark Hunter created by the Shadowed One to specifically kill the elemental beings when they first appeared. Then melding universe teridax went evil, killing the Shadowed one, and enslaving/transforming most of the Toa/agori/matoran/glatorian into the protectors, except for Mata Nui. Artakha sacrificed himself to give Mata Nui a new mask and identity as Ekimu, and sent the Toa Nuva to their respective stars. Umarak wanted revenge on Makuta and found his chance when Makuta contracted him to get the Mask of Control. Umarak thought he could end alternate Teridax by using the mask, but ended up being turned into Makuta’s slave instead.

Also, it channels and amplifies emotions.

My headcanon is that G2 got a good ending.

Agreed, but we all want a little backstory!

Umarak is the primordial manifestation of shadows, just as the Creatures represent their elements.

I disregard LEGO canon and substitute it with my own.

I suppose I may as well note how I think the masks of creation and control work. The former is similar to its G1 counterpart; it’s like an infinite wiki on how to make anything you know you want to make.

The mask of Control is capable of manipulating the environment- with the stipulation that you already have to be in contact with/aware of the physical location of what you want to manipulate.

For instance, say Ekimu and Makuta want to build a bridge. Ekimu thinks “Siri, How do I build a sturdy stone bridge across this gorge?” and the mask projects the blueprints into his mind. Ekimu takes those blueprints, writes them down, and hands them to Makuta. Makuta can then look at them, and assuming the nearest rockface has enough rock in it, move the stone out of the cliff and into the shape of the bridge.