Here are some early (I repeat EARLY) conceptual designs for what Bohrok could look like in G3. Yes, I know they aren’t bug-like OR biomechanical. But it always seemed weird to me how the Bahrag were dinosaurs and the Bohrok were insectoid, and drawing them biomechanically had slipped my mind at the time. So I made a happy medium between the two. I’d imagine these Bohrok and Bahrag (both the Female Queen and Male Rogue Lord) to be more rahi-like, living in the wastelands, jungles, and caves of the Island. There’s really no plot purpose for these, unless someone can think of a good reason. Tell me what you think! 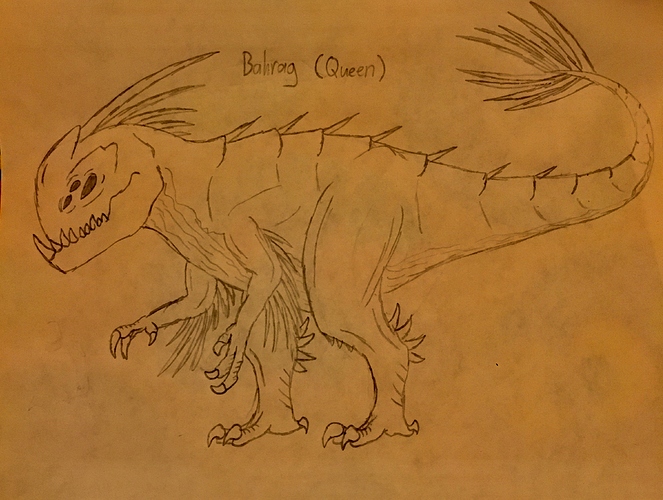 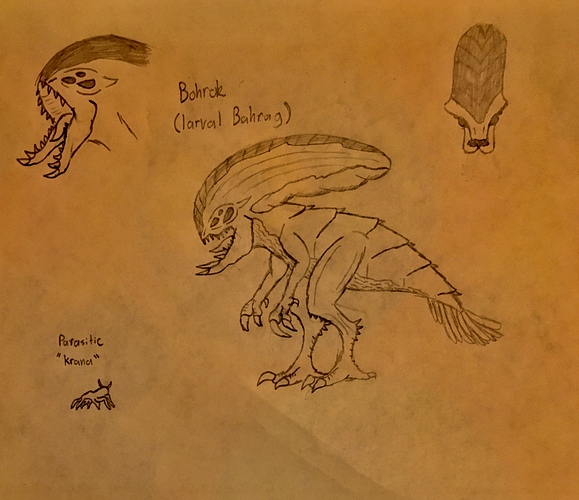 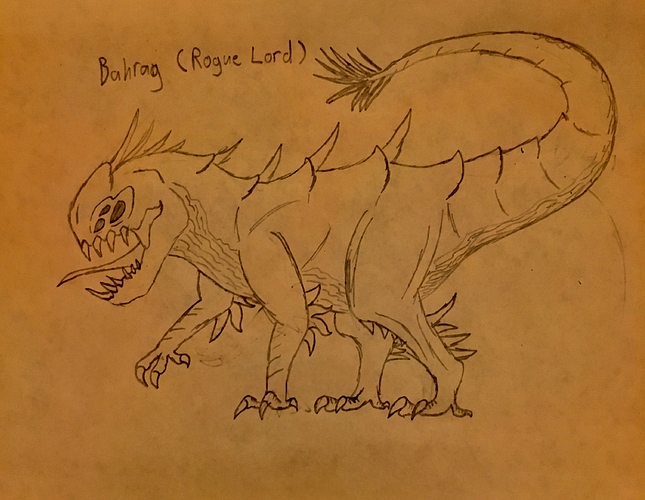 IMG_4355.JPG3021×2339 1010 KB
So for some story context, I imagine the Bohrok as a hyper-intelligent hive mind rahi species. They live in the deepest forests, darkest caves, and other places Matoran of any tribe would consider uninhabitable. In terms of a life cycle, a Queen Bahrag will lay eggs of genderless bohrok. The Bohrok are born with a secondary organism (Krana) living inside a pouch on the back of their head (the Xenomorph looking theme). This organism helps the Bohrok to survive in its early life stages, as when released, it latches on to the face of a Matoran, slowly draining its nutrients and energy, and giving it back to the Bohrok upon return. The Krana will eventually die as the Bohrok matures.
As the Bohrok grows and matures, it will gain the characteristics of a certain gender depending on the environment it lives in. This change happens during a caterpillar-like metamorphosis. If the current Queen is old, weak, or dead, there is a higher chance of the Bohrok growing into a female Bahrag. If there is a strong dominant Queen, as well as many other growing females, the Bohrok has a high chance of becoming a male Rogue Lord. Females are far more common in the Bohrok hierarchy, as Queens are needed to lay eggs and can reproduce asexually. However, the males are not useless, as Rogue Lords tend to start small individual packs with other Bohrok who lose their way from the Queen’s hive. These Rogue Packs help to keep the Queen’s hives balanced, as if she were not regulated, the Bohrok would likely overpopulated and cause serious issues on Arthaka. In the event of a duel between a Lord and a Queen, it is likely for the Lord to take the win, as he is more agile and swift. If he were to defeat a Queen, The Lord would seize control of the hive until another female Bohrok matures into an eligible Queen Bahrag. Then, the Lord would be forced out by the Queen and her new Bohrok followers.

Now, with their lifestyle out of the way, here are some possible ways they could fit into the Brickonicle story:

-a possible threat in Onua’s origin episode- possibly even the cause of his families death?

So there’s my pitch. Feel free to ask any questions. Hope you enjoyed!

Hhhhhhoooooooooooolllllly crap! This is truly too amazing for words. I feel like one thing G3 really needs is bohrok, and this is just fantastic. I especially love the queen design.

These are just basic concepts. I’m sure I can spruce them up to make them more bio-mechanical

I think they look good organic

I get a Alien vibe on this take of the Bahrag and the Bohrok.

They look a lot better organic

Mind if I do a Concept of these?

Of course! If you could please give me credit for any specific designs that would be great.

They mentioned it in the latest Podcast so (Brainstorm ep 10) So I am gonna evolve on this.

You know, something just occurred to me. As amazing as these are, what would they look like in set form?

Let me finish Oomatu’s Rahi and I might have something rough for you.
CCBS or System?

I’m mainly thinking system since that’s what G3 is all about.

I think that I need to find that rendering program Sokoda uses. EDIT: And thanks to @ReeseEH , I have. That looks sexy. 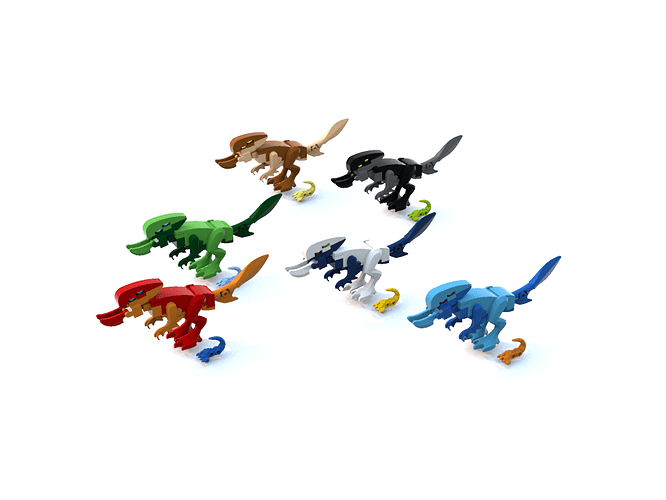 Colour schemes came from the Toa. I used shaped legs, but I went with a custom torso to get the curves and proportions that I wanted. Went with the old dragon arms because I’m very fond of them and I thought that they lended quite a nice shape to the Bohrok. The head was an issue - maybe something like the Hero Factory cocoons might suit them better - but I found some potential krana molds, though would Brickonicle if it were a set line use a new mold?

though would Brickonicle if it were a set line use a new mold?

Anyway, these look amazing.The under-bite is a little eh, but other than that this is fantastic work. I can’t wait to see how the Bahrag turn out.

Bahrag will probably use more shaped pieces since their designs are a bit more forgiving.

What if you use the T-rex leg parts for the Bahrag, since you used the raptor legs for the Bohrok?

That’s the current train of thought, yeah. I might see if I can work antennae in there to assist in differentiation as well.