The Brotherhood of Makuta - Makuta Doraxus (and Matoran Hanu)

Hello guys! After so much time I finally finished my moc for @Gilahu’s BoM moc project (I am sure the guy had a hard time waiting for me, and for that I am sorry). I tried my very best to make it as good as possible, with my limited set and pieces collection. I also could not respect the mostly-old-Bionicle-pieces rule, due to the fact that this type of pieces represents a very very very small minority in my Lego collection.
But without further ado, here it is: Makuta Doraxus 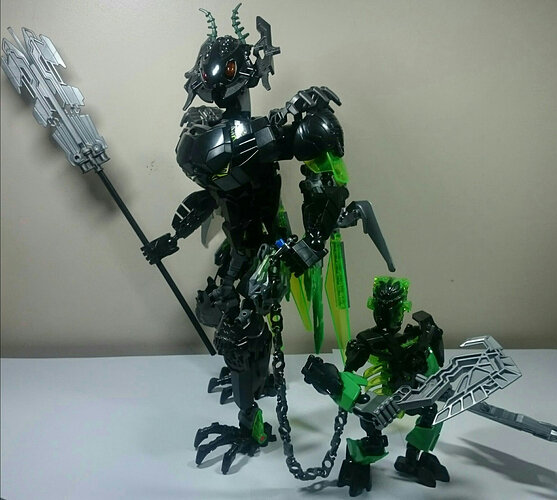 ##Stats
Name: Doraxus
Title: The head of mischiefs
Main occupation: Rahi creation
Assigned region: Mokumo
Kanohi: Tuhinga Nui, Great Mask of Scavenging
Weapons: Spear through which he concentrates most of his attacks, Hanu
Status (like any other Makuta): Deceased

##Backstory
Early life
Doraxus started his life regularly, just like any other Makuta. His life was event-less, nothing of great importance happening in it. He had strong opinions when it came of leadership and politics, being sceptical towards the whole ‘duty of a Makuta’ thing. He was also a pretty reserved Makuta, not having too many friends. He was preferring to stay alone in his lab, rather than being part of a team. However, he was often finding himself having similar schedules with Makuta Antroz. In such situations, the two were staying together, often debating about politics, Rahi creation, and other regular small-talk subjects.
Doraxus was a big trickster, having a real golden mouth. He was always able to trick the other Makutas into obeying him, tricking them into doing things that would help him the most, and the others the least. This is way the all of the Makutas that were not part of his friend circle were taking everything he was saying with a grain of salt.
The Convocation
At the beginning of the tension between Teridax and Miserix, Doraxus preferred to remain neutral. He knew that if any of the sides will try to recruit him, he will be able to talk his way out of troubles. However, later on Doraxus decided to join the conflict on Teridax’s side. He let everybody know that he did this only because he was believing in him, but the true reason is that Antroz convinced him, in one of their political debates.
The Creation of Hanu
Shortly after the Convocation, Doraxus started his scientific projects, in hope of creating new Rahis. He was doing this mostly alone. He had, however, one henchman native to the island of Metru Nui, a Le-Matoran called Hanu. One day Hanu accidentally fell into a poll of a toxic substance made by Doraxus. When Doraxus took him out of it, he was terrified to see his little henchman turned into a Matoran-sized hurricane, a monster who’s only wish was to attack and kill. Doraxus quickly subjugated him and turned him into his animal. Doraxus would often take him where he is going, with a long chain wrapped around his neck, using Hanu to intimidate the other Makutas. Hanu is like Doraxus’ dog. A very wild and bloodthirsty dog. With two axes.
Hanu can also merge with Doraxus, just like the Kra-Matorans could merge with the Makutas of Karda Nui. When combined Doraxus has the ability to negate any form of stasis field, making him pretty hard to catch.
After the Convocation
Doraxus was the ruler of the island of Mokumo, populated by a large range of Matorans. Doraxus however disliked the fact that he has only one island, and so his ego found an excuse to act bossy around the leaders of the islands south of Mokumo, like Makuta Radayi and Makuta Kidrov, one more reason for which Doraxus was heavily disliked, or even hated.
Doraxus was one of the Makutas with the most creations, easily fitting on the top 20 list. Some of his most well known creations are the Artahka Bull, the Dermis Turtle, the Fader Bull, the Gate Guardian, the Hapaka and the Ice Bat. There are also very few known cases in which Doraxus to fail into creating a new Rahi. That’s because every time he would fail (which was actually happening quite often) he would use his Great Mask of Scavenging to absorb what little power the dead Rahi had (“just in case”), before throwing the dead body in one of the polls of boiling oil from Mokumo.
Death
After the rebellion of Teridax’s Toa Hagah, and subsequently the Brotherhood as an organization loosing all pretence of still being a benevolent organization, Doraxus was sent to cement the Brotherhood’s political supremacy throughout the universe. Of course other Makuta had worked on this already for many millennia, but Teridax had to be sure that nothing could threaten the plan at its critical stage.
Thus Doraxus travelled the universe, writing reports about what he discovered, and - if necessary - subtly influenced local politics with his mischieving talent. At one point his influence was discovered, however, and a local ruler of Mokumo hired assassins to kill Doraxus. Doraxus survived the attack, and, according to his orders, prepared to overthrow the local government and replace it with one that would be more amiable towards the Brotherhood, one with himself at his centre. The fact that his own Matorans were rebelling against him was enough. He was going to rule over Mokumo with an iron fist, and then convince Teridax to give him the islands of the other dead Makutas. He sent for the Visorak Horde, but, impatient, also recruited mercenaries to strike as soon as possible. Unbeknownst to him, however, the mercenaries had been bribed by the ruler who had also sent the assassins. Doraxus died when the mercenaries in his own ranks turned upon him. When Sidorak arrived with the Horde, this sealed Mokumo’s fate, though.
Hanu survived, running in the wilderness with the Artahka Bulls. He eventually found a way out of the Matoran Universe, on the newly reformed Spherus Magna. Shortly after this he subjugated a small group of wild Rahis, ruling over them like an alpha dog. Till this day he is having Doraxus’ Kanohi, as a memory of his fallen master.

Hope you liked the backstory! Now onto the pictures.
##Pics
Doraxus 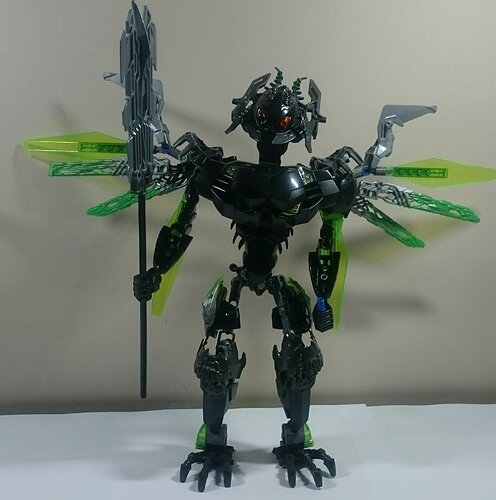 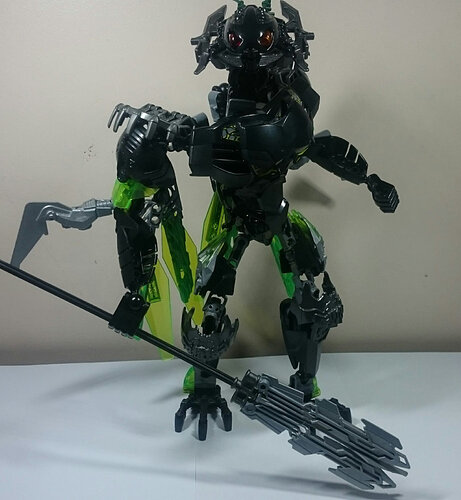 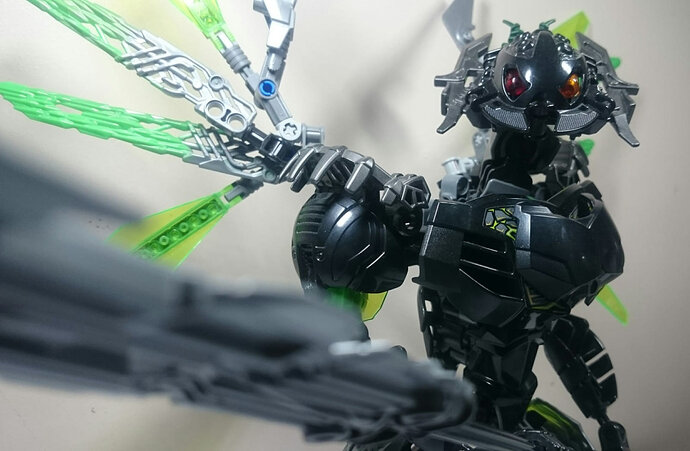 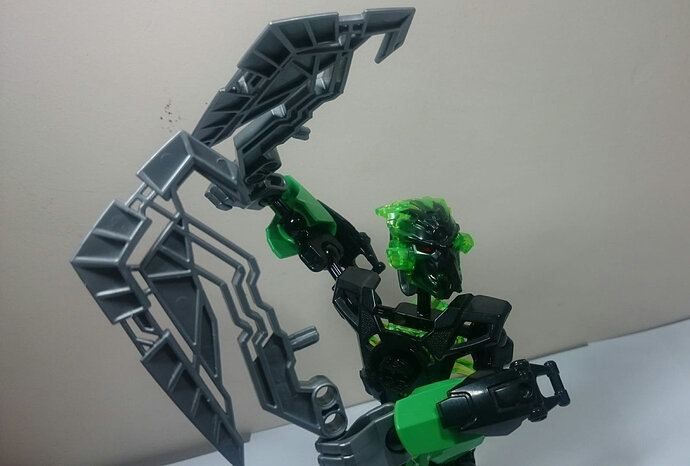 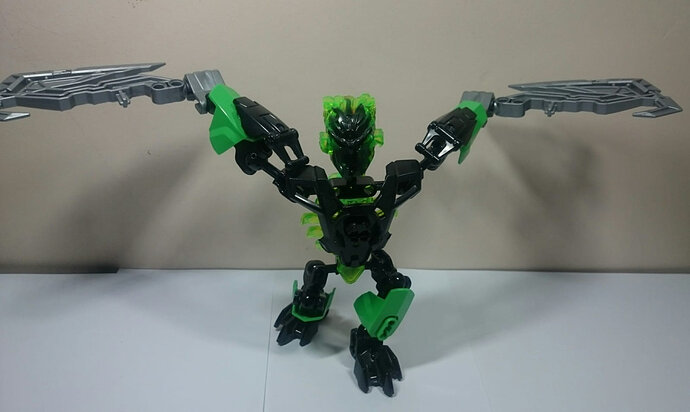 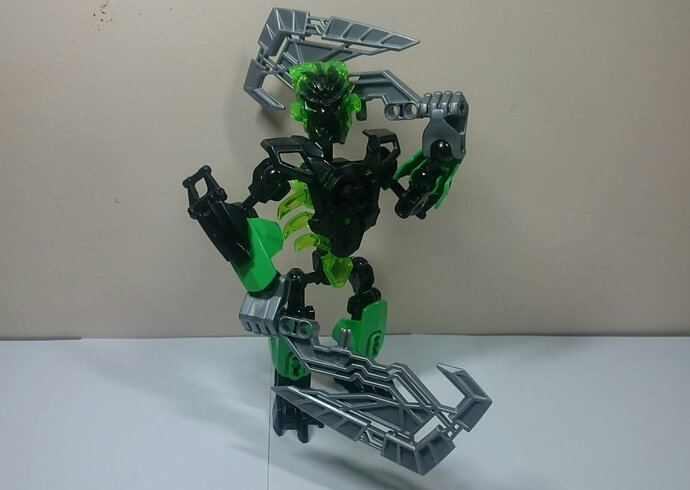 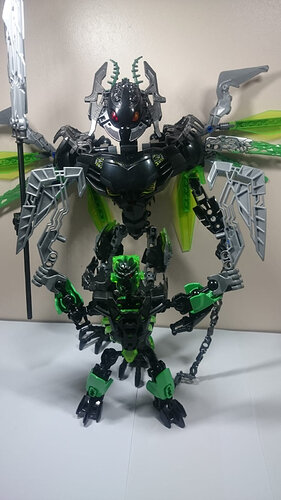 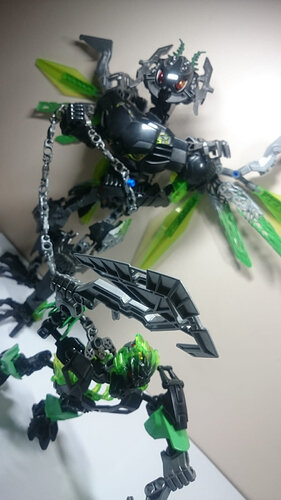 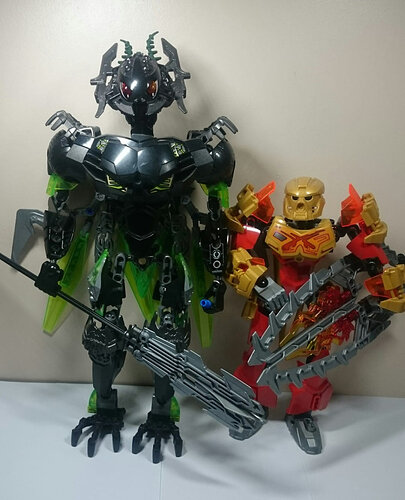 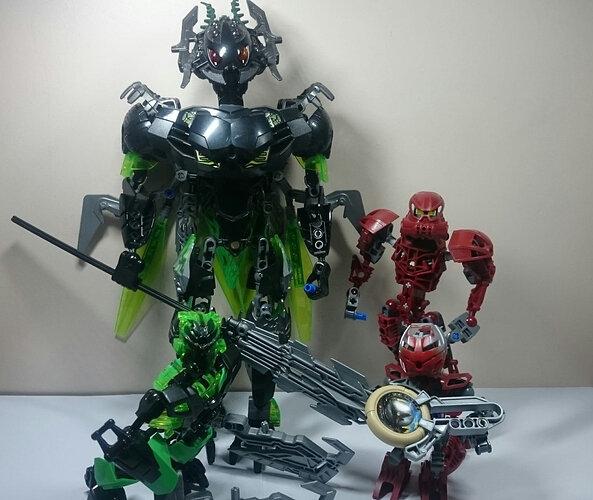 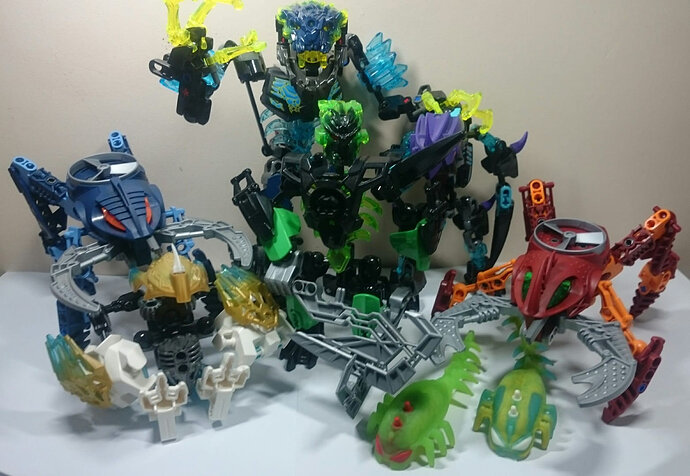 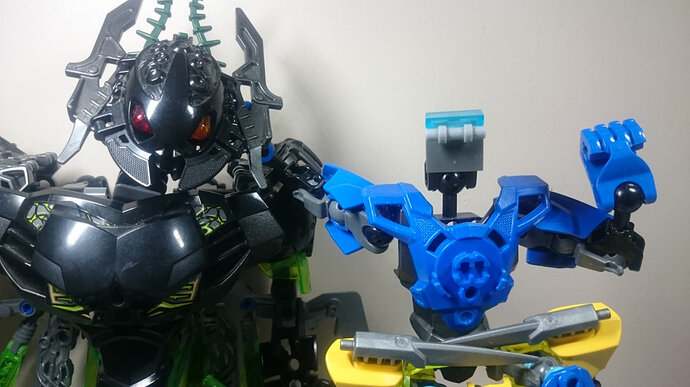 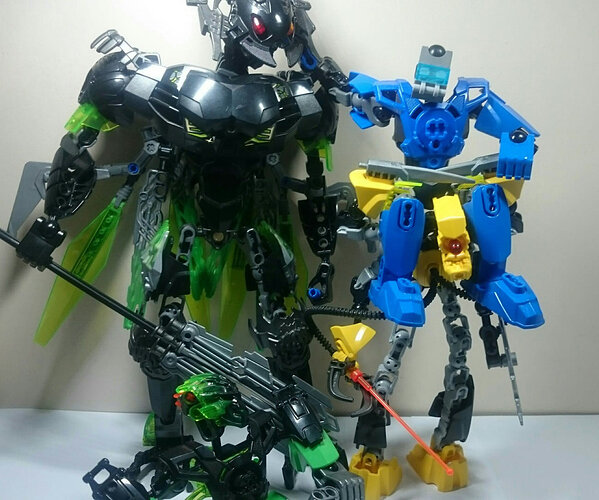 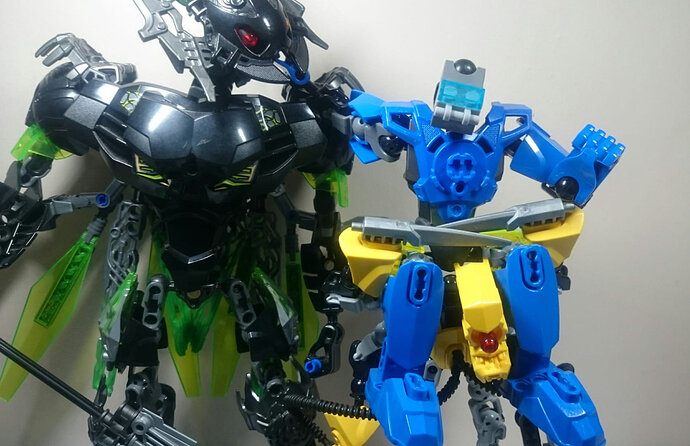 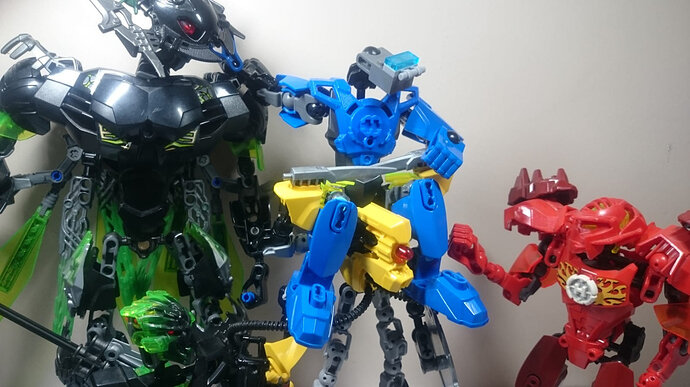 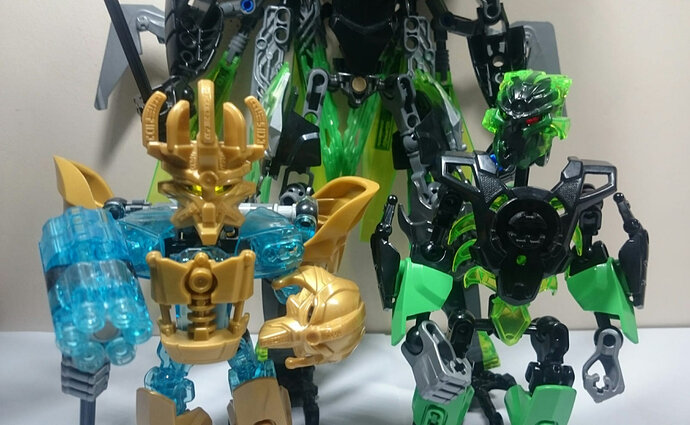 image.jpg1600×987 287 KB
Here are Doraxus and Hanu next to Ekimu and two of the most powerful masks there is. 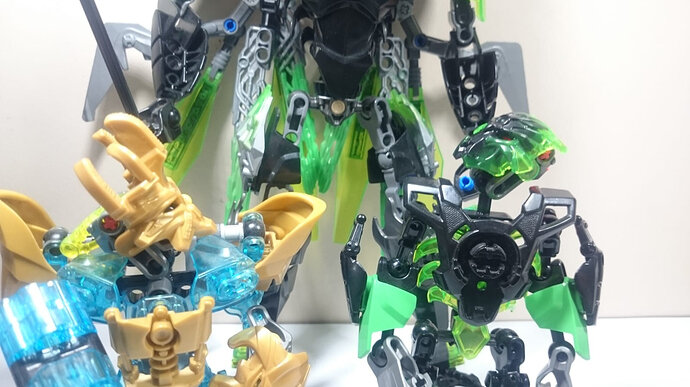 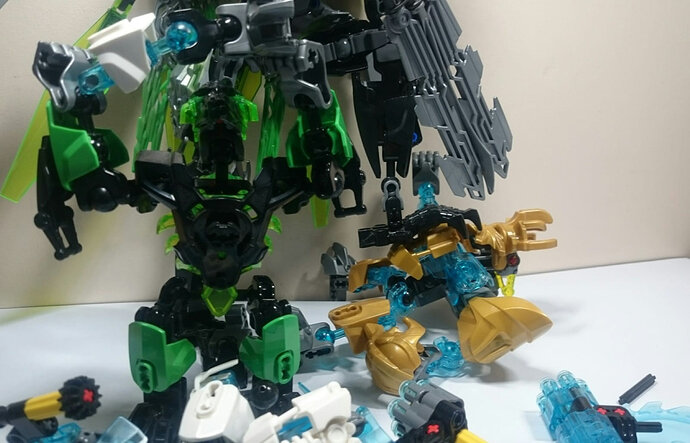 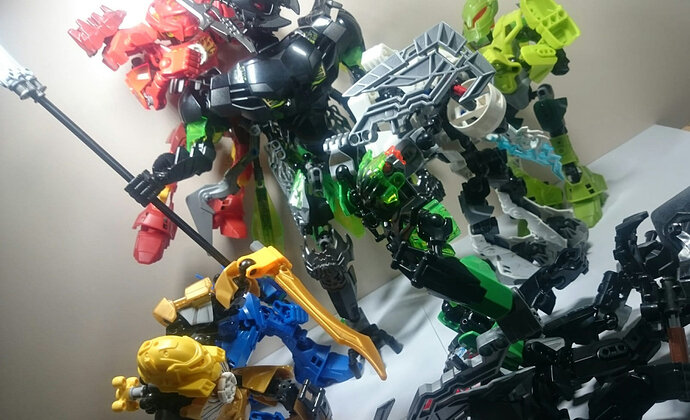 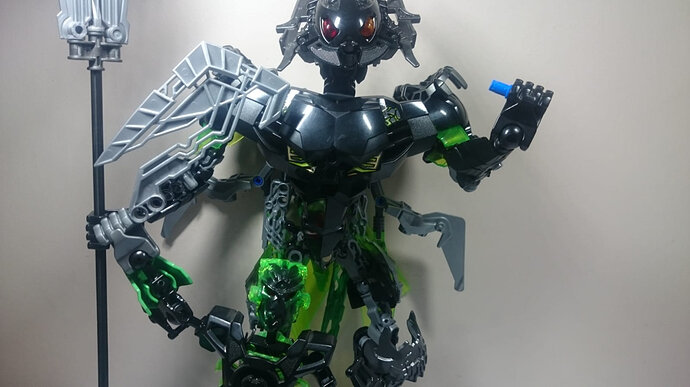 Hope you enjoyed them! I really put a lot of time into these two. Please share your thoughts and criticism down bellow.
Have a nice day/night/afternoon.
Vladin out.

21 Likes
Mutant Toa Hangara: Four years of evolution and tweaking
The Brotherhood of Makuta - What About a Community MOC Project?
Sushiyoda June 9, 2019, 3:10am #2

The proportions seem to be a little wonky. The head is huge and the arms are super skinny.

I kinda feel you took the whole torso from Umarak the Destroyer and just modified it a bit, but I guess this is a pretty decent MOC overall.

I still wonder why you mentioned my Makuta in the backstory

Because of the island you chose.

Nothing too special, but looking good. The head is actually pretty neat, though.

If you had the parts, less wide shoulders and custom arms and legs would have been nice, too, but I guess that’s my job to do once I revamp Doraxus ;).

We talked about it. It’s fine.

If I remember correctly RSG’s name for the Mask of Scavenging is Aiykha.

I know this was the main problem in getting this topic up, but… could you take another picture like the second one, only with better lighting, the entire MOC on it (the top of the head and the satff are cut off) and the staff preferably in a vertical position?

Thank you for allowing me into this project! When it comes of the mask name, I remember searching for it, but without any result.
And yes, I’ll try to take another photo.

The head is my favourite part. It gives it a surprisingly Makuta-like feel!

It has a huge breastplate and a skinny torso, I would also add more green to the torso
Other than that, not bad

It’s not that skinny, at least not to the point it becomes unappealing for the eye. It has the same proportions as Umarak the Destroyer.

Yeah, that will do nicely, thanks!