The Brotherhood of Makuta - Mutran 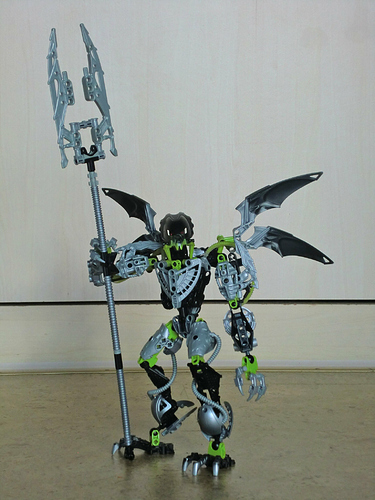 Makuta Mutran, master of mutations, creator of Rahi. His knowledge was the basis for the Plan. His death the indicator for Teridax’ betrayal.

Mutran spent most of his time creating Rahi - or mutating them. Nonetheless he would carry out missions from time to time. He was involved in the defeat of the league of six kingdoms, forgot his little living rock, that would later become the mountain, on a diplomatic visit to Xia and was later sent to meet the mythical Tren Krom.
It was after this ancient being had entered his mind, that Mutran knew the truth about Mata Nui and how the Great Spirit could be overthrown. On this fundament Teridax announced his plan, Mutran and the majority of the other Makuta backing him up.

Sent to Karda Nui to keep a steady supply of Shadow Leeches, Mutran eventually joined the fight against the Toa Nuva and helped getting rid of Icarax when he betrayed the Plan. Mutran was the first one to be destroyed by the energy storm that claimed Karda Nui, when the Great spirit was awakening. It was curiosity, driving him to his death. He never realised, that Teridax meant to leave no loose ends.

Mutran wore a near indestructible suit of protosteel armor that contained his essence. Like most Makuta he used a variety of weapons. One of them was the staff of conduction, through which he could channel his Makuta powers. It was also quiet handy to poke at whatever floated in the vat next to Mutran.

Mutran possessed the 42 Kraata powers, could create Kraata and absorb other beings into his substance. 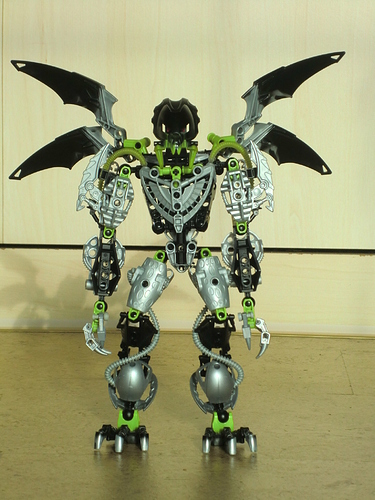 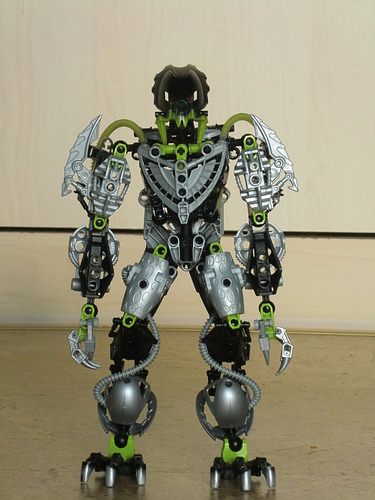 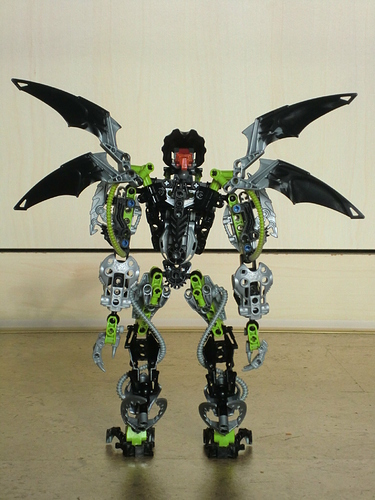 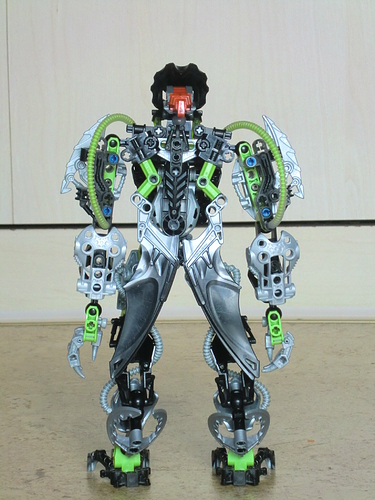 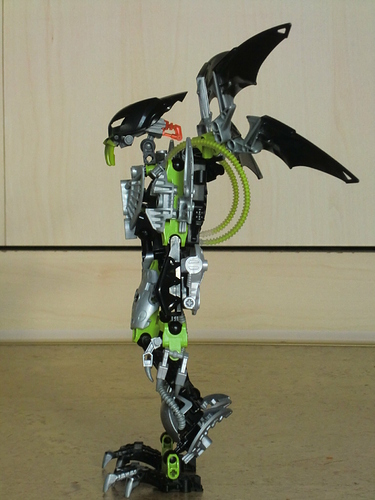 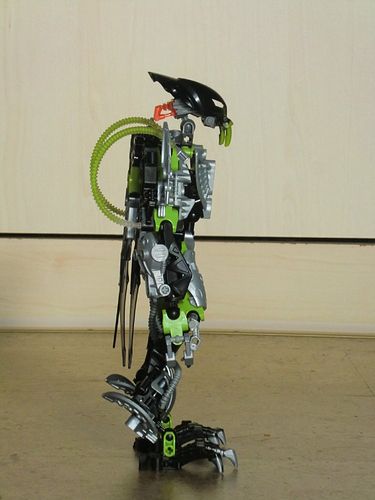 So here he is: Mutran, master of mutations.

He has a simpler build than Jarnat and Kindrix (mostly because of lack of parts) but - and that’s the important thing - his appereance is not bad at all, in fact I really really like how he turned out.

Perhaps some of you may not think the tubes such a good idea, but honestly, I think they don’t look bad at all and without them there would just be something missing on the legs and arms/shoulders.

You probably also noticed, that his wings can be folded on his back. It was more coincidence than intent, but is a nice touch.

Also I was happy that I could for once use a mask again for a MOC without complaining “this mask makes this MOC look like < insert original maskwearer here >”. Custom heads are nice enough, but they’re also quiet some work to come up with.

The only thing I’m not satisfied with is the armor on his forearms, but I couldn’t think of a better one and there had to be armor there. Sure, it doesn’t look that bad, but it irks me nonetheless. Sadly Mutran also suffers a little bit from lime green/2008 design disease, so just ignore the cracks.

Oh, and here are some additional pics of Mutran doing evil things he should have done in the story because the Toa’s way to escape them was very far-fetched in my opinion. 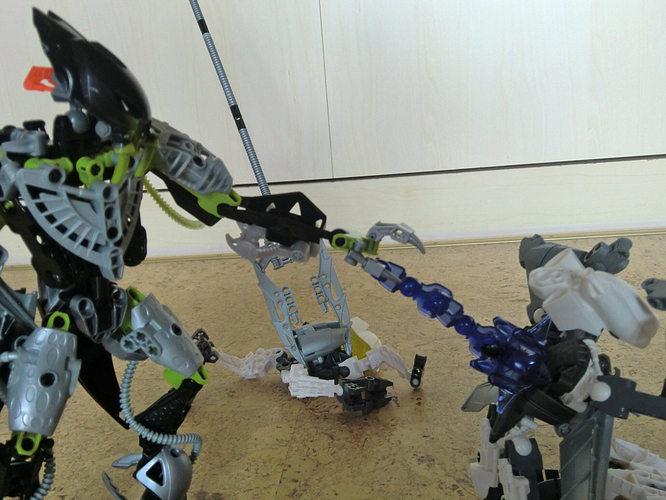 Mutran kills Kopaka and his little sidekick instead of Solek radomly becoming some kind of living Kanohi Hau. 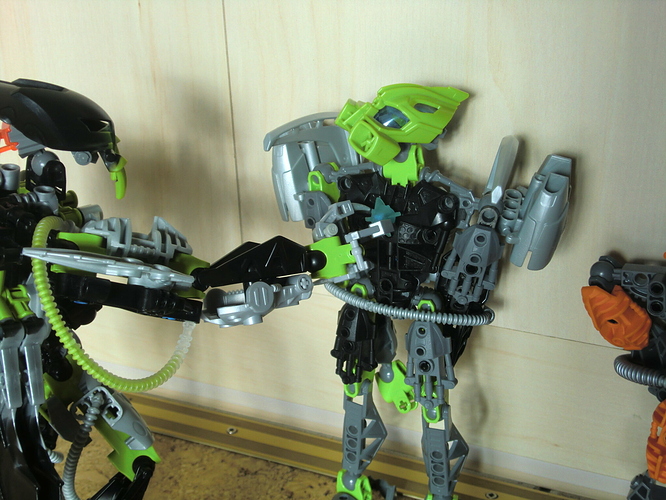 Lewa becomes a Toa of Shadow because Pohatu couldn’t come up with a working plan and execute it in about the second it took Mutran to put that Shadow Leech on Lewa.

And another pic to advertise the Brotherhood Project ;): 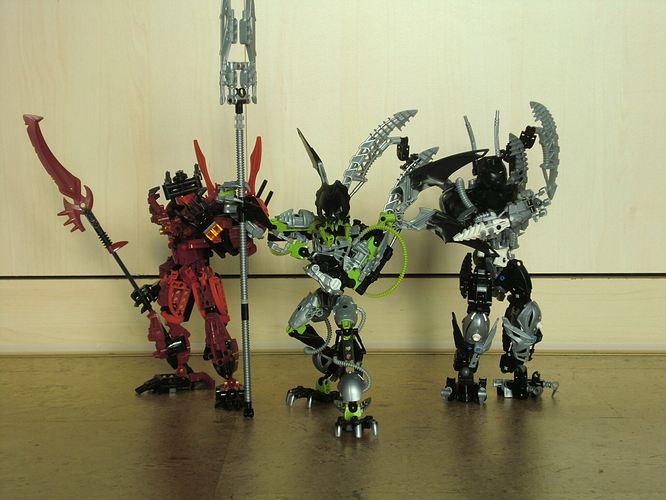 if I may suggest one thing, I would move the tubes connected to the arms 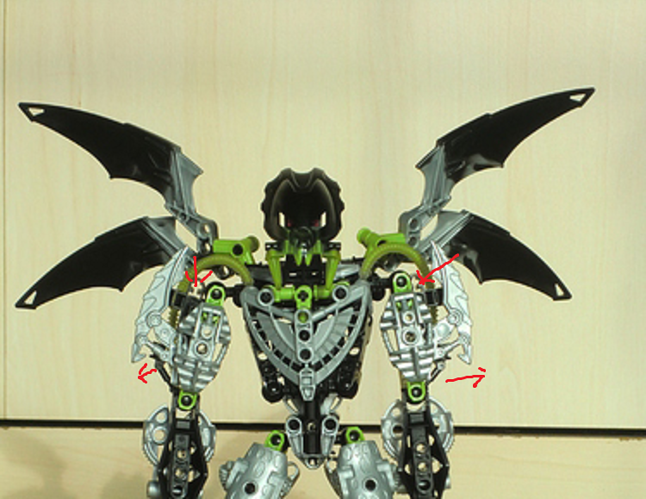 I don’t really get what you mean with the second version, but the first one works actually out pretty nicely. It optically integrates the tubes more into the arms while still maintaining perfect articulation. I’ll post a pic of it … perhaps tomorrow. Thanks a lot for that suggestion!

Captures the look of the original very well.

Nicely done! Part of the reason I like this project is because all of the revamps we do are possible forms the Makuta could have taken, and this certainly looks like a form Mutran would like. Love the way the wings fold, and the overall menacing, spiky look. The legs are also well done.

I think you might’ve missed my post in the Miserix topic, but I volunteered to take up Icarax, if that’s okay. He seemed so lonely up there at the top, and I feel he needs some love…

Oh man, I really like this guy. This is how I imagined Mutran looking before his mutation (except maybe a little thinner). The silver, while being a dominant color, really looks good on him for me. I just wish there was a little more lime green.

Oh yeah, this guy’s great. Love the wings, the color scheme and especially the build.

You did a great job.

Ok, the pics of what @Payinku suggested: 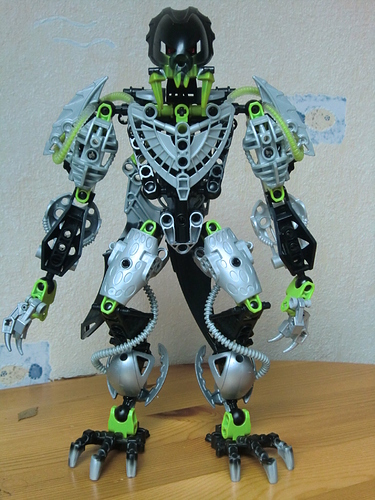 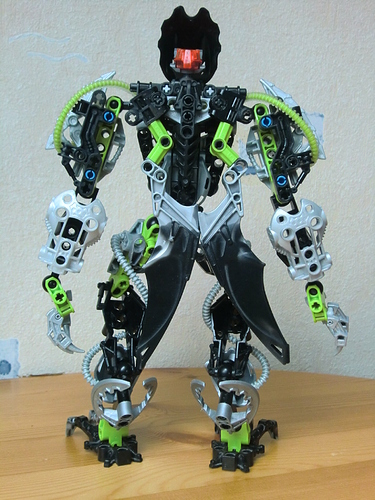 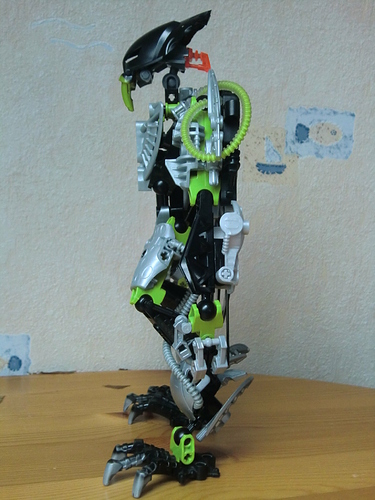 While my original version doesn’t look bad, I have to agree that this way the tubes do look a lot more like parts of Mutran’s body. They do hinder articulation slightly this way, but not for “usual” poses.

You know, I just saw Eljay’s recap review of Mutran and remembered my revamp of this mad Makuta scientist.

As I would really like to get more opinions about my version of Mutran (although he hasn’t changed since the last pics I uploaded) and I noticed that there is a lack of epic poses here … well here you go.

I really want to hear your opinions! He’s still assembled this exact way, so I am able to improve him further. I’m still not entirely happy with the armor on his forearms … 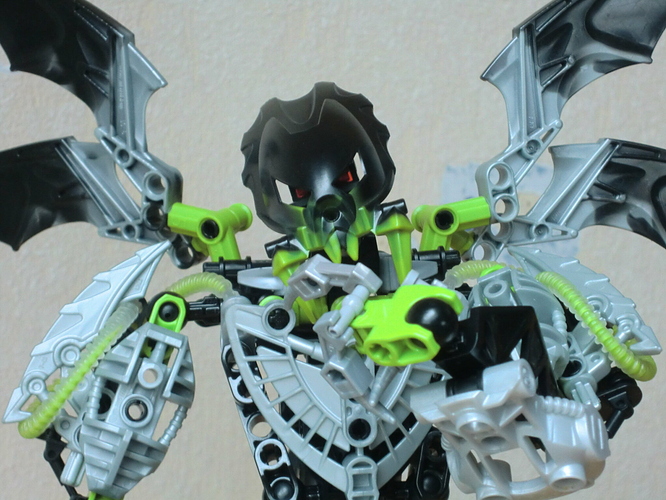 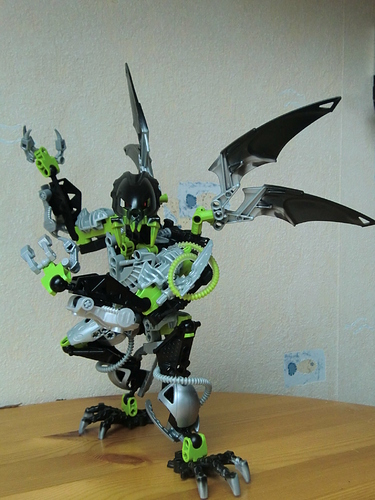 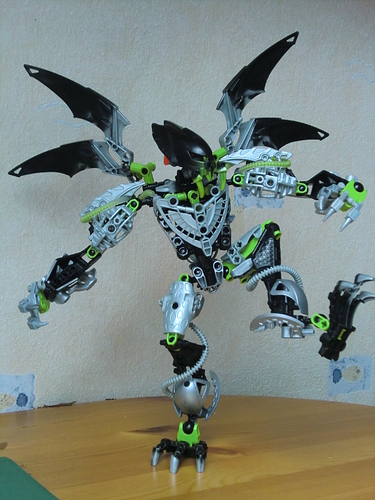 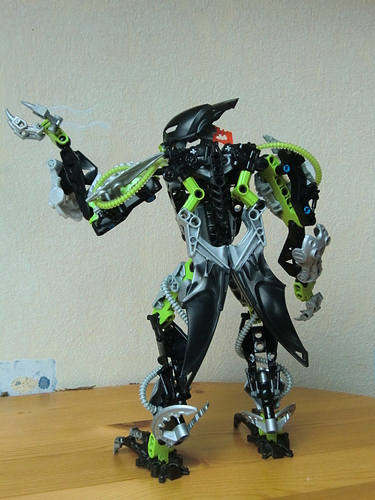 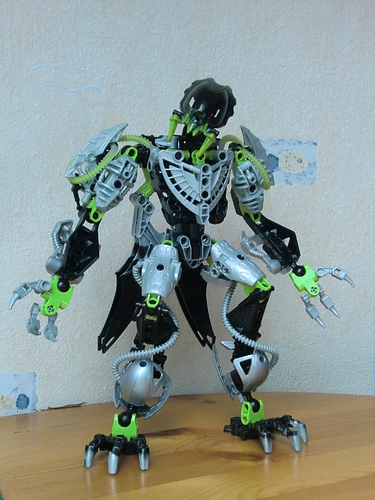 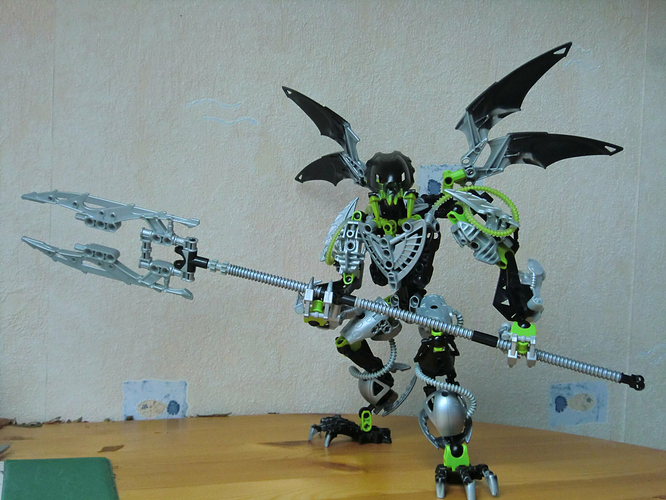 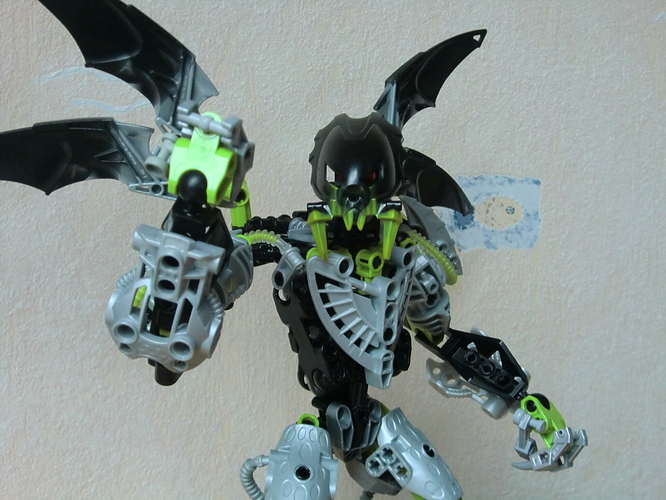 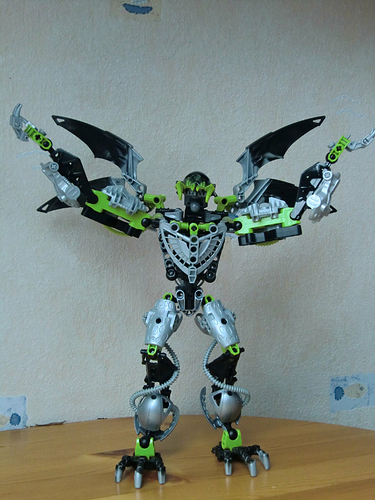 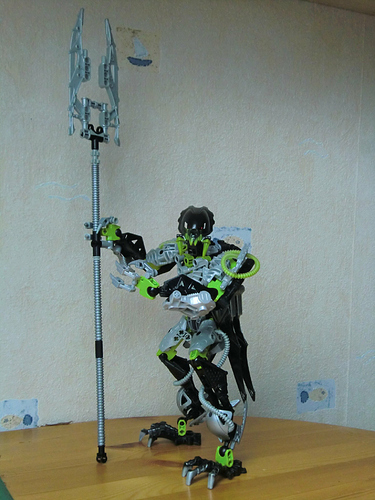 i must say i really like the back of this revamp. i don`t know why though

But I have to say, that it looks better, than it is built

This applies to the torso in general. You would be astonished of what construction is hidden behind the Hordika armor in the front … luckily that thing fits perfectly there