My entry for @Gilahu’s Brotherhood of Makuta MOC Project. 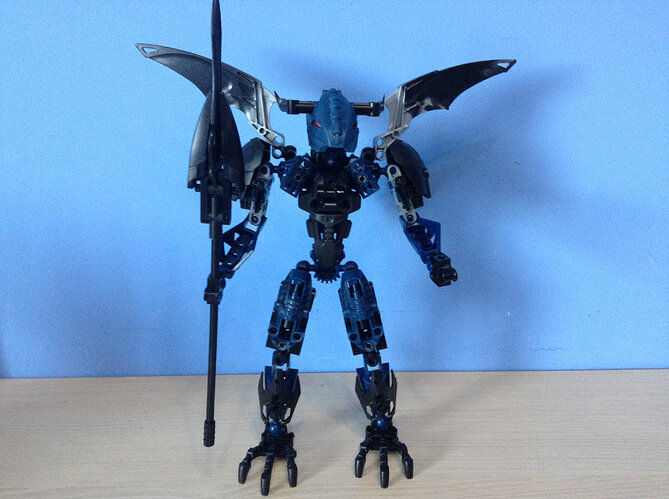 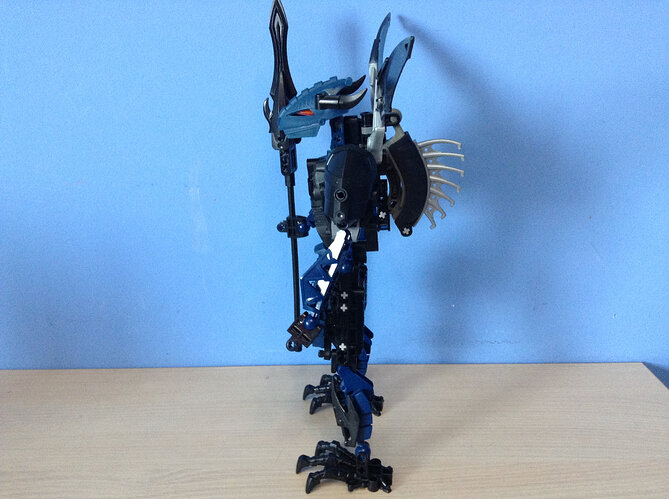 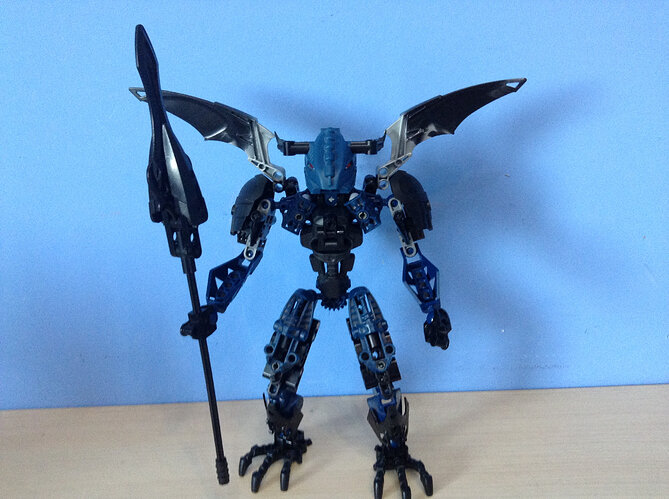 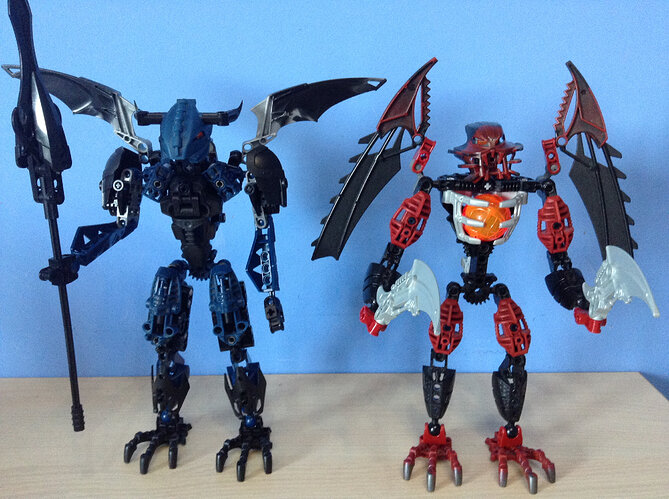 Sadakon was a skilled rahi creator and a guardian that took his job very seriously. After the Matoran civil war, he was assigned to the island of Tenai, inhabited by a few matoran at the time. On a smaller island near Tenai, he built a fortress for himself where he performed all his experiments and rahi tests. He was the creator of many rahi, including the one known as Frostelus, which he made in his image. He visited the matoran villages very often to be sure that there aren’t any problems.
During the Convocation, he joined with Teridax, believing that he could protect the matoran better if the Brotherhood was in charge of the Universe.
After the convocation, he returned to his fortress and continued to take his role of guardian seriously, despite Teridax’s new leadership. Seeing how his Frostelus were pretty helpful to the matoran, he decided to try to make them smarter so they can help the matoran even more. But during the upgrading process, he accidentally made way smart then he should have, and because of their new mind, the Frostelus began thinking that they aren’t treated well and wanted to take the island for themselves. So they started attacking the matoran villages and Sadakon’s fortress, causing a lot of damage and even killing a few matoran. So Sadakon and all the matoran were forced to flee the island.
After he fled Tenai, he went to Destral to come up with a solution to stop the Frostelus. But at Destral, everybody was busy with testing their new Antidermis forms that everybody got recently, so nobody was willing to help him. So he just decided to remain there until somebody would help him. After a while though, he completely forgot about his task. A few thousand years past, and Sadakon fell into a deep disgrace, suddenly reminding himself about the unsolved problem. So he returned back to his fortress, just to discover that a group of toa who were against the Brotherhood had taken it. The Toa took him prisoner and locked him somewhere in the fortress. Sadakon called upon the Frostelus to free him, but his rahi control powers were not enough and the Frostelus destroyed the whole fortress, killing all the toa but one and Sadakon in the process.

Thoughts and CC are highly appreciated.

Wow!
That’s really come a long way. Well done! I love the colors, and it looks really good in general.

We already talked about the MOC enough, I think

Ok, this will take some work:

3)[quote=“LegoDavid, post:1, topic:49666”]
second most trusted lieutenant after Teridax and one of his closest friends
[/quote]

I wouldn’t use the term “friend” to describe the usual relationship between two Makuta. Additionally, the upper hierarchy of the Brotherhood is kinda established at this point, so your Makuta featuring anywhere up there is… problematic.

I’d rather say something along the lines of him taking his job as guardian seriously.

5)[quote=“LegoDavid, post:1, topic:49666”]
During the Convocation, he was one of the loyal Makuta to join with Miserix, but seeing how they were outnumbered, he joined with Teridax, but still being loyal to Miserix in secret.
[/quote]

Doesn’t work. All those who sided with Miserix at the Convocation eventually changed sides, but the mere fact that they initially stood with Miserix was enough for Teridax to have them removed.

(On a sidenote, I’d actually prefer him to be on Teridax’s side - maybe something along the lines of him deciding he could better protect and guide the Matoran when the Brotherhood was in charge of the universe?)

6)[quote=“LegoDavid, post:1, topic:49666”]
he decided to come up with a plan to assassinate Teridax, and him becoming the new leader of the Brotherhood because of his new position as Teridax’s lieutenant
[/quote]

First, assassinating Teridax is a pretty unoriginal idea at this point which I’d rather not have in here. Second, there’s no way he’s Teridax’s lieutenant.

7)[quote=“LegoDavid, post:1, topic:49666”]
After a while, his plot to assassinate Teridax was discovered by Icarax, who attacked his Fortress with an army of Manas. Sadon responded by defending himself with an army of Frostelus, which resulted in a great war taking place on the small island. Leaving his rahi to fight Icarax’s Army, he tired to flee the island, but was caught by Gorast, which also showed up, hearing about the battle taking place there. Sadon was powerful, so he manged to defeat Gorast by knocking her down, but he was severely injured. Icarax came soon after, and taking advantage of the injures caused by Gorast, he defeated Sadon and killed him.
[/quote]

I’d leave Icarax and Gorast out of this, as well as any big battle over the island. Given what is known about the Frostelus in canon, it might make the most sense that they somehow went out of control (maybe because your Makuta modified them to make them more intelligent and sapient?) and caused the Matoran as well as your Makuta to flee Tenai.

It might be interesting if after this failure your Makuta fell into disgrace and in order to redeem himself eventually tried to retake Tenai… only by now a group of Toa who distrusted the Brotherhood had taken up residence there, so your Makuta was captured.
Your Makuta then called upon the Frostelus to rush the fortress and free him. Them being somewhat sapient, however, you Makuta’s Rahi Control powers weren’t enough to rein them in, so the Frostelus killed him, too, instead of freeing him.

Ok… I pretty much have to change the whole story, but Ok.

Yeah, I’m sorry, but it just has to work both with canon lore and 97 other Makuta backstories at this point.

Just changed the whole story, how is it now?

Teridax openly told his brethren at the Convocation that they were going to strike at Mata Nui and take his place as rulers.

So thanks for participating, MOC accepted!

Just edited that too.
Thanks for having me in! I am looking forward into other MOC projects from you!