We have failed as a species.
We made...
the emoji movie.

Let's go over it.
http://www.slashfilm.com/the-emoji-movie/
The movie, is, I quote:

When shown the concept art, the site then said:

"We were shown concept art of the hero emoji characters taking a boat trip in a music app. The concept art didn’t look too promising."

Crossovers from other apps were said to be included in the movie. The emojis are reported as going to Spotify, Angry Birds, and possibly a slew of other apps. 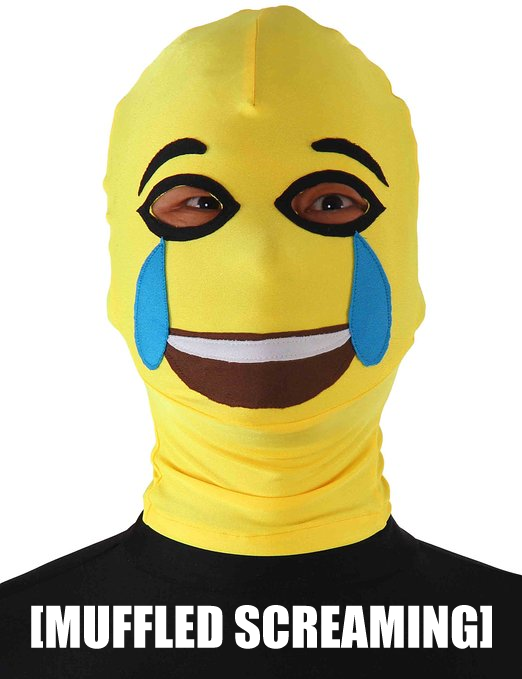 No just no
Please no
April Fools is over
Stahp plz

"Do you think God stays in heaven because he too, is afraid of what he's created?"

I now understand this quote.

Movies have changed.
It's not about art, 3-dimensional characters, or solid plots. It's an endless series of horrible attempts at getting a quick buck, made by corporate businessmen and shameful directors. Movies, and their consumption of time and money, not to mention their inexplicable level of flaws, have become a well-oiled machine.
Movies have changed.
ID tagged criitics watch ID tagged movies, write ID tagged reviews. Nanomachines inside their bodies enhance and regulate their critique. Rage control. Sensibility control. Nausea control. Theater control. Everything is monitored, and kept under control.
Movies have changed.
The age of art has become the age of pandering. All in the name of averting catastrophe from bankruptcy.
And he who controls the theaters, controls the crowd.
Movies have changed.
When the theaters are under total control, movies... become routine.

This proves that we are doomed as a species.

I just want to burn this idea with fire.

Alright, I can understand some of the reasoning behind this. Seeing the success of Wreck it Ralph and the "popularity" of emojis, somebody put 2 and 2 together and thought they could make some decent story taking place inside the phone, which in all honesty is an interesting idea because these devices now encompasses a major part of our lives.

But this? This is pathetic.

What made Wreck it Ralph work was that the base material is known to already have characters and worlds. That's basic game stuff. Emojis do not stand for characters, they're symbols for communication. They are literally faces based around one expression.

Honestly I want to see how this movie does, because when it tanks I have to wonder how spectacular it could be.

I wonder if any people actually support this movie's existence.
And by people, I mean humans.

I wonder if any people actually support this movie's existence

Tweenagers who play Clash of Clans.

I know that also there's a PEZ Movie, too.

But the LEGO movie not only worked as a story because of the many worlds it had and the way LEGO executed the characters themselves, but it also worked as a lesson to be creative and explore your creative boundries.

This movie is going to be about emojis traveling through things like Spotify.

Man, those first few comments getting into theology. Anywho, I'm not going to see this, unless it's to laugh at it akin to sharknado