The Great Debate: Goku vs Superman

The age-old debate, the unanswerable question:
Who would win, in a no-holds barred, one on one fight; Superman, the man of steel, or Son Goku, Super Saiyan! 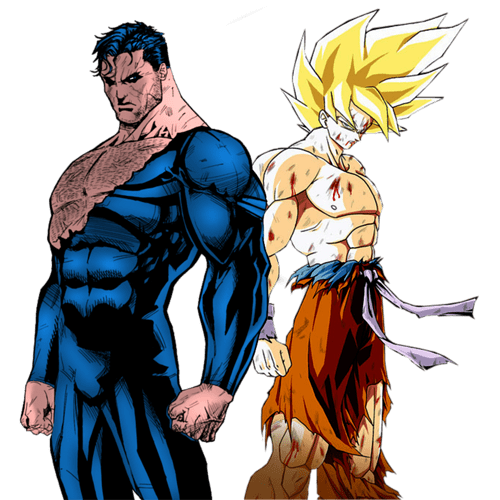 goku_vs_superman_by_jayc79-d5skzo7.png894×894 813 KB
This topic is for a (mostly civilised) debate, about the post Crisis Superman, and Son Goku, not including GT or any other non-canon representations. Also, feel free to reference the Death Battle, but they did get some things (alright, a lot) wrong about Goku, and probably about Superman.

And so, without further ado, let The Debate commence!

As said by Screwattack’s Death Battle, Superman has no boundaries, Unlike his Japanese counterpart. This means Superman is stronger, faster, has more powers, and undeniably smarter.

we have a versus topic. this is unecessary

Goku wins cause superman is scrublord who kills civilians

Superman would probably win, though I personally think Goku’s the better character.

@LelouchViBritannia Correction: Superman is the civilian killer in the “Man of Steel” Movie, which we do not talk about.

@fangface1 I’ve always seen the two as characters that don’t really change much.

characters that don’t really change much.

On one hand you are kind of right, but neither Superman nor Goku were always the God-like figures we know them as today.

Isn’t this debate sorta useless? You know, with the different medias and the different strengths and weaknesses, along with the fanboy debates and such?

“hey why are we fighting?”

“I don’t know, wanna go grab a beer or something?”

“I don’t know, wanna go grab a beer or something?”

Goku would take too many episodes to do any damage to Superman.

Superman always wins, and will always win, hands down. I don’t even know how this argument has evolved so much.

Superman teams up with SHAZAM to beat up Goku.

The real winner of the fight is Waluigi

what are the limits of Superman and Goku?

I dunno. I like Goku better solely because I grew up with him, but maybe Superman could beat him? Maybe the other way around?
I kinda don’t care.

Ultraman vs Superman.
There’s something.

I think I remember some video where the two of them fuse.

In my humble opinion: Superman sux, Goku is betterer because he can go super saiyan.