For longer than anyone can remember, stories would be shared over drinks in the taverns or by conspiracy theorists about a group of mysterious beings who guide the Island’s affairs behind the scenes. Some go even further and claim their influence extends beyond Luna Magna and the stars beyond. 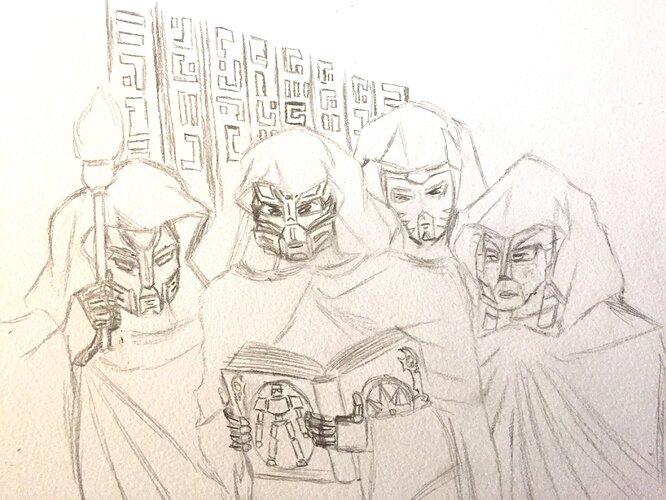 In the era after the Kanohi Crisis, the Toa took the ultimate drastic measure and took the masks and the knowledge of how to make them away from all of the Matoran. Some relinquished their Kanohi without a second thought, for they too feared another calamity. Some refused to go down without a fight.

In the ensuing battles, many records and artifacts related to the Toa were destroyed, whether it was intentional or simply collateral damage. In the heat of battle, some combatants claimed to have seen shadowed figures running away carrying books or artifacts away. At first, this was simply written off as opportunists looting through the wreckage hoping to make a quick profit. The authorities were baffled when “copycat criminals” were found tied up and bereft of their ill-gotten gains. The would-be perpetrators gave descriptions of their attackers matching those of the shadowy figures at the battle sites.

The Motarans, who lived in lawless territory, had suspicions that these “shadowed Matoran” were a rogue splinter faction of the Dark Hunters or one of the Merchant King families, which both parties vehemently denied. After all, what good were a few crusty relics?

Should you ever have the fortune (or perhaps misfortune) of meeting one, try telling that to a member of the Hand of Arthaka. Legend has it that they existed since the era that followed the fall of the brothers Makuta and Ekimu and tried to offer a guiding hand to the separated and listless Matoran, though were not very successful in some cases. In the era that followed the Kanohi Crisis, they engaged in the task of trying to preserve as much knowledge of the old world as possible, including the forging of Kanohi masks and other powerful artifacts. But to what end? And are they on the Toa’s side?

While I was writing The Legend of Vakama, there were a couple story threads that would often crop up, namely that Dume would exist as Merlin-esque figure, whereas Roodaka would be the analogue to Morgan Le Fay. The idea of an organization that served Ekimu and valued Creation and free will came up. Their philosophy is that the Matoran need to be able to look after themselves, and in doing so, fulfill their destinies.

Drawing influence from G2, the organization would be led by 6 Protectors, each representing one of the six basic elements. As Lighting is isolated from the rest of society, they do not have a representative on the council.

At the time before the Kanohi Crisis, the council consisted of: 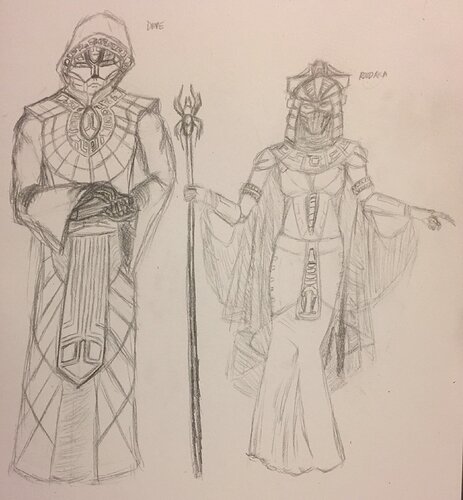 Surel, the Protector of Ice (click for full view) 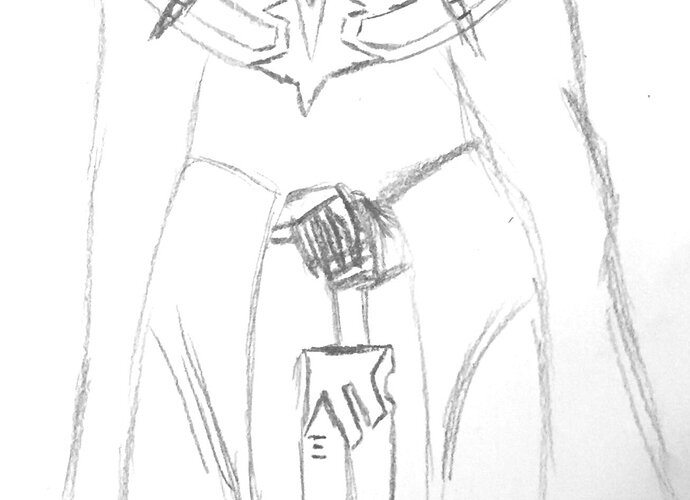 Dogu, The Protector of Stone 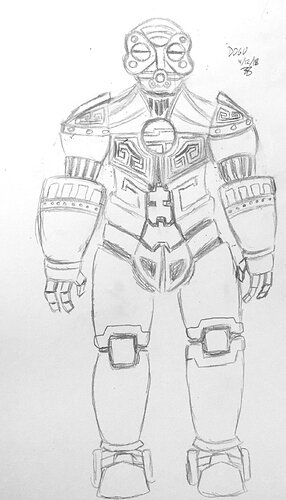 Roodaka, the Protector of Earth mysteriously betrayed the Hand, killing Dume. The fate of the remaining four protectors remain unknown as of yet. 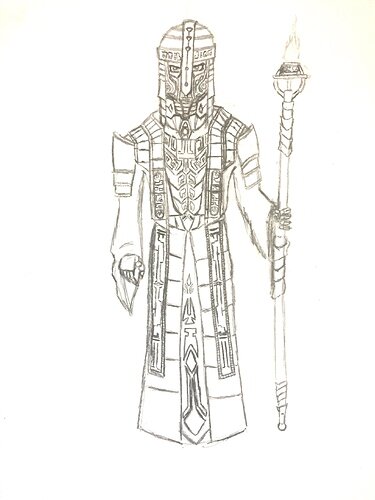 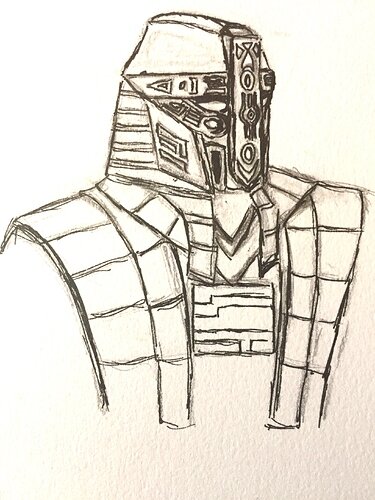 An initial sketch of Dume 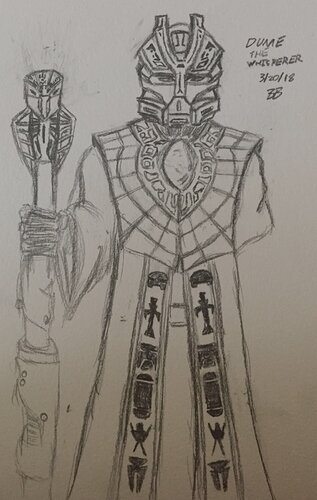 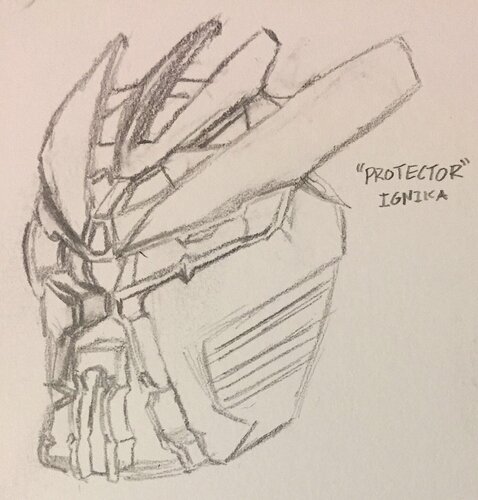 An Egyptian inspired version of the same mask 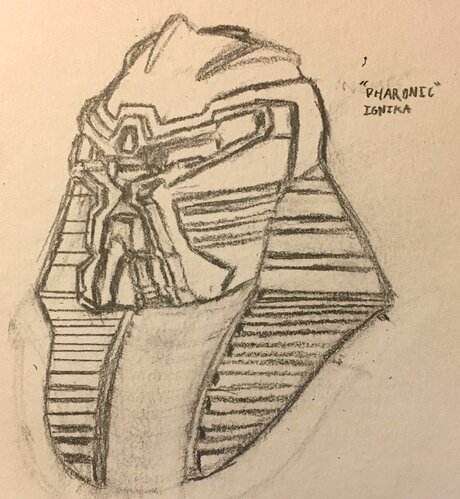 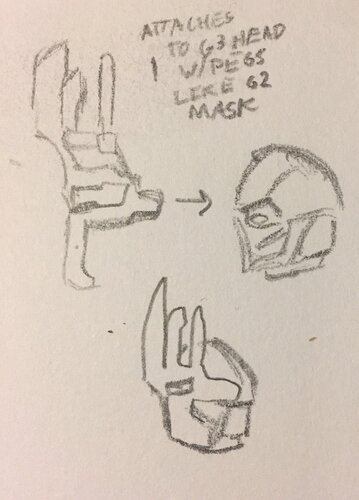 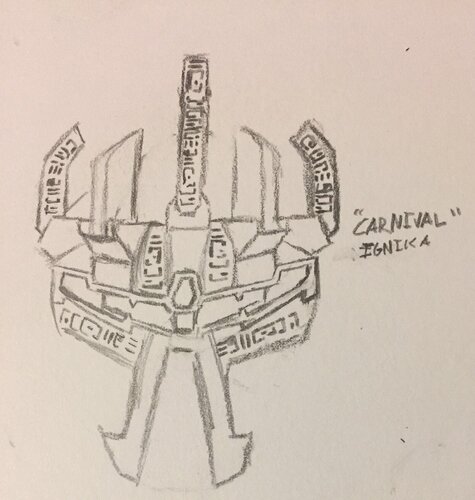 A “Kiril of Ekimu” inspired by @Kardax’s “Huna of Ekimu”, which was based on an idea that all members of the Hand would have the Ignika/Great Spirit Robot symbol inlaid onto their masks. This would’ve been Dume’s mask, but I liked the look in my initial sketches much better 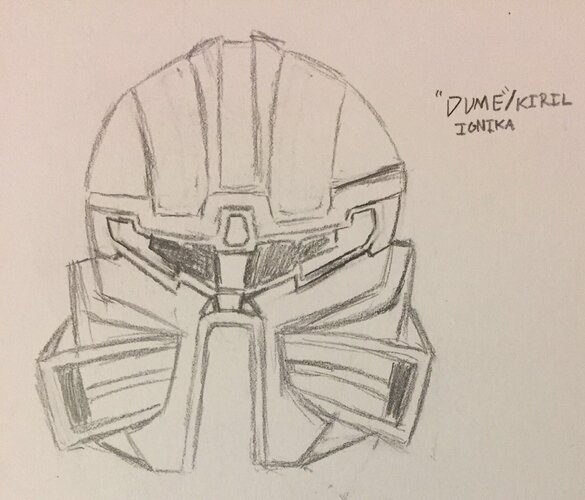 I like the concept, and a lot of the mask designs! I especially like the Stone Protector.

The rest, however, I’m not a fan of the more humanized depictions, especially in the first image. I know that style is based on Var’s animated series designs, but I’m personally not at all a fan of the really human facial features.

That’s my personal opinion, though, the concepts here are great!

Interesting you should mention the humanized depictions. Var’s designs were a stylistic influence, but I also drew a lot of inspiration from the Mirimax films and real world cultures. The Fire Protector for example is meant to invoke some western and eastern aesthetics, think like a cross between a Samurai and a Wizard.

The sketch of Roodaka also draws heavily from Egyptian court clothing, owing to the Mirimax movie’s depiction of the cobra hood/ ponytail/ headdress attachments. Dume is definitely a little more human looking with the cloak covering most of his body, but I think in the third drawing I did of him, I tried to hit that sweet spot between human and robot without looking too much like something out of Power Rangers. Though you be the judge of whether or not I succeeded!

This is some of the best Bionicle artwork I’ve seen on the boards! Very impressive work keep it up.

Great work on the designs, looks great with the Egyptian clothing and armour

Some more concepts for the Hand of Arthaka!

Here, we have Dogu designed after his namesake, the Japanese clay dolls from the Jomon period. I imagine this guy was probably a very sickly Motaran who initially built himself various prosthetic enhancements until finally building himself the huge suit of armor picture here. @Kardax suggested that I draw him with a body that mimicked Pohatu’s chest-to-hip proportions from the G1 figure.

An initial sketch of Dogu 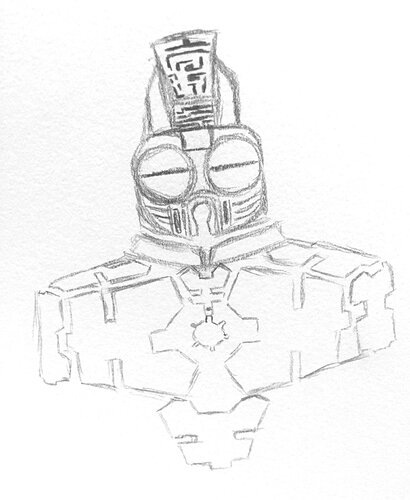 A Kanohi Mask inspired by one of the earliest prototypes of the Toa Inika back in G1. I want to use this for a character design, and I’m debating whether I should give this to Mizuni, the Water Protector from Dume’s time, or if I should save it for the Water Protector of the current generation. 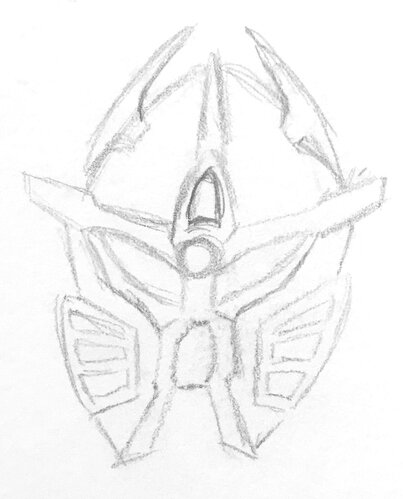 Lein, The Protector of Air is a harder design for me to get a handle on. I’m debating whether I should draw him with an Incan emperor-inspired design, or like a Japanese Komuso monk. I like the way the Incan elements can be incorporated into the Great Mahiki, but I feel like it makes me think too much of Matau 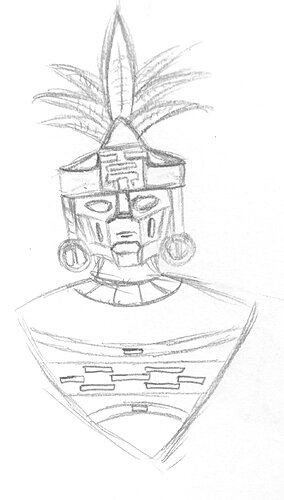 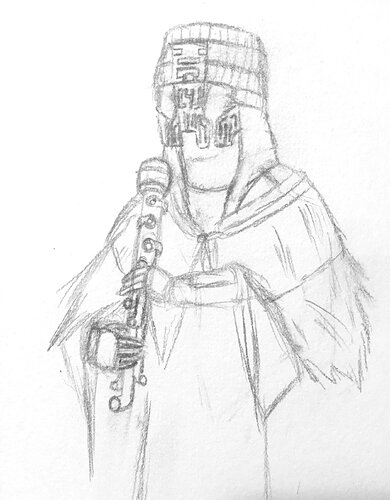 Whatever design I will end up going with, I think I definitely want to fit the Le-Koro flute from G1 in there somewhere, and the Lewa Nuva symbol is a must. I’m liking the idea of a straw cloak to mimic the “bird’s nest” aesthetic that Le-Koro had in the MNOLG 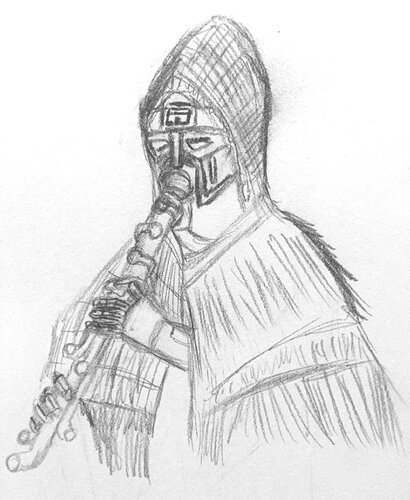 Another concept of a Mangaian member who serves as a warrior guard, the color pallet inspired by Turaga Vakama: 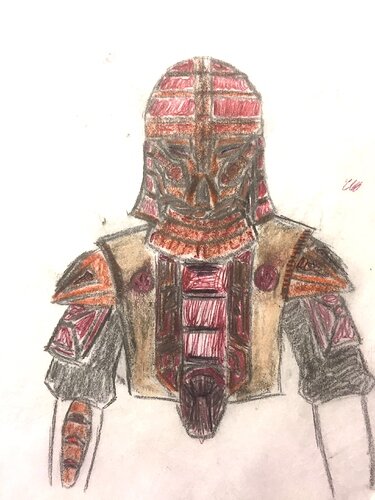 Haven’t figured out a design for the current Earth Protector, but I love the idea of him being a Candlehead 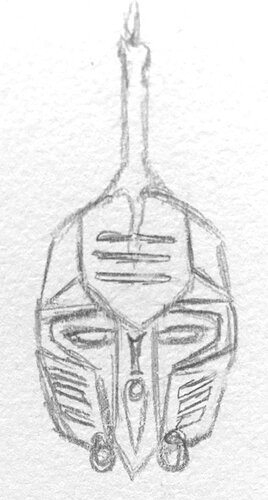 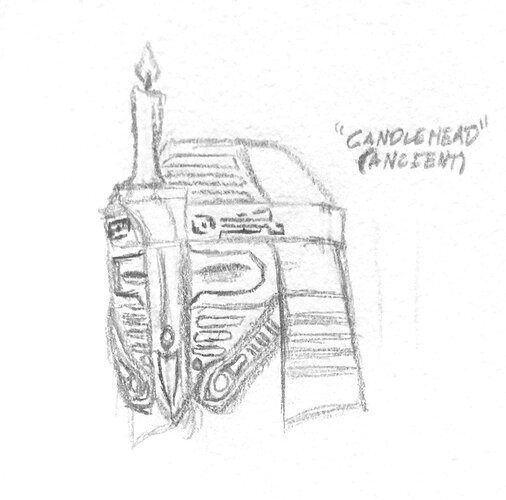 but I love the idea of him being a Candlehead

The archives speak of a great legend… a matoran of Earth who stood above all else in his region, he was the hand, the light, the fist and the shield.

His name has been worn from scriptures but images still exist, the matoran of earth know this great protector only as…

The archives speak of a great legend… a matoran of Earth who stood above all else in his region, he was the hand, the light, the fist and the shield.

His name has been worn from scriptures but images still exist, the matoran of earth know this great protector only as…

The first song that popped into my head after reading this…

Even his mask reminds me of a dragon priest’s, and that’s not a bad thing

I know this will be edited for double posting, but could you create a list of each generation of Protectors you’ve established so far (just edit the initial post so everything’s in order)? That would help with navigating the topic.

The Initial post has been edited to include the initial list and pictures of the protectors thus far. It will be edited as I post new designs