Yes, I know canonically the Jedi Exile is a female, but when I played KOTOR II I was a bearded guy with a green lightsaber. Also, the watermark is there because I don’t want this easily stolen. 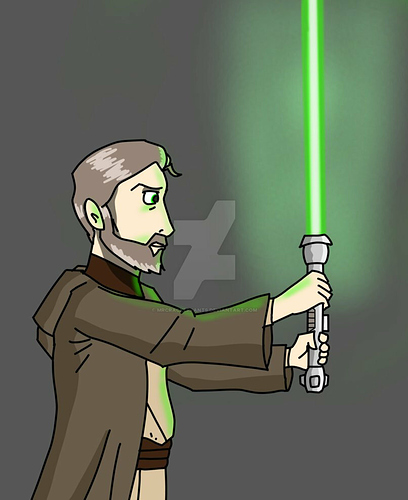 The Jedi Exile, after collecting all the pieces, builds himself a green lightsaber, signifying his devotion to be a Jedi Consular.

I drew this after completing KOTOR II as I found it to be a fantastic game, but unfortunately had a few cons which are big and cannot be ignored. Regardless KOTOR II is a fun ride and I would totally recommend it to anyone, as long as they have the Restored Content Mod.

@Chronicler your character must be an ancestor of Kenobi

I actually based it off of this character model I used in game, which albeit does have and beard and whatnot to give it that kinda look.

KOTOR remake? where are you?

The left hand kinda clips through the saber.

The left hand kinda clips through the saber.

You mean like what it does in the actual game?

Nah, I think I see what you mean, but could you clarify a bit more?

Really, it’s just a matter of spacing. The lower part of the hand looks to be right next to the sabre, especially with the position of the pinky, but then upper hand leans to the left (his left), as evidenced by the light from the saber shining on it, thus making it look like it’s going into the sabre. Or he has a weirdly-shaped saber.

Hmmm… I must have made a lighting mistake then, or maybe a depth mistake. I’ll keep that in mind next time.