Yikes. That’s terrible. Again I’m really sorry to hear that. I’ll never understand how a parent could hate their own child just for wanting to be themselves.

That I definitely get. Unrealistic transition goals is a problem that plagues many. Myself included.

I tried casually mentioning trans people to my dad the other day. He proceeded to rant about “guys wanting to wear girls clothes, use girls bathrooms, play in girls sports”. He somehow managed to pick all the things that don’t apply to me:

At the suggestion of a friend I decided to use a face change filter app, just to see how I might look as a girl… I saw my face looking back at me, in a way that I knew I wanted to be. The feeling in my heart was indescribable. My first taste of gender euphoria.

I tried this yesterday, thinking I might have a similar experience. What actually happened was, uh… well, bear with me as I try to explain this.

I look at my own image and I can’t stand it, I see a person I don’t want to be, even though I can’t put a finger on why (but it was worse when I had facial hair, much worse). There’s a reason I avoid my reflection – I see it and think “I can’t stand that that is me.”

But when I saw my face morphed to a girl one, it still felt wrong. I thought it was just that it still looked so much like me, but that wasn’t it. The issue was that some part of my brain was cognizant of the fact that “this isn’t real” and refused to accept it as reality. I look at it and can only see what I don’t look like. It wasn’t that it didn’t feel right, it was that I knew it wasn’t real.

It took me realizing that, and thinking to myself “what if it was? What if this wasn’t an image edited by a computer, but the face I saw in the mirror?” to finally get past it, to see an image of myself that didn’t feel wrong.

I JUST GOT PRESCRIPTIONS FOR HRT!!!

By the way, have you started on this yet?

I think I understand the idea. Sounds like a rough predicament, but at least it’s an improvement.

I tried casually mentioning trans people to my dad the other day. He proceeded to rant about “guys wanting to wear girls clothes, use girls bathrooms, play in girls sports”

Blah. Just spitting out all the same, tired, overblown transphobic ideas I’ve already heard a thousand times before. What really bugs me is how people think someone would be willing to go through all the trouble of transitioning, all the pains of redefining who you are and facing horrible discrimination for it. All just so you can cheat at sports or peep on girls in the bathroom. The first is just a ridiculous idea outright, and the second doesn’t even happen in the first place.

By the way, have you started on this yet?

I have! I’ve been taking hrt for a whole month as of a couple days ago. I’ve already noticed mild breast development, as well as some other smaller effects. And overall I feel like I’ve been a lot happier since I started.

Awesome! Good on ya.

In a bit of personal news, I finally got a new name tag for work! I really hope it’ll help reduce the constant misgendering I get from customers. But even if it doesn’t, it still feels nice to have. 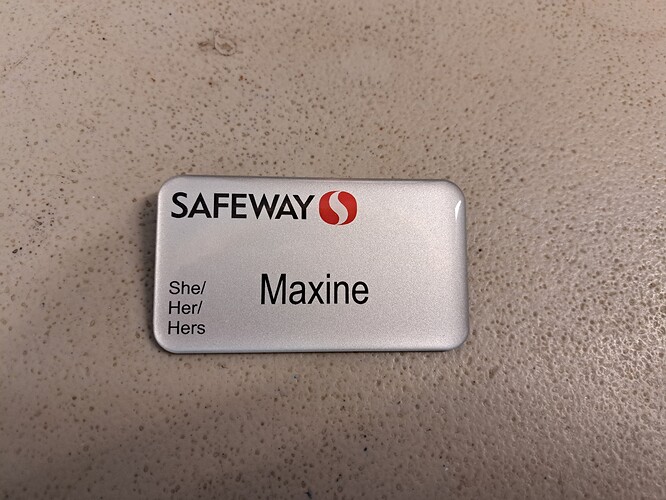 Sure does. Been working there for a little over three years now. Good job. Stressful at times, but it’s gratifying. Though with rumors of a potential merger with Fred Meyer coming in a few years, it may not last too much longer.

To get back to the topic, I had my three month follow up appointment for my hrt. I’ll need to go into a clinic when I have the time to get some labs done. Hopefully it’ll all turn out well.

Hell yeah! Bi pride! Wouldn’t be the weirdest awakening I’ve ever heard of. Everyone finds out in their own ways and in their own times.