would they have guns?

Anything more advanced than a revolver will have to be changed

That seems to be what every current entry has in common

It makes my job easier.

Just a few questions as I craft my perfect edgelord.

What are the rules on weapons?

And what are some ways I can tie in my backstory with the worldbuilding? Or am I an amnesiac? That wasn’t clarified super well for me.

No not an amnesiac, your memories of the last two resets are just fuzzy.

And what are some ways I can tie in my backstory with the world building?

Pm what you have in mind.

What are the rules on weapons?

Nothing more advanced than the early 1800s.

also purely to make it easy to read what is the name of this Sanctuary, and is it understood that it is the one we were born/have grown up in?

what is the name of this Sanctuary,

Sikkerhed Or sanctuary 89.
(Danish for safety)

and is it understood that it is the one we were born/have grown up in?

edit: As far as I am concerned, these are what her two revolvers look like: 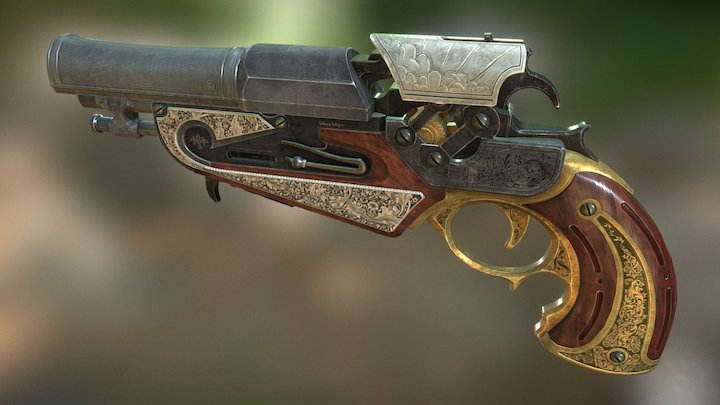 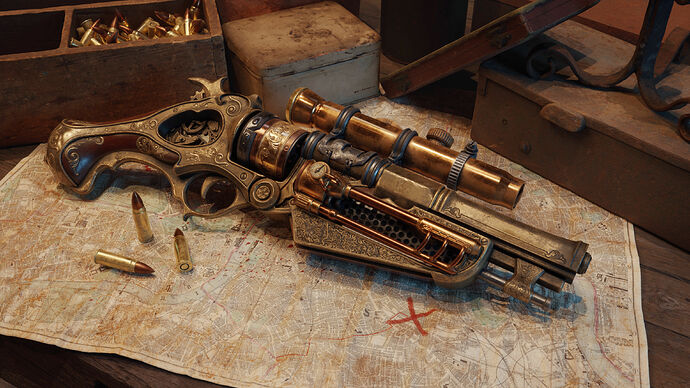 Adele avoids thinking about her life before The Streets.

The Streets - her own term for the time in her life where she was living off of scraps and picked pockets. Sleeping amidst the smog alleys and rabid dogs. It was on one of the many nights alone on the streets that she first met Rafe Valentino - pickpocket artiste, swordsman, and vigilante freedom fighter extraordinaire - The Viscount. Or at least, that’s what he would become. But at first, he was just another teenager on the run from the law to avoid being placed in another orphanage in the slums.

Bonded by their mutual hate for the city’s government, the two befriended one another, traveling together first from orphanage to orphanage, and then when they were marginally older, criminal militia to smuggling company. They eventually ended up a part of a major resistance cell, working to overthrow the government and uncover the secrets behind the Sanctuary technology.

While Adele worked jobs suited to her experience, Rafe dedicated himself to helping the impoverished people in Sikkerhed. This charity began to build many things for him: namely, fame and infamy. Fame among the slum-dwellers, fame as a vigilante, a Robin Hood of the modern age - The Viscount. And infamy among the law enforcement - no one likes a vigilante, especially when it’s your supplies they’re handing out.

Adele had also begun amassing infamy, but of a different sort. A more disturbing sort. And it was this infamy that eventually led to the death of The Viscount - of the only person she had every truly cared about, or who had every really been her friend.

Now, she fights to uphold the reputation and legacy of her dead friend - wearing the clothes that made him iconic, doing the deeds that made him the people’s hero.

Definitely not my best work but to be fair I came up with it in roughly 30 minutes.

Boy has it been a hot minute since I’ve done anything like this. Reminds you of the good old days, eh @TheCobaltCorsair?

Made a map of Sikkerhed. 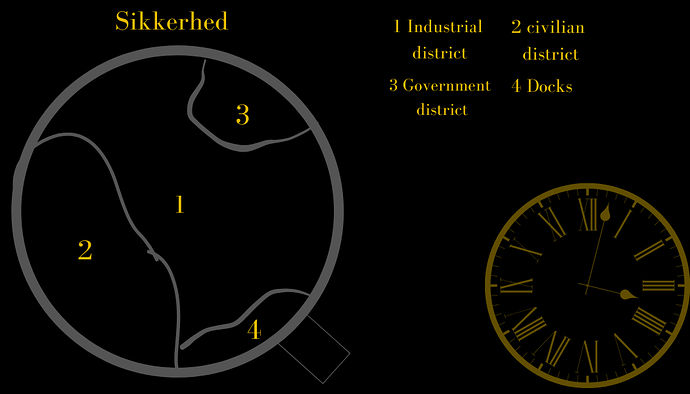 I warned you man, steampunk is my genre

Sign ups end once we have enough players, but its first come, first served. So if you want to join you need to do so now since we only have one spot left.

Do you plan on starting as soon as you fill up all the slots?

While I would love to start it up on February sixteenth. I think I’m going to wait a week to give me enough time to write up some scripted events for the first two chapters.

Equipment/Tools/weapons: His main weapon is a cane-sword, but also carries various medical powders and syrups within is overcoat, some of which are actually poisons. Additionally, over his right hand, he wears a brass/leather gauntlet to hide a disfigured hand (his hand has limited mobility, but can still move somewhat). He always wears a regular glove on his other hand, so that is finger prints can’t be found on his weapons. Dr. Agler also carries a golden pocket-watch.

Personality: Dr. Agler is a seemingly kind and jolly person. He is good with children, and is very well-mannered. However, much of his past is a mystery to his neighbors, and he may not be the upstanding citizen that people know him as. He has murdered at least two people.

Appearance: Physically, Dr. Agler is a big guy, being around 7 ft. He has a long beard/moustache, and is one of the older citizens of Sikkerhed. His hair used to be a light brown/orange, but is now lined with grey. The middle of his beard is entirely grey and white. He’s pretty strong, though. Dr. Agler wears a large darkly-colored coat and is often seen with a top hat. He’s a well kempt man. He normally wears circular glasses, but also carries a pair of tinted goggles for when he goes strolling in the steamy industrial zone.

Occupation/Job: Dr. Agler was a doctor but is currently retired. Even after being a surgeon for over 20 years, he still remembers most of his patients. Currently he is a philanthropist. His neighbors sometimes go to his house for advice or to let him babysit their kids while they’re away.

Trivia: He is quite wealthy, and has a nice car. He has many children (who are all in their 20s and 30s), some of which live in different sanctuaries. He also has a deceased wife.

If I add more details later, I’ll let you know.

-EDIT 1- @N01InParticular I’ve changed his name to Francis after realizing that there’s already a George in this game. I think Francis sounds better anyway.

Appearance: Austin is fairly tall, but extremely thin. He has some freckles and he has brown hair. His clothes are ragged and torn, as expected from someone who was homeless for so long

Backstory Austin was born on Sikkerhead, but only saw his parents a couple times, as they abandoned the sanctuary looking for signs of life days after his birth, leaving him behind on Sikkerhead. Because of this, Austin was an orphan and had a hard first couple years on the Sanctuary. He had nowhere to go, and barely had enough food to survive. He lived with a group of teens, who also didn’t have a home. He grew a bond with some on them, but sadly, one by one, they all left. There was a period of time where Austin was completely alone with almost no food, until one day when he was 7, a gracious woman took him in as her own. After that, Austin felt as he had finally found a home. He started to get an education, he had a caring caregiver, and he was content. The comfort didn’t last forever though. 7 years after he was taken in, the Woman who was taking care of him died of lung cancer. Austin was devastated of his second loss in his life, and from then on decided that he didn’t want anyone to hurt him again, and went back to life on the streets. He soon remembered why he was so happy to have the woman in the first place: to escape the awful place the streets were. Austin had two options: either go back to the dreaded orphanage, or find a place to work and get money. As you might have thought, Austin chose the latter. After two months, he eventually found a place to work. The pay wasn’t the greatest, but it kept him alive. The business he was working at went bankrupt a year after he started working there. Back to square one for Austin. He brainstormed an idea for what to do, and ended up with nothing except go back to the orphanage, which didn’t appeal to him, but it was his only option. Sadly, no one ever took him in. Eventually, he became an adult, left the orphanage, and found another, better paying job.

Personality: Austin is a person who is driven by loss and guilt. Even though he didn’t cause the losses in his life, he tells himself that it’s all his fault. Austin will rarely make friends with someone, for he feels that whenever he loves something, it gets taken away from him, and he doesn’t want any more pain. Even though he carries the pain of loss on his back at all times, he will keep trying to make things better.

Weapons and equipment: Austin doesn’t carry around much, except for his knife. He is extremely poor, so you can’t expect him to have much. He carry’s around a few dollars at the most, and also had a bag that he stores a photo of him and the woman who took him in.

Current Status Austin’s current home is an abandoned building. The police of his area know who he is, but not where he lives, because of the fact that he changes building frequently (though he has been in his current one for a long time, so the police might know that he’s there) and because of his parents. His life is a bit repetitive, even before the loop, so he didn’t notice it the first time, but the second one he did notice.

I typed this on mobile and my hands are freaking tired.
@N01InParticular

Great! I put a lot of effort into this, and I can’t wait for the RPG to start!

Boy has it been a hot minute since I’ve done anything like this. Reminds you of the good old days, eh @TheCobaltCorsair?

Yeah, it kind of does. Though it’s not Star Wars related, for once

Great! I put a lot of effort into this, and I can’t wait for the RPG to start!

If you haven’t noticed I made a logo 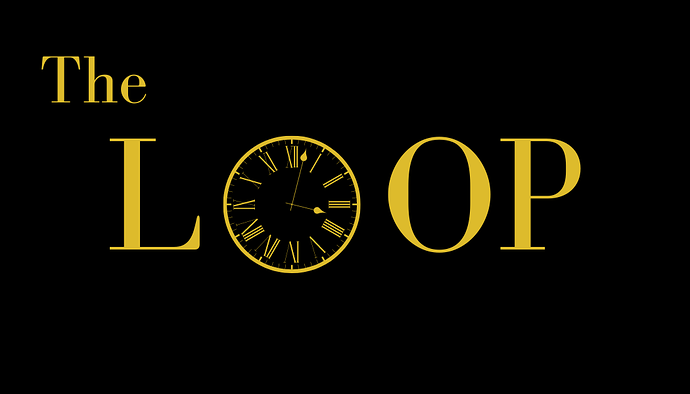 It looks pretty clean, but I feel like it would make more sense if the clock read 10:35.

Yeah, I plan to fix that. But it’s pretty late, so I’ll do it tomorrow.

I think I’m gonna add some stuff to my character, I’ve had time to flesh Ryan/Jade out a bit more, including the reason they have split personality disorder.