The Lord of the Undying Storm (Okotan Adventures: Spider Saga) 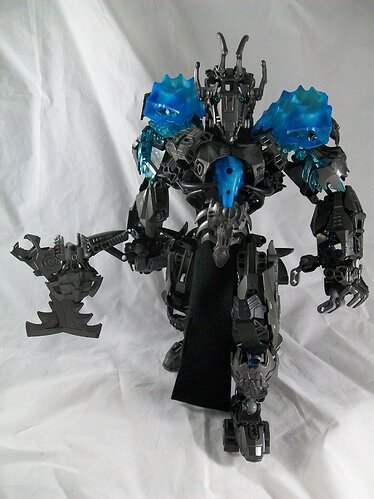 The Lord of the Undying Storm is stoic, merciless, and cruel. In his reign of terror, the entire island of Okoto had been transformed into ice and snow through a long and elaborate process of visiting every point on the island one step ahead of his pursuers. His boasts of arrogance include him being the least of six elemental lords of unbridled power, who were the leaders of Okoto at one point in the past.

Well, I finally got around to posting it. This is the Lord of the Undying Storm, an oc dont steel from the exceptional RP Okotan Adventures. Originally run by @Runa and its sequel currently being run by @jayzor17, it’s a massive collaboratively written novel by members of the site.

So who is the Lord of the Undying Storm? no that doesn’t get tiring to write constantly, just ask Jayzor 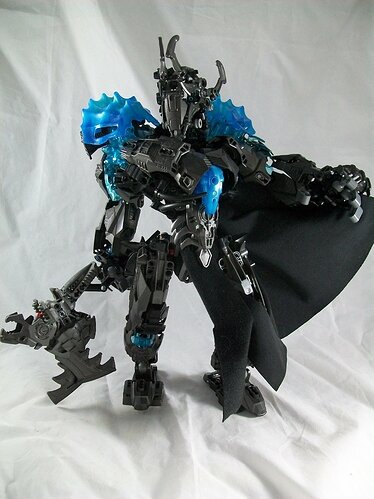 In the lore of Okotan Adventures, there were originally six elemental lords ruling over Okoto, one for each major element. These beings were unchallenged in raw elemental control and unmatched power. unfortunately enough for Okoto and its leaders, Ekimu and Makuta, the majority of these beings were rather evil. Lead by the Sea Queen, a number of them rose up in rebellion against Ekimu in a very bloodthirsty and needlessly violent campaign to put Okoto firmly under their iron grip.

But it was all a ploy by yours truly. The Lord of the Undying Storm manipulated his siblings into warring against all of Okoto and, in the process, was nearly forgotten about in the middle of it. As it eventually failed, he sought escape from the now enraged civilization, and slipped quietly into the realm of shadows for a few centuries.

His triumphant return eventually ended with him assaulting the city of mask makers, making a grandiose mess of things, going toe-to-toe with nearly all of the strongest player characters, and finally getting his comeuppance in the form of a nasty scalp massage by the smash-things end of Ekimu’s hammer.

Enough about him, though - let’s discuss the MOC. No, it isn’t good. Please do not comment on how excellent it is; it is literally fraught with terrible design choices and riddled with issues of poseability, stability, and durability. Especially the feet, how I hate the feet. 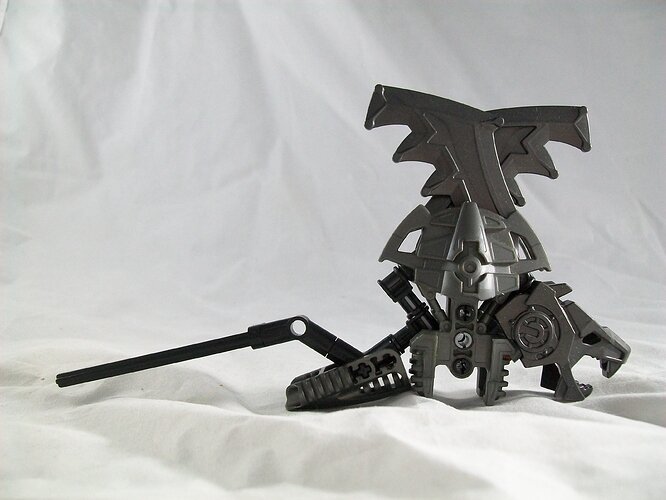 This is his axe, Stormcaller. Initially it clung to him like a piece of his armour and traveled where he did, along with calling lightning down from the sky, but after Ekimu flattened his crown it doesn’t want to listen to him anymore. This is probably the most stable part of his build. 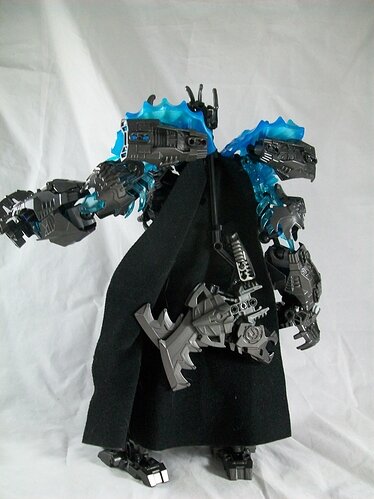 It fits into a hand connector on his back and from the front is practically invisible. 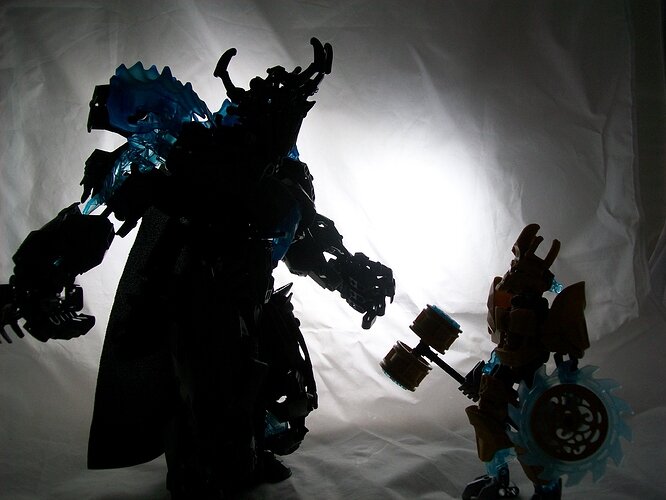 A bit of a size comparison between him and the Mask Maker.

So, that’s the MOC. C&C appreciated; maybe there’s yet another obvious flaw about it that I didn’t notice.

And you may not like him, but the head is cool, I like the axe design, and the color scheme and shoulders are cool looking.

I can see some of the posability problems you mentioned, but I don’t think they detract from the moc that much. I love the gadunka shoulder armor, excellent use of a very specialized piece! My only real critique is the legs, they seem a bit too short (especially in the second pic) and their integration into the body as a whole isn’t nearly as seamless as the shoulders. All in all, it makes for an excellent shelf piece, and is very visually interesting, even if it’s a bit stiff.

Nice use of the Gadunka heads at the shoulders. The axe also looks pretty cool.

I for one love the look of this guy. His Hachette design is unique, the head looks great, the shoulders and chest design look nice and beefy. I honestly don’t know what you’re talking about. My only real issue is that the legs a re a little on the short side.

I personally love the design, it kinda looks like a jumbo okotan, which I think really works for the world that the Lord of Undying Storm is from.

While it can certainly be improved that doesn’t mean what is already created, isn’t a good basis to improve upon. The head is solid and really gives it character.