The Makuta of the Hand, Gharedix

Gharedix is a makuta in charge of oppressing an island called Yuka Nui, while the scientist on it completes his task in building the perfect soldier. This takes place in an AU, where the Toa Metru failed to rescue the matoran in Metru nui and were forced to retreat from their home and gather whatever help they could find from the nearby islands. The Makuta himself built a fortress out of Metru Nui and began to exact his plan. 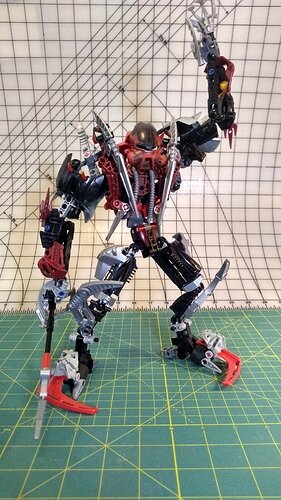 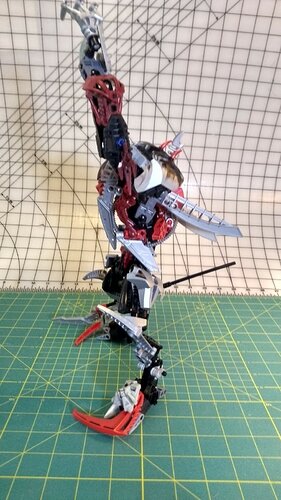 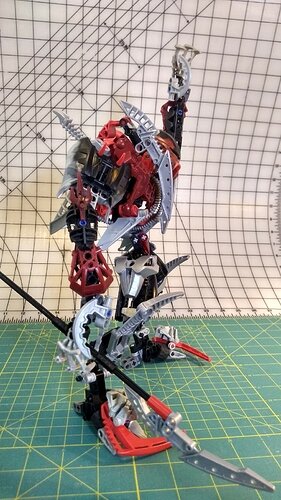 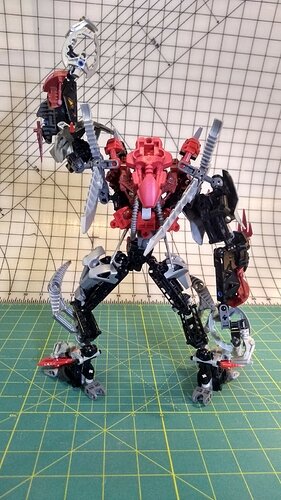 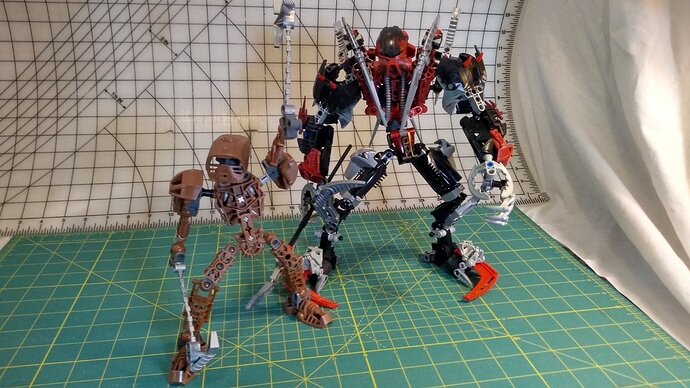 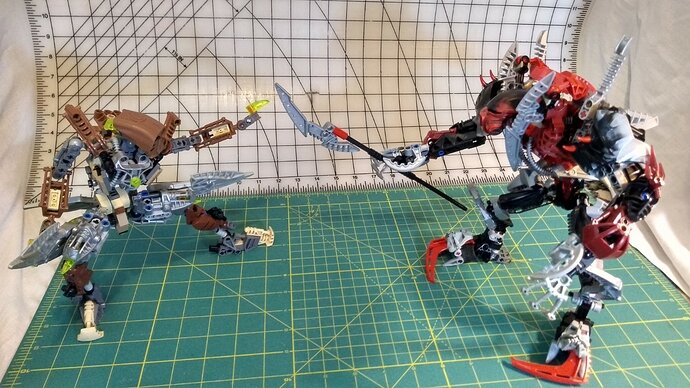 Name: Gharedix
Kanohi: Mask of Emulation
Weapons: Sharp Claws and custom shadow staff, based on the shadow spear, it allows him to channel his shadow powers through it, as well as being stabby.
Abilities: Shadow Hand, Kraata Powers; Darkness, Cyclone, Gravity, Electricity, Chain Lightning, Ice Resistance.

In this AU Makuta can only access 6 Kraata Powers, due to an weapon their enemies created limiting the powers they could access.

Well, I hope you guys like the MOC.
C&C appreciated

This moc feels just like a g1 design. Great job

Looks nice! I can’t help but feel the removal of Mata red would help it feel a bit more cohesive though. The design itself has a lot going on and the use of both reds kind of makes it look messy at first even though its not. The design itself is really cool though.

Thank you.
I can agree with that. Sadly I believe not all the pieces I used have a dark red version. Though if there are such pieces then I did not know of them.
One thing to note it looks a whole lot more messy on camera then IRL. IRL I’d argue the mata red helps add to the detail, but in pictures it doesn’t show as well.

I love everything except the big red claw on the foot, kinda ruins the flow of the MOC.

Otherwise, perfectly old-school styled, and I love it! Nice work!

Thanks, I’ll see what I can do to “fix” the flow to the MOC. as that does mean changing the feet a bit.

Even though it kinda looks messy in some places, I guess it’s an OK MOC.

I’m not sure why, but he reminds me of the Fallen from Transformers, which in this case is a good thing. Interesting flow and build!

That’s fair, to each their own.
TBH, I tend to prefer MOCs that use more g1 pieces than ccbs or system, probably that’s what I grew up with in the community back then. As such I can say there’s a definite area between detail and no detail, between messy and not messy. This guy is definitely on the more messy side, as such I can agree with you.

Possibly swap the red blades on the feet with black ones, and swap the silver bohrok teeth with metru red to keep some red on the feet. I really dig the wonky shaping going on, mainly in the legs.

So I guess he likes to High Five a lot then.

Nice moc by the way, I can’t really say much since I’m not an expert with G1 but I can say that it looks good and that you should keep it up!

This is the first MOC I’ve seen in a long time that makes me go “What in the world am I looking at?”

The head is incredibly small compared to the shaping of the torso and just how bulky it’s meant to be interpreted as. The blades running down the torso meet just above the pelvis, but two of the fins from the '08 line are sticking off the side of the torso behind the hips, which doesn’t directly inhibit movement but I can’t tell what it is I’m looking at.

Everything about the clunky and cobbled arms indicates a large, powerful figure, but the tapered waist and the tiny head completely detracts fro that. There are also two more blades sticking out the backs of his shoulderblades(pun unintended), and two more rising off the shoulder ligaments. And two more hooked blades coming off his shins! None of which are in a good or meaningful position to use. Again, I can’t tell what it is I’m looking at.

The legs are built off a fictionalized reptilian anatomy, with the higher ankle to create a double-jointed knee. This in itself is fine, but the feet - what in the world are those feet? I can’t even properly describe them as part of an appendage. And probably as an insult to the fact that he’s lathered with weapons, he ironically has the smallest spear imaginable.

Overall, I tink I can finally tell what I’m looking at - an attempt at the many official LEGO combo model designs (with a little Dark Hunters splashed in), none of which work together, and the end result is… Not necessarily bad at all, a lot of the individual section work, but you really need to narrow down what character you’re trying to make. A big one? rebuild the hips and legs to match the scale, find a bigger head or build your own, and give him a better weapon. A blades-is-my-clothing character? rebuild the torso and arms, add more blades in meaningful or cohesive spots, and give him a better weapon. A Makuta? focus on giving him more Makuta-esqe features such as wings, a slim but imposing design, darker colours, and give him a better weapon.

If this was one part it would’ve been a nice WIP (which you couldn’t post on the boards anyway, an arm MOC as a WIP would’ve been rightfully perceived as a joke topic) but it really needs some work… After you’ve decided what it is you’re building.

With the makuta part, I was trying to go for a more imposing character and took inspiration from Teridax’s shadow titan form, as it didn’t exactly have wings. There’s also Miserix and Krika who don’t have wings, so I don’t see an exact reason to give him wings.

Also, thanks for the suggestions on how to improve the character.