The New Hawkhood Dilemma: Conflicts of Good and Evil

Hmm, does Hawkhood have any sort of powered criminal containment facility?

It should. One controlled by the city, if you know what I mean.

right in the heart of the city, why not

Ooh, just off the coast?

twould be interesting if Elias made trips there occasionally

that would be neat

@Runa this wasn’t in Matthew’s bio, but can I say that he carries around some way to bind up criminals? A sort of handcuff, though maybe a bit more resistant given who they’re intended for.

Think I’m going to be completely changing my character. Don’t worry not just a random retcon, there’ll be story.

Appearance: He stands about 6’2, is slim but muscular with black hair and blue eyes. 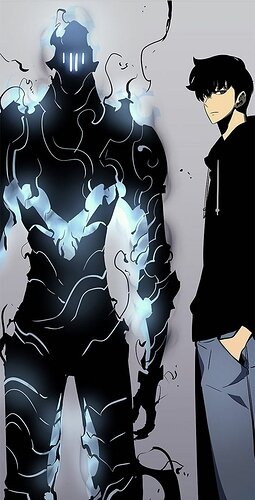 [details=The Phantom Sword]The Phantom sword is a broad great sword that is almost as long as Igiris himself. It connects and bonds with his body, almost becoming an extension of himself.

At first glance, it appears to be a normal greatsword, but the purple aura around it begs the difference as it has a few striking attacks, like slashing it horizontally or vertically to unleash a wave of purple energy.

[details=Bloodwird]Bloodwird is a sword that he uses with his dual-wielding skill. It doesn’t have the destructive capabilities of the Phantom Sword, however, what it does have is a healing factor that heals the user, which happens to be Igiris.

The healing factor duration is one post and takes three to reload so to speak. Also one of its abilities is that it’s very lightweight and because of it when he uses it it’s more like a blur than anything, it may be too late when you spot it, depending on how fast your reflexes are.

Why it may be so fast is because of its ability over the wind, though if Igiris wanted to create a hurricane he would have to wait for about five posts to create one that has enough power behind it and ten posts to recharge it.

Though the ability to use wind has no limit so far, the limits are with whirlwinds that take 10 posts to channel 15 to recharge.

[details=Igiris]Igiris: No one knows where he comes from and sometimes even he forgets where he originally came from. His memories are a blur and he can’t access them, not even if he wanted to.

Not that long ago, Igiris bonded with Abe. He is not a parasite and not a symbiote that uses Abe’s body for his gains. Whenever Abe needs help he will ■■■■■■■■■■ into Igiris, the Flying Fighting KnightWalker.

Igiris is a powerful being but even he has his limits and even so doesn’t always have full control of his incredible powers because he may tend to lose control when using them.

When Igiris is cleared minded the energy that flows through him is light blue and whenever enraged or in battle it turns purple and the more enraged he gets the darker the purple gets.[/details]

Personality: Abe is someone that looks out to himself and he’ll only go out of his way to protect or do something if one of his loved ones are in danger.

He may seem selfish because he doesn’t always use his powers for the greater good but he also knows that if he sticks himself up there in the spotlight, his said loved ones may even get in danger.

He is mostly friendly when you crack him up, but he tends to keep things to himself and works alone. When he likes something he will totally express himself as well as the things he doesn’t like and if he feels like it, sometimes, he’ll just ignore ya.

Bio: Abe graduate High School with ease then he went on with College and he graduated that one as well and was about to go to Massachusetts Institute of Technology, aka MIT. He was very bright in the head and so he had a chance to fulfill his dream in possibly creating a full dive virtual world MMORPG.

Though that wasn’t the case because Abe got infested with Igiris, a being where he doesn’t remember where he came from. Eventually, they came to understand each other and Abe soon learned that this Igiris has powers, so he used them once when a few thugs decided to rob a bank.

He saw the incredible power Igiris had and he knew that he couldn’t misuse this power that has been given to him. Though he doesn’t want to start a crusade either, so every once in a while to give some playtime for Igiris he lets him out to play, aka take thugs out.

Their relationship grew closer and they even became like brothers, in a way Igiris reminded Abe of his brother, who has died due to a heart condition. Now more than ever Igiris is on a quest to remember his memories and to find the reason why he came here in the first place and from where he came from even.

spreads corruption within the purest of souls.

@Runa I mean, I think that’s pretty self explanatory. If you get caught into this blast wave of his, if not treated you are playing with the risk of having your body corrupted. Think of it like I don’t know, Dark Energon or something like Transformers, if you know what I mean. Like it turns your thoughts and mindset that of a killer let’s say, someone dark with no emotion, though you’ll have to get a massive exposure from it to even possibly become a mindless killer.

Not from a GM perspective at all, but I’m terrified for the majority of New Hawkhood if a guy who can create hurricanes shows up. City’s screwed.

Well, I think I’ve fairly distributed the idea of it taking 10 posts to channel and 20 to recharge. Of course, if it’s too op I could get rid of it. Not tryna create an unbalance on this RP.

My main concern is that even if it took 1500 posts to charge, that’s still a hurricane in a port city. Hurricanes destroy like literally everything and so do tornadoes. New Hawkhood would be an absolute wreck if one of those went off there.

I’m not unreasonable. So I’m sure Runa will come with something out.

I’m not sure I like the idea of you being able to change someone else’s character’s personality like that.

And hurricanes seem a little much. Whirlwind and the like? Sure. But I’d rather something that destroys a few blocks, not entire cities.

So you want for the infection thing to go and hurricane and tornado, correct?

Infection thing to go, hurricanes and tornadoes toned down. Other than that, I think he seems fine.