The Science of the Spherus Magna System

Hi everyone, this is my first post as a TTV member!

Over the past 2 years I have been slowly working on a scientific investigation of the Spherus Magna Planetary System from BIONICLE. Do you want to know the strength of the surface gravity on Bara Magna? The orbital distance of the Red Star? Take a look at the below links to find out the answers to these and way more questions you probably never asked. I’ve spent so long on this and poured so much time and effort into it and I am so proud of the result. I hope any of you that are interested will check it out - if you get even a tenth of the enjoyment out of it that I did making it, I think it will be time well spent.

I’ve got two versions of the document linked below, the summary version (which just contains my results without any of the workings out or maths behind it) and the full version (that contains all 53 pages of my full methodology):

Here is a preview of some of my results - a fully to scale map of the system! 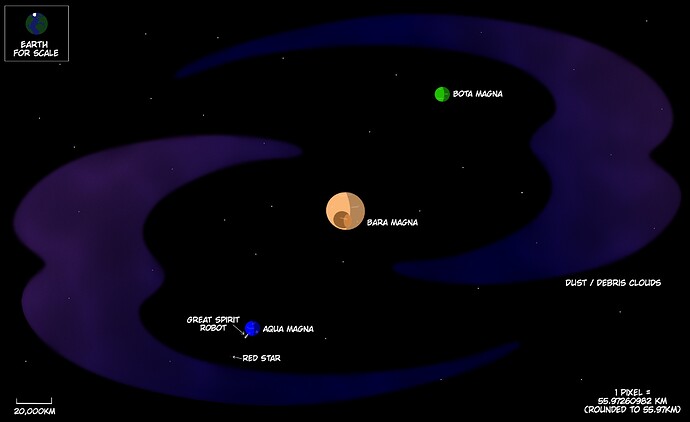 What do you think?

(1) Welcome to the boards, mate
(2) hmmm, this seems about accurate. nice job

This is what I’ve always needed! Thanks for this, @RahiWatching ! This will really help on my stories!

Free fall acceleration of 14.5 m/s^2 is rough though, from biological perspective. And from perspective of constant flips, so loved by many Bionicle characters.

But for the evidence canon gave us, this is indeed great.

Admittedly, I only looked at the Summary Paper, but I noticed one problem with the scaling. Canonically, the Great Spirit Robot is 40,000,000 feet tall-just shy of Earth’s diameter. But you have it portrayed as WAY smaller than the Earth.

Yes, that’s correct, however in the full paper I go into why the GSR here is not scaled at the 40 million feet size as per canon.

The short version is that if I used the canon scaling then the numbers arrived at for the rest of the system were absurdly large (Spherus Magna being several times larger than Jupiter!) so as part of my initial assumptions I used the smaller scale GSR as shown as part of the original concept art by Christian Faber.

Basically, my version of the system is an attempt to create a realistic version of the Spherus Magna system, compromising where needed with what is strictly “canon”.

To be honest, I probably should have put a bit more of that background into the summary paper, as it can be a bit confusing without the wider context

This is some amazing work @RahiWatching !
This is exactly the kind of analysis I like. I enjoyed reading the paper.
However, I am still dissapointed that you chose not to go with the actual GSR size. I really wanted to know those real numbers and how ridiculously large they would be.
Would you consider a sequel detailing that process and having most of the equivalent results included?