Hello, everyone! Welcome to my first (and possibly only) entry into TTV’s canonization contests. I’m very proud of these three builds, and I hope you like them as well!

All of these builds aim to be 100% compatible with the 2004-5 Metru building style, using only unpainted pieces that are freely available on Bricklink. My first priority is ease of building for other fans, so that anyone can easily get these characters on their shelf! I support the democratization of canon characters, which is why I never resort to rare pieces or System greebling in my MOCs. 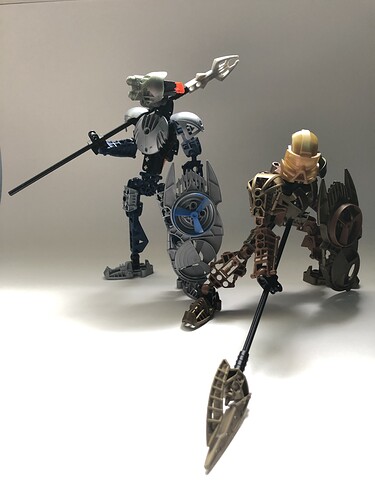 Some of the more eagle-eyed among you might notice a friction assembly on each Toa’s back that also includes a decorative Bohrok eye. This assembly is not an integral part of the model! Since it was not present on either Norik or Iruini’s canon releases, I give my full permission for them to be considered non-canon additions to the sets. I do, however, find them to be necessary additions to Metru builds for poseability, as they allow for a Toa’s arms to be held at a stable position without swinging loosely.

As for the contest-mandated clarifications… I do give my consent for my Toa’s masks, spear points, and colors to be altered by artists. HOWEVER, I do not give consent for Gaaki to be given golden armor, as she would then have the colors of a Toa of Psionics. EDIT: The same applies to Kualus and golden armor. (Also, although not a requirement, I’d prefer if the artist kept Pouks’ mask shape as that of a Kaukau, becuase I love the contrast between his element and the power :P)

So! Without further adieu…

I envisioned Gaaki as a regal, postured type of Toa, so I tried to build her tall and thin to reflect her personality. I gave her Iruini’s long legs to elevate her above other Toa, and I shortened the width of her shoulders compared to a standard Metru build to give her a more graceful look. I chose her color as silver to represent similarities to Norik, the other member of the team who appears to have a dedication to justice first. Her shield, chest armor, and spear point all feature the aquatic flipper pattern that characterized Gahlok, Gahlok-Kal, and Guurahk, so I’m happy to say that she fits right in alongside them! 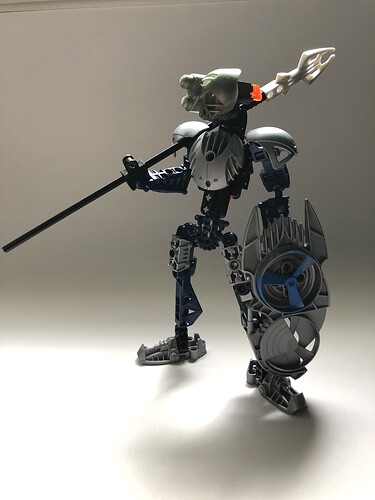 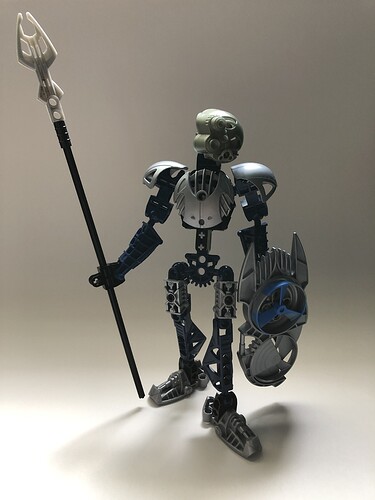 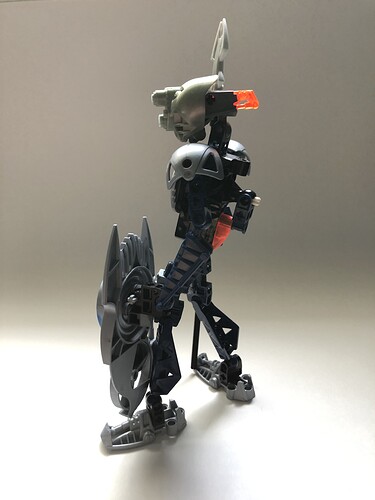 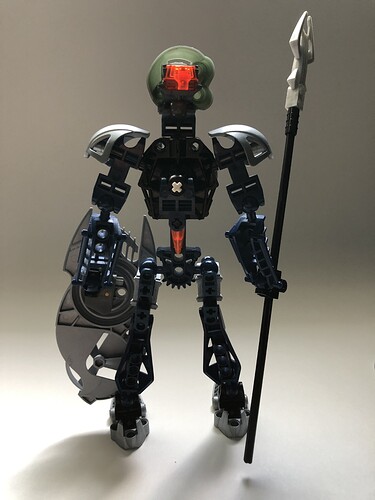 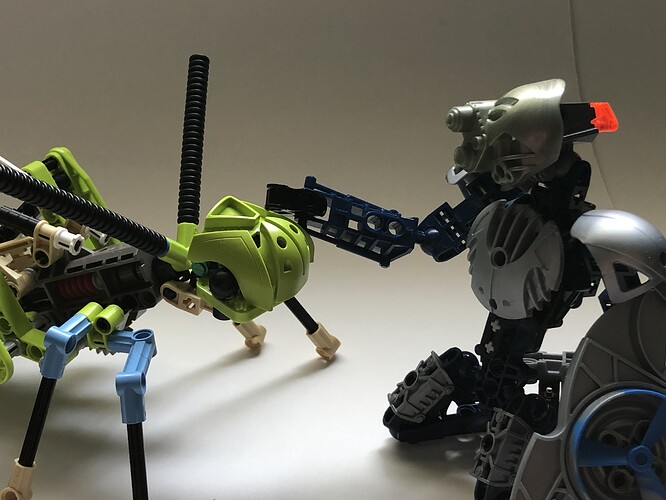 Pouks, in opposition to Gaaki, has always struck me as a gritty, rough-and-tumble type of Toa, with little regard for the dangers of a Toa’s life. As a result, I decided to make his appearance imposing and down-to-earth, giving him short, stocky legs, and maintaining the standard Metru build’s ultra-wide shoulders. The choice of his chest armor and spear point were less nuanced than Gaaki’s, as there are simply too few options to choose from without painting pieces. However, despite the fact that I had to redo the torso assembly pretty heavily to accommodate Takanuva’s chestplate, I think it turned out well in the end. 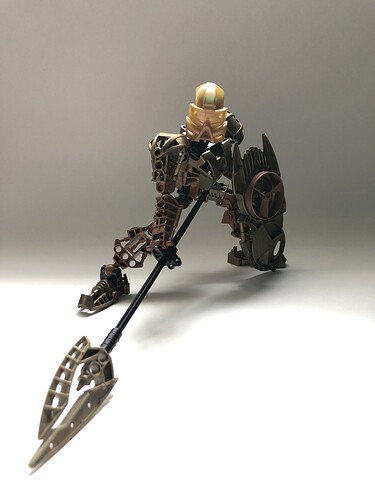 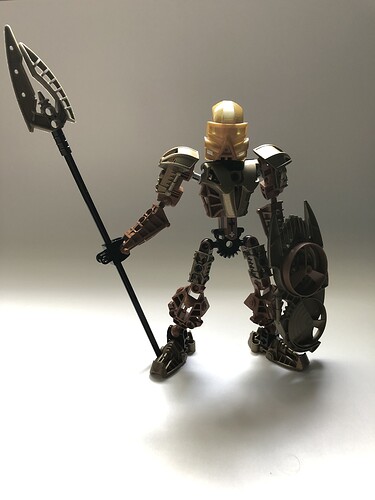 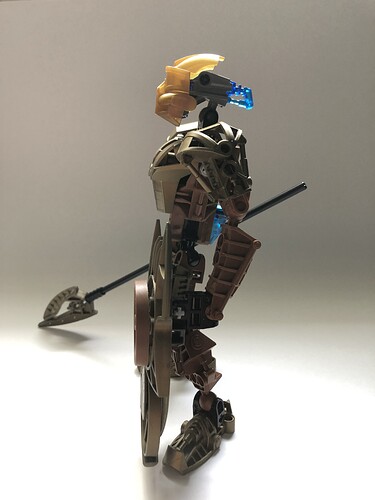 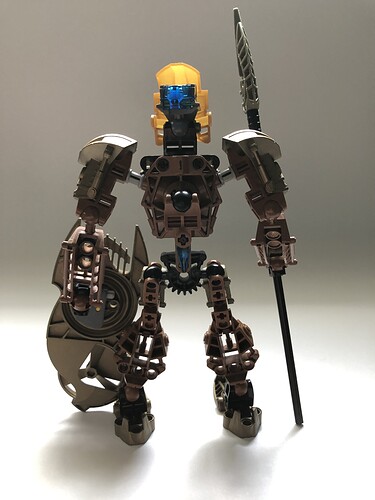 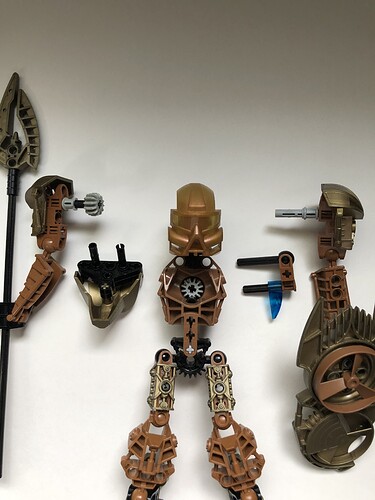 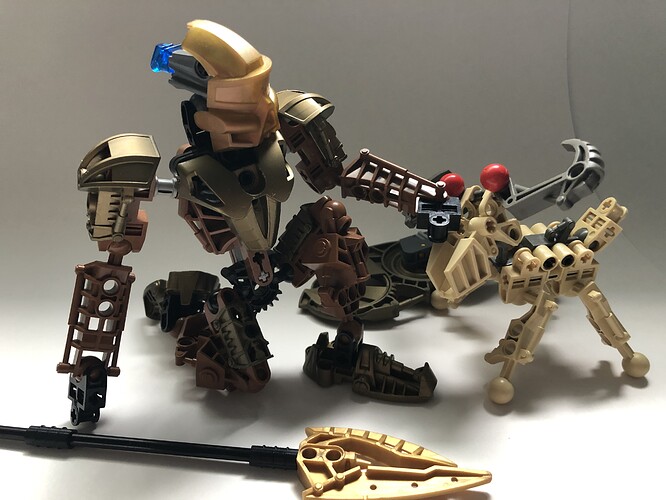 Pardon the late entry! I’ve been convinced to submit my Kualus after all, even though his metallic armor has proven to be a nuisance. I was unable to find any gunmetal variants for his speartip, shield, or shin armor; although one of my friends was kind enough to paint his shield. Even so, I don’t want to subject fans to unnecessary painting, so if this entry wins, I beseech the artists to try and make Kualus a color that can be easily built without paint! 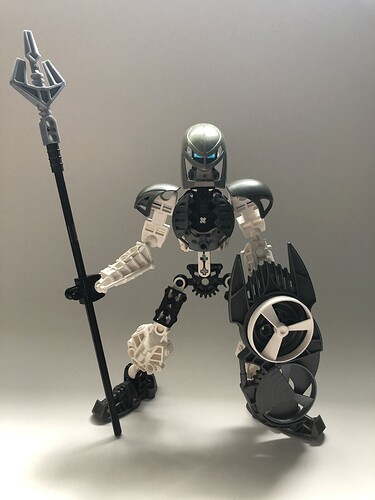 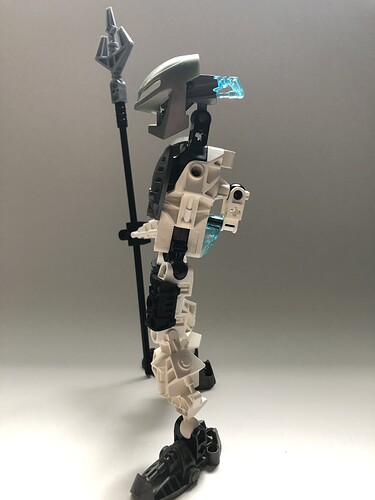 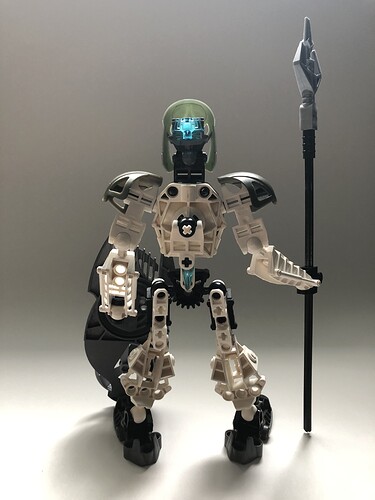 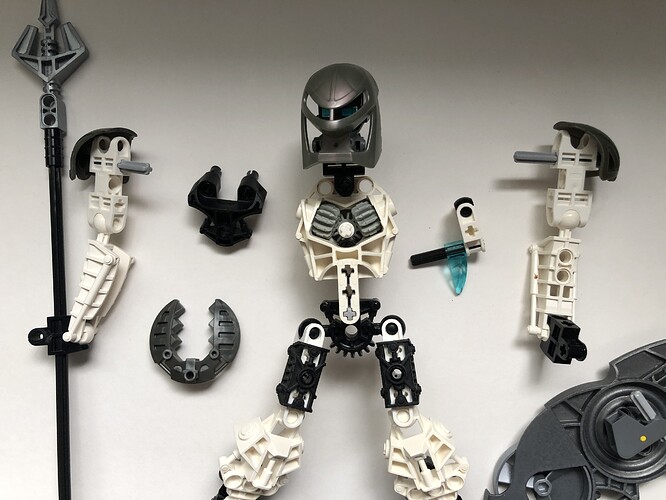 Vibin’ with a Lava Hawk: 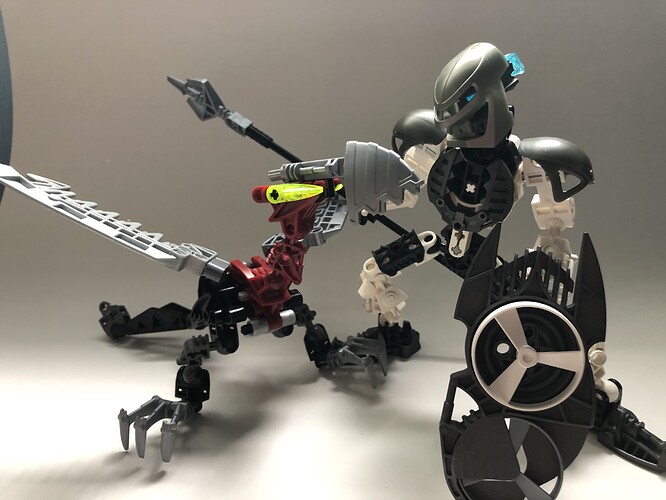 And finally, some shots for fun:

The gang all together: 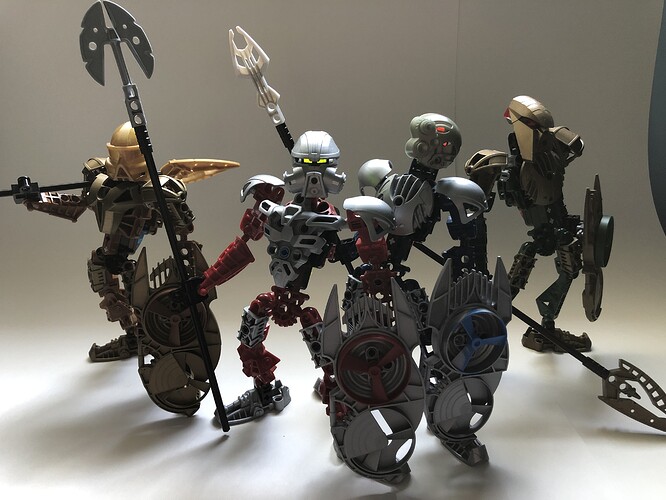 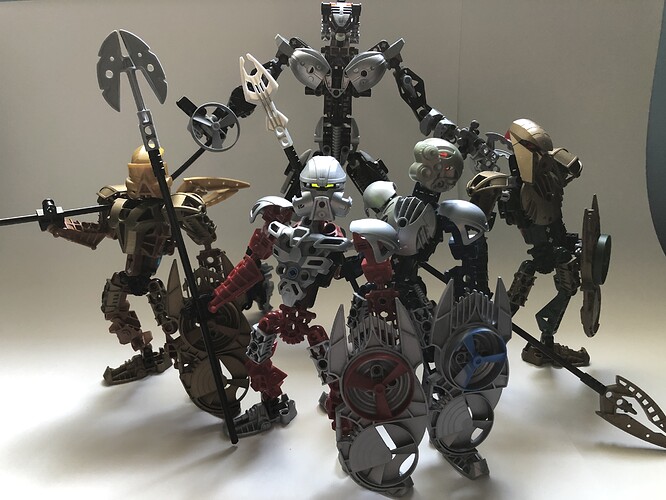 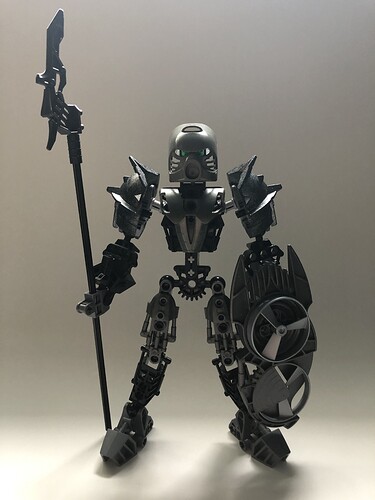 IMG_40863024×4032 1.73 MB
(Bomonga originally had an RSG Kanohi Awai, but given that RSG has not given its permission to use their masks in the contests, I couldn’t enter it. And sadly, no other mask matches up with the shoulders quite as well…) 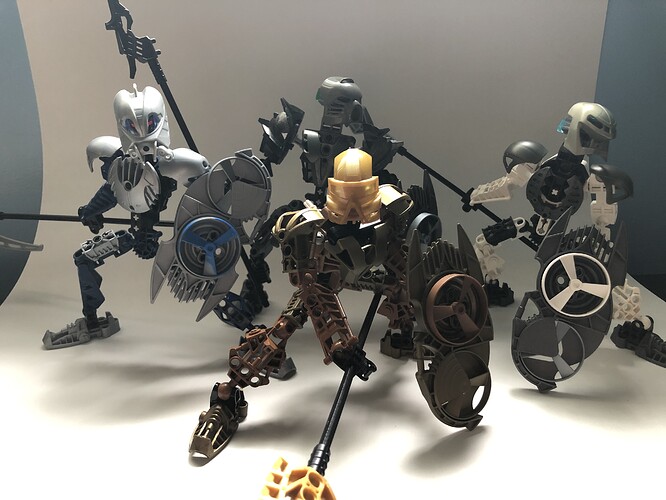 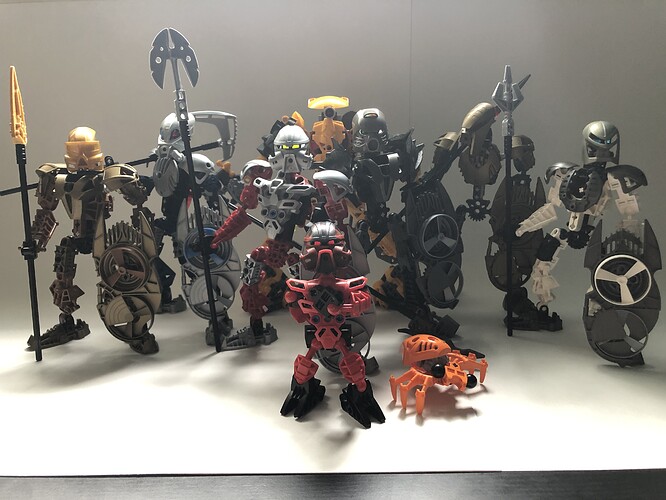 That about does it for this entry. Let me know how you think I did, and I hope to see you all in the art contest!

I do not give consent for Gaaki to be given golden armor, as she would then have the colors of a Toa of Psionics.

Love the MOCs too, Kaukau looks surprisingly well on Pouks!

These are cool and very interesting.

And I agree, I’m surprised how well the Kaukau works on him!

Don’t give up on Kualus and Bomonga, they’re good builds. If you are worried about color, then you could try digitally coloring Kualus. And for Bomonga’s mask, just give consent for it to be changed, an artist might hold the same opinion as you and use a more fitting design for a mask. Good luck anyways.

Simple and effective! I actually really like the Mata masks you chose for each, they almost hint at the mask powers despite being modeled after others. With some custom spear tips I could easily see these as the canon Gaaki and Pouks.

And I really think you should submit that Bomonga! If you let the artist have their way with the mask they’ll probably design something that fits well with the rest of his aesthetic. The armor you chose looks appropriately chunky and gives him a great silhouette, and I like that he isn’t just a stock Toa of Earth. Good stuff!

These are great my dude. Will most assuredly vote for them given their closeness to the official Hagah sets

And yeah, you don’t have much to lose by entering the other two. Though Bomonga in his current form looks a bit too distinct from the others with those pauldrons, thighs and feet. I guess that’s because you didn’t have the parts to spare. I know those gunmetal parts are pretty rare.