The Toa Mata of Secondary Elements

What if the Toa Mata encompassed all elements?

I’ve always liked this question, so here are the hypothetical Toa Mata for all secondary elements, barring Light and Shadow. I even made them cute little Nuva symbols. I’ve also included a certain Toa’s mask…

The leader of his Toa team, Feri is a highly proactive Toa of Iron and modifies himself regularly in order to stay one step ahead of his enemies. In addition, Feri tinkers in his off time, creating upgrades for his teammates. A bureaucrat by nature, Feri expects an unreachable amount of dedication from his cohorts, and never takes no for an answer, even when he really should.

Feri wears a custom mask of mine, a revamped Mask of Biomechanics with a scope, made with less ridges and a less Piraka-esque demeanor. This is also my favorite of the bunch. 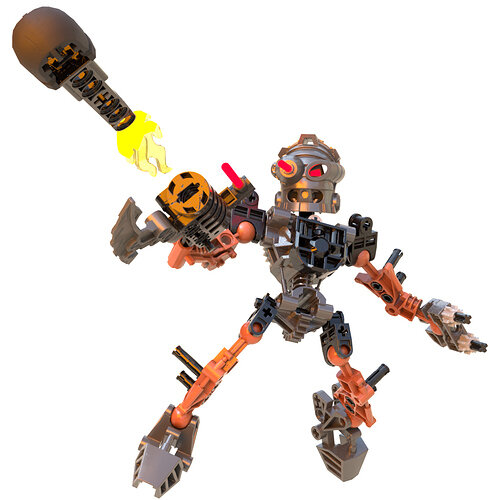 Supoka’s original Toa tool was a crossbow that shot protodermis slag, which Supoka found pitifully small. So, he commissioned the team tinkerer, Feri, to upgrade him to wield 2 gattling plasma cannons as well as a slag container. Why? Because Supoka is, at heart, a reckless pyromaniac. One that means well, of course, but a pyromaniac nonetheless. It’s a miracle (or dumb luck) that Supoka hasn’t injured an innocent. Even so, it’s hard to get mad at Supoka’s friendly nature, unless you’re Bohu, whose flowers get charred every week.

Supoka is my favorite character wise. If you built him IRL his shoulders would pop off instantly. His mask is an unaquatic Faxon made by KhingK. 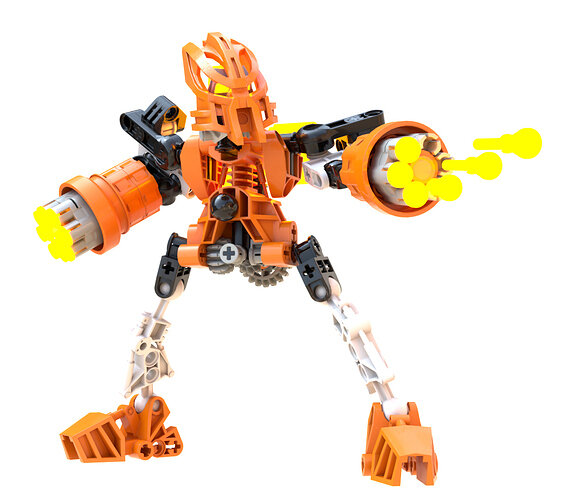 Voliku is constantly building up energy via her shoulder-mounted generators, and though it’s not lethal, Voliku tends to want to release this energy— sometimes by smashing heads, but usually by not shutting up. She’s equally charismatic as she is volatile and performs dazzling electric shows in her off time, in addition to yapping her mouth all day.

Voliku was originally supposed to be a wizard, but someone already beat me to the punch. Now she’s based slightly on the Transformer Kaon, who transforms into an electric chair. Her mask is the Mask of Adaptation made by KhingK. 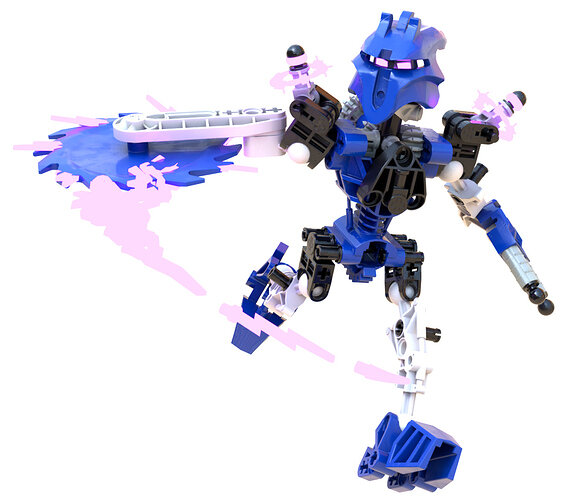 Attracted to pretty much any new hobby or talent, Falo is a jack of all trades, from a part time physicist to amateur flute player. He’s always one to try, and always one to go a bit overboard. Because at heart, Falo doesn’t feel like he attracts anyone, and believes that he’s not interesting enough to be a hero. Though none of his ideas ever work, his integrity and willpower surely will pay off one day.

Magnetism as an element is tricky since it’s such a bland colorscheme and there isn’t really any design motif that screams magnetism other than making him a giant magnet. His mask is the Mask of Intangibility, made by KhingK, modified to have 2 scopes. 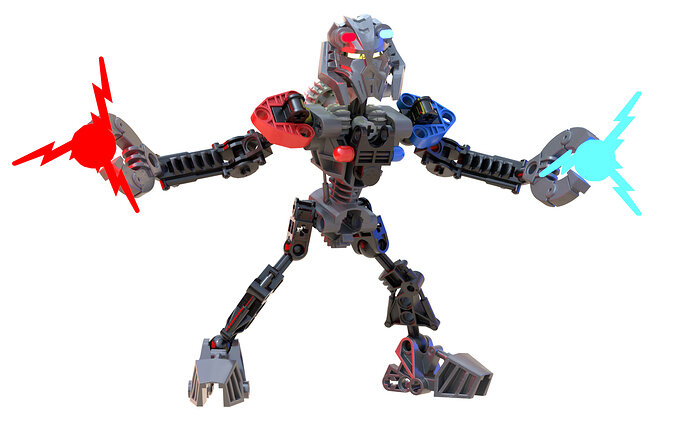 The brains of the team, Cerahu can assess a situation quickly, with a good instinct and a habit of correcting others. However, her control over her element is weaker than an average Toa of Psionics, requiring her to wield two flails to focus her powers (proficient Toa of Psionics require no tools whatsoever). Her shaky battle skills has left her at odds with her team leader, Feri, who prioritizes matter over mind.

Psionics is also a hard element to do since their power/motif is not easy to express visually. Her mask is my design: the Mask of Rebounding. 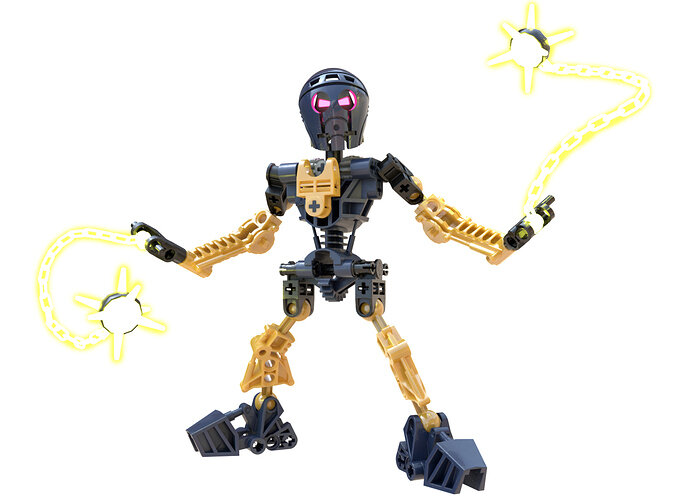 Somehow relaxed at all times, no matter the situation, this Toa of Plantlife enjoys meditating and would rather explore his island than fight its evils. This behavior may be seen as lazy by his teammates, though Bohu sees it as his way of appreciating the grandeur that the Great Spirit has created.

Bohu’s body is constructed differently from other Toa Mata — his gearbox is reoriented upwardsso that when you spin his gears a tree spins and fans out, serving as a sort of hovering rotor. His mask is the Mask of Conjuring made by KhingK. 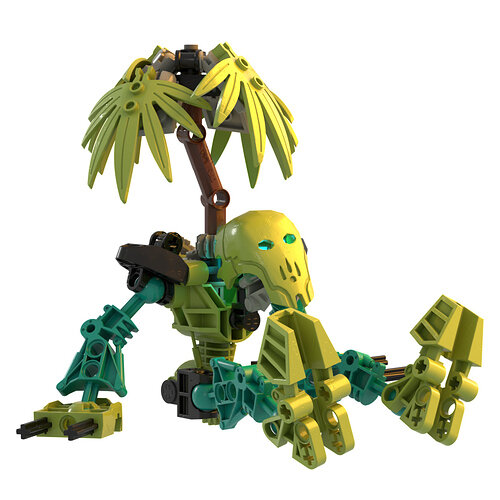 Damage sutained upon the crash landing of his canister has made Deka deaf. Deka has a pet Yiba wyvern named Piki, whom he has a telepathic connection with. Aside from recon missions, Piki also acts as one of Deka’s only friends that he regularly communicates with, which brings him great comfort. Though he’s a bit of a loner, his teammates respect Deka’s gentle nature.

Sonics is monochromatic and rather boring, so I spruced it up by adding a touch of red via his pet. His mask is the Mask of Voidstepping by Galva. 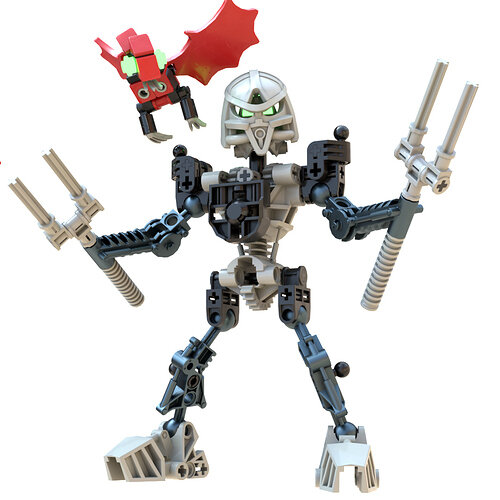 Baria has big aspirations, most of which fly over the heads of his contemporaries. Baria wishes to explore the universe at large, when he finally masters his Gravity powers. Make no mistake, though; this Toa of Gravity doesn’t always have his head in the clouds, and will gladly smash something when asked politely. Interestingly, Baria has shifted nearly all of his gravitational force into his collossal mace launcher, leaving him as a near weightless Toa with a massive punch.

The mace part is inspired by Megaman’s Knight Man. His mace launcher was initially designed to actually fire a spiked ball, but it looked terribly clunky, so it only shoots the ball in the land of renders. I wanted to give him a sort of futuristic/space vibe, ergo the neon lighting. His mask is the Mask of Healing by Galva_. The spike ball is taken from the pufferfish in the Ninjago City set. 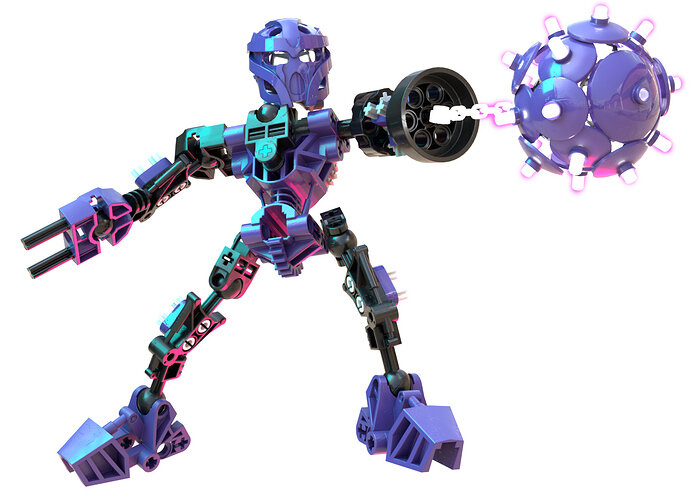 This was a fun project to work on, since I love the Toa Mata. Enjoy!

These are some truly beautifel renders. I like how the Toa of Plantlife literally has a palm tree growing out of his back.

it’s hard to get mad at Supoka’s friendly nature, unless you’re Bohu

relaxed at all times, no matter the situation

Hmm, I see. So is Bohu the quiet-angry type that just stares menacingly then?

I’m loving Bohu, and the fact that he literally has a tree growing on him.

These are really cool - the Nuva symbols are a nice touch. I especially like the magnetism design, using the Blue-and-Red colour scheme in a nod to polarity. Bohu has a very clever gearbox design, that feels in line with the “simple distinctions” of the Toa in '01.

I like the personas - they feel colourful enough to be a believable and interesting team, while not hugely stereotypical, either. Mask choices are all great and make sense for both powers and personalities - although I question the Faxon for someone so trigger-happy. Also never been a fan of fan-made mask powers when there are so many cool expanded universe masks we have yet to see, but that’s just a personal thing on my part.

Now she’s based slightly on the Transformer Kaon, who transforms into an electric chair.

lolwhat. Just when I thought transformers couldn’t get any more absurd…

Hmm, I see. So is Bohu the quiet-angry type that just stares menacingly then?

I see it more like nothing makes Bohu angry, except for Supoka.

EDIT: I just reread your question and realized that I misunderstood it

lolwhat. Just when I thought transformers couldn’t get any more absurd…

Haha, that was my same reaction too. Kaon is part of a black-ops Decepticon group that tortures traitors, and he uh… electrocutes people.

Some of what you’ve done here is clipping but I can forgive it, they look amazing! Excellent work!

These are all very nicely done renders!

However, maybe it’s just the lighting, but the toa of Psionics doesn’t look blue and gold, it looks more grey and yellow.

Now this is pretty outstanding!

These are extremely unique and appealing!

I can definitely imagine them all featuring in their own story together. For some reason my mind goes in a West Coast Avengers kind of direction. Maybe they were meant to be launched with the Toa Mata, but an error caused them to be sent to some completely different island far away to have their own adventures.

These have a lot more personality and detail than the Toa Mata, and I think they work way better as character designs even if the make the OGs look plain by comparison. You mentioned some custom parts in here; is there anywhere I can download them? And do you have any story behind that Gaahu in the first pic?

Some of what you’ve done here is clipping but I can forgive it, they look amazing! Excellent work!

The Toa Mata are pretty limited in articulation so I took some clipping liberties and committed some heresy. I try not to make it too egregious.

However, maybe it’s just the lighting, but the toa of Psionics doesn’t look blue and gold, it looks more grey and yellow.

She’s navy blue and pearl gold on my screen. However, stud.io makes pearl colored parts noticeably translucent, so they’ve probably absorbed a bit of the yellow light that her chains emit. The blue probably got desaturated during the render for whatever reason.

I can definitely imagine them all featuring in their own story together. For some reason my mind goes in a West Coast Avengers kind of direction. Maybe they were meant to be launched with the Toa Mata, but an error caused them to be sent to some completely different island far away to have their own adventures.

That’s a great idea. I myself don’t have any in-story reason as to how these guys can exist, but this works well. Kudos!

You mentioned some custom parts in here; is there anywhere I can download them? And do you have any story behind that Gaahu in the first pic?

If you’re referring to parts made by KhingK or Galva_, you can download their custom parts packs here and here. As for my parts, I’m not quite ready to release them publicly until they’re 3D print ready, though ETA is “soon.” There isn’t a big story behind that Gaaha, just a sneak peak for a certain Toa to come.

Cool MOCS! I’m getting some Hero Factory vibes as well, which is a good thing! I’ve been a fan of HF since the early days of the CCBS

Would have immediately bought Iron, Plasma, Plantlife and Gravity if they had ever existed as sets in a toy store

but they are all magnificent!!

I love concept of BOHU and FALU!

This has to be one of my favorite topics on the boards.