The True Legend of Chima

And now, for something completely different to floods of Hagah!

I’m writing a whole in-depth analysis of the story as a whole if anyone’s into that kind of thing. I’ll probably make a topic when I’ve finished.

The True Legend of Chima

I’ve been working on this since mid-2019, so I’m very glad for it to be finally finished. There’s a lot to read through, but I hope those of you who were intrigued will enjoy at as much as I enjoyed making it.
Keep in mind this is a very extreme take on the story.

Say what you will about the theme but it’s definitely left it’s mark as one of the more memorable themes from the 2010s of LEGO. I’ve never really read any fan adaptation of the material but I’ll be sure to check this out when I get the time!

Anyway you could tie in the way that crominus framed Lavertus for a crime and got away with it?

I actually forgot about that. Looking at it now, the Lions’ legal system as a whole was really weird. We only ever see two crimes committed, yet both punishments are the same, and seem incredibly weird punishments at that.

Instead of just receiving a prison sentence or something, the Lions instead opt to exile their own to an area renowned for being extremely dangerous and deadly. It seems to be a way of doing executions without actually having to look bad to outsiders, it’s like “Oh, don’t worry, we’re just exiling him” when in reality they’ve just condemned the guy to death, strangely fitting for how cruel and corrupt the Government seems

But all this is besides the point that Crominus got away with it. I mean, the Lions don’t even hold a court trial or anything! They just believe what they see on the surface and go like “yep, that seems fine. No mistakes here”.

that was incredible. thank you for making this.

Haven’t gotten nearly into this, but it sounds interesting and (potentially) well thought-through. Chima was the embodiment of what “wasted potential” looks like.

An involuntary smile appeared on my face when I read Laval’s character description.

EDIT: So the biggest logical falacy was definitely the math going into the Lion’s Chi reserves - it makes the (unjustified) assumption that Chi is produced at a consistent rate, when it might actually function more like a geyser and release it in periodic bursts. It’s still pretty hard to reconcile the math though, unless this happens really really infrequently.

Definitely a… colourful take (the War Crimes section was an amusing read) but I’ve got to admit when I was first exposed to Chima, and was a far bit younger and less objective/critical, I still genuinely found the bad guys to be more relatable, compelling, and justified (not saying a lot, but still).

I didn’t watch anywhere near the entire show but I remember Laval being obnoxious (like, I don’t mean in the “oh, I find him annoying” sense. He was pure frustration to watch), Eris being… well, nowhere near as intelligent as her Lego.com bio suggested, and Cragger being impulsive but not really that evil. Regarding the thing with his parents, I distinctly remember also thinking “that was clearly the Lion’s fault” - it was almost Invasion From Below levels of contrived drama.

From memory, there was a peacock? Didn’t see mention of him. The second/third years also don’t get much analysis but I didn’t follow them closely anyway.

Chima could have been so cool. It was clear that the intention was to create a science-fantasy animal world where each faction had unique traits to distinguish them and valid motivations behind their actions. It’s a shame that the stark “good/evil” narrative got imposed on a template that clearly wasn’t designed for it, and that the good guys arguably got the short end of the stick, for once. Quite disappointing that such a unique (and yes, bit crazy, but that makes it fun) premise ended up like… well, this, instead.

The second/third years also don’t get much analysis but I didn’t follow them closely anyway.

I’ll very likely be making a follow-up to this focused on the later years of the theme, although admittedly I haven’t watched the entirety of season 3. Expect at least The True Legend of Chima 2: The Insect Bois soon, as I’m very pleased with the reception to this first instalment.

And, regarding the Chi, even if they only received 5 orbs per day, they’d still make 150 per month, still 5 times the amount they usually give out. Whatever the case, the Lions definitely keep more Chi than they supply to others.

Statute of Limitations ran out

I’ve readen that thing. And I like it. It is made beautifully. “extreme take” is ideal description. But I want to point a couple of things that are too exaggerated, I think.

I totally agree, that:

I really want to see parts 2 and 3, as it was very enjoyable to read.

The True Legend of Chima 2: The Insect Bois

Minor nit-picky point: when counting the eagles’ vehicles, you forgot this one: 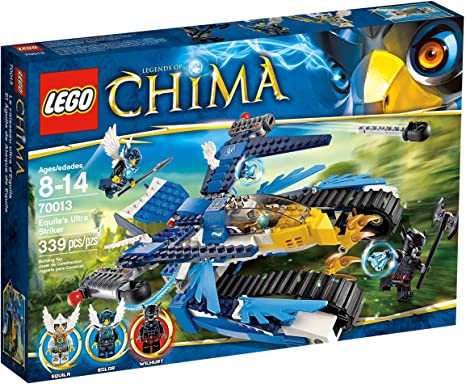 Edit: oh wait no you didn’t. Silly me.

Dear god…
@Mr.Monopoly ,you have fed the beast too much…