We don’t have another one of these right? We have one for Bionicle, Ninjago, Chima, HF… So I guess it’s pretty “official”? I mean, I have heard people talk about them before, but never this specifically and of this scale. SO yeah, this is a general topic so talk about whatever you want. So, in my opinion:

Throwbots/Slizer
The sets: Only ever got one. https://www.youtube.com/watch?v=cqbREqE46OY
I thought the sets were pretty good, considering the fact that it predated Bionicle. I don’t really know why it don’t catch on. I always wanted more sets from ebay or something, but with Bionicle G2 and System collections, I just didn’t find them priority… But I did always like Millennium. I had to read the Maze Runner series for class, and all I could think of was this. https://www.youtube.com/watch?v=cqbREqE46OY I always thought the box art was a little disturbing and creepy for some strange reason. Even Jet’s face was weird. Oh, and “canisters” were really cool.
The Story: To me, more engaging than Roboriders. I was about creatures who fought all over a planet for dominance I think, then some kind of post apocalyptic thing happened and they mutated into the summer wave. Theres a lot of theories on it and I always found it mysterious. Please post theories. I love hearing them.

Roboriders
The Sets I never actually got a set. The Boss always looked pretty cool. http://lego.wikia.com/wiki/RoboRiders?file=8516_Boss_2.jpg I obviously know why their grouped with constraction, but the sets are more TECHNIC then anything else. Umm…. I really don’t know what else to say except I feel like these sets were kinda released in more of Technic’s more um… glory days? Back when even Bionicle was considered Technic. So these sets schtick are their wheels which is alright I guess. I liked Throwbot disks better. I like Throwbots in general better.
The Story Once again, the story was never clear. Apparently there was a virus (Maze Runner vibes again) and the RoboRiders had to team up from their parts of… actually Earth I think. THey may have been humans in vehicles. Now that I think about it, I kinda would want to see these themes brought back. But anyway, the 6 of them had to combat this virus. They eventually do, only to be confronted by The Boss. Except we never learn WHO The Boss is! post logical conclusions Maybe this and Throwbots take place in the same world?

All in all, both themes were pretty cool. I wish they continued just a little longer. I’d like to see them in CCBS, probably more than people would want to see Bionicle (in CCBS) rather than in the old building system. Both themes were actually kind of dark or at least had an interesting and mysterious story. I liked Slizer more though, maybe because despite the little story it has, Roboriders has practically nothing. But at least it has a conclusion. We never knew what happened at the end of Slizer 2000. Post apocalyptic wasteland, Huge enemy that has army, one big hero, reminds me of Bionicle summer 2016…. Hmm…

I have the Lava Roborider
it’s pretty cool

To be honest I’ve always wanted some of them-to ebay I go!

I’ve got all the Slizers. I wish they lasted a little longer.

Even the 2000 sets? Which sets would you recommend?

Those were Roboriders, which I have 3 of.

I recommend all of them.

So I heard Slizer “Spark” is rare. Is this true?

So I heard Slizer “Spark” is rare. Is this true?

It was hard for me to find mine, I had to score lucky in an Ebay listing where the seller really didn’t know what they were selling.

Well, you were right! I went and looked and
http://www.ebay.com/itm/LEGO-TECHNIC-8522-SPARK-SLIZER-NUOVO-SIGILLATO-Spedizione-Gratis-Italia-/371631650254?hash=item5686f8f5ce:g:UQYAAOSwfC9XPKZC

Theory: Millennium and Blaster fight, obliterating the Slizer planet, and residue from the explosion corrupts the Roborider’s world. The boss is the Millennium/Blaster fusion and his two sides are constantly fighting over whether to encourage or stop the plague, so he sometimes acts as an advisor to the roboriders and other times as their unseen foe. Also, the Slizers, combining their formidable powers, begin to reshape the broken shards of their home.

These shards would later become a giant robot who was then stolen by some upstart aliens to house a race of beings, leaving the Slizers without a home again.

Another theory: The advertised and sold Slizers are only the defenders for their respective regions, not the entirety of their species.

I’ll be honest. I didn’t even know what Throwbots/Slizer were until this past year.

I actually have all 8 of the original Slizers. They’re all pretty cool.

A long time ago, I actually had ideas for Slizer fan fiction. It never got past planning stages though. Like most of my stories.

I was way too young to get into stuff like Slizers or Throwbots, but I did find the parts to make the Energy/Electro Slizer in a parts lot that a got a while back.

The set was pretty cool, but I’ve never had an interest in the story of both lines.

I remember seeing Throwbots/Roboriders in stores but I never got any until way later. I was more of a Rock Raiders collector at the time.

I have the power Roborider… He’s cool.
I also have the Amazon Slizer and the Aqua Slizer. They’re even cooler. 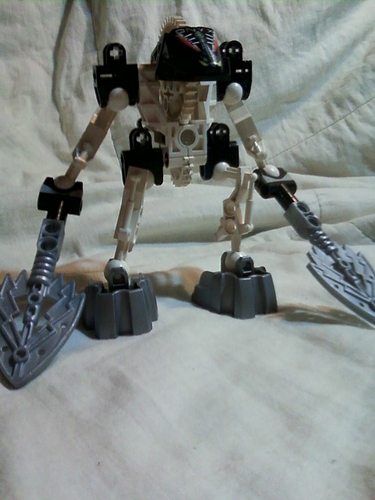 I have the rock (it’s grey and black?) roborider. It was in a box of useless junk from a Garage sale in ballina a few years ago, for 5 bucks - the whole set! along with Lego Star Wars and a couple of the maccas tohunga. Best 5 bucks I’ve ever spent.

I have the rock

One day, I will get a Slizer.