What if there was another hidden Av-Matoran on the island of Mata Nui? What if he was destined to be the second seventh Toa? What if the lava farmer Tiribomba was the chosen one? Makuta wouldn’t have played a simple game of Kolhii… 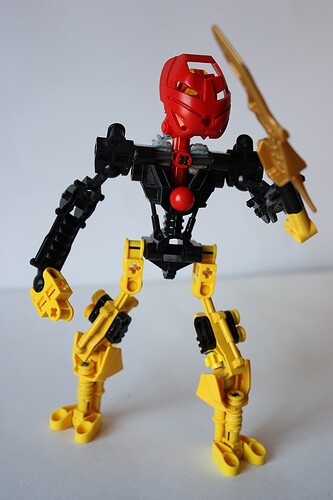 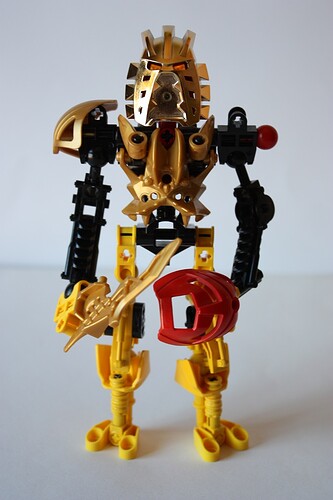 This MOC was made in 2015 for a mini-MOC challenge on the french message boards BIONIFIGS. I thought it would be fun to reuse it for the #Bionicle20ans collaborative project.
As Bionicle turns 20 this year, the Bionifigs community will celebrate these two decades of biological chronicles through all of 2021.
Each month will be dedicated to a year in the history of Bionicle - in January we focus on 2001.

Wouldn’t that make him the 8th Toa?
I like the legs! Interesting design

The legs are really interesting.

Darn Ta-Koro gets all the second 7ths

Oh my! I totally forgot about him. Really cool moc, nice leg design 10/10

I really LOVE the Torso-Armor!!

Nice work! I only heard the name Tiribomba for the very first time recently, as I only discovered the cancelled video game Legend of Mata Nui a few weeks ago.

But he is indeed one of the Matoran in Ta-Koro in that game.

But he is indeed one of the Matoran in Ta-Koro in that game.

And in MNOG II.

Tiribomba is cool and French is even cooler, so this is almost at maximum coolness. I’m not quite a fan of the golden torso armor and uneven shoulder armor, though–the former seems too sunken/ridged beneath the Avohkii and Nuva shoulder, I guess. The legs are phenomenal, though.

And in MNOG II.

Ah, so that’s how more people know him, thanks!

I was one of those people with such a slow internet connection back in the day that I could never actually get that far in MNOG, because you couldn’t save, so you had to finish it in one sitting - and each new screen took ages to load.

I’m really glad it can be downloaded as a standalone app now, because otherwise, now that internet connection and PC speed are finally reliable enough, we would have been facing the problem of the Flash player no longer working. (There was also this fan-made “Toa Designer” relying on Flash, really sad that doesn’t work anymore - if I want to create my own digital Toa now (i.e. having all the masks and pieces at my disposal), I’ll have to resort to the “Toa Creation Kit” for Garry’s Mod - which means I first have to get used to handling the game Garry’s Mod first

Wouldn’t that make him the 8th Toa?

@Takutanuva @Nogus101 @Eilrach @MooCowsRock Thank you regarding the legs, even though I don’t really get why they are so appreciated lmao. I did them because I had no other solution atm to make yellow legs/feet, but with hindsight, I find their “chicken” shape really offputting and ridiculous ahah

@Bukkey @ToaKebaka Thank you! I was actually quite satisfied with this idea.

I can totally get that for the torso armor: textures are obviously really organic and beast-like, and nothing on the rest of the MOC reminds that.
Regarding shoulder asymmetry, I find it to be something a good portion of Bionicle/LEGO AF moccists and fans doesn’t very appreciate. But personally, I find it kinda refreshing (too much symmetrical sets…)

I just liked em because they were different. Sometimes different is interesting enough to make me double take and I appreciate that