I can’t remember if this has been brought up (probably has) but if you are entering do you have to make all four, or draw all four?

First round no, second round yes.

but isn’t it the mask power that makes them immoral, and not the shape?

Given how much Toa care about their public appearance, I find it hard to believe they’d even wear the shape.

No, there’s actually a metallic white, it was used on Kurahk.

Given how much Toa care about their public appearance, I find it hard to believe they’d even wear the shape.

I think thats just a fundamental difference in the interpretation of the complexity of philosophical morality of character’s and the own perceptions of characters/factions within the world. But its been discussed before and it seems the mods are a no go with it even if Greg states at some point otherwise, for now just adhere to it I guess.

I’ve tried to break it down into digestible sections and organize my points by the rules they pertain to for your convenience, but I’ve got a lot to say.

First and foremost, I think that most of the decisions made specifically for the Hagah contest were the right ones, especially the free-for-all. As for the rules I don’t fully agree with, I can at least understand why they’re there. Others have already voiced sentiments I share about those rules so I won’t take up any more of this reply by repeating what’s already been said and argue about things that probably don’t need to change.

Instead, I want to talk about the more broad-scope rules for these canon contests.

I have expressed my dissatisfaction with the lack of clarity with some rulings to do with non-purism in the past, or with the rulings themselves and, in my opinion, the poor justifications for them and their inconsistent enforcement. I think before this next contest kicks off is the best time to revise those rules, so I want to thank you, Meso and Eljay for opening a dialogue with the community specifically for garnering feedback on how things are being run, and to suggest changes.

4f. Entries may not be modified from their physical design with digital editing software, such as Photoshop or GIMP.

8a. Cut pieces and cut stickers are not allowed.
and
8g. Replicas of the above will fall under their category of replication. (I.e: If a resin mold is made of a cut-and-glued mask, it will be considered a cut-and-glued mask and will not be permitted for use in an entry.)

8e. Painted pieces are allowed, however only monotone paint jobs are allowed. (I.e: A mask can not be painted/dyed with two colors)
and
8h. Pieces that only exist in printed varieties that have had the printing removed or have been painted are not allowed. However, if the pieces are not unique and have been released non-printed in other colors, they may have the printing removed or may be painted over.

8f. Dyed pieces are not allowed.

If you read all that; thanks! Means a ton, I hope you’re well, and if you’re Meso or Eljay, understand I’m not trying to be harsh or belittling, just thorough.

I understand the rules on non-purism are largely in place for the sake of accessibility and replicability of the models in the event that they win - and to some degree, also creating a fairer competition where the mocs are being judged on their build, not their intricate paint jobs and modifications, while also being in-part influenced by what the people behind BS01 are willing to have on their wiki… But I think these rules in particular need to be a lot more clear cut, especially since the upcoming contest is a free-for-all including all mediums, and as we’ve already seen, it’s something people are going to want to be as creative as possible with.

Ahhh so no KhingK’s mask emulation, my Pouks MOC was aesthetically made to match that mask. Anyways I’m not sure if I missed it but is the Hydraxxon mask allowed?

The mask on my artakha wasn’t dual tone?

Anyways I’m not sure if I missed it but is the Hydraxxon mask allowed?

Finally got Biopack downloaded into Stud.io (thanks in no small part to this thread), so I made a prototype Kualus to get used to using Stud.io, and I wanted to get a quick community aggregate on whether it’d be disqualified: 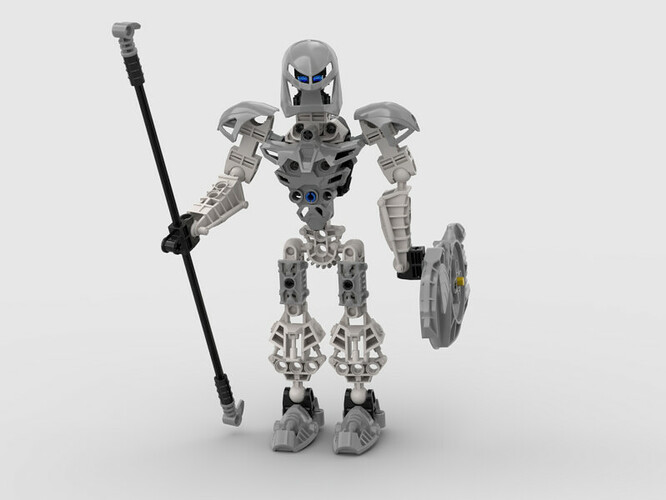 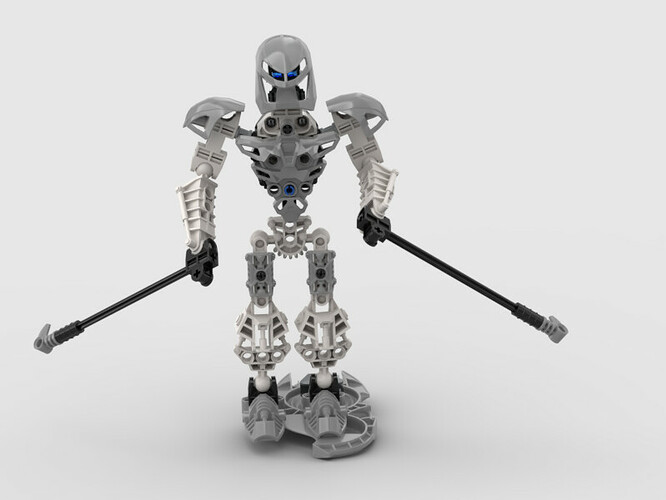 I apologize for the very basic posing in these. This is literally like the third time I’ve ever used Stud.io and I have no idea what I’m doing

In that second pic he’s supposed to be using the shield as a snowboard, and the spears as ski poles, if it’s not obvious

The second picture I can certainly say would be disqualified, as the spear is broken into two pieces and the shield isn’t being held in a hand. However, I’m only mostly certain the first picture would be as well, as the spear has two tips, and the tip(s) are too small. A confirmation on these either way would be appreciated though. (I can confirm that everything else conforms to exactly how Norik is constructed.)

Also, another question I’ve only thought of now: are the Rhotuka ripcords going to be required to be included in physical/Stud.io MOCs? 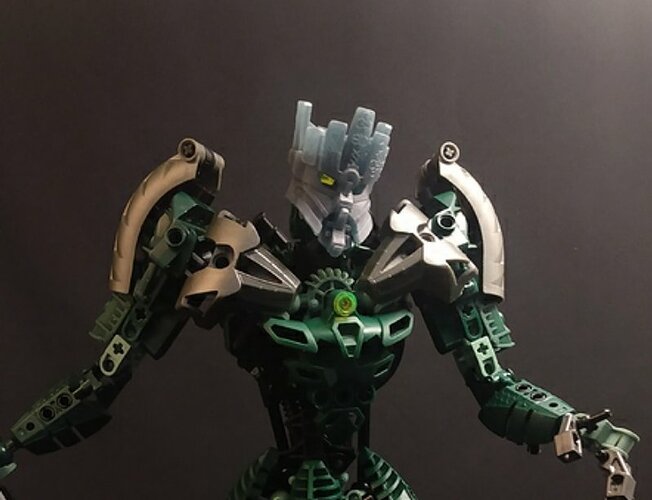 I really like the concept, and it looks a lot like my own Kualus so Im a but biased in that regard.

I gotta say though, I think the spear is a bit much. Like a REALLY cool concept and props to you for it, but we don’t have anything in the lore indicating splitting spears/dual function properties for them, so it feels like a slight over reach.

Regardless, I really enjoy the idea, props to you my guy!

the spear has two tips, and the tip(s) are too small.

This raises an interesting … point.

Anyways, (as you reel from that comedic GENIUS) that MOC raises the question of whether the butt of the spear is allowed to have small additions, such as the piece you used. It would make sense by the way “spear” has been used historically, but that said no other Hagah has it, and it would be hard to coordinate whether a specific team member has a uniquer weapon when entrants are individual.

And yes, “uniquer” is apparently a word.

The whole thing is the same translucent resin, which granted isn’t ideal for the contest either.

It just looks that way cause the top is thinner than the bottom.

That is still the Artakha of my heart.

specific team member has a uniquer weapon when entrants are individual.

To me, the fact that these weapons already have unique powers inherent to them already made them unique enough. I’d be interested to hear what others have to say as well though

but isn’t it the mask power that makes them immoral, and not the shape?

The masks are worn to honor past heroes. Though not impossible, it’s very unlikely that any “hero” would use something like the Avsa, and the fact that it’d warrant an explanation is probably enough of a hassle to warrant the rule. I don’t think it’s a necessary requirement, but it’s an understandable one.

I dunno. I mean, Matoro had a Tryna, but was still a hero. Or they could be honoring a matoran with an immoral mask, since Matoran masks don’t have powers.

I dunno. I mean, Matoro had a Tryna, but was still a hero.

I dunno. I mean, Matoro had a Tryna, but was still a hero.

I don’t see why that’s relevant. Wether he wanted to or not, he wore it, and was a hero.