I mean, theoretically, yes. In practicality, no. See, human characters in particular have a weird relationship with this franchise. They’ve been a part of the brand since day one, a way to make the autobots more relatable and approachable by having them befriend a human everyman audience surrogate. The problem that you run into is that humans are squishy and weak, particularly regular civilians, so in practise they tend to end up getting in the way of every encounter they’re involved in, and considering how often characters fight in transformers, it… becomes a problem.

Ontop of just the general pitfalls of character writing (which are slightly skewed anyway since generally in an attempt to appeal to children they come out… obnoxious, Sam and Miko meanwhile have no excuse, they’re just bad

), you have this initial inherent hurdle you have to go over, ie justifying their inclusion in the story at all beyond an initial audience surrogate, which leads to them getting a lot of screentime, which depending on the character can be anywhere from slightly irritating to single-handedly making the show unwatchable for some people.

With only transformers to work with, you essentially can just treat them as humans with extra bells and whistles now that they’re all generally on the same scale, which means you can just, like, tell a story. Will this always be a good story? Hell no, just look at those godawful machinama animations. But it’s no longer going to be dragged down by a tagged-on human subplot.

In the case of bayformers however, yes, they did make a huge mistake by putting so much focus on human characters, to the point where the actual transformers, you know, the thing people came to see, end up just being a pretty background feature that pop up now and then to spew some garbage dialogue and act like one-dimensional a-holes (then again, everyone in bayformers is a one-dimensional a-hole, but the transformers themselves are a particularly egregious example). If they tried to focus on those transformers without any humans? Yeah, that would just be a terrible movie. But I consider that more a fault of the writers for not really understanding what they were working with rather than an inherent flaw with the brand.

Bumblebee has demonstrated however that this new team is capable of actually writing the transformers as characters, so we should probably be fine.

I said before that I might consider getting a Studio Series figure or two. Well, I did. I was in Target today, and I saw Soundwave, Scavenger, and Shatter. I would’ve LOVED to get Shockwave, but, eh, I figured I couldn’t go wrong with Soundwave. And yeah, he looks pretty cool. 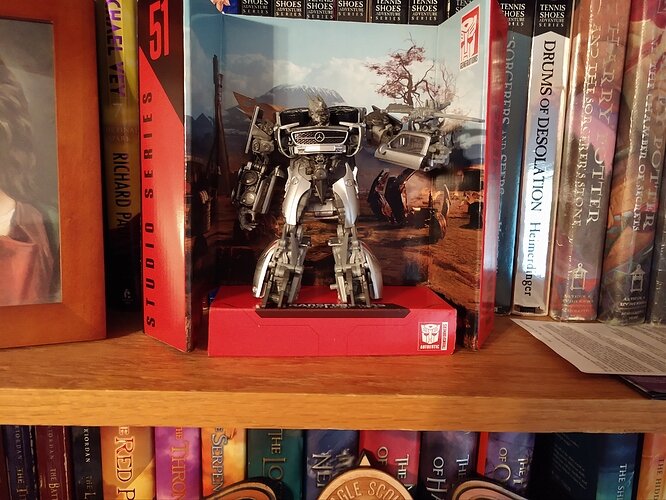 I don’t know if I’ll end up getting any more of these, but we’ll see.

Most of them are really nice. I love the jet shatter and I almost want to buy a second scrapper just to have him seperate from the devestator peice. I’ve on and off collectected them not really focusing on any movie or character but there are very few bad ones; some disappointing but most are really good.

very few bad ones; some disappointing but most are really good

For instance, Satellite Soundwave coming in the next wave. The transformation is his legs bending behind him. Not sure what they were thinking with that one.

I agree but at the same time the robot mode looks great. Its not like we know what he looks like anyway since every appearance was based on the toy after the fact.

Okay, here’s a question for y’all (well, it’s more like two questions, but you’ll see why).

In the end-credits segment of Bumblebee, we see seven comets coming to Earth after Optimus’ little congratulation to Bee. These seven will probably constitute our new Autobot cast for that Bumblebee sequel that’s almost certainly in the pipeline.

I wouldn’t mind having one or two non mains like seaspray or maybe even a new character like with the combiner wars limbs.

As for the comets though they probably don’t mean anything since bumblebee in in that weird stage of not being a reboot but nit a prequel either. then again who cares; bayformers had more backstories then the G1 constructicons.

they probably don’t mean anything since bumblebee in in that weird stage of not being a reboot but nit a prequel either.

I disagree, for a couple reasons:

They’ve already shown Wheeljack and Arcee. It’d be logical to bring them back in the continuation of the story.

And Ratchet, and Brawn (albeit he was injured, but that’s not a surefire dealbreaker), and Ironhide briefly

Those are probably a given, saves time and effort y’know.

Honestly, there aren’t a whole lot of specific Autobots I’m super attached to… But there is one. I would love for us to get Jazz back again.

I would love for us to get Jazz back again.

I feel like there are some certain specific ones, but it almost feels like some of them are changeable enough or only a specific version of the character. Like, I loved Transformers Animated’s rendition of Prowl. But that is very much an atypical Prowl. I would say Wheeljack and Kup are consistent faves of mine though.

I also wouldn’t mine using some armada chacater versions like wheel jack, starscream, etc. the series really had some of the best characters just stuck in a meh story.

cold take but bumblebee is a good film

That’s an opinion? The only movie that’s better is transformers the movie

I saw someone spectulate that those comets aren’t Autobots, they’re Decepticons, some of which are the ones from the first movie (sans Megatron). Which is a theory that I’m not entirely opposed to, especially since I choose to view Bumblebee as a prequel, like it was supposed to be.

The broadcast failed though, the Decepticons have absolutely no reason to know they should come here. That doesn’t just defy the tone of the scene, it defies the internal logic of the film itself.

Eh, true. But still, if we were to go the prequel route, then those comets could’ve been other Autobots that weren’t in the first movie, like Drift, Hound, Crosshairs, or possibly Hot Rod. In TLK, it was said that he’s an old friend of Sir Edmund Burton, but it didn’t say for how long. In fact,now that I think about it, Hot Rod would have a completely legitimate reason for coming. He’d fought with Bumblebee in WWII, so when he heard that Bumblebee was on Earth again, he’d want to come there. Imagine his disappointment when he found out that he wouldn’t be joining Bumblebee on a mission this time…

Personally I’d say that doesn’t make a lick of sense, but none of the continuity does, so what do I know?