Trying to build the Throne Makuta

My 9 year old and I have spent this year building the Shadow Titan, Brawler, and Overlord Makuta. We would love to build the Throne Makuta. There are no videos, no instructions, nor parts lists that we can find. We did find out that the intern who created and built the Throne is Andreas Jensen. We’ve tried our best to reach him without success. Can ANYONE help us? Thank you, Ben and Barry

Care to include a picture of the model in question? 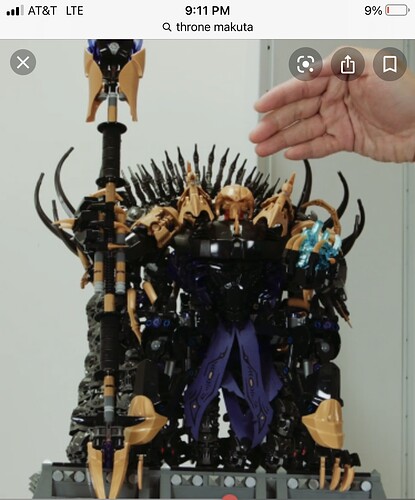 Here’s a picture of the Throne Makuta

It’s been tried here before, but it never got far:

the tittle explains pretty much everything, we are trying to build this beast [image] the community has already made overlord makuta: and the journey to one makuta: it’s time to try and build this one, but we don’t have many pics right now

Note that the above topic is mostly dedicated to the “smoother” Throne Makuta, but they’re pretty similar, and some progress was made on both.

Yes and thanks for your response. We were just hoping that someone had quietly figured out how to build the Throne Makuta, or even more unlikely might know or know about Andreas Jensen who is as far as we can tell the only person on earth who has the information about the Throne necessary to build him.
Thanks again for your thoughts.

that piece doesn’t exist in that color does it?

That piece (the Throne Makuta) doesn’t exist in any color. It only existed briefly in or about 2016. That’s why are are longing to figure out how to build it.

i think he was talking about the gold armor piece

Hello all and anyone still interested in building the Throne Makuta. My son Ben has built the Brawler, Shadow Titan, and Overlord Makutas, all done in 2020. We have been trying since then to build the Throne, have contacted anyone and everyone that we thought might have knowledge of the Throne- no success. Does anyone have any knowledge of the magnificent Throne? Thank you

Thank you so much for responding.
We could never find a ‘parts list’ for the Throne Makuta from any source, including all of the aggregator part selling sites, LEGO itself, the Makuta designers in the Makuta design competition video, the few people who made YouTube videos describing the build of the other 3 Makuta I mentioned above, and other people whose names we were given but who had no information when contacted. The Throne, beautifully displayed fully built by someone in 2016 or so, remains a deep secret and mystery.