So heres a question why is the alphabet in the order that it is?

The current English alphabet is, of course, based almost entirely off of Latin. The Classical Latin alphabet goes:

You can see that the only significant visual differences are the absence of J, U, and W. There are many phonetic distinctions, but those are irrelevant to this discussion.

Now the Classical Latin alphabet was only used by the Romans after they conquered Greece around the 1st century BC (100-1 BC). Prior to this, they had been using the "Archaic Latin" alphabet:

This is where things start to change up a bit. "𐌆", the equivalent of Z, is located after F in this alphabet. H has been turned into a box, M and N are flipped and have elongated stems, R and P are switched, and V looks like a Y. Despite these differences, it is still immediately recognizable to anyone familiar with the English language.

The Archaic Latin alphabet was based off of the Etruscan Alphabet:

The only main difference here is the addition of several symbols, 𐌈, 𐌎, 𐌘, and 𐌙, none of which we use in English today. 𐌑 is an additional letter which is not M, but was clearly merged into the M used in the Classical Latin script.

The Etruscan Alphabet, while partially original, was largely based off Greek, which they had learned when Greeks came to colonize:

Again, it's a little more abstract, but it's still the same basic letterforms. C is clearly a Γ (Gamma) slightly rotated. The same goes for D and Δ (Delta). You can see how L and Λ (Lambda) are pretty similar, and how 𐌐 evolved from Π (Pi). Σ (Sigma) is pretty close to an S. Ω (Omega) is pretty much the only newcomer here. There's some forms missing from the Etruscan alphabet, like F and Q. Those were presumably added from the local Italian script.

Now we finally reach the end of our language trails. The Greek Alphabet was a descendant of Phoenicians:

It's rough, but the resemblances are there. Some letters are flipped, others are skewed, some are nigh unrecognizable, but you can see that it is the father of all of these Alphabets.

To note: while the word "Alphabet" comes from the first two Greek letters "Alpha" and "Beta", those letters got their names from the Phoenician "Aleph" and "Beth". In addition, the word "phonetic" is derived from Phoenician.

and if you want to get real technical, the Phonician script is based off of Proto-Sinaitic scripts, which in turn are based off of Egyptian hieroglyphics, but i figured i'd stop here

So you might be asking yourself "What does this have to do with the order of the alphabet, Slime?"

Well, the order that I posted the letters in is the exact order that they are traditionally shown in. The Romans did it, the Etruscans did it, the Greeks did it, and the Phoenicians did it. Don't believe me? Take a look at this ancient Greek cup: 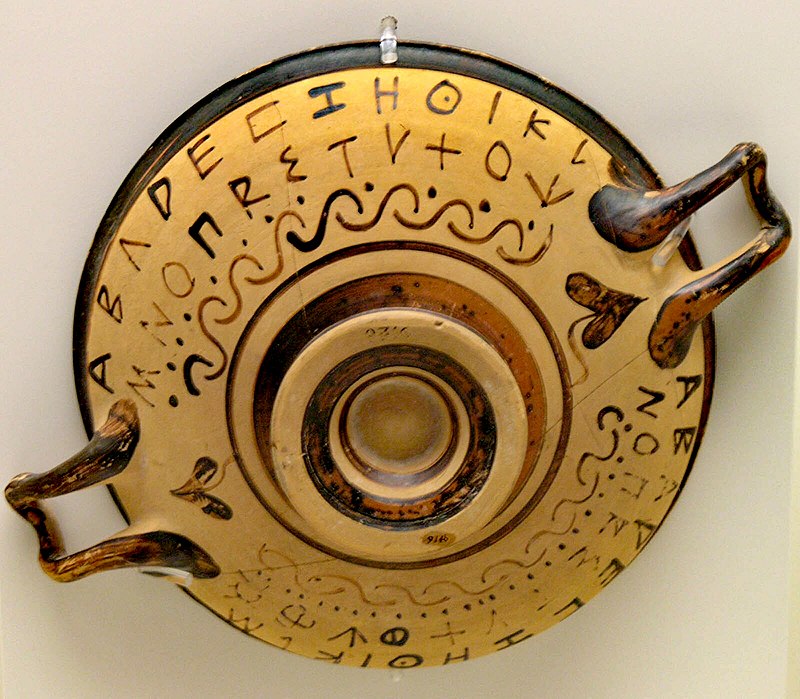 Why are the letters in the order that they are? We don't know for sure. Some scholars speculate that it was originally a mnemonic device to remember the order, like an ancient version of the ABC song that actually made sense. What we can assume is that, whatever the reason, it was kept for consistency of learning. Considering that it's survived relatively intact for the past couple thousand years, I'd say that wasn't a bad choice.

This is why Punic culture is inferior to Latin culture. Ave Roma.

Phoenicians script evolved from the Vicha script, which is the actual oldest writting system on Earth to date, 2000-3000 years before the Mesopotamian one thats propagated in history books.

Also Vincha culture is the oldest civilization in Europe, it evolved around the river Danube on the Balkans (modern day Serbia).

For example, Greek, Celtic, Slavic, etc. deities all share a common ancestral point with this culture.

Since the original Battlefront II servers are back, we should all have a BF2 game night