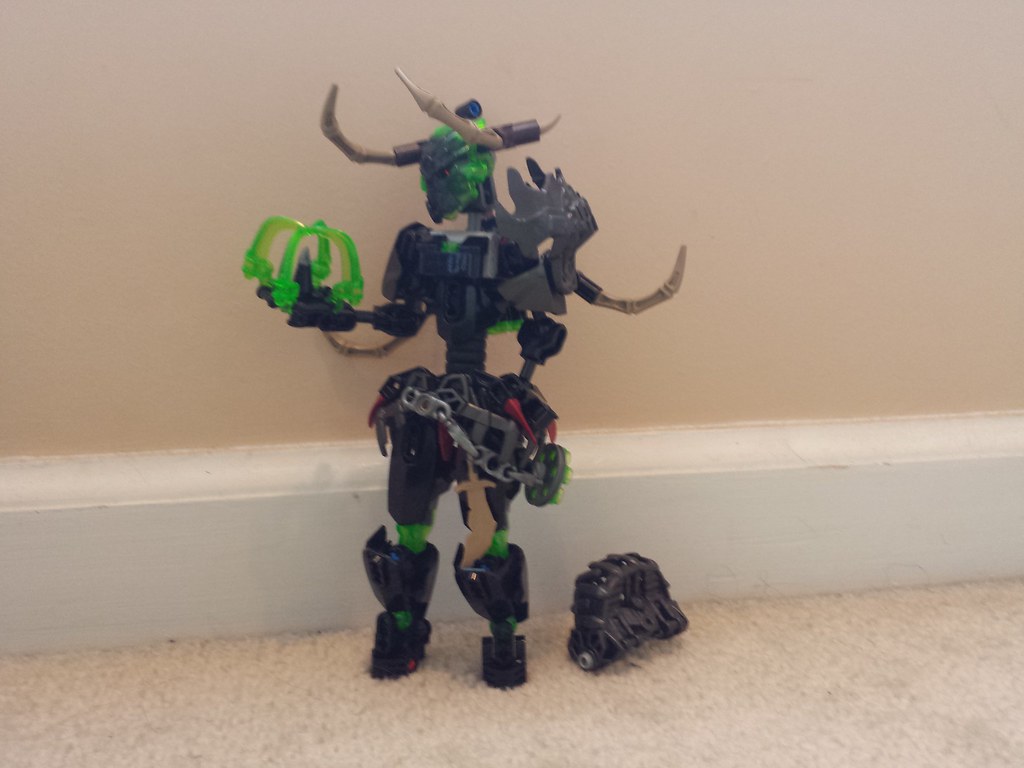 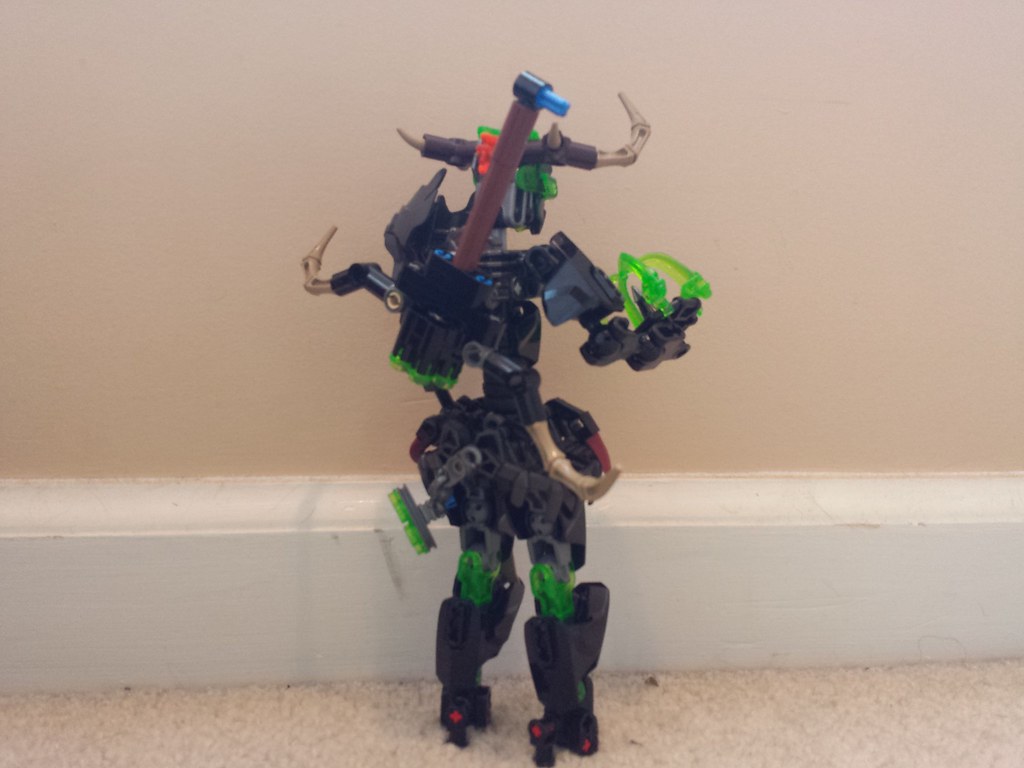 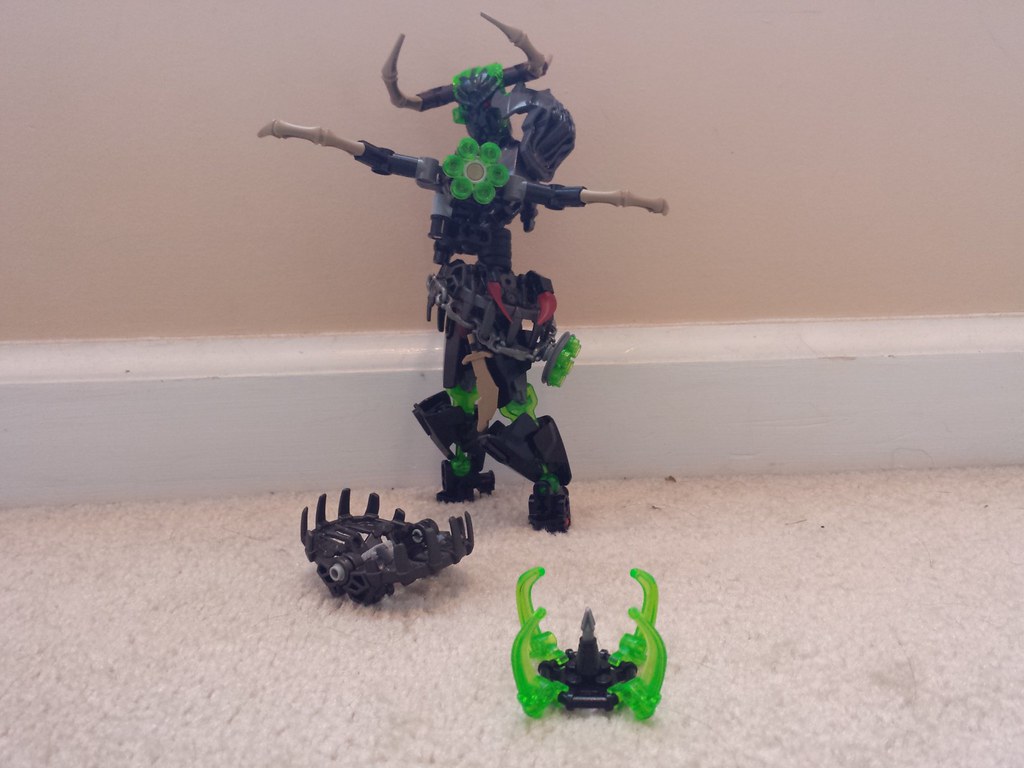 Behold, the master of tactical! Kinda? No? Darnit. 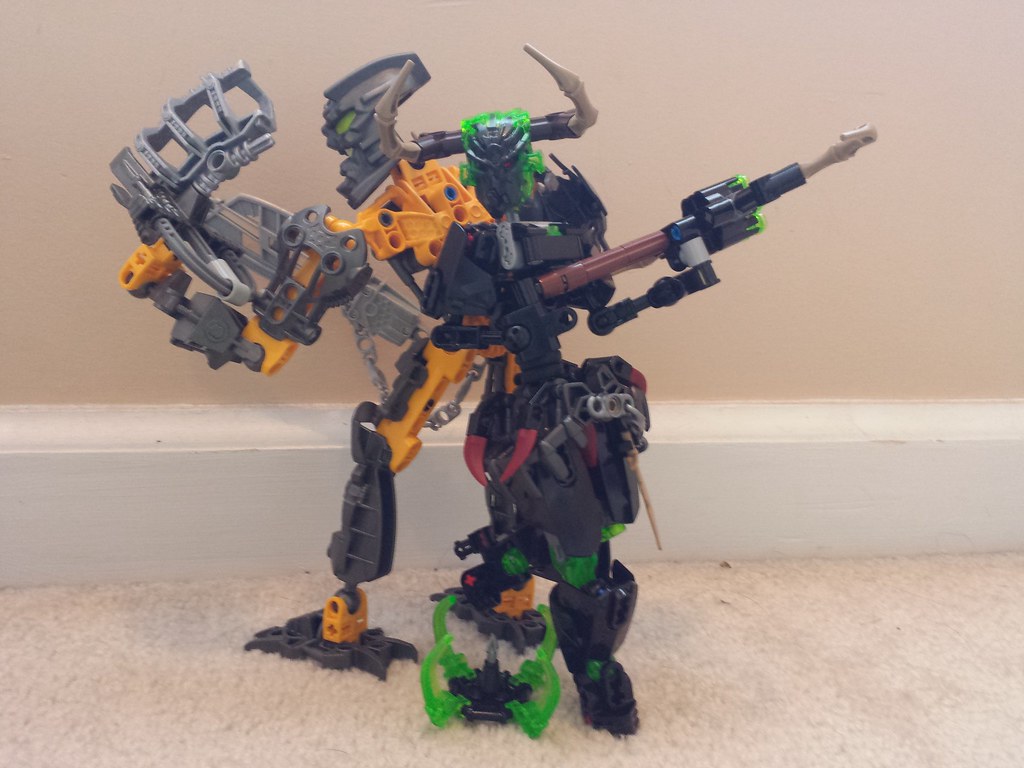 Fun fact she can’t do this pose on carpet without a kickstand. Clearly, Hewkii makes an excellent prop, no? I do really like the pose though, the first BIONICLE I ever owned and the last one I’ll likely ever buy together after over a decade has passed. 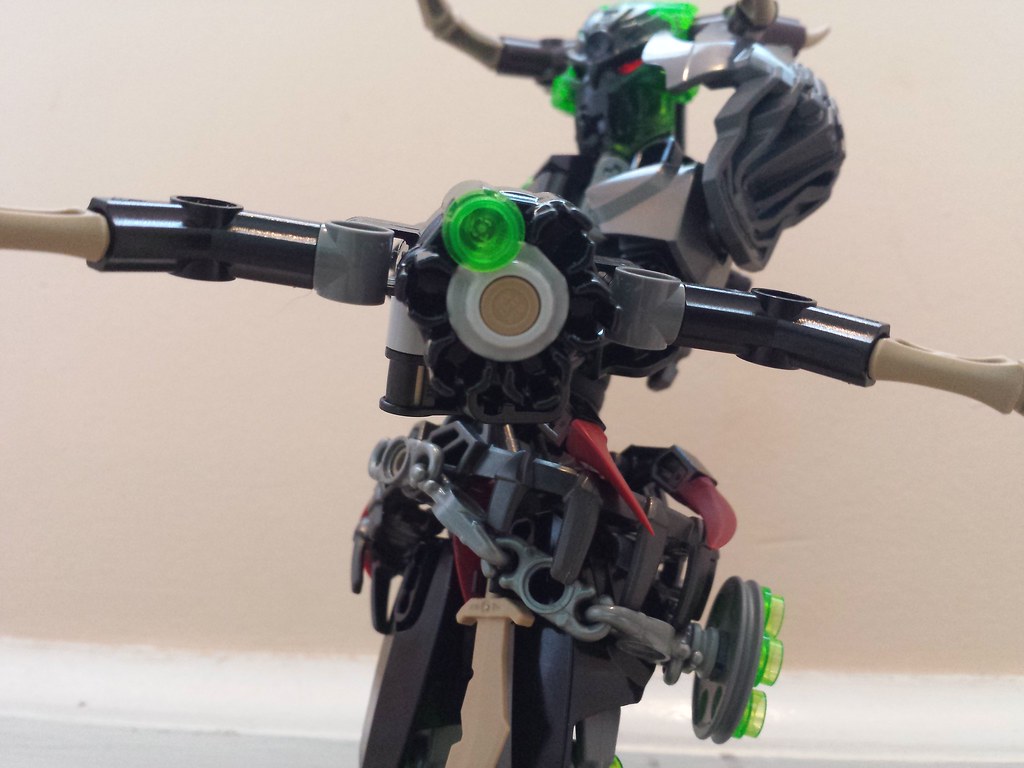 Not the view you want to be your last. Hopefully you’re not a demon, or that trigger will be pulled.

A rather brief project of mine. I’m aware that she’s not as good as my other stuff has been, but it was still REALLY fun to make her. She uses almost completely parts from 2015/16 Bionicle sets, with some obvious additions (the knife and tires come to mind). Pretty much everything else is from one of the sets. In addition, she’s based both off Umarak (rather obviously), as well as the Demon Hunter class from Diablo III (which would be pretty obvious if you’ve played the game much as them, given their use of crossbows, knives, and tactical traps). I tried to reference as many of the Demon Hunter’s abilities as possible, although in the end I only pulled out references to Rapid Fire, Impale, Fan of Knives, Caltrops, and Spike Trap, and Multishot (kinda on that last one, seeing as the bow retains the original function).

That’s pretty much it. Not really a full on Halloween MOC, but it seemed pretty fitting and she was a blast to make. I don’t think I’ll be making any more in these style for a while, but I’m not ruling it out entirely.

Next up is HOPEFULLY finally a villain to contend with all those protagonists I’ve made recently. The gunslinger is getting impatient, after all.

OH, and before I forget, the foot design credit goes to @Alieraah. Really simple but hey, I needed tiny heels because Demon Hunter. Don’t listen to anybody, it’s DEFINITELY 100% practical to fight the forces of Hell in high heels.

See you later. Ekorak out.

Not sure how I feel about the feet, but everything else works pretty well.

the only thing that wasn’t designed by him and you complain about that, weird

that might have sounded a little bit mean, if it did, sorry

Oh my gosh its an Umarak generbend! BURN IT!
No but really though its actually pretty cool anyway, specially love how you moved the trap armor the the hips to make the shoulders smaller.
The smaller bow is also a nice touch, as are the horns, though you might want to fill in the lower arms with tires and add some trans bright green to the arms, they look a tad dull compared to everything else.

The feet look pretty sketchy but other than that night complaints

The feet are a bit of a style choice. I hate having feet that are completely huge compared to the actual legs of the character, and Meskii’s foot design works well enough for me here.

@Asriel
I knew they would be controversial compared to the rest of it. Such is the nature of the beast I guess.

@AwesomeJoel27
Umarak has always been female in my heart. I hated that he ended up being just a generic raspy voiced ancient hunter out for his own gain who ends up manipulated into the main villain’s control. This is essentially my response to that, not really a full out MOC.

@LTVmocs
Sketchy?
Unless you mean that by the “incomplete” definition I’m not quite sure what you mean. I do understand the idea behind it though.

They don’t looks right, they don’t really fit in to me

I can kinda understand why. As mentioned, they’re definitely a style call.

Again, I understand it. Not sure what else I would use. Any suggestions?

try trying to make them bigger, small feet on protector body is OK but it is kinda small, try to get it around the size of a protector’s feet

Yea i think either a custom system foot or a protector sized foot would work better. Overall its a cool revamp.

This moc make me unconformable in some ways.
I’m not sure if this is a completely different character or just Umarak with a gender swap. But this comment kinda explain why (?)

Umarak has always been female in my heart. I hated that he ended up being just a generic raspy voiced ancient hunter out for his own gain who ends up manipulated into the main villain’s control.

The build is pretty great for a complex character that primarily use pieces from 2016 sets. Umarak looks more of an imp than a demon (even though imp are known to be small demons), I hate the Meskii’s foot design but this pulls it off way better than all of her other moc did, and the waist kinda kills it for this moc from being a strait pole.

I hate the Meskii’s foot design

Yeah, it’s always kind of just looked like a block to me, which is what I don’t like about it here.

@LTVmocs
@Tobin-Bartram
Best I can do within the parameters of the project is to try and slightly bulk them out a bit. Protector feet are not only a big no-no for most of the higher tier MOCists I know of, they’re also not high heels…which sounds really dumb but hey, source accuracy. Gotta stick to it.

This moc make me unconformable in some ways.

I have no idea why.

As for the character origins, it can be taken either way. There’s no real lore behind this character, just a concept I felt like executing as a short reprieve from my story MOCs. If you want to think it’s an Umarak genderbend, go for it. If you wanna roll with it being another member of his species, that’s also completely true. I really don’t care either way, as I’ll likely never explore her story further.

In reference to the imp/demon thing…she’s not meant to be a demon. Demon Hunter. Quite a large difference in the Diablo III universe. I suppose I should have left this as source material reference
reference though:

Seeing as most of them are my close friends, and also hate the part and how it looks when used as feet.

I tend to avoid using it.

Especially seeing as I agree in a lot of circumstances, I don’t like how it looks unless it’s modified in a specific way. In this project however, it’s been outright ruled out for the aforementioned high-heeled source material. I’m trying to keep as close to source accurate as possible.

Well I have 2 things to add, while the “high heel” feet look good, in my mind they’re more like hooves to give her more of a Satyr kinda look with the antlers.

However the protector feet might also work if you give them claws as the original Umarak also had 2 claws on his feet.

Not using one kind of piece because [quote=“Joe, post:15, topic:30321”]
Protector feet are not only a big no-no for most of the higher tier MOCists I know of
[/quote]
is just kinda silly
its just a foot piece, its not like its an Inika torso or so, I get if you don’t like it cause its too animalistic, but then use it on an animal and not a humanoid thats supposed to be wearing shoes or so.

Either one would work in my opinion, and I get you wanted the heel but thats just my opinion on the protector feet thing.

It’s a weird thing in the foot topic. It’s completely reasonable to simply dislike how the Protector foot looks, and most of my friends do just dislike it. I do too, except with the Mechdragon foot design.

Thank you all for the feedback by the way.

Confused as to why Umarak’s a girl now, but the MoC is alright. I like the tan/beige sword piece, that’s a nice addition.

I don’t mind the Meskii foot, and my problem with protector feet is just how…limited they are. Custom feet certainly look like a option for me soon.