Unnamed New MOC (Considering it to be self MOC)

Alright, well, where do I begin with this one. Firstly, this is a MOC that was made through a bit of an odd turn of events. He’s unnamed, and had a one in three chance of not existing at all. To quickly explain how this MOC came to be and how it might not have existed at all, I had 3 pieces I found and had a thought about, 3 pieces that I rarely seen used in MOCs these days, excluding a few matoran sized MOCs of course. I had a red Slizer gearbox body, the lime green Roborider body, and the yellow Roborider body.

I wanted to use one of these in a MOC yet I couldn’t decide, so I set up a random number generator with 1, 2, and 3 being the parts to choose, and I left it up to chance to pick the part, a sort of challenge. The yellow Roborider body is what I ended up having to use, and the challenge I gave myself was I absolutely had to use this part in this MOC. I chose to attempt to use that part to make a torso for the MOC, found my Tanma mask while digging for parts, and then finally I remembered someone telling me to try and use CCBS parts a bit more often, and thus this guy was made as a result.

He sadly does not have a backstory, no distinctive characteristics, and no name, I made him entirely as a challenge for myself revolving around one specific piece. However, I’m oddly fond of this MOC for some reason, so much to the point where I am wanting to work on this MOC further in the future to make this my self MOC. 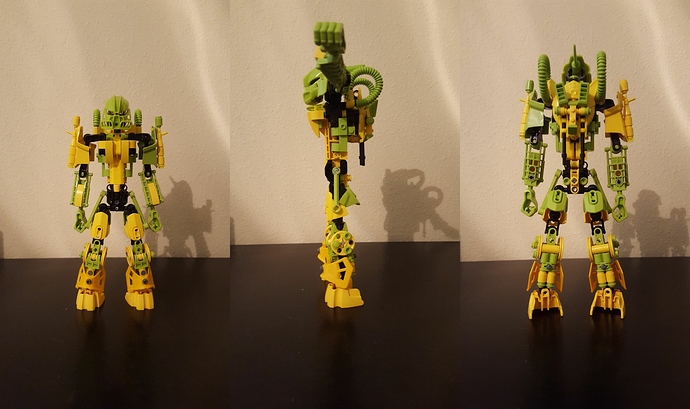 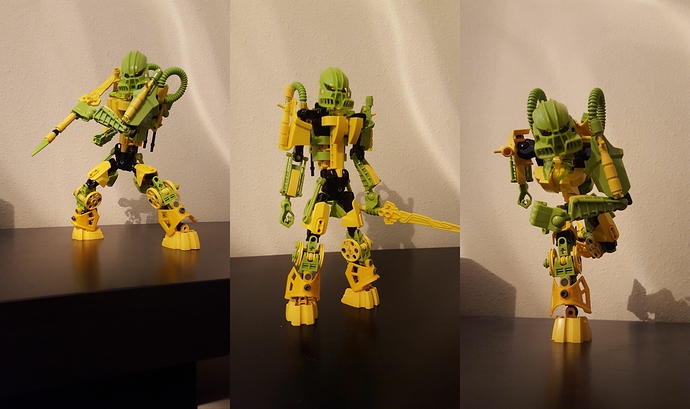 Even though he doesn’t have much of a backstory(or rather, any backstory for that matter) or anything of that sort, I really am oddly satisfied with him, although he does need work on quite a few areas, especially the hips since the waist only has a swivel on it, though for the time being I think he looks alright. Figured I might as well put him up and see what others think of him as well.

On a side note, I’m aware of the two red ball joints, and the Keetorange ankle guards which I am ordering replacement parts for those soon, so those aren’t exactly going to be staying on him.

I dig it, the color is pretty well spread and is an interesting combination. The build is fairly solid and the fact you used a part not normally on characters of this size is even cooler. Dig that sword and those legs.

My eyes!!! What a color-scheme!

The MOC is well-built, although I’m not certain that I like one shoulder being yellow and one being lime-green. If there were other areas of asymmetry I’d like it better, but given that the rest of the MOC is equally distributed among those colors, I feel like it’s out of place.

The sword is simple, but it fits well with the character, and I really like the legs. The feet also seem to fit, despite not being the easiest parts to incorporate into a MOC.

@Baldric Thank you very much, I really wanted to challenge myself to see if I could improve my building capabilities since I am still very out of practice. I also could not help but look at this piece a lot while trying to start building him since I never see it used anywhere, no matter how hard I look around. I sketched out a few rough ideas that I thought would work, but they looked horrible, so in the end I decided I would tinker with it, try and slap arms onto it, then after a while it turned into a Torso. I’m glad it actually managed to turn out well.

@Toa_Heatwave Thank you! I agree with the shoulder bits, though I only did that since I didn’t have two in either color, otherwise I think I would have made them both lime green… Or yellow… I don’t know yet, I don’t want too much of either color so that will take some thought, though that is an issue that will be fixed soon enough hopefully.

The sword was the very last thing I made because I wanted to give him a weapon, but I didn’t want something so ridiculously huge because it just looked off with him, which was proven when I made him this obnoxous underhanded cannon that just not fit at all so I scrapped it. He looked like he’d have back problems just from looking at the darn thing.

I’m glad he came out looking as good as I was hoping considering he was build with a single piece in mind.

Thank you very much. He’s not quite where I want him yet, though for the time being I’m personally happy with him, despite the flaws such as the lack of real abdominal articulation I’m happy to have him sitting on my shelf. I should probably challenge myself with odd pieces no one really uses in MOCs more often since I got this guy because of that.

This Moc is fresh, and not just for the lemon-lime colors. Tall, but well proportioned. Very nice use of pieces.
Amazing!

@LurkingEhlek
Thank you very much, I personally feel his arms are a bit long, though thank you for the compliment on my MOC. I’m definitely hoping to improve upon him in the future.

@Kivax8
I’m surprised you noticed the neck area since I just noticed it doesn’t show in the pictures very well, though I must agree it isn’t the best, if I had a better method then I would have used it, though the only issue is a lack of a upward articulation. I’ll attempt to find a better solution, however the neck is currently in the only position I can have it in without looking extremely out of place.

Really diggin’ it, the colors rock and the build is pretty nice! All I would say is to fix the colors on his upper arms, unless you meant to make them asymmetrical, maybe make custom lower arms, and, while those Ben 10 feet are unique and work well, they are a very limiting piece and the gappyness in the back is unsightly, so maybe find a different way to accomplish that look.

The asymmetrical look of the upper arms was only due to the fact that I do not have two in either color, which I plan to fix once I figure out which color I choose to stick with (I’m considering lime green since it would have yellow on the armor anyway due to the cylinders being on them).

I was considering custom arms, but for some reason I really prefer how the pre-fabricated limbs look on him. That doesn’t mean I won’t experiment however, I’m definitely going to be tinkering with him a bit over time since right now this is my favorite MOC I’ve made, and maybe I’ll find some other methods that look better with him (such as finding a way to keep that Roborider piece as his torso whilst giving him some actual waist articulation).

While I do agree with you about the unappealing gaps in the feet (and the fact LEGO never thought to add some kinds of axel or circular pin holes in the gaps at all, which is incredibly stupid and unlike LEGO to make a piece so limited to one connection point and nearly no other use), I find myself able to look past them. On that note, whilst many things may change with this MOC depending on what I decide to fiddle with, there are 2 things which will never change; the Piece for the torso base, and the feet.

I’m greatly thankful for your input however, and I’ll definitely keep everything you said in mind while tinkering with him in the future.

That’s understandable! Good luck with this in the future!

Thank you very much, definitely hoping I can make more like this as I build since this is just the second MOC I’ve made in years, I’m just the most fond of this one out of the MOCs I’ve built now and in the past so I suppose that’s a goal I can make. Anyway, once again, thank you for the kind words and advice.