What are some opinions you have that seemingly no-one else does? I’ll start:

I kinda like Hewkii Mahri’s mask.
I think romance should be non-canon. It doesn’t make sense in Bionicle.
I thought Spider-man 3 was a pretty decent movie.
I don’t think the J.J. Abrams Star Trek movies are terrible, but I don’t think they’re all that great either.
Not sure if this is a popular opinion or not: I couldn’t stand The Desolation of Smaug.

I’m sure there are more, but that’s enough for now. What are yours? And remember: don’t post any opinions relating to politics or religion. Also no flaming. I probably didn’t have to say that, but better safe than sorry with a subject like this.

the toa mata are my least favorite toa team, story and set wise

I like the new BIONICLE a LOT. A lot of the BZpower fans hate it, but honestly, I just love how this new one is going. Most of the sets are spectacular, and I think Lego knows what they are doing on this one.

My older brother, @ToaKylerak, would agree. He was first worried after he saw the leaks that the new BIONICLE would not live up to the old, but after he saw “The Legend” animation, he is starting to get hyped and wants to buy the new sets.

Yeah. The Mata Nui story arc is the least interesting to me. Also, Gali and Tahu is not the best possible Mata ship.

Not sure if this is a popular opinion or not: I couldn’t stand The Desolation of Smaug.

I thought I was the only one. It was incredibly boring compared to the previous installment.

@charyas Blasphemy! XD Seriously, to each his own. If you weren’t around for the early days, I can definitely see why you wouldn’t like them as much.

@Chronicler I haven’t made up my mind, tbh. It could certainly be good, but I’m worried that it’ll be more “kiddie” than it used to be. Only time will tell.

@Hawkflight KopakaXGali all the way. XD (Or maybe LewaXGali. It’s not something I’ve put much thought into.

)
I would conjecture that the Mata Nui story arc appeals most to those who really like myths, legends, fairy tales, and the like. The characters are all very archetypal, and the plots are designed around repetitive tasks and quests. I love it, but obviously not everyone is going to.

@Collector Not only was it boring; it had almost nothing to do with the book. Easily 2/3 of it was either completely made up, very loosely based on something from one of Tolkien’s other writings, or changed so much from the book as to be unrecognizable.

I find My Little Pony to be the most annoying, most absurd, and most nerve-racking thing to ever exist. And “Bronies” don’t help when they push it on you.

I like Halo 4 Halo Wars, and all those other games in Halo that people hate.

I prefer The Hobbit movies over the LotR ones.

I actually don’t think the Mistika were THAT bad…

Also I think the Transformers movies were good.

I like Galidor at all, favor Eljay, and LIKE the stars (whoops, will change that in my set-hatred topic)

BIONICLE didn’t need to come back.

That’s the big one. Most of my others are about video games, such as:

SSB4’s graphics aren’t as good in style as Brawl’s.

Zelda 1 is all around a terrible video game. 2 is exponentially better.

Sly Cooper 2 is by far the worst in the series, and 4 is one of the best ones.

And then there’s my biggest movie opinion for the last few years, being that Hunger Games isn’t well made at all, and this is coming from someone who was super hyped for the first one.

I honestly have never like any shooting games (besides BIONICLE Heroes, but only because of the music and graphics) because they are redudant, not to mention games with zombies, aliens, ect. that are over the E+10 range.

I do, however, likes original games like Minecraft and Portal. Both are awesome games.

I really liked Galidor. I liked the stars.

I don’t have many unpopopular opinions.

How can you not like these pathetic aliens that were made for comic relief? 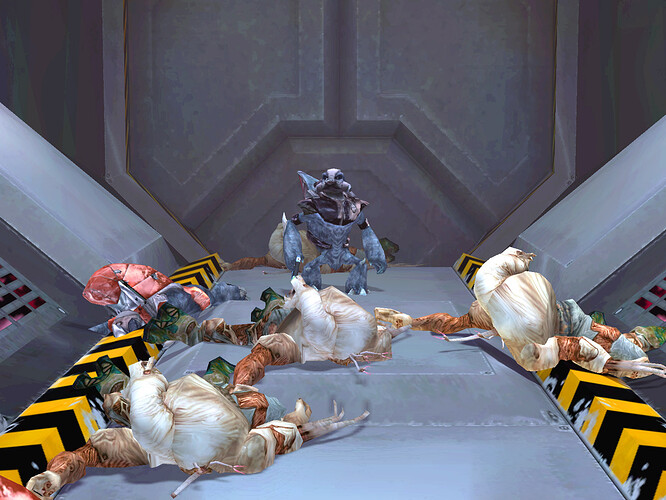 I do, however, likes original games like Minecraft and Portal. Both are awesome games.

My own:
I love killing off my own characters, even occasionally Ekorak or Rai (I am listening to a song where storywise I killed off one of those two right now in fact)
I think that near the end of BIONICLE the story remained intact even if the sets didn’t.
I don’t like gaming consoles.
I dislike TPS games.
Best thing LEGO did with BIONICLE was kill characters such as Matoro and Makuta.
I don’t approve of half the ships I hear of (TahuXGali, AlenaX @Eljay, @Viper X @Mesonak, meanwhile I approve of @Kahi X @Kahi, MatoroXHahli, so on and so forth)
I dislike double posts as they look sloppy (this seems to be unpopular)
I actually find Ekorak’s 2015 form visually appealing despite his one-deep waist.
I dislike the biomechanical details of normal BIONICLE armor on MOCs, and prefer the smooth look, but prefer the details on the actual sets (this could be confusing)