I’ve finished my Varian, so I show it here! 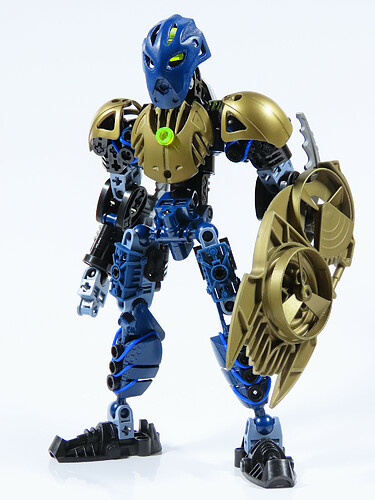 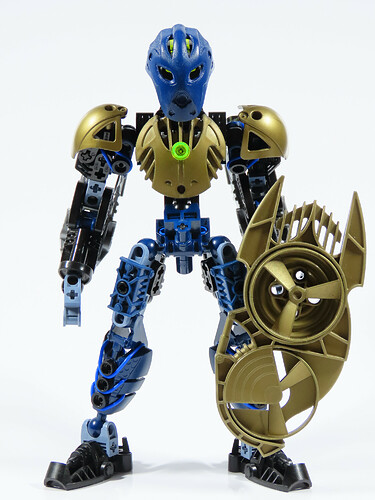 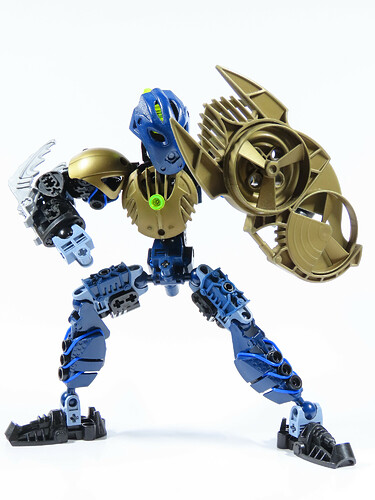 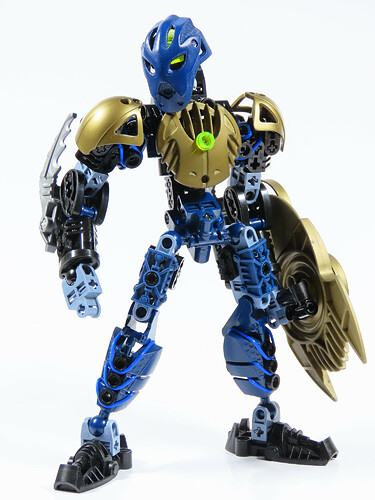 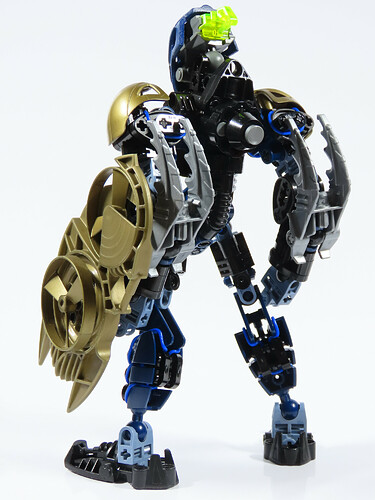 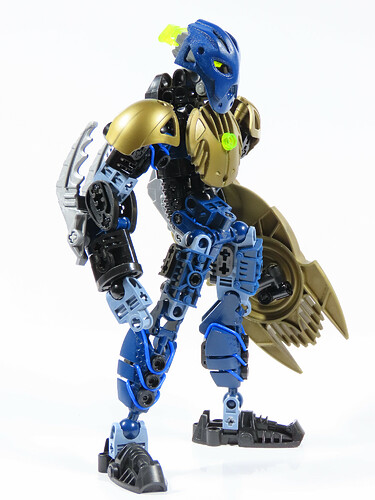 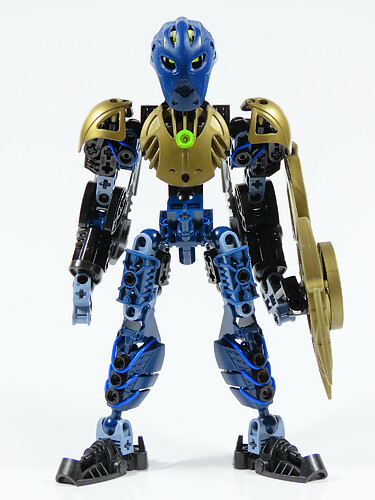 What I kept in mind when designing her was the fact that she was an old friend of Toa Norik.
From this fact, I interpreted her design as something that should be a little reminiscent of the aesthetics of 2005 (the year of the Hordika/Visorak/DarkHunters incident).

However, despite the fact that she has a shield and metallic armor, she was not a member of Toa Hagah, so I deliberately made her metal armor color ratio different from that of the Hagah members. 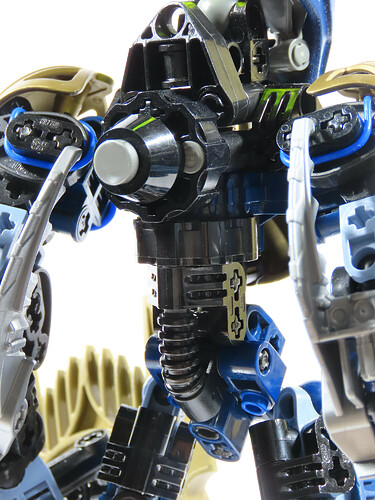 (That’s why I didn’t design her as a pure “Metru-type”.
However, if she were designed too differently from Norik, such as Inika-type, she would move away from the unique 2005 aesthetic of eclectic chaos and harmony.
So I designed her as a unique type that has something in common with Metru-type.)

On the other hand, I also had to admit that this design theory was a bit conservative.
So I gave her some unique aesthetics, as shown below. 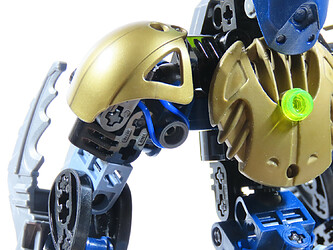 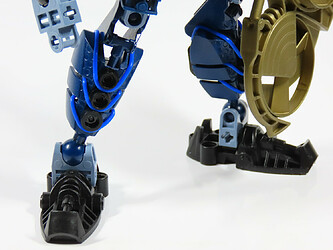 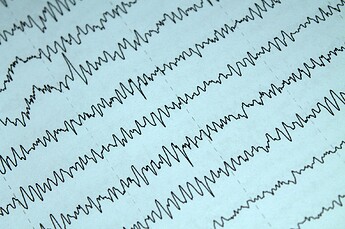 The first thing to mention is probably this “blue line on her shoulders and shins”.
You probably remember that when I designed Orde, I interpreted the Elemental “Psionics” as an "invisible force."
For Orde, I interpreted the shape of the ribbed hose as a “wave of force” and used it for aesthetics, but this time I further developed that interpretation and got the idea of a “brain wave / Electroencephalogram”.

(Toa is a Bio-Being, an artificial lifeform, but they can sleep and even dream.
And in her main story, “No One Gets Left Behind”, “dream” is portrayed as a crucial element of her friendship with Norik.
It is a well-known theory in the real world that brain waves literally indicate the function of the brain, and that the brain and dreams are very closely related.
On the occasion of designing the Toa for Psionics, I thought I had no choice but to relate these facts to her character about “dream”.
In addition to these points, I decided the overall imagination for her, from the shape of Kanohi Calix looks like a brain.) 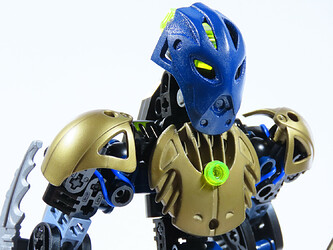 0211500×1125 359 KB
In addition to the brain waves, the Easter eggs that in turn symbolize dreams, I also paid attention to her “Aesthetics as A Toa”.
First, Nuva Armor on her shoulder shares a shape with triangular holes with the sides of Calix.
The Bohrok shield on her chest also shares a shape that looks like three claws or ducts on Calix’s forehead. 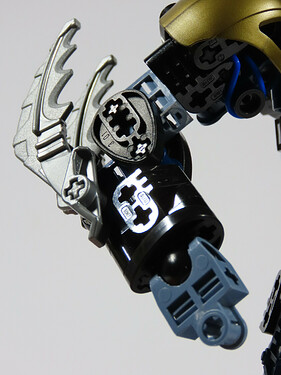 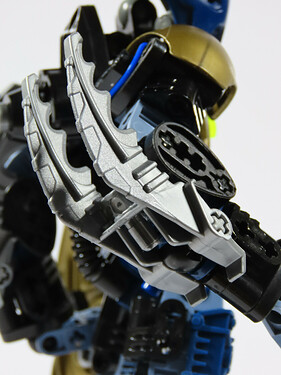 Also, her Tool, Armblade, is called “wicked looking blades” by the narrator in NOGLB, so I thought that a simple knife or dagger on her elbow wouldn’t match the canon.
Therefore, I adopted silver Gorast nails as a piece that matches this expression - as “the wicled blades”. 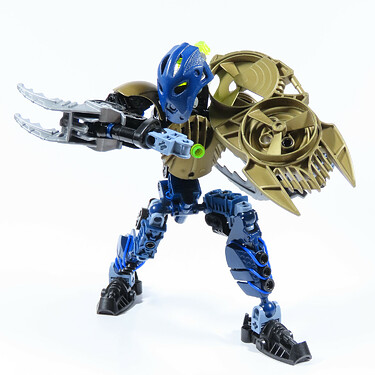 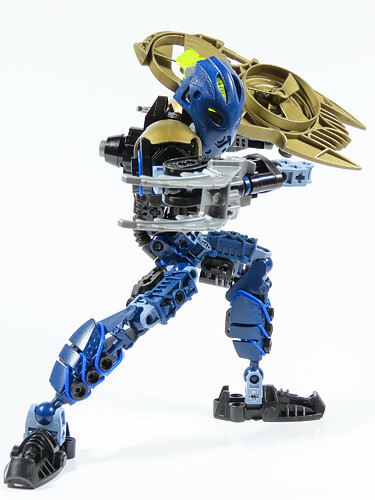 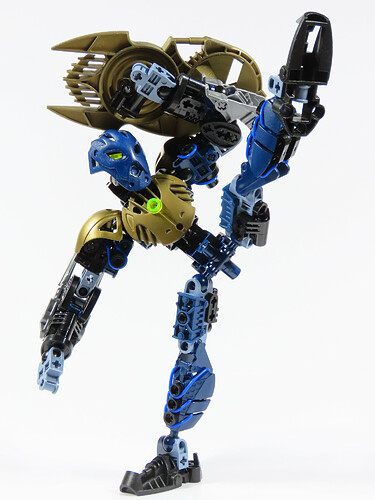 It is well known that she tends to seek action as much as possible when accomplishing her mission.
On the other hand, she is also said to be not stronger than she thinks, so I interpreted her as “a woman who is a little intoxicated with being as Toa.”

In that case, I think she sticks to “fighting cool as a hero”, so I’ve delicately adjusted her body shape to be “overall smart and not too poor.”
(Japanese heroes often wear intimidating armor, but Marvel and DC heroes tend to wear suits that doesn’t change wearer’s body shape much, and very good to battle action. I chose the latter implications for her design.)

(Her arms and ankles are black because of the comic hero’s suit motif.
A special, more carbon-like, flexible and durable material rather than armor. Of course she’s Toa, so It’s actually a metallic Protodermis armor, but this is an aesthetic story.) 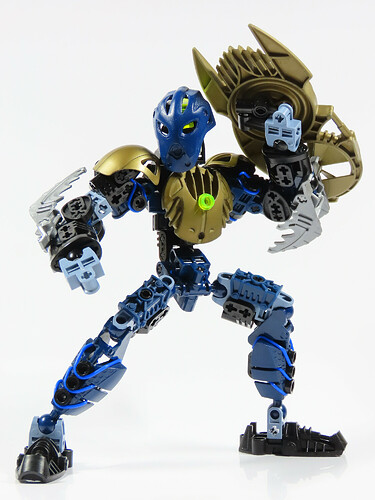 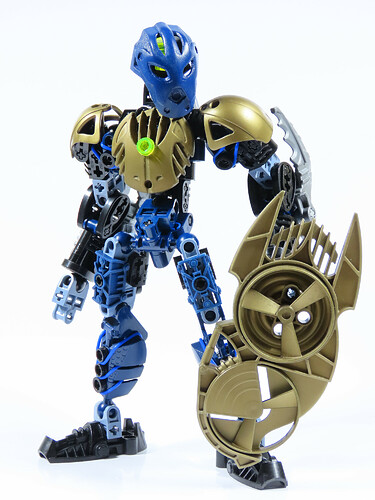 Also, in NOGLB, when Varian asks that " I get to be 'Gold.", Norik had dissatisfied with it, and she replyed to him “I’m not going to be ‘Blue.’”.
In other words, she means that Norik is “not so golden” to the extent that she is dissatisfied.
But Gold is one of her Elemental color, so I limited her “gold” to her chest, shoulders, and shield - “the part of her most eye-catching”, for while using gold impressively, the its overall ratio is not so large. 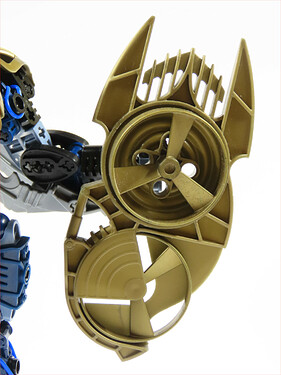 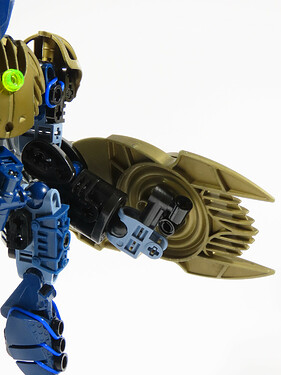 Her shield has a handle that moves freely, so you can easily make it at any angle.
This is because we emphasized the function as an “action figure”, and if you don’t like it, you can of course return to the same structure as the Hagah members.
(I didn’t want Rhotuka to fall out, so I chose this method for the purpose of fixing it as well. However, even though Rhotuka doesn’t have a connection to use for building, this method uses an axle and illegal connection that it goes a into the hole in Rhotuka. It’s understandable that some people don’t like this because it )
.
.
. 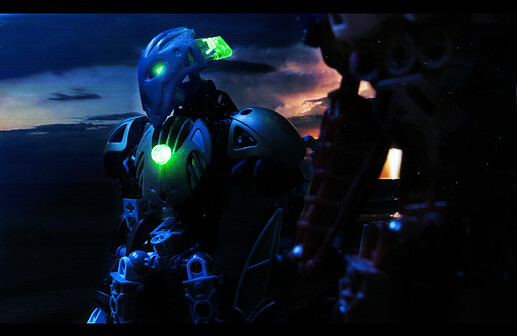 "Thankfully for you, in stasis… you also won’t be able to think." ─The Shadowed One 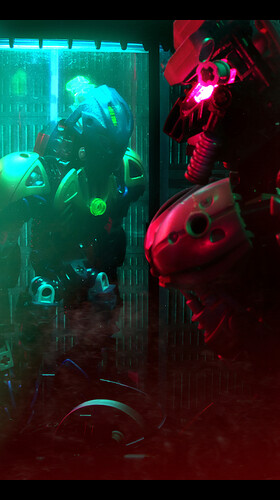 (About Instruction, I will share it when entring contest!)

This is awesome! I love the blue rubber band highlights and the idea behind it! And the best part is that it took me a moment to figure out how you did it. Also, this is somewhat similar to my varian, only better lol. See you in the polls! (Whenever they are)

Nice job @Bukkey!
I really like the armor shaping and how you interpreted the elbow blades.

Its a very nice moc, however the legs seem a little simple compared to the rest of the build. I’m also not a massive fan of the hunch she has going on at the waist. However with that said I love that arm design and the torso build is excellent. Your designs continue to inspire me so much that I modelled my own version of Orde inspired by yours. Who knows, maybe I’ll do Varian next? Overall this is a solid moc and a solid future entry to the canon contests!

Great build as always, fantastic use of the rubber bands!

I’m waiting to see your Varian! see you in the Poll!

I’m glad to you see my Varian like so!

But I want to see your contest MOCS! If you’re ok, please show us it!

And I think it’s hard to say, but even for women who aren’t very muscular, the base of her thighs is clearly thicker and becomes thinner towards her knees. If she is a female-warrior, this is more naturaly.
(but at the same time I thought it would be too strange to give her a massive proportion like Axonn, so I chose to narrowing her shoulders a bit for balance in this point. This time, the motif was Marvel and DC’s functional hero suit, so I am more delicate than usual in the MOC’s body shape. I’m glad if you understand my designing reason!

The rubberbands as detail on the legs is total genius.

I’ve actually already made a topic for my Varian (although not the most up to date version) so if you want to check her out just look up Toa Ultima part nine: Varian, toa of psionics. My most recent version doesn’t change much, it just shortens her torso a little bit as that was a something I got many comments on.

Impressive! Good use of different colors and great attention to detail. The only thing I would personaly change would be the armblades to one of these:

Other then that I would not be dissapointed if this would win.

I’m glad to hear your opinion!
And I certainly thought about using these pieces once, but in the end I wanted to cherish what they were called “wicked looking blades”.

Also, when using this piece,
(As always) I’ve completed a rough design sketch before I start building.
So I paid attention to “how to use the very assertive color, the gold, in an orderly manner”.
As I wrote in the description, I limited her golden color to her chest, shoulders and shield. Because the part from now on is the “conspicuous” part.
Also, in the hero suit motif, which does not change the wearer’s body shape much, these can be clearly described as “additional metallic armor”, so I did not intentionally make the blade golden.
(Because the blade starts from her elbow and extends to extend the shape of her lower arm, if you make it golden, even that part will be regarded as her body shape, and the whole Impression will be distorted)
Therefore, I intentionally change the color of the shield and blade as “clear additional armament”.
(So, even if I had this golden piece, I don’t know if I finally adopted it)

But I’m always see everyone’s great MOC and opinions, include you!

i like it!
i always imagined varian wearing an organic-shape calix, though.
i like the elbow-blades, they do look “wickedly sharp”

About Calix, it may be changed its design in the art contest!

when Varian asks that " I get to be 'Gold.", Norik had dissatisfied with it, and she replyed to him “I’m not going to be ‘Blue.’”.
In other words, she means that Norik is “not so golden” to the extent that she is dissatisfied.

I remember the first time I read that story (years and years ago, before I knew that Toa of Psionics were blue and gold), I had assumed that Varian wasn’t gold at all and she was just being funny. So when I learned that she was, in fact, gold, the joke didn’t really make sense any more.

Limiting her gold definitely makes sense to me. Maybe you could limit it even further by making her shield silver, to match her blades.

When I design the canon character, I often try to express his/her character and profile in design, for make him/her to fit with BIONICLE world.

And, Off course, I once tried silver on her Shiled.
But I felt to gold is better on color-balance, as I thought first.
(I know that some characters has very nice coloring with gold-armor and silver-tool, like Lhikan. But in this design, I felt so.)