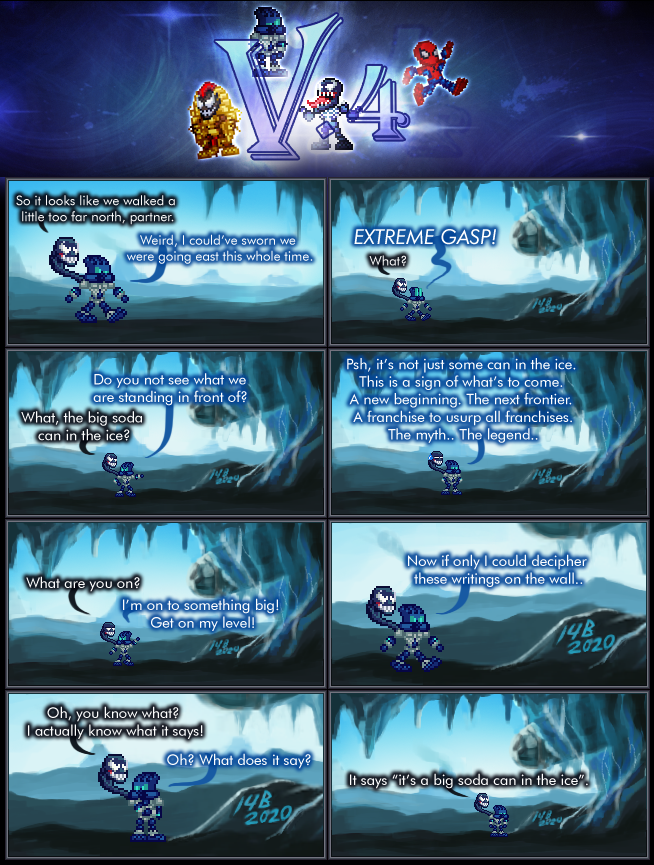 V.4 is a brand new comic series I’ll be working whenever I have some free time and new ideas to explore. I have a different direction in mind that I want to take with this iteration of the comics. Though they will be set long after the events of my old comic series, you will NOT need prior knowledge of them to understand and enjoy this series.

V.3 was the indicator that I had surpassed 200 comics during the series’ original run. It became a mostly plot-driven comic, as I originally intended to end the series with a bang… But instead it kind of died with a whimper.

While I never finished V.3, I did plan out the whole finale in a word document. All the ideas are there, just waiting to become actual comics. Most of it had to be rewritten from memory, and it also needed some revising for the sake of telling a more cohesive story and making a more natural transition into V.4.

If you have never read my old comics, don’t worry. I don’t blame you. There’s 266 of them, they are really old, most did not age well, and some required Marvel comic book knowledge to fully grasp. Just stick with the new content, and everything you need to know should be clear.

Thank you to all my internet friends and acquaintances who have followed and supported the series during the original run. In retrospect, I’ve gotten a lot of help, motivation, ideas, and resources from you guys to make this series as fun and awesome as I could, and I do appreciate it. It made me more invested in story-telling, illustration, and the little nerdy hobbies I enjoy to this day. I hope that some of you are reading this just to join me in revisiting our little niche history.

Newcomers, thank you for humoring me. This whole thing meant a great deal to me back in the day when sprite comics were popular, so it’s incredibly nostalgic for me to revisit this, and honestly, quite fun to give it another go.

I hope to continue keeping you guys entertained with whatever fun ideas I come up with.

Sprites used in the comics were produced by myself and many others as contributions to Rahi Zaku’s BIONICLE sprite kit. 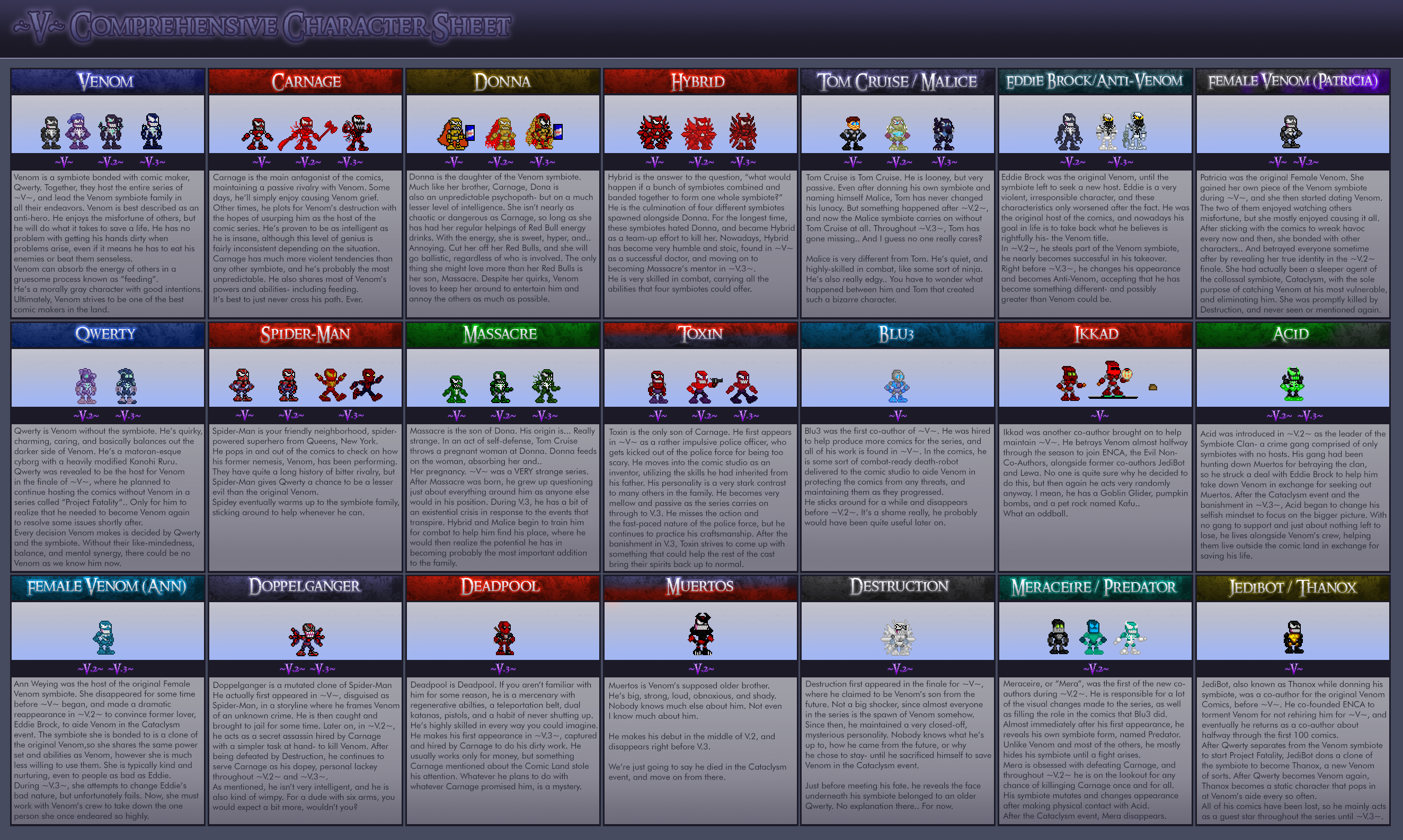 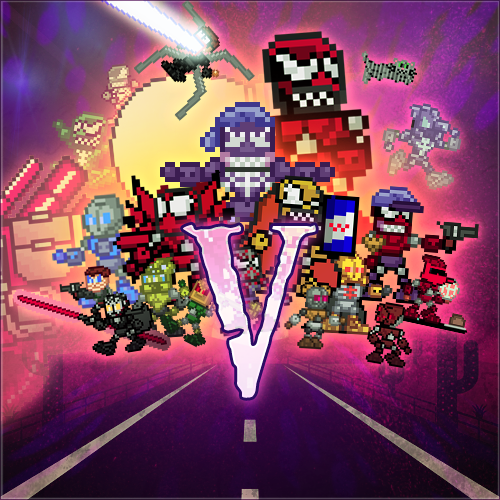 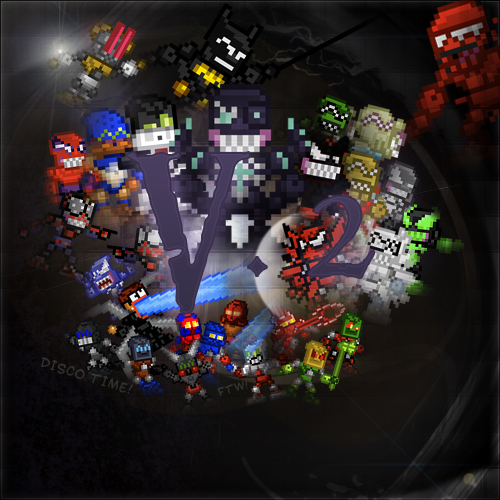 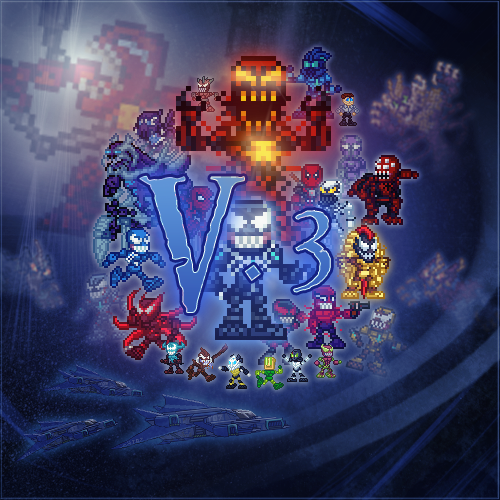 This is a lot of comics.

And they are all optional.

Oh man, the days of being a comic maker. Sometimes I wish I had the willpower to continue my series too.

@Ven Don’t know how open you are to suggestions, but I think a conversation between Riot and Movie Riot would be great!

I’m totally open to suggestions! I think that would be a neat idea.

Just remade a couple of ~V~ comics to replace the lost links in the original series.

Hopping back onto MSPaint to make these was really surreal. Felt just like '08 again.
More to come!

It looks like ~V.2~ is almost whole again! I’m hoping the new comics make the series a bit more comprehensive.

I can not wait to start reading some of these! IT IS TWO OF MY FAVORITE THINGS! SYMBIOTES AND BIONICLE!!! 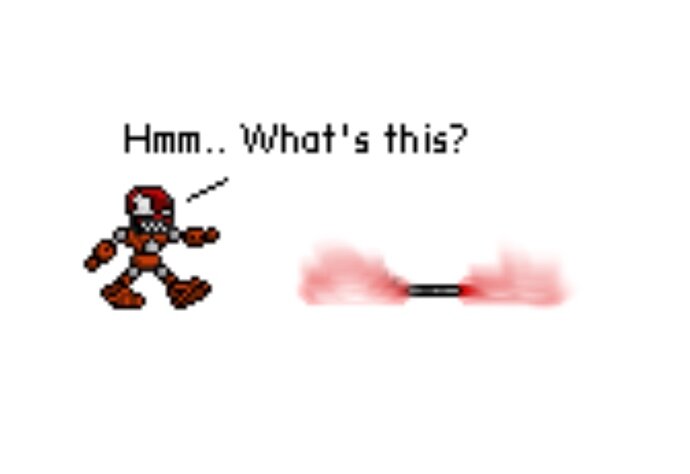 That’s exactly the mindset I had when I first made these comics- nothing but symbiotes and BIONICLE.

Now I know getting through the comics might get a bit confusing or overwhelming, so for you guys that are actually reading through them, here’s a nice little character guide I’ve put together.

You know, I was wondering if one of these existed…

I love this sooo much 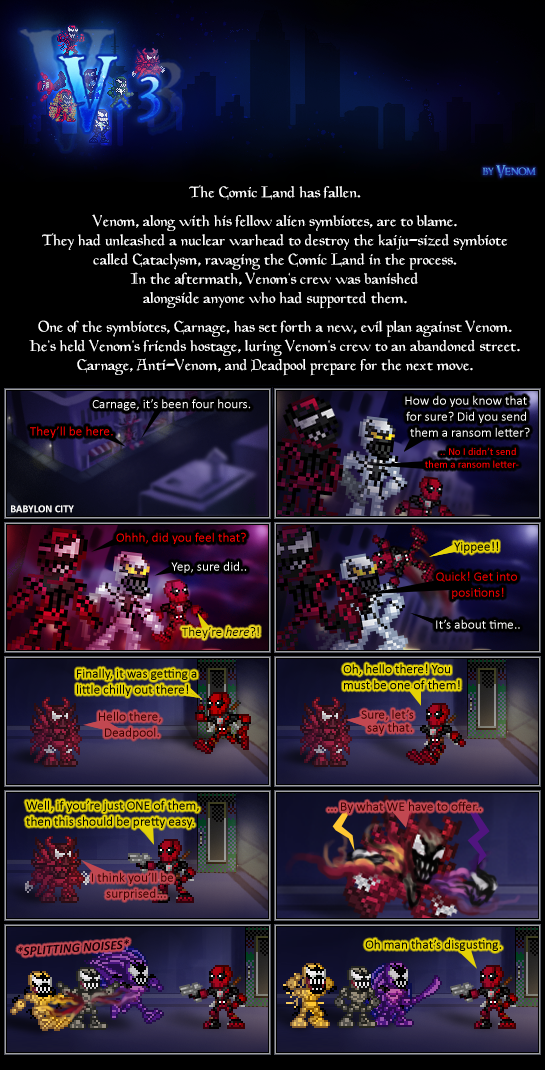 I noticed there were some comics ~V.2~ that didn’t quite make sense or seem appropriate, so I had to replace two of them and fill in some gaps, and I ended up with a short, 5-parter.

Oh, let me know how that goes!

It was pretty alright, actually! Only the one season though, unfortunately. I will say the animation has not aged well though you get used to it, and sometimes the voice acting can be… off, but there are a couple gems in here (Jeffrey Combs and Michael Dorn both have roles, among others I’m likely forgetting).

There are also some pacing issues, especially near the beginning, but it gets better there. I definitely feel some of these stories would have benefited from a slightly longer running time, though. But there’s some good stuff here, anyway, and a lot of what they get away with may surprise you a little.

Given that it was axed, the ending is a little bleak as it was originally intended as a next season hook, but it is still an ending at least. Another thing… it does (especially at the beginning) have some early noughties artsy… quirks, in how it displays things visually, primarily in transitions, and the music is a bit unorthodox - kinda… techno-ish? I wouldn’t really know how to describe the genre, you’d know what I mean if you hear it. Though I got really addicted to the opening theme, sue me

Overall, worth the time in my book.

Hmm, I might check it out sometime. I’m still of the belief that nothing can top Spectacular Spider-Man, but I’ll take your word that this one might be worth checking out. (We should continue in an actual Spider-Man topic)

Anywho, I got some new comics to spew out! 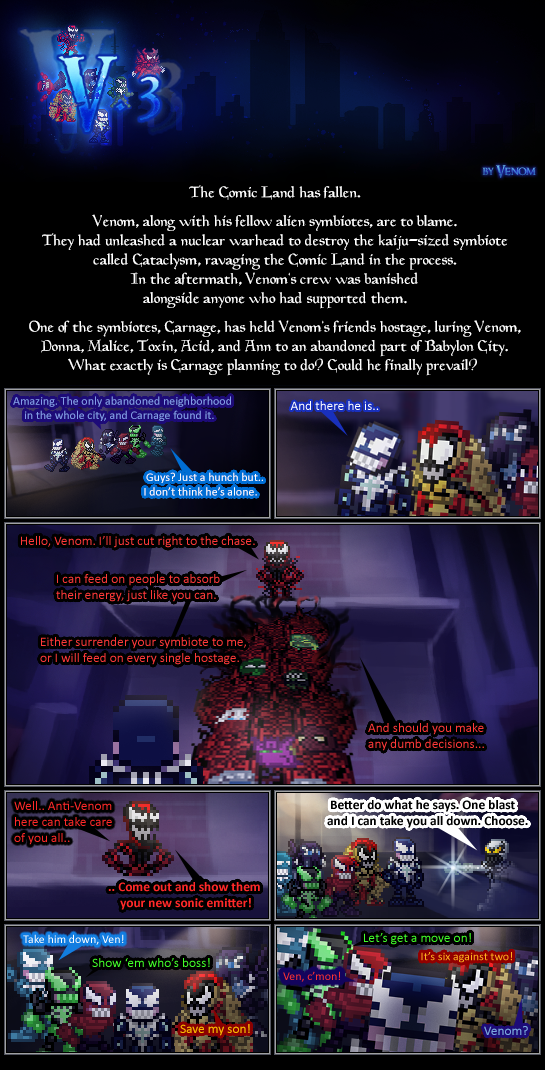 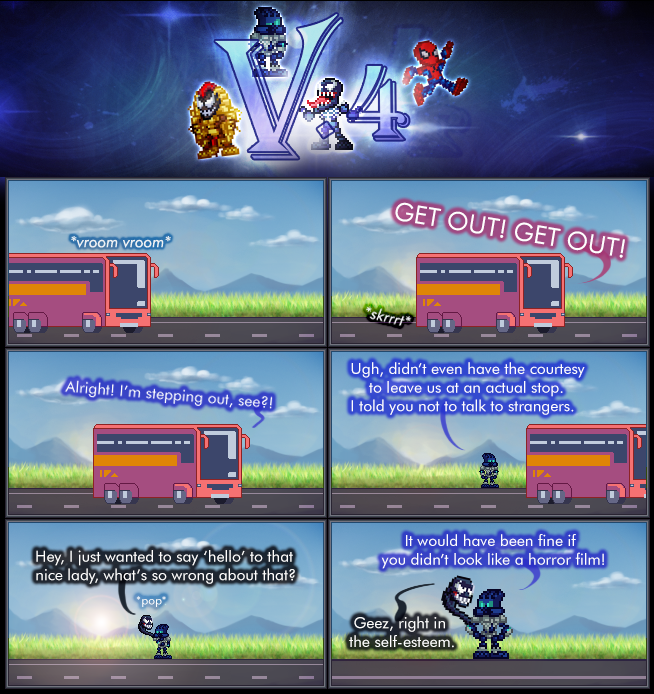 Oh, and just to make it clear, V.4 won’t have anything to do with the original comics.
It’s entirely a brand new, episodic story. Bye.