What books are you currently reading?

That was a good one. My sister hated it for some reason.

I just finished reading The Making of a Mage by Ed Greenwood. It’s one of the El inster novels. I can’t recommend it for all ages but it is quite a good read. Currently working my way through another Forgotten Realms novel, The Sumoning by Troy Denning.

I almost never read for pleasure, but I just finished Mistborn by Brandon Sanderson, and dang, was it good. Definitely in my top three favorite books of all time, and would highly recommend (though there is a fair ammount of content in it so it’s not for everyone).

Just finished Crystal Singer by Anne Mccaffery. Excellent book, and definitely worth a read. It has some “content”, but it’s left to the imagination.

After watching through the Benedict Cumberbatch series, I started reading my Sherlock Holmes collection book that I’ve had for years. Not very far into it, but I like it thus far.

Since this is the closest thing we have to a general book topic.

Anyway, mind telling me the premise?

Since this is the closest thing we have to a general book topic.

Anyway, mind telling me the premise?

Michael Vey is about…well, a boy named Michael Vey. He’s the underdog at school, but he secretly has electrical powers. He doesn’t like the fact that he’s so different from everyone else, until one day, he meets a hot girl who has electrical powers too. They start investigating their powers and why they have them, and they end up in the crosshairs of an evil corporation that wants to take over the world. Once you get into the books, man, are they good.

Alrighty then, sounds worth a check-out.

Have you read the “His Majesty’s Dragon series?”

I should be reading The Cloven Viscount by Italo Calvino

Have you read the “His Majesty’s Dragon series?”

Nope. Never heard of it.

Never heard of it.

Basically, the premise is, “what if humanity always had dragons?”. The series is set during the Napoleonic wars, and both sides have dragons in their ranks. They usually are treated similar to ships with different classes.

In addition, the world is somewhat different as well, especially in the new world. For example, the Inca are still around, as they quite literally had the firepower to beat off the conquistadors. The USA exists, but its a much more even blend between the Native Americans and Colonists.

I read Till We Have Faces for 10th grade, and I think it might be my least favorite Lewis book. The ending was great, yes, but the middle felt a tiny bit bloated. I like the rest of what I’ve read from him, though (Silent Planet, Great Divorce, Screwtape). I still have to finish the space trilogy, though.

I’m about to restart The First Kingdom by Jack Katz (I started reading it last year, but was pulled away from school, so I’m just going back from the beginning).

I only completed the first volume in 2019, but from that, and what I read of the second, it’s a fantastic achievement. The story is set in the future and the further future (via flashbacks) in a world where the nuclear holocaust has led humanity to regress back into cave men, who rebuild society from the ground up. It’s the first graphic novel, and even though it’s completely black-and-white, it looks stunning. 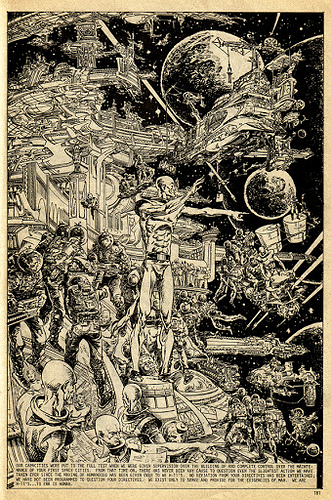 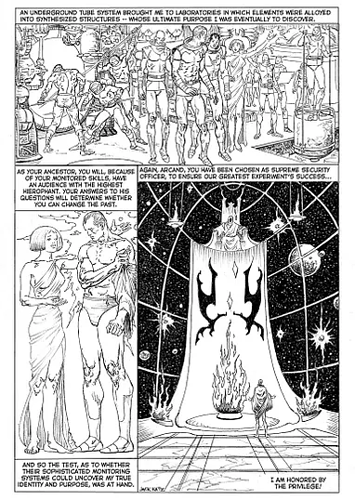 (Keep in mind, this was all done by one guy).

Finally got around to reading The Great Gatsby. My review: it should’ve been called The Overrated Gatsby.

I was so happily surprised to see so much CS Lewis here! I’ve put his Space Trilogy on hold after reading through the first two books, but I think I’ll pick it back up soon. He’s such a masterful writer in so many genres!

As for what I’m currently reading, I started Brandon Sanderson’s Mistborn trilogy again, after having binge-read it for the first time a few months ago. I know he has a reputation for his sweet magic systems, and I was completely floored reading through how it works in his world(s). So now I’m going back through to savor it more.

I’m reading a religious book by CS Lewis called the Screwtape Letters. It approaches demonic influence in a satirical and literarily interesting way, but to a Christian its also intended to be informative. Almost like revealing the enemy’s strategies

That’s a fantastic book. One if my personal favorites of his.

My Library’s copy is cool because it has illustrations, showing Screwtape’s continuing decent into depravity.

Anybody here read the Acorna series of any of Anne Mccaffery’s other series?

My Library’s copy is cool because it has illustrations, showing Screwtape’s continuing decent into depravity.

Oh that’s cool. I’ve seen him get frustrated and stuff but there’s not really enough consistency that I’ve noticed to make it seem like he’s going mad or something

going mad or something

Notice as he goes along, he starts offering wormword to come visit him, and starts refering to him as “delectable”. As it goes along he becomes more and more insistent, and the last few pages become nearly unreadable in his rage. 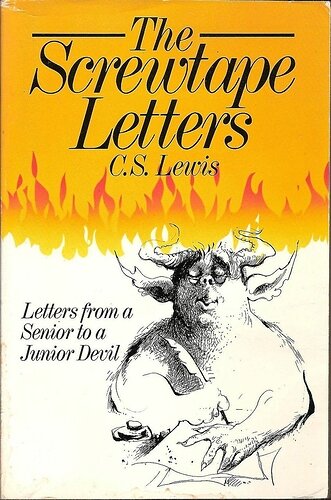 Look for this version, or “the Screwtape Letters: Illustrated” version.

John Cleese (Monty Python, also Nearly Headless Nick in the HP movies) has a great audio version of Screwtape, and I think it’s available on YouTube (read: for free), for anyone interested.